"As regards the gaze, we must not look up or down but stare straight at the letter A. The eyes should not be wide open, as the mind may grasp the A as an external object, nor should the eyes be closed as we may start to doze. We must not blink the eyes or inhibit the flowing of the 'three waters'....We must not lose awareness of the A even for a moment..The mind follows the eyes: when a person looks, the mind passes through the eyes.If we gaze at the A, but our mind wanders someplace else, this is not concentration on the A........"....Wonders of the Natural Mind: The Essence of Dzogchen in the Native Bon Tradition ...Page 82.....By Tenzin Wangyal 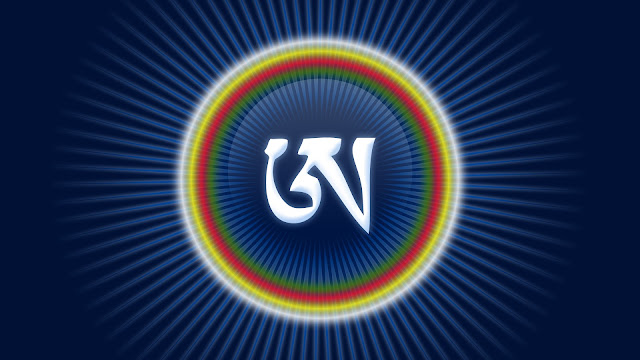 "Sky gazing (Dzogchen)......In both the Bön and Buddhist Dzogchen traditions, sky gazing (Wylie: nam mkha' ar gtad, THDL: namkha arté) is considered to be an important part of tregchöd.......Sky gazing is a practice from the Dzogchen tradition.....the word dzogchen is a Tibetan rendering of the Sanskrit mahasandhi, which can be translated as "great perfection," or "total completeness." ...

"Firstly there is the Dzogchen gaze. The method of Dzogchen gazing disorientates the conceptual mind.....it’s very important to practise the gaze first. You have to do that in order to keep your eyes from seeking forms upon which they tend to settle......In terms of Dzogchen, we train through the senses and the sense-fields rather than through trying to let go of thought. We learn to fix the senses. We keep the senses unmoving in relation to the external world......You would sit by the sea. Or you would sit by a river. You would focus on the surface detail of the water, so that you saw it very clearly and crisply. You would then fix your gaze. You would achieve that by keeping your eyes from moving. The eye muscles habitually track movements by flicking backwards and forwards along the line of movement......You become aware of that darting movement, and you continually attempt to freeze it – to fix your gaze. ......your eyes were not moving. ....This is a specific of many Dzogchen practices..... The impression you would receive would be like a photograph taken at a slow shutter speed. This is one of the best ways to train in fixing the gaze.....The way to train in focusing in space, in terms of Dzogchen, is to learn to feel comfortable when your eyes have no object of focus. This seems challenging at first, but it is by no means difficult. It is, in fact, easier than learning how to fix the gaze. There is a fairly simple method. You stretch out your arm and focus on your index finger. Then, when you have settled your focus, you lower your arm and maintain the gaze. Every time you find your eyes settling on distant objects, simply raise your arm again and re-focus on your finger. You just keep repeating this process until focusing in space becomes a simple muscular reflex.....you develop the ability to fix the gaze and focus in space......you do both at once....".....Aro gTér, a Nyingma terma. It is described in detail in the book moving being, by Khandro Déchen.....http://www.aroencyclopaedia.org/shared/text/s/skumnye_ar_eng.php

"GAZING AS DZOGCHEN ......We look through the mind and we gaze within awareness…becoming aware of awareness is the path of gazing (whether eyes or open or closed)…we can gaze into awareness and we are immediately the field, the field of being. If we look and look for awareness with our mind only blankness arises, a blank state. Sunyata, primordial knowingness is not blankness, it is not blanking out. As we become aware of awareness we enter the gaze, we become the place of the gaze…this gazing from within awareness opens the multidimensionalness….the different dimensions of the field manifest within the gaze, within us. The gaze is both within us and beyond us. Within the gaze, there is neither simple inside nor simple outside. The gaze is place...a vast place beyond inside and outside. There are many forms of gazing. At times we gaze through the eyes of the mind, (heart channels), we can gaze through the entire body, and we can gaze through the heart essence, hridayam. We can gaze through touch, we can gaze through sound, and we gaze through sight. We can gaze into various phenomena…all directly…unmediated…we can gaze into sky, we can gaze into death, we can gaze in the pre-personal, gazing into soma, gazing into the elements, gazing into the dakini, the vortexual, the element of flesh, we gaze into psyche…the gaze itself is psyche, not mind. Gazing both leads to and is gnosis, jnana…direct perception. Togal, the leaping over practice, is not simply gazing into the sky - although sky gazing is its cultural and historical elaboration. If you wish to live in gnosis then gaze…gazing is the most direct of methods…Detailed instructions on the gazing methods of Dzogchen are generally secret and protected."....Written by: Rudolph Bauer, Ph.D.....Transmission: Journal of the Awareness Field Journal of the Washington Center for Consciousness Studies......http://transmissiononline.org/issue/the-awareness-of-awareness/article/gazing-as-dzogchen

" In Dzogchen, there are three kinds of space that we can talk about. There's the ordinary, dualistic outer space in which things exist. In relation to the practice of Trekcho practice, there are two other types that are discovered. There is also the inner space of the mind where thoughts etc. are experienced as being without any kind of actual 'place' of appearing or thing that creates them. This is inner ying - nang ying (nang dbyings). The outer space has a similar nature, where there is no fixed place to things that arise and they are not solid or within any kind of objective frame of reference. Basically, there's no place they arise, stay or disappear - similar to the nature of the mind. This is outer ying - chos ying.".... http://www.dharmawheel.net/viewtopic.php?t=4234

"Greek....atenizó: to look fixedly, gaze......Original Word: ἀτενίζω.....Part of Speech: Verb.......Transliteration: atenizó......For Plato, the contemplative vision of the philosopher, a "perception" of the absolute Good and the absolute Truth, can initially be understood, however, only in terms of an analogy that depends on an understanding of the perception of sensuous Forms (Republic , book VII, 532). Unlike the worldly knowledge we achieve with eyes still attached to the earth, the knowledge achieved by the philosopher's gaze is a knowledge free of images, shadows, reflections: it is a knowledge free of all sensuous and material limitations, and it is a knowledge free of perspectivism and its "distortions," grasped all at once and once and for all (book VI, 500–11)....The analogy of the sun is found in the sixth book of The Republic (507b–509c), written by the Greek philosopher Plato..... Socrates reveals this "child of goodness" to be the sun.....The sun is a metaphor for the nature of reality and knowledge concerning it."

"Kum Nye is a morning exercise designed for strength, endurance and focus. Clear focus opens your awareness and allows you to overcome your obstacles. Strength improves inner health and vitality while endurance increases your energy levels. Taking as little as 20 minutes, Kum Nye gives you a complete workout, increasing your fitness, flexibility and vitality. In this form of Kum Nye, a series of 8 positions are held while using specific breathing patterns. Whether you are inactive or athletic you can perform the positions within your own ability and experience positive results........Stephanie Wright is the author of "Kum Nye, Waking up for Beginners". ....Tibetan Dur Bon Medicine is an ancient traditional medical system with its roots in central Asia and Siberia before it became established across Pre-Buddhist Tibet......http://www.stephaniewright.co.uk/tibetan_dur_bon_medicine/

"Kum Nye and sKu-mNyé are a wide variety of Tibetan religious and medical body practices. The two terms are different spellings in the Latin alphabet of the same Tibetan phrase (Wylie: sku mnye), which literally means "massage of the subtle body". Some systems of sku mnye are vaguely similar to Yoga, T'ai chi, Qigong, or therapeutic massage. "Kum Nye", Ku Nye, and Kunye are also used to transcribe the Tibetan phrases dku mnye ("belly massage") and bsku mnye ("oil massage"), which are pronounced identically to sku mnye. dKu mnye and bsku mnye manipulate the physical body, rather than the subtle (energetic) one......Systems of Kum Nye are found in many Tibetan Buddhist and Bön traditions. These can be entirely different both in purpose and in methods. For instance, some forms are very slow moving; others are intensely aerobic. Some systems are based in the Tibetan Medical Tantras (scriptures), and are mainly therapeutic. Other systems are based in Dzogchen, and are mainly religious in purpose.......Three systems of sku mnye have been described and taught in detail in English. These are Tarthang Tulku's Kum Nye, the Aro gTér sKu-mNyé and the Bön system taught by Stephanie Wright. Systems of bsku mnye are taught by the International Academy for Traditional Tibetan Medicine and the Shang Shung Institute."......

Proverbs......4-25........"Let thine eyes look right on, and let thine eyelids lock straight before thee. "To look right on" and "to look straight before one" is to fix the eyes steadily and unswervingly upon an object before them, not to allow the gaze to deflect either to the right hand or to the left. As a noun, the word nokakh, rendered "right on," signifies what is straight in front of one; adverbially, it has the same meaning as that given in the Authorized Version. The corresponding "before" (neged) is substantively the side of any object which is opposite one, and as a preposition is equivalent to "before," "in the presence of," like the Latin coram. The versions (LXX., Syriac, Targum) take nokakh in the sense of "right things:" "Let thine eyes look at right things;" contemplate them, aim at justice and equity. This meaning is given to the cognate adjective nakoakh in Proverbs 8:9; Proverbs 24:26; Isaiah 26:10; Isaiah 30:10; Isaiah 59:14; but in the Proverbs the word nokakh only occurs twice (here and ver. 21), either as an adverb, "right on," "straightforwardly," or as a preposition, "before." Look straight. Gesenius takes this verb yashar in hiph., "to make straight," as used elliptically: "Let thine eyelids direct a way before thee;" but the meaning is the same as "Let them look straight before thee." The Syriac, Gejerus, and Holden render, "Let thine eyelids direct thy way before thee;" i.e. do nothing rashly, but everything with premeditation; examine thy conduct, and see that it is right. The verb yashar has this meaning, "to direct," in Proverbs 3:6; Proverbs 11:5, but it is here used intransitively (Mercerus). Eyelids (aph'appim); so called from their fluttering, rapid motion, here used by way of poetic parallelism with "eyes." What the command inculcates is simplicity of aim or principle, singleness of motive. The moral gaze is to be steadily fixed, because if it wanders indolently, lasciviously, aimlessly, it imperils the purity of the soul. This verse may be understood, as Zockler, as containing a command levelled against dishonest practices. The man who intends to cheat his neighbour looks this way and that how he may deceive him. Such an interpretation may be maintained on the ground that the former verse is directed against falsehood in speech; this against falsehood in action. But the former view is preferable. If you wish to keep the heart, you must be guided by simplicity of aim; look not aside either to the one hand or to the other, lest you may be led astray by the seductions and temptations which imperil the onward and upward progress of the soul. The passage reminds us of the "single eye" (ἄπλους), "simple," i.e. intent on heaven and God, of Matthew 6:22.".....The Pulpit Commentary, Volume 4......(1880 AD)......By Spence-Jones, Henry

Posted by OkarReview at 1:37 AM