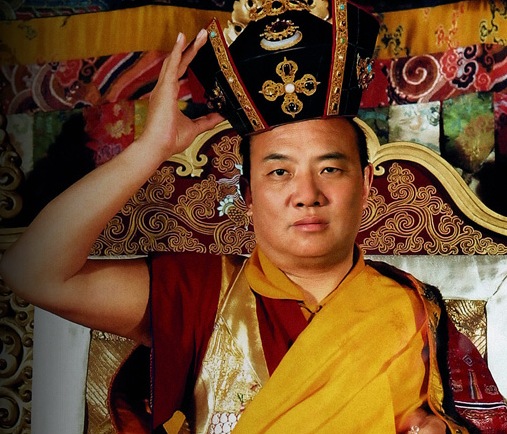 The sixteenth Gyalwa Karmapa, Rangjung Rigpe Dorje (August 14, 1924 – November 5, 1981)..... spiritual leader of the Karma Kagyu lineage of Tibetan Buddhism. He was born in Denkhok in the Dergé district of Kham (Eastern Tibet), near the Yangtze River.

The Black Crown (Tibetan: ཞྭ་ནག་, Wylie: zhwa nag) is an important symbol of the Karmapa, the Lama that heads the Karma Kagyu school of Tibetan Buddhism. The crown signifies his power to benefit all sentient beings. A corresponding crown, the Red Crown, is worn by the Shamarpa. The Tai Situpa wears a red crown as well, whereas Goshir Gyaltsab wears an orange crown.

Legend tells that in a previous eon, in a former life as an accomplished yogi, the Karmapa attained the eighth level or bhumi of the bodhisattvas. At this time, 100,000 dakinis (female buddhas) manifested their hair as a crown, and offered it to the Karmapa as a symbol of his accomplishment.

The Karmapas were traditionally the teachers of the successive Ming Dynasty Emperors of China. When the 5th Karmapa, Dezhin Shegpa, met the Chinese Emperor Yung Lo, the Emperor, through his devotion and spiritual realization, was able to perceive Karmapa in the Sambhogakaya form of Vajradhara (Tib. Dorje Chang), wearing a black crown on his head. The Karmapa explained to the Emperor that he could see the 'Vajra Crown', the power-field of wisdom-energy that always stays above the Karmapa's head. The emperor offered to have a physical replica made so that others could receive its blessing. 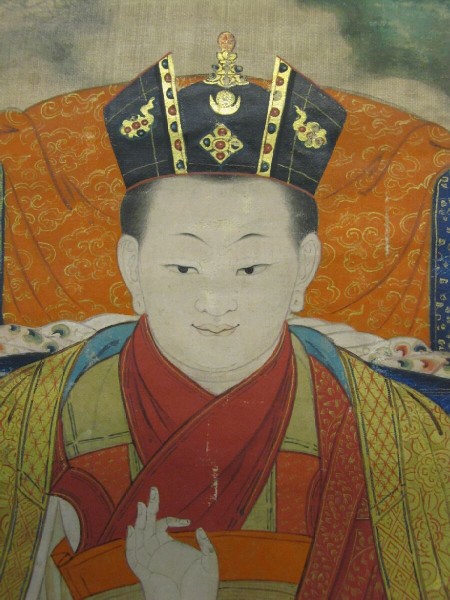 Wangchuk Dorje (1556–1603) was the ninth Gyalwa Karmapa, head of the Kagyu School of Tibetan Buddhism.

A crown encrusted with precious stones and topped by a huge ruby was commissioned, and using this, the 5th Karmapa started the tradition of the Black Crown Ceremony which was performed by successive Karmapa incarnations up to the time of the 16th Karmapa, Rangjung Rigpe Dorje.

The Black Crown Ceremony..... In preparation for the ceremony the Karmapa meditates to become inseparable with Chenrezig, the Buddha of Compassion. A mandala offering is made, followed by the seven branch prayer. This is to accumulate good impressions for the ceremony that ensues. The Karmapa then places the crown on his head while reciting the mantra 'Om Mani Peme Hung', transmitting blessings to each participant in the ceremony to the extent that they are capable of receiving them. It is said that by merely seeing of the Black Crown during the ceremony, one will become the first bhumi bodhisattva within three lifespans. This is one of the key reasons why the Black Crown is so important to the Karma Kagyu lineage.

Recent developments..... In the early 1960s, the 16th Karmapa brought the Black Crown and other valuable relics of the Kagyu lineage to Rumtek monastery in Sikkim. They remained there in safekeeping until 1993 following the 16th Karmapa’s death. The ensuing split in his lineage caused a conflict at the monastery between supporters of the two rival claimants for the title of Karmapa. Since that time, it is said that many valuable items have disappeared from the cloister. On July 5, 2004, the Indian Supreme Court delivered a final judgement to grant Rumtek monastery to the Karmapa Charitable Trust, principal supporters of Thaye Dorje, one of the rival candidates for the title of 17th Karmapa. The Crown that Liberates When Seen of the Karmapas is stored today in Rumtek Monastery, in Sikkim, northern India.

Posted by OkarReview at 2:33 AM