Brag-srin-mo......The ancestral goddess of Tibet. She mated with a monkey and bore six children who. Those children were fed a special food, causing them to shed their tails and fur and thus becoming the first Tibetans.....Brag-srin-mo is a Tibetan name for girls meaning The Ancestral Goddess of Tibet. 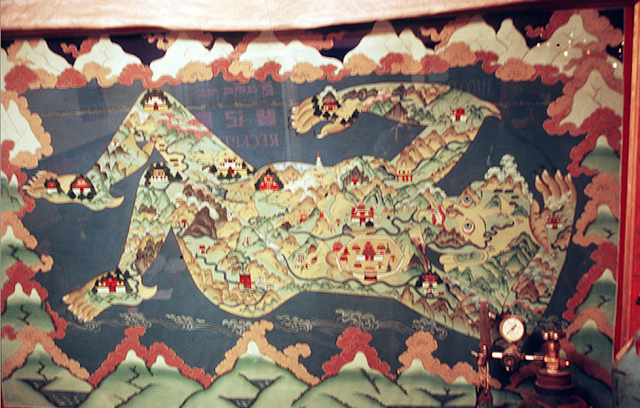 "Among the many representations of pre-Buddhist deities that in the later Tibetan tradition turn into protectors of the Buddhist Dharma, a primary role is played by the terrific female demon called srin mo (‘demoness’). In singular or plural form, she traverses all the different periods of Tibetan religious life, performing a central role in folklore and literature as well, and reveals an outstanding vitality in her various transformations."..... THE SRIN MO DEMONESS AND HER SUBMISSION TO THE BUDDHIST TIBETAN DHARMA by Carla Gianotti 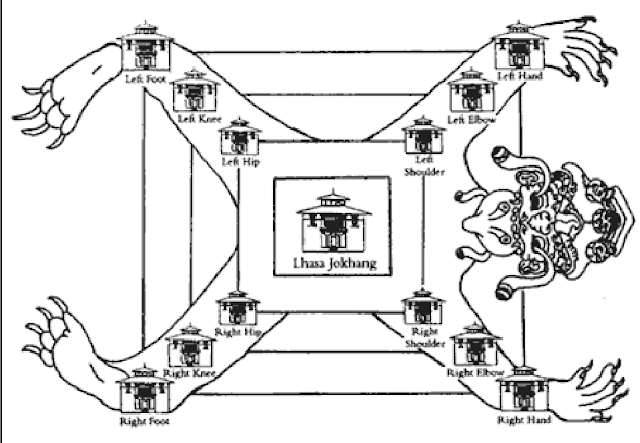 ".....the earth goddess Srinmo and the history of the origin of Tibet.....In the period before there were humans on earth, the Buddha being was embodied in a monkey and passed the time in deep meditation on the “Roof of the World”. There, as if from nowhere, a rock demoness by the name of Srinmo appeared. The hideous figure was a descendent of the Srin clan, a bloodthirsty community of nature goddesses. “Spurred on by horniness” — as one text puts it — she too assumed the form of a (female) monkey and tried over seven days to seduce Avalokiteshvara. But the divine Bodhisattva monkey withstood all temptations and remained untouched and chaste. As he continued to refuse on the eighth day, Srinmo threatened him with the following words: “King of the monkeys, listen to me and what I am thinking. Through the power of love, I very much love you. Through this power of love I woo you, and confess: If you will not be my spouse, I shall become the rock demon’s companion. If countless young rock demons then arise, every morning they will take thousands upon thousands of lives. The region of the Land of Snows itself will take on the nature of the rock demons. All other forms of life will then be consumed by the rock demons. If I myself then die as a consequence of my deed, these living beings will be plunged into hell. Think of me then, and have pity” ....With this she hit the bullseye. “Sexual intercourse out of compassion and for the benefit of all suffering beings” was — as we already know — a widespread “ethical” practice in Mahayana Buddhism. Despite this precept, the monkey first turned to his emanation father, Amitabha, and asked him for advice. The “god of light from the West” answered him with wise foresight: “Take the rock demoness as your consort. Your children and grandchildren will multiply. When they have finally become humans, they will be a support to the teaching” .....Magic and Religion of the Tibetans.....M. Hermanns, 1956, p. 32).

"J. Gyatso in “Down With the Demoness: Reflections on a Feminine Ground in Tibet”, 1989, a work that still remains, as far as I know, the best starting point for a comprehensive analysis on the demoness srin mo."...Carla Gianotti 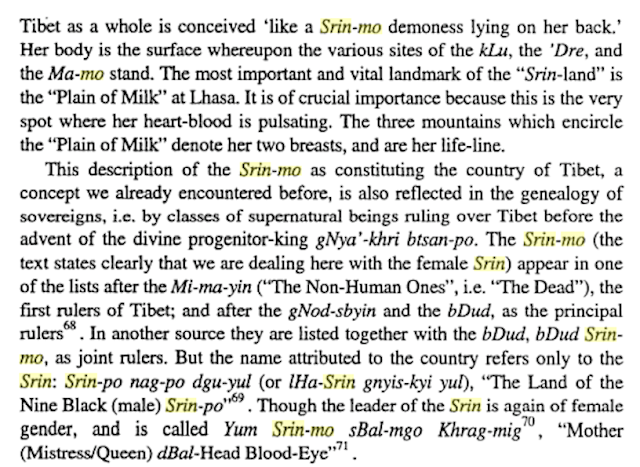 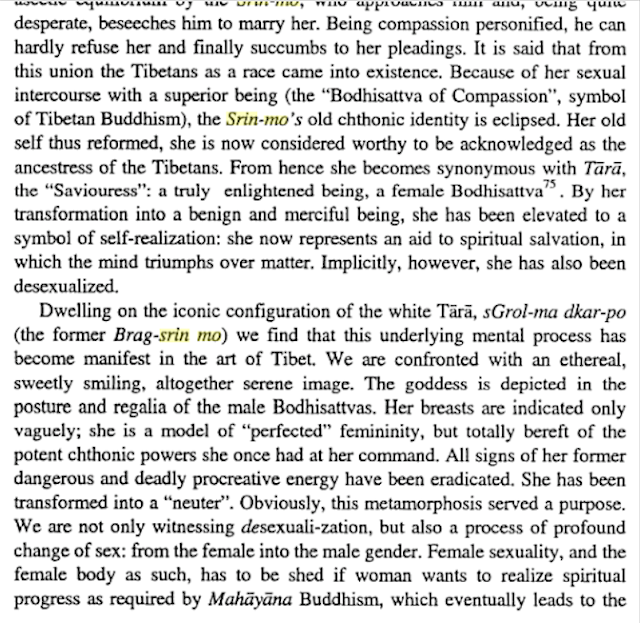 "Changzhug was one of twelve geomantic temples, the Tadül "Border Subduers" (Tibetan: མཐའ་འདུལ་, Wylie: mtha' 'dul) and Yangdül "Further Taming [Temples]" (Tibetan: ཡང་འདུལ་, Wylie: yang 'dul), that were built to hold down the huge supine ogress (Tibetan: སྲིན་མོ་, Wylie: srin mo, Sanskrit: राक्षसि rākṣasi)".... this monastery was built in the seventh century and has been repaired in various historical periods. A legend says after Songtsan Gambo established its capital in Lhasa, he came and stayed here together with Princess Wen Cheng who planted the willow trees around the monastery."

"Trandruk Temple (khra 'brug lha khang), one of the earliest Buddhist temples, in Tsetang. It was said to have been built by the Tibetan emperor Songtsan Gampo (srong btsan sgam po, r. 617-650) as one of the so-called demon-taming temples. These temples were built to pin down the supine demoness (srin mo) whose body was mapped across the Tibetan landscape and who was said to be preventing the Chinese Princess Wenchen from bringing the famous statue of the Buddha Shākyamuni (jo bo shA kya mu ni), later installed in the Jokhang, to Lhasa. The Tradruk Temple was the stake that pinned down the demoness' left shoulder.".....http://www.treasuryoflives.org/ 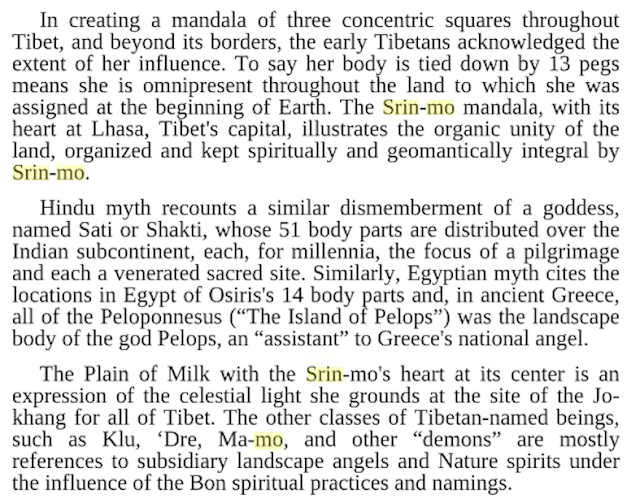 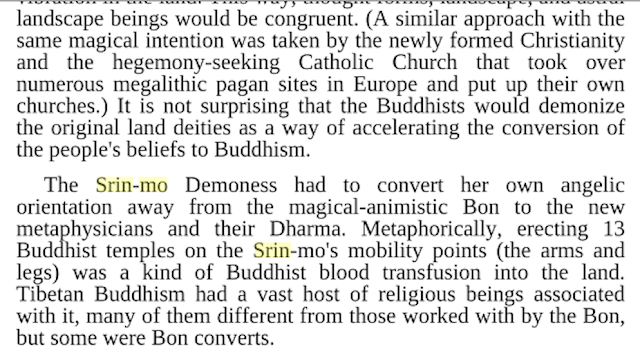 "....Srin mo do.....The geomantic heart of gNam mtsho is an island variously called Sri mo do, Srin mo do, Se mo do and Nang do. Srin mo and Sri mo refer to the pre-Buddhist class of deities mentioned in conjunction with the mythology of the Divine Dyad. Se mo is probably a corruption of Srin mo, but if it is a valid spelling it must denote the Zhang zhung language word for 'old woman', an obsolete term....Nang is defined as inside or inner, and refers to the innermost place that the island occupies in the sacred geography of gNam mtsho..... As in other regions of Tibet, srin mo generally have negative connotations for the 'brog pa and are equated with cannibalistic demons. Although, as we have seen, the srin mo was an important component of cosmogonic myths, it is now essentially one and the same as the man-eating Indian rakshasani......We have already met Srin bdag tsun mo, a cosmogonic goddess, and the srin mo progenitor of the Tibetan race, the primitive lha srin and the srin of the royal foundation myths. In these examples, the srin mo is a divinity and not a frightening demonic figure. Her status was transformed into the inauspicious character of the rakshasani with the advent of Buddhism.".....Srinmo by John Vincent Belezza......Devine Dyads Ancient Civilization in Tibet 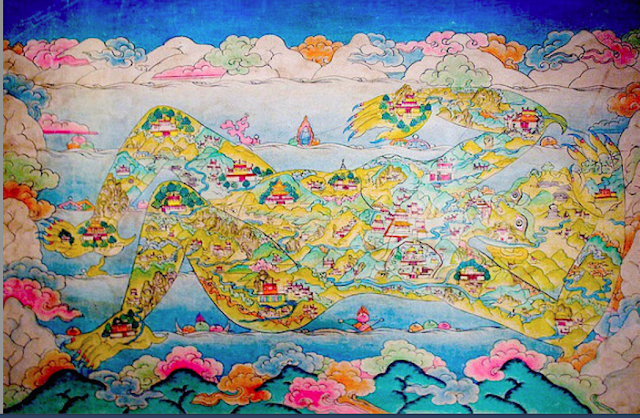 "51 Shakti Pithas......Shakti Peethas are shrines or divine places of the Mother Goddess. These are places that are believes to have enshrined with the presence of Shakti due to the falling of body parts of the corpse of Sati Devi, when Lord Shiva carried it and wandered throughout Aryavartha in sorrow. There are 51 Shakti Peeth linking to the 51 alphabets in Sanskrit. Each temple has shrines for Shakti and Kalabhairava, and mostly Shakti and Kalabharava in different Shakti Peeth have different names....."Shakti" refers to the Goddess worshipped at each location, all being manifestations of Dakshayani, Sati; later known as Parvati or Durga;...."Bhairava" refers to the corresponding consort, each a manifestation of Shiva;....."Body Part or Ornament" refers to the body part or piece of jewellery that fell to earth, at the location on which the respective temple is built...... According to the Pithanirnaya Tantra the peethas are scattered all over India, Sri Lanka, Bangladesh, Nepal, Tibet, Bhutan and Pakistan....