"The Valley of Kashmir is well known throughout the world for its natural beauty. Here nature has been prodigal enough in crowning this ancient land with all its splendour and glory. Gulmarg, Pahalgam and Mughal gardens attract visitors from all over the world. Its lakes, green meadows, dancing and foaming streams, majestic forests full of fir and pine, snow-capped peaks are common attractions to the outsider as well as to the native......Besides this, the valley being sacred and called Rishi wari till now, abounds in sacred places, Tirthas and Asthans. Long ago at the dawn of civilisation when the sons of Rishi Kashyapa from plains came to settle here they brought with them their traditions, religion, mythology etc. These early settlers named the confluence of river Sindh and river Jhelum as Prayag, equal to holy Prayag at the confluence of the Ganga and the Jamna in India. They named the tallest mountain peaks here after their Gods and deities such as Brahma, Vishnoo and Mahadev. These settlers must have felt surprised to see the hide and seek of water in the Spring of Trisandya; melting of snow around the spring of Bedaba Devi and other marvellous places. With the passage of time, these places became Tirthas or places of worship and have continued so up to the present time. The tradition being like this R. L. Stein who has translated Rajatarangini into English writes, "Kashmir is a country where there is not a place as large as a grain of seasame without a Tirtha. Time and conversion to Islam of greater portion of population has changed but little in this respect. " Pandit Kalhana while writing introduction to Rajatarangini names the miraculous springs of Trisandya Saraswati lake on the Bheda hillock, Self created fire at Soyambhu."......http://ikashmir.net/temples/ 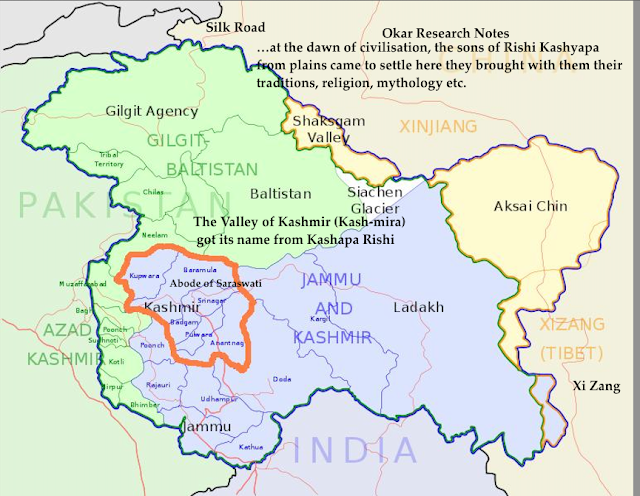 "The Valley of Kashmir (Kash-mira) got its name from Kashapa Rishi....According to the Vedic Knowledge, the Kashmir valley was a vast lake called Satisaras, named after Sati or Parvati the consort of Shiva. The lake was inhabited by the demon Jalodbhav. The Nilamat Puran of the 7th century mentions the region being inhabited by two tribes — the Nagas and the Pisachas. The lake was drained off by leader of the Nagas called Ananta (Anantnag region of Kashmir is named after him) to capture and kill the demon. Ananta later names the valley as Kashapa-mira after his father Kashapa. Kalhana in Rajatarangini (The River of Kings) also mentions Prajapati Kashapa killing Jalodbhava with the help of Brahma, Vishnu and Shiva. The lake was then drained and comes to be known as Kash-mira after the Rishi Kashapa.".... Kaw, M.K. (2004). Kashmir and its People: Studies in evolution of Kashmiri Society. 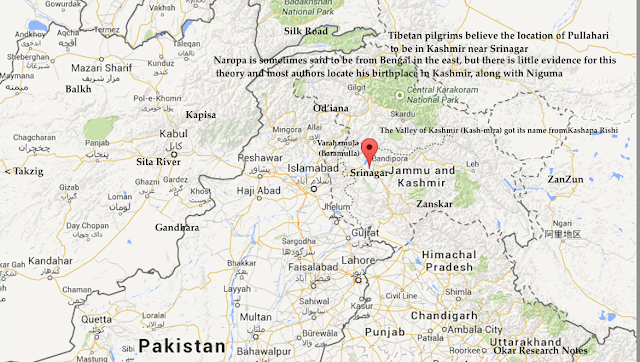 "In November 1890, M. A. Stein came to Zaillapura from Anantnag, whence he moved to Chitragam. A Brahmin of Hawal, Pulwama, met Stein enroute. The latter asked him if he knew anything about the tirtha of Bheda Devi. The Brahmin showed his willingness to guide Stein and his party to the spot. As they reached Hawal, Stein set up his camp there and was then led by the Brahmin to the nearby small temple called Beeda-bal. He consulted his maps and also studied carefully the statement of Kalhana about the forgotten tirtha; he was not satisfied that he had got to the exact place he was in search of. However, he paid some money to the Brahmin and rested for the night at the camp in Hawal. On the following day, a gujjar named Khaira, who visited the camp, informed Stein (on being questioned by him) that the place he wanted to explore was about twenty kilometers away from Hawal, within a forest. Led by Khaira, Stein reached the spot, which the gujjars called Bujbrore. He was fully satisfied, in fact convinced that the site he had been guided to was the abode of Saraswati (though now in a disguised form)."...The Forgotten Tirtha of Bheda Devi...by Arjan Dev Majboor

"High up in the valley of the Birnai Stream which debounches at Darbagam from the south west, is the site of an ancient tirtha, which though not completely forgotten, must have ranked once among the most popular in Kashmir. In Kalhana's introduction there is named along with 'Trisandheya' Suyambhoo. Sarda and other famous sites, the Hill of Bheda (Bheda Giti) sanctified by the 'Gangod-bheda' spring. There the Goddess Saraswati was believed to have shown herself as a swan in a lake situated on the summit of the hill.".....Rajtarangini by Kalhana 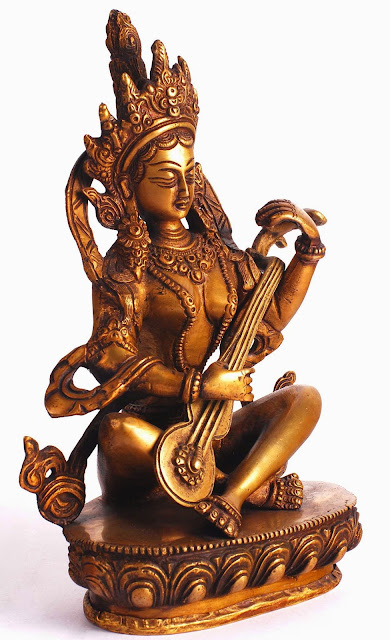 "Saraswati (Sanskrit: सरस्वती, Sarasvatī ) is the Hindu goddess of knowledge, music, arts, wisdom and nature. She is a part of the trinity of Saraswati, Lakshmi and Parvati. All the three forms help the trinity of Brahma, Vishnu and Shiva in the creation, maintenance and destruction of the Universe. The Goddess is also revered by believers of the Jain religion.....The Sarasvati River is an important river goddess in the Rigveda. ... is another form of Mahavidya Tara. There are separate dhyana shlokas and mantras for her worship in Tantrasara......The goddess Saraswati is often depicted as a beautiful woman dressed in pure white, often seated on a white lotus, ....There are many temples, dedicated to Saraswati around the world....." 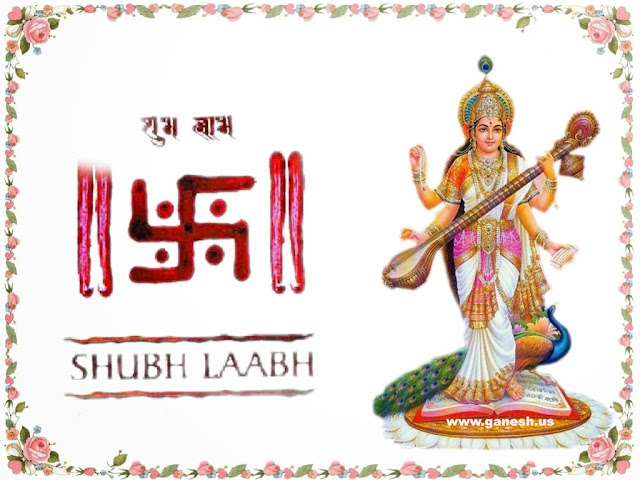 "Anāhitā & Saraswati..... The proper name of the divinity in Indo-Iranian times, H. Lommel has argued, was Sarasvatī, “she who possesses waters” (“Anahita-Sarasvati,” Asiatica, Festschrift F. Weller, Leipzig, 1954, pp. 405-13). She was still worshiped in Vedic India by this name, which was also given there to a small but very holy river in Madhyadeśa. In its Iranian form (*Harahvatī), her name was given to the region, rich in rivers, whose modern capital is Kandahar (Av. Haraxᵛaitī-, OPers. Hara(h)uvati-, Greek Arachosia); originally *Harahvatī seems to have been the personification of a great mythical river which plunges down from Mt. Harā into the sea Vourukaša and is the source of all the waters of the world."....http://www.iranicaonline.org