"Naropa is sometimes said to be from Bengal in the east, but there is little evidence for this theory and most authors locate his birthplace in Kashmir, along with Niguma.....Naropa’s well-known hermitage of Pushpahari, or Pullahari, commonly identified as being on a hillock west of Bodhgaya, may have been in Kashmir.......Tsadra Foundation

"Naropa, known as Abhayakirti (‘jig med grags pa) Jnanasiddhi, was born in Kashmir into the Brahmin caste, according to Taranatha and other sources, who say that he was born in a place called Jambu (Shrinagar, according to Guenther)..... His father was Shantivarman and mother, Shrimati.....Naropa was born into a noble family of Pullahari, in Kashmir, in 1016 AD.".....According to the story of Naropa's life, he deserted home and went to the main monastery of Kashmir for ordination. There he was ordained as a novice monk (sramanera) in the Sarvastivada order of Buddhism and engaged himself in scholastic studies for the next three years. Kashmir, at this time in history, was famous as a place of great learning and science.....Naropa renounced the life of a monk and become a white clad yogi in Tilopa's tradition. After his Enlightenment, Naropa returned to Pullahari........http://www.dharmafellowship.org 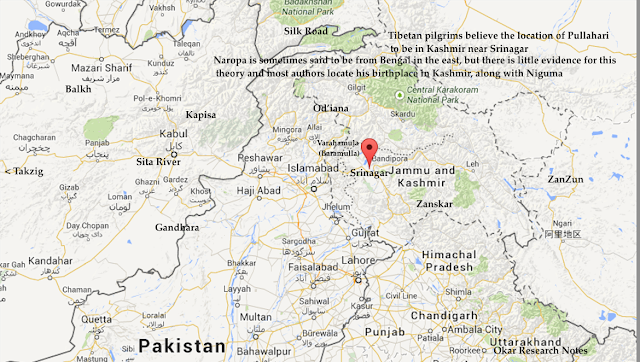 " .....in his translation of the Blue Annals, George Roerich notes that modern Tibetan pilgrims believe the location of Pullahari to be in Kashmir near Srinagar. And more interestingly, the colophon to Tilopa’s Esoteric Instructions on the Six Yogas (Chos drug gi man ngag) states that it was translated by Naropa and Marpa in Pulihpahari in the place of the Moslems (kha che’i gnas), again referring to Kashmir ."....Tsadra Foundation

"According to 'The Wand that Opens the Eyes and Dispels the Darkness of Mind' (the abridged collection of biographies of the successive Gyalwang Drukpas), Naropa was born around AD 956 and passed away around AD 1050. However, other sources record him as living between AD 1016 and 1100....At the age of 8 he journeyed to Kashmir (one of the main seats for Buddhist studies in historical times) in order to study with the master Gaganakirti. It was from Gaganakirti that he received his lay ordination.Naropa remained in Kashmir for three years, learning Buddhist teachings and philosophies from many great masters.... Naropa was forced by his parents to marry a lovely Brahmin girl, Vimaladipi (also known by her caste name, Niguma). .... she served Naropa when he lived in Pullahari, Kashmir. After the divorce, Naropa went to the hermitage of Anandarama, where he was ordained as a novice by Abbot Buddhasarana and the guru Jnanaprabha, with whom he stayed for three years, mastering various Mahayana and Tantrayana philosophies. He then stayed in Pullahari for six years..... Naropa taught in many places and had numerous disciples, especially in Kashmir and Zanskar where he established many monasteries....(Zanskar is a subdistrict of the Kargil district, which lies in the eastern half of the Indian state of Jammu and Kashmir. The administrative centre is Padum.."....https://www.gyalwadokhampa.org

"The earliest biographies of Naropa, such as that of Gampopa (1079-1153) and Lama Zhang (1123-1193), do not name a specific birthplace other than simply “the west.” All accounts of Naropa include the story of a dakinı appearing to him and telling him to “go east” to find his guru Tilopa, which really only makes sense if he is somewhere in the west. In The Life Story of the Supreme Learned Naro Pa˚chen, which claims to have compared five different biographies, Sangye Bum gives his birthplace as the “land of Moslems” (kha che’i yul), almost universally interpreted to mean Kashmir. (Note: Moslems gained control of Bactria in 850 AD and Kashmir in the 14th century). In case this is not clear, Karmapa Rangjung Dorje (1284-1339) specifies “ka smi ra”, transcribing the Indian “Kashmir” as nearly as is possible in Tibetan in his version of the life story..... Kachö Wangpo (1350-1405) is even more specific, saying: “In the east of India, the town of Jammu (‘Dzam bu) in Srinagar (Sri na ga ra), a district of Bha ga la.” Srinagar and Jammu are easily identified in the south-eastern part of the Kashmir valley, but “bhagala” is not so clear. The biography by Lhatsun Rinchen Namgyal (1473-1557), which was translated by Herbert Guenther in The Life and Teaching of Naropa, is a verbatim copy of Kachö Wangpo’s, a very common practice in Tibetan literature where plagiarism is truly the highest form of flattery. Dorje Dze-ö ‘s biography of Naropa, translated by Khenpo Könchog Gyaltsen in The Great Kagyu Masters, has the same information. It seems that it is only in the inexplicable identification of the Tibetan transliteration “Bha-ga-la” as “Bengal” in these two translations (despite the obvious reference to Srinigar and Jammu) that Naropa has been widely viewed in the western world as Bengali. But later Tibetan authors such as Taranatha have upheld Kashmir as his birthplace. One last twist to this research is that Sangye Bum’s description of “the land of Moslems”, identical to the one in Niguma’s life story, adds that it is also called “Kosala”! .... This ancient kingdom where the Buddha Shakyamuni spent most of his teaching life is nowhere near Kashmir or Bengal, but somewhere in the middle. This seems to come out of nowhere and I have no explanation for it. On Naropa’s birthplace see also Templeman, The Seven Instruction Lineages.".....Tsadra Foundation

"The Dakini Niguma’s place of birth was the Kashmiri city called “Incomparable.” Her father was the brahman Santivarman (Tib.: Zhi ba’i go cha). Her mother was Shrımati (dPal gyi blo gros ma). Her real name was Srıjñ›na (dPal gyi ye shes)..... a reportedly historical woman such as Niguma,.... her birthplace is known to be in Kashmir, a hub of Buddhist activity, particularly of the tantric type, and probably in close quarters with the Shaivite tradition and other forms of esoteric Hinduism. The specific town, or perhaps monastery, is called Peme (dpe med) in Tibetan, meaning “without comparison,” translating Anupama.....Niguma’s family relationships are similarly slippery, particularly when it comes to her connection with Naropa (956-1040), her contemporary and a great adept whose teachings on the six dharmas learned from Tilopa spread widely in Tibet. The names of her parents given above by Taranatha are indeed the same as those of Naropa in his biography in the Kagyu Golden Rosary by Lhatsun Rinchen Namgyal and are similar in other biographies...... Naropa is sometimes said to be from Bengal in the east, but there is little evidence for this theory and most authors locate his birthplace in Kashmir, along with Niguma.....Naropa’s well-known hermitage of Pushpahari, or Pullahari, commonly identified as being on a hillock west of Bodhgaya, may have been in Kashmir....After attaining his first realization of mahāmudrā under Maitrıpa, Marpa returned to Nāropa. This time, Nāropa sent Marpa to receive teachings from Niguma, Wisdom (Jnāna) Dākinī Adorned with Bone ornaments. She was Nāropa’s wife before he renounced worldly life to enter the dharma, and later she became his student and consort. Finally, she became a great teacher herself and her lineage of teachings was taken to Tibet (though not by Marpa) and continues to this present day. Unfortunately, our story here does not tell us very much about their meeting (xliii).....both Marpa’s dakini and Khyungpo Naljor’s Niguma can sometimes both be found in the same great cemetery of Sosadvıpa (Tib. Sosaling), said to be just to the west of Bodhgaya.....the commonly-held belief that Niguma received the six dharmas from Naropa seems to be unsubstantiated......Tsadra Foundation

"Marpa: First meeting with Naropa at Puṣpahari.... ....Marpa went to Nepal, stayed for three years, then went on to India, where he met Naropa at Puṣpahari (a.k.a. Pullahari, near Nālandā, though thought by some later Tibetans to be in Kashmir), and he was initiated into the Hevajra Cycle (among others).".....Summary of The Blue Annals Chapter 8: The Dakpo Kagyüpa Traditions Descending from Marpa.....https://collab.itc.virginia.edu 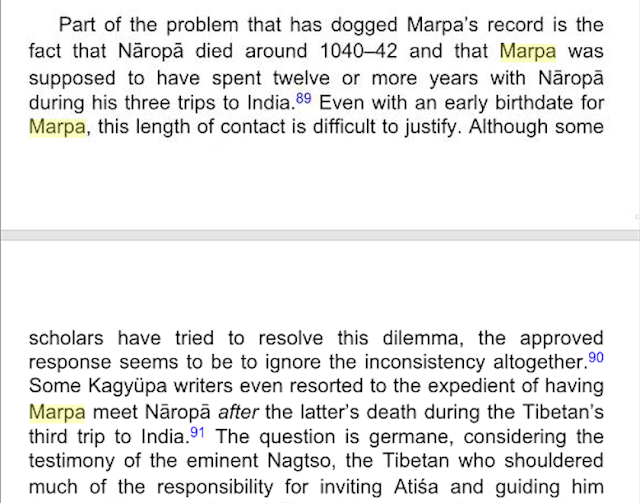 Ashoka's successors....."Buddhism suffered a temporary eclipse during the reign of Ashoka's successors Jalauka and Damodara. Kalhana, a Hindu historian, asserted that large number of Buddhist scholars were vanquished in debates with Jalauka's guru Avadhuta, and hence traditional observances were slowly revived. Later, however, Ashoka's successor Jalauka created a big vihara, the Krityashramavihara, in the vicinity of Varahamula (Baramulla), which was still existing as late as the 11th century..... The history of Kashmir after Damodara is not certain until the time of the Kushanas......A....Kitsahom / Keechashrama / Krityashrama / Kichashrama - Dutt (1993:278, 291)......[The Krityashrama] site has been identified with the place known as Kitsahom which is situated five miles below Baramulla district of Kashmir.....General location of the Krityashrama monastery.... Lat 34.18745 Long 74.26238......".....http://monastic-asia.wikidot.com/krityashrama 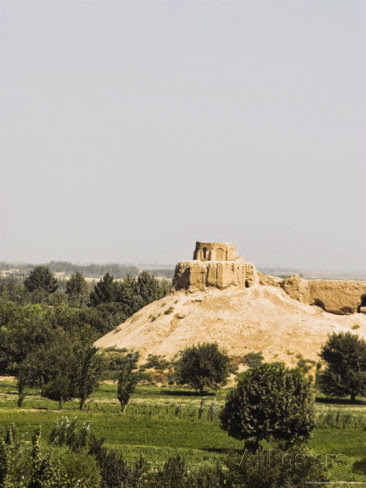 Nava Vihāra, Naw Bahār, or नवविहार (Sanskrit, meaning "New Monastery", (Persian: نوبهار‎ New Spring) was two Buddhist monasteries close to the ancient city of Balkh.....Balkh was the home of the Naw Bahār, a famed Buddhist temple and monastery. By the tenth century, Balkh had become a critical centre of Islamic learning.....Naw Bahār,......a pre-Islamic sacred site and monastery at Balk̲h̲ in what is now northern Afg̲h̲ānistān, destroyed by the Arab invaders.....The Islamic conquest of Afghanistan (642–870) began in the middle of the 7th century after the Islamic conquest of Persia was completed.....by 667, the Afghan area was under invasion by the Arabs but in 683 Kabul revolted and completely routed the invading army.......It was not until 870 that Kabul and the Afghan area was brought under control by the Saffarids.......

Nalanda (Sanskrit: नालंदा Nālandā) was an acclaimed Mahāvihāra, a large Buddhist monastery in ancient Magadha (modern-day Bihar), India. The site is located about 95 kilometres southeast of Patna, and was a religious centre of learning from the fifth century CE to c. 1197 AD......Historians often characterize Nalanda as a university.........At its peak, the school attracted scholars and students from as far away as Tibet, China, Korea, and Central Asia.....It was ransacked and destroyed by an army of the Muslim Mamluk Dynasty under Bakhtiyar Khilji in c. 1197 AD.