Marici .... Goddess of the Sun....."The origins of Marici are obscure; however, she appears to be an amalgamation of Indic, Iranian and non-Indo-Iranian antecedents spanning 1500 years."...Hall, David Avalon (1990). Marishiten: Buddhism and the warrior Goddess, Ph.D. dissertation, (Ann Arbor: University 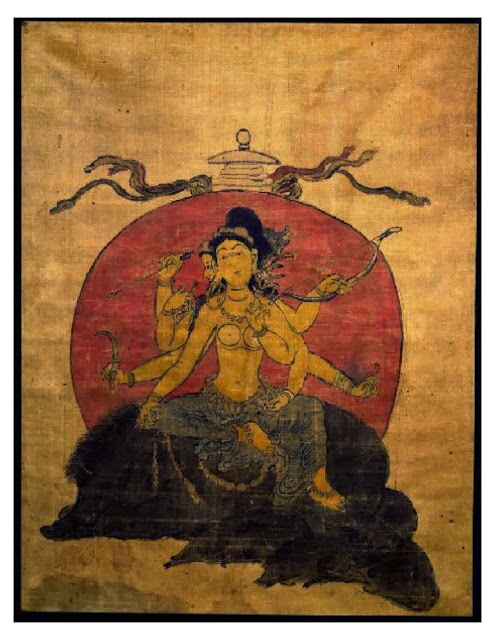 Marichi Painting by the 10th Karmapa, Choying Dorje....Toward the end of 1673, at Nagdrak Monastery, the Tenth Karma produced one of his last works of art, a white-sandalwood statue of Mārīcī riding a pig, for his wife, Norbu Zangpo's mother. Around 1674, he fell ill at Drak and passed away."....http://www.treasuryoflives.org

Marici.......Yidam - Goddess of the Sun......Marici (pron. Marichi) is a red-coloured female yidam associated with the sun and with dawn; her name in Tibetan is Öser Chenma, i.e. Goddess of Great Light. Her mantra is traditionally used as protection by travelers. Marici has an orange-coloured body (the colour of the sun at dawn), and three faces, eight arms and two legs. Of the three faces, the first (central) is orange and smiling, her right face is red, and her left is the face of a white boar: each has three eyes. Her first right hand holds a vajra at the heart in the mudra of teaching, the second holds a vajra axe, the third holds an arrow with the tip pointing downwards, and the fourth, in the mudra of generosity, holds a (sewing) needle. Her first left hand, in the mudra of teaching, holds the stem of a plant whose crown is at the level of her left ear (next to the boar's face). Her second left hand holds a bow, the third holds a thread, and the fourth holds a noose ending in a loop and hook. Marici's right leg is extended in the manner of Tara, while the left is tucked in. She is dressed in the royal robes of a bodhisattva: five-pointed crown surmounting each face, jewels, silks and so forth. Marici rides a throne/chariot drawn along by seven white boars.".....Women Active in Buddhism (WAIB)

"Marici is a Sanskrit name for girls meaning Ray of Light."

"In Mahayana and Vajrayana Buddhism, Marici is a deva or bodhisattva associated with light and the sun. She is known as Molizhitian (摩利支天) or Molizhitian Pusa (摩利支天菩萨) in China and Marishi-ten (摩利支天?) in Japan and in Tibetan as 'Odzer Canma, "Woman Endowed with Rays of Light" (Wylie: 'od zer can ma). She is one of the Twenty (or Twenty Four) Celestials (二十/二十四诸天).

In Taoism, Marici is known under the epithet of the Dipper Mother (Chinese: 斗母元君; pinyin: Dǒumǔ Yuánjūn), a name also used by Buddhists.

"Marici is usually depicted in one of the following ways:
As a beautiful woman on an open lotus, the lotus itself sometimes perched on the back of seven sows.
As a ferocious wrathful deity perched on the back of a boar.
Riding a fiery chariot pulled by seven savage boars or sows.
As a multi-armed woman with a different weapon in each hand standing or sitting on the back of a boar.
She has been depicted with one, three, five or six faces and two, six, eight, ten or twelve arms; three eyes; in her many-faced manifestations one of her faces is that of a sow.


"Marici in China is worshiped as both a Buddhist and Taoist deity. She is highly revered in Esoteric Buddhism. Most often, she is depicted with three eyes in each of her four faces; with four arms on each side of her body. Two of her hands are held together, and the other six hold a sun, moon, bell, golden seal, bow, and halberd. She is either standing/sitting on top of a lotus or pig, or on a Lotus on top of seven pigs. She is celebrated on the 9th day of the 9th lunar month.".....Due to similar iconography, she is often confused with the Bodhisattva Cundī. Among Chinese Buddhists, she is worshiped as the goddess of light and as the guardian of all nations, whom she protects from the fury of war."....Keith Stevens (1997). Chinese Gods: The Unseen World of Spirits and Demons.

"In Taoism, Dou Mu remains a popular deity and is often referred to as Queen of Heaven (Chinese: 天后; pinyin: Tiān Hòu) and is widely worshiped as the Goddess of Beidou (the Chinese equivalent of Ursa Major except that it also includes 2 "attendant" stars). She is also revered as the mother of the Nine Emperor Gods who are represented by the nine stars in the Beidou constellation."....Keith Stevens (1997). Chinese Gods: The Unseen World of Spirits and Demons. 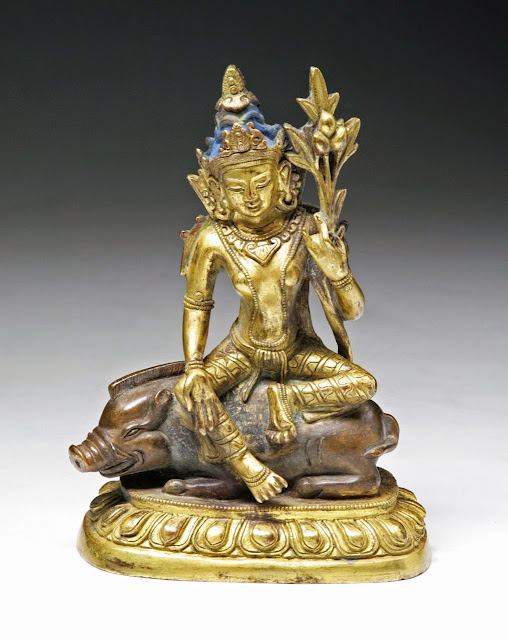 "A Chinese Antique Gilt Bronze Marici: extremely unusual and detailed gilt bronze Marici, wearing an ornate crown while perched on the back of a boar, her right hand rests on her right knee in mudra and left hand holding a lotus branch, of early Qing Dynasty".....http://www.eleganceauction.com

"Japan.......An important deity in the Shingon and Tendai schools, Marici was adopted by the Bujin or Samurai in the 8th century CE as a protector and patron.......While devotions to Marici predate Zen, they appear to be geared towards a similar meditative mode in order to enable the warrior to achieve a more heightened spiritual level. He lost interest in the issues of victory or defeat (or life and death), thus transcending to level where he became so empowered that he was freed from his own grasp on mortality. The end result was that he became a better warrior.......The worship of Marici was to provide a way to achieve selflessness and compassion through Buddhist training by incorporating a passion for the mastery of the self.......Samurai would invoke Marici at sunrise to achieve victory.... Since Marici means "light" or mirage, she was invoked to escape the notice of one's enemies......She was also later worshipped in the Edo period as a goddess of wealth and prosperity by the merchant class, alongside Daikoku-ten (大黒天) and Benzaiten (弁財天) as part of a trio of "three deities" (santen 三天)."....

"Marici (or Marishi-ten in Japan) is a solar deity of light and the heavens and a tutelary deity of the warrior class who is revered in many schools of Buddhism. Her origins are obscure, but she believed to be an amalgamation of Hindu, Iranian, and Non-Aryan antecedents dating back 1500 years. Marici is depicted as either a goddess on a lotus, a multi-armed goddess with many weapons on the back of a boar (similar to Durga), a deity riding a fiery chariot of savage boars, or a ferocious demon on the back of a boar.....Marishiten in Japan is also believed to be a non-standard member of the Seven Lucky Gods who is largely supplanted by Benzaiten. She is also believed to the consort of Dainichi Nyorai and is the harbinger of Dainichi, associated with the blinding rays and fire of the rising sun, and thus with the power of mirage and invisibility. She is also a part of a group of three deities called the Santen, alongside Benzaiten and Daikokuten. "...... 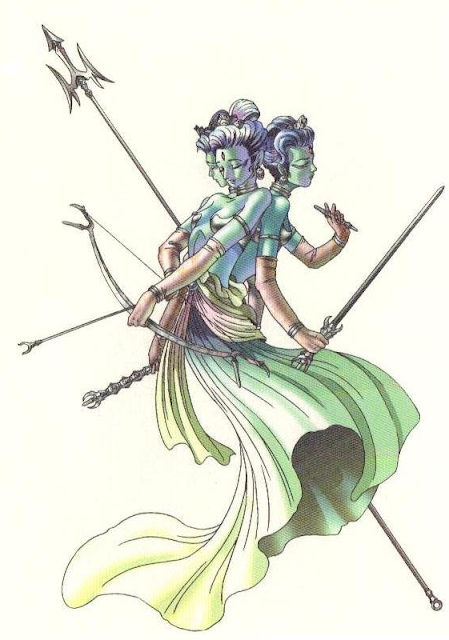 Tibet....Oser Chenma is a yidam (personal deity), the physical symbol of the influence of the gods. The chariot pulled by pigs that she rides, and the tree that she holds were once the home of a demon she vanquished. .... 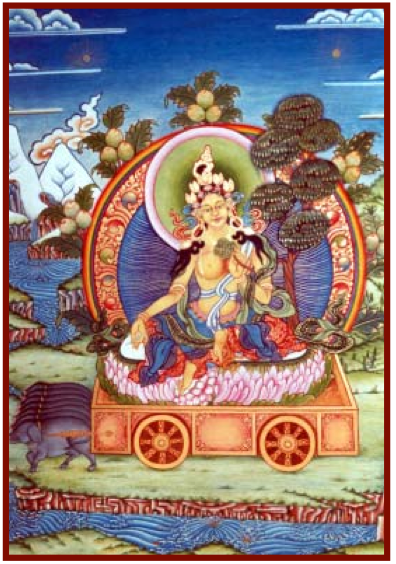 "As a Yaksha General.......Marici has also sometimes included as one of the Twelve Heavenly Generals associated with Bhaiṣajyaguru, the Buddha of Medicine......Images of her are common in India, but there are few examples in China and Japan......".....

"Brahmā, the first-born living being, went along with Marīci and other sages to the place of Kardama’s hermitage, which was surrounded by the River Sarasvatī......marīci—the great sage Marīci; ....After 4,300,000,000 solar years, when Brahmā awoke to create again by the will of the Lord, all the ṛṣis like Marīci, Aṅgirā, Atri and so on were created from the transcendental body of the Lord..."....http://prabhupadabooks.com 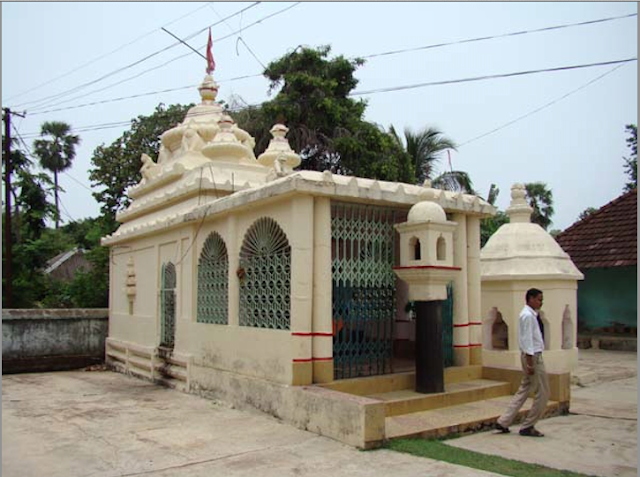 "Marichi Temple (Oriya: ମାରିଚୀ ମନ୍ଦିର) is a Hindu and Buddhist temple located in Ajodhya, Baleswar, Odisha, India.The temple is a newly built pidha vimana like other temples of Odisha. The temple houses many Tantra-, Jainism- and Buddhism-related images dating back to the late 11th century. It is thought that during Somavamsi Keshari rule the deities were built. There are many old icons like four-handed Varahi, Buddha in bhumisparsa mudra, Jain tirthankara, Avalokitesvara......The central icon in is worshiped as Durga and closely seeing the image is a Mahayana goddess Marichi. The Marichi image is flanked by two goddesses. The Garbhagriha houses three icons of late 11th century. Durga Puja is a famous festival in this temple.".....

"Marichi, Kalpoktam (Tibetan: o zer chen ma, English: the One Having Light Rays), Goddess of the Dawn.......Peaceful in appearance, yellow in colour, with three faces and eight hands. Seated atop a large mother sow, the left leg extended rests on the back of several sleeping piglets. The red orb of the morning sun encircles behind crowned with the upper spire of a stupa.
"She who holds the night, and by merely remembering quickly protects from all fears and bestows the stainless great bliss. To the goddess Marichi I bow." (Sakya liturgical verse).
http://www.himalayanart.org/image.cfm/90016.html

"The Haoren Monastery has a Kurukulla Mother Love and Harmony Shrine and a Yellow Jambala Great Wealth Shrine. On the wall behind the Deities there are smaller statues where one’s name can be permanently placed for a lifetime of blessings to enrich one’s future. One can make offerings for one’s business, home, family and friends to Kurukulla Mother and or to the Great Wealthy Yellow Jambala......in the Vajra Shrine we pay homage to Vajra Kalachakra and Marici Bodhisattva. On the wall in the background there are many light offerings. When one gives a light offering we believe one is also given protection by these Deities."......Lotus Light Monastery....Richmond, B.C, Canada