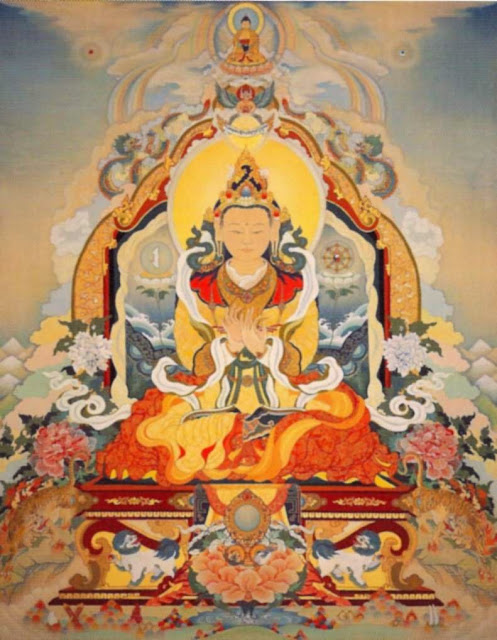 "The Primordial Rigden, the richly-clothed royal image on our main Shambhala shrine".......http://calendar.shambhala-europe.org/images/Thangkas/Rigden.jpg

Imperial (adj.) ...... "having a commanding quality," from Old French imperial (12c.), from Latin imperialis "of the empire or emperor," from imperium. Meaning "pertaining to an empire"

"The Kalachakra tantra puts the life of Shakyamuni Buddha in the 9th. Century BC, instead of the more commonly accepted 6th. Century BC."............http://kalachakranet.org/kalachakra_tantra_history.html 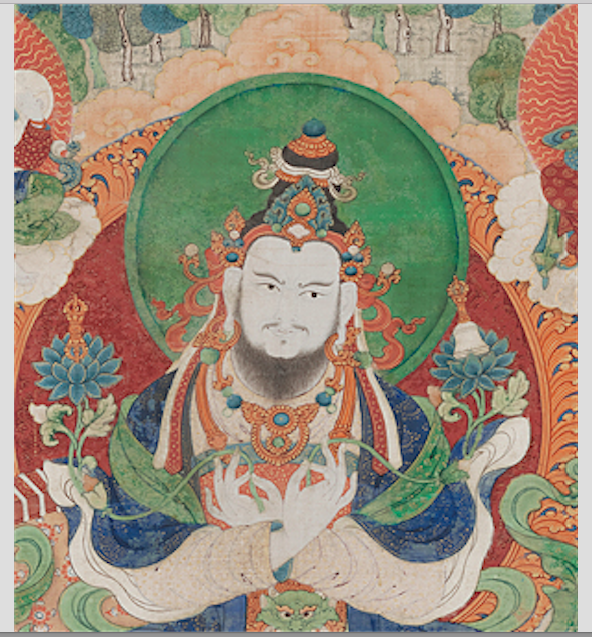 "The Twenty-Five Kalki (Tib. Rigden).....The most recent 25 of the 32 Kings of Shambhala are known as Kalki kings (Tib. Rigden, wylie: rigs ldan). Kalki means "Holder of the Castes."

"Raja (/ˈrɑːdʒə/; also spelled rajah, from Sanskrit राजा rājā-) is a term for a monarch or princely rulers. Rana is practically equivalent, and the female form rani (sometimes spelled ranee) applies equally to the wife of a raja or rana......The title has a long history in the Indian subcontinent and South East Asia, being attested from the Rigveda, where a rājan- is a ruler, see for example the dāśarājñá, the "battle of ten kings"......Sanskrit rājan- is cognate to Latin rēx (genitive rēgis), Gaulish rīx, Gaelic rí (genitive ríg), etc., originally denoting heads of petty kingdoms and city states. It is believed to be ultimately derived from a PIE *h3rēǵs, a vrddhi formation to the root *h3reǵ- "to straighten, to order, to rule". The Sanskrit n-stem is secondary in the male title, apparently adapted from the female counterpart rājñī which also has an -n- suffix in related languages, compare Old Irish rígain and Latin regina. Cognates of the word Raja in other Indo-European languages include English reign and German reich. Rather common variants in Rajasthani, Marathi and Hindi, used for the same royal rank in parts of India include Rana, Rao, Raol, Rawal and Rawat....Protection of his subjects was seen as the first and foremost duty of the king. "

"Noedup Rongae & the Shambhala Lineage thangka.....The Primordial Rigden is the central figure here as well, together with his queen Lhamo Natsok Yum. But this painting is in the form of a lineage tree, and in the central part of the tree, around these two main figures, sit the Dharmarajas and Rigdens of Shambhala. It’s populous in the tree, with more than 70 mystic rulers sitting together, radiating......Noedup Rongae went to H.E. Namkha Drimed’s place in Orissa for the New Year’s celebrations a few years back to work all this out with the Sakyong. There were a lot of decisions to be made....Basically, who would be included, and where they would be placed. Some things were clearly specified, but there were also open elements. The painting follows a description in the Primordial Rigden Ngondro, and that text, for example, mentions “lineage gurus of India and Tibet...The iconography of the Dharmarajas and Rigdens also presented challenges. Noedup searched for a long time — years, in fact — to find suitable descriptions "...with Acharya David Schneider ....http://shambhalatimes.org/2012/07/11/shambhala-lineage-thangka-update/

"The Sakyong Foundation, with the support of the Shambhala community, successfully raised the funds for the Shambhala Lineage Thangka commissioned by Sakyong Mipham in July 2008. This seven by ten foot sacred painting is the work of master thangka artist Noedup Rongae and his team at the Shambhala Art School in Northern India......The Shambhala lineage draws on the wisdom of the Kagyu and Nyingma schools of Tibetan Buddhism as inherited by Chögyam Trungpa, founder of Shambhala, and Sakyong Mipham, his son and spiritual heir."...http://www.sakyongfoundation.org/rigden-lineage-thangka/ 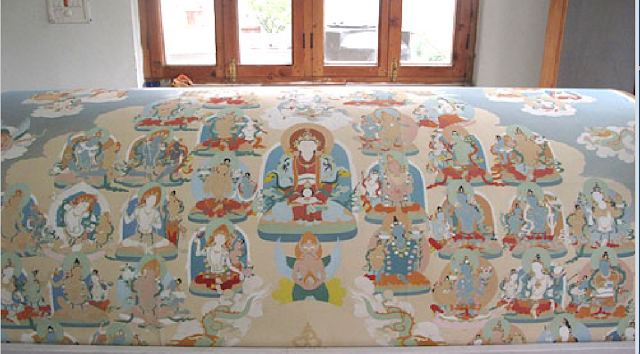 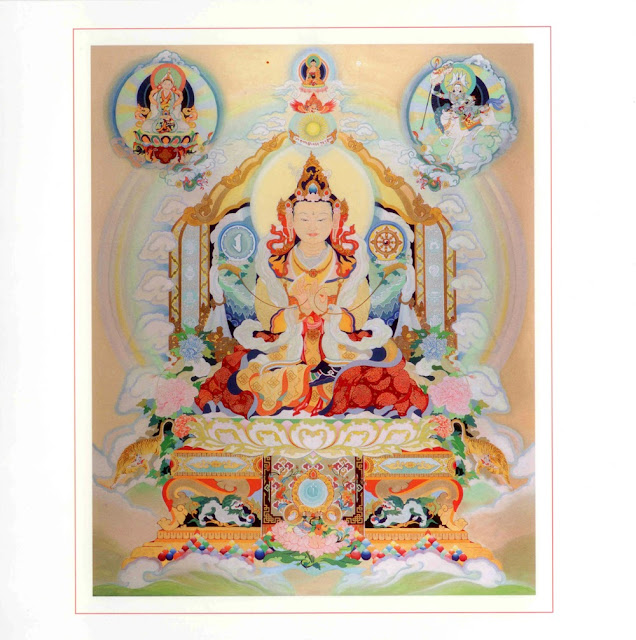 "THE PRIMORDIAL RIGDEN .....with The Dharmaraja Dorje Dradul & Shiwa Okar
In the beginning of 2010, at His Majesty The Sakyong Jamgon Mipham Rinpoche’s request, the Artist (Cynthia Moku) began preliminary drawings for a second Primordial Rigden thangka painting....Along with Shakyamuni Buddha at the top center of the composition..... three primary figures in this thangka. They are; the Primordial Rigden centered, the Vidyadhara Chögyam Trungpa Rinpoche as The Dharmaraja Dorje Dradul above in the sky to the Rigden’s right, and Shiwa Okar, Peaceful White Light, above in the sky to the Rigden’s left. Thus, these three figures embodying the Primordial Rigden uncomponded wisdom & compassion, the Dorje Dradul indestructible wisdom teacher and Shiwa Okar principle yidam.....The thangka depicts the Primordial Rigden in a brilliant white and golden embodiment, seated on a white lotus resting on a gold and crystal throne surrounded by the Four Dignities. Appearing beneath spheres of light encircling the Dorje Dradul and Shiwa Okar, two Dragons move through the clouds towards the Primordial Rigden. The powerful Garuda spreads wings out wide, above a fully shining Great Eastern Sun and a banner proclaiming “Profound, Brilliant, Just, Powerful and All-Victorious”, while Tigers and Lions flank the throne of the Primordial Rigden."....http://shambhalamountainstore.com/primordial-rigden-8x8-485/

"Chögyam Trungpa..... “Shambhala: the Sacred Path of the Warrior ” which tells of a pre Buddhist Tibetan religion of the Shambhala Warriers......“The imperial rulers of Shambhala, who are called the Rigden Kings, are inhabitants of the cosmic mirror. They are referred to as ultimate drala. When you contact the wisdom of the cosmic mirror, you are meeting the ultimate dralas, the Rigden kings of Shambhala. Their vast vision lies behind all the activities of mankind, in the open, unconditioned space of mind itself. In that way, they watch over and protect human affairs, so to speak. This is quite different from the notion that the Rigdens are living on some celestial plane, from which they look down at the earth.” 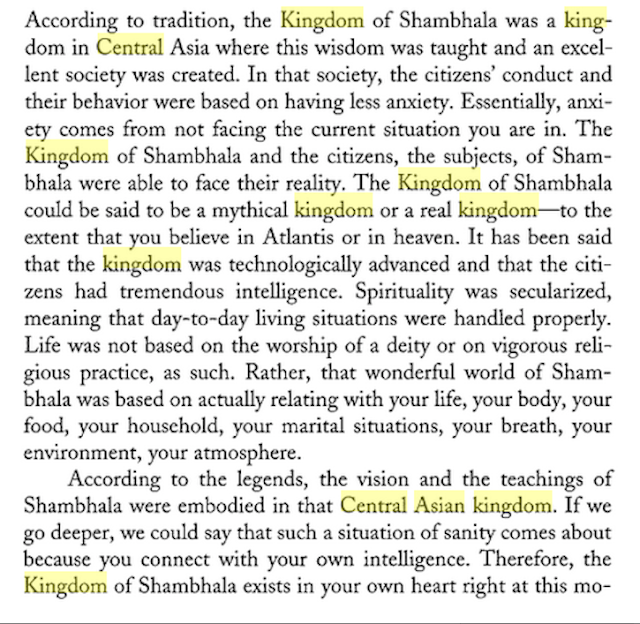 Cynthia Moku is an accomplished artist in Japanese brushwork and Buddhist Scroll painting. A student of Kyabje Kalu Rinpoche, she continues her meditation training with Sakyong Mipham Rinpoche. Cynthia is the founder of Naropa University’s Visual Art Degree Program.....http://cynthiamoku.com/introduction/

"Rigden Gallery.......Seeking Shambhala: The Mythical Kings of Shambhala.....In 1906, the Boston Museum of Fine Arts acquired a set of 17th-century Tibetan paintings depicting the mythical Shambhala kings. The exhibition featured newly-conserved thangka paintings of the Rigden (or Kalki) Kings of Shambhala. The Museum has generously agreed to let Shambhala display these important thangkas online, and we are delighted to present them here........Deep within central Asia – according to ancient Tibetan Buddhist texts – hidden by mist and a ring of snow-covered peaks lies a fabulous kingdom called Shambhala. It’s a mystical, visionary place ruled by a lineage of thirty-two kings. Their charge: to uphold the Kalachakra Tantra, a sacred teaching passed from the Buddha to Shambhala’s first king.....http://shambhalanews.com/rigden-gallery-opening-page/ 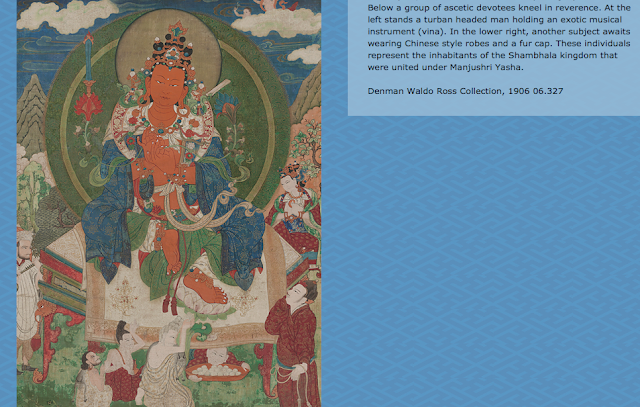 Manjushri Yashas first Kalki King of Shambhala and the VAJRA CASTE...."The purpose of the Vajra Caste was not force everyone to convert to Buddhism but for people to re-discover the purity of their own traditions.."...https://collab.itc.virginia.edu/access/content/group/9f340e95-f808-4bc0-80bc-b23bcadd072e/copyrighted%20pdfs%20of%20texts/newmanbriefhistorykalachakra.pdf