"Tajik is occasionally written as Tadzhik or Tadjik, a transcription of the Russian spelling." 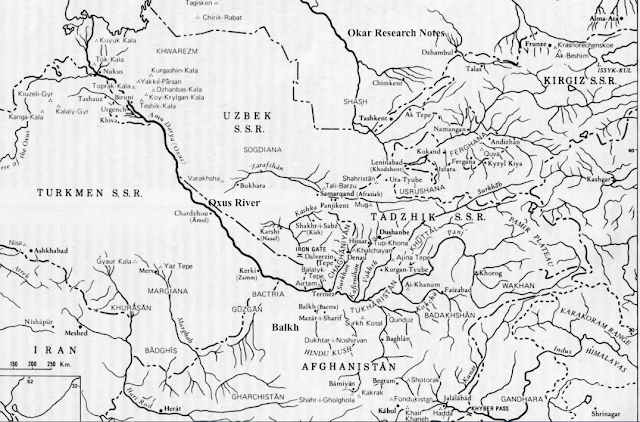 "Tajik, also spelled Tadzhik, sometimes called (before the 20th century) Sart, the original Persian-speaking population of Afghanistan and Turkistan. The Tajiks constitute almost four-fifths of the population of Tajikistan. In the early 21st century there were more than 5,200,000 Tajiks in Tajikistan and more than 1,000,000 in Uzbekistan. There were about 5,000,000 in Afghanistan, where they constituted about one-fifth of the population. Another 40,000 lived in the Uygur Autonomous Region of Xinjiang in China......The name Tajik refers to the traditionally sedentary people who speak a form of Persian called Tajik in Tajikistan and Uzbekistan and who speak the modern Persian language in Afghanistan."

"The Tajiks were the heirs and transmitters of the Central Asian sedentary culture that diffused in prehistoric times from the Iranian plateau into an area extending roughly from the Caspian Sea to the borders of China. They built villages of flat-roofed mud or stone houses and cultivated irrigated fields of wheat, barley, and millet. Their gardens were famous for melons and a variety of fruits. Their crafts were highly developed, and their towns along the caravan routes linking Persia, China, and India were centres of trade. Turks subsequently migrated westward into the area inhabited by the Tajiks. The latter became Turkicized in their culture, though many retained their Iranian language......http://www.britannica.com/EBchecked/topic/581024/Tajik

"Mount Garmo (Tajik: Қуллаи Гармо, Qullai Garmo, Russian: пик Гармо, pik Garmo) is a mountain of the Pamirs in Tajikistan, Central Asia, with a height reported to be between 6,595 metres and 6,602 metres....Formerly in the Soviet Union, Garmo forms part of the Akademiya Nauk Range....A Russian expedition to the region in 1928 made the first ascent of Lenin Peak and also measured the height of what is now officially called Ismoil Somoni Peak, which may have been mistakenly identified with Garmo although it lies some sixteen kilometres to the north of the present Garmo."

"The Beyul realm of Tagzig Olmo Lung Ring is fabled to be located to the west of Mount Kailash and shaped like an eight-petaled lotus and divided into four regions: inner, middle, outer and boundary area. The sky of this realm is likened to an eight-spoked wheel (refer Dharmachakra) and the land itself is fragrant and coloured by beautiful flora and landscaping, chorten and snow-capped mountains.......Central to Tagzig Olmo Lung Ring is Yungdrung Gutsek, a pyramidal-shaped mountain serving as axis mundi with nine Yungdrungs....(sauwastika) ascending like a staircase evocative of the Nine Ways (or stages) of Bon. The four faces of the pyramidal mountain, face the four cardinal directions. At the corner-joints of Yungdrung Gutsek (cross-quarter directions) four rivers flow from simulacra of archetypal thoughtforms:
from the simulacrum of a snowlion the river Narazara flows from the East;
from the simulacrum of a horse the river Pakshi flows from the North;
from the simulacrum of a peacock the river Gyim Shang flows from the West; and
from the simulacrum of an elephant the river Sindhu flows from the South.
...Geshe Nyima Dakpa Rinpoche (2006). Opening the Door to Bon. Snow Lion Publications. 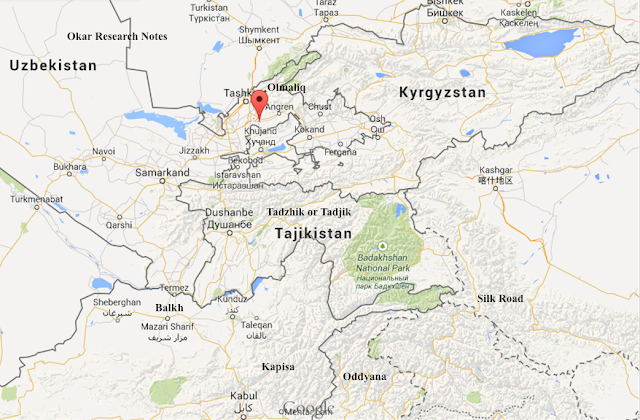 "Tajik (Persian: تاجيك‎, also Romanized as Tājīk) is a village in Jeyransu Rural District, in the Central District of Maneh and Samalqan County, North Khorasan Province, Iran....Khorasan (Persian: استان خراسان‎ ).... (also transcribed as Khurasan and Khorassan, also called Traxiane during Hellenistic and Parthian times) was a province in north eastern Iran, but historically referred to a much larger area east and north-east of the Persian Empire. The name Khorasan is Persian and means "where the sun arrives from." The name was given to the eastern province of Persia during the Sassanid Empire."...The older Persian province of Khorasan included parts which are today in Iran, Afghanistan, Tajikistan, Turkmenistan and Uzbekistan. Some of the main historical cities of Persia are located in the older Khorasan: Nishapur and Tus (now in Iran), Merv and Sanjan (now in Turkmenistan), Samarkand and Bukhara (both now in Uzbekistan), Herat and Balkh (now in Afghanistan), Khujand and Panjakent (now in Tajikistan). In its long history, Khorasan knew many conquerors and empires: Greeks, Mauryans, Arabs, Seljuk Turks, Safavids, Baloch, Pashtuns and others."

"The influence of the Buddhist art of Fondukistan, dated to the seventh and eighth centuries, is reflected in the contemporaneous art of northern Toḵārestān, exemplified by the murals and clay sculpture from the Buddhist monastery at Adzhina tepe, near Kurgan Tyube, in southern Tajikistan. The colossal image of a recumbent Buddha (originally 12 m) from this site, recalls the gigantic Buddha image of Bāmīān, noted by the Chinese pilgrim Hsüan tsang in the seventh century, and other large Buddha images uncovered in western Turkestan (from Krasnaya rechka near Frunze, Kuva in Ferghana [Farḡāna], and Marv).."....http://www.iranicaonline.org/articles/art-in-iran-vi-pre-islamic-eastern-iran-and-central-asia 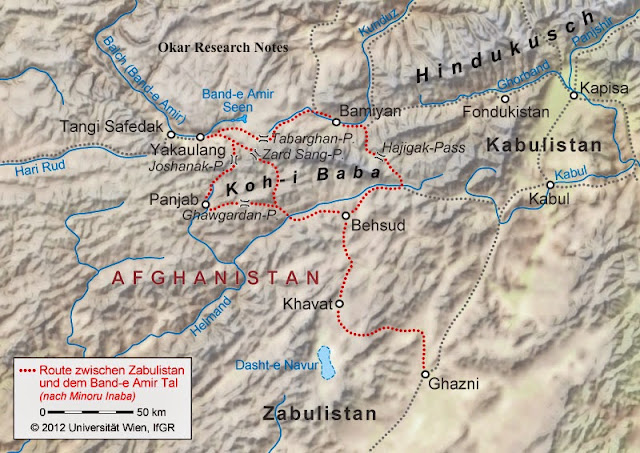 The road from Ghazni to the valley of Band-e Amir and Yakaulang. (© Minoru Inaba).....http://pro.geo.univie.ac.at/projects/khm/showcases/showcase12?language=en

"FONDOQESTĀN......(FONDUKISTAN), early medieval settlement and Buddhist monastery in Afghanistan, in the province of Parvān (Parwan). The site is usually dated to the 7th century CE on the evidence of artistic style and numismatic finds, the oldest of which is from 689 C.E. However, the shape and the decorations of the stupa suggest that the complex can be even earlier. The site is situated in the Ḡūrband valley, five kilometers south of Sīāhgerd and 117 kilometers north-east of Kabul, at 34° 58′ N 68° 53′ E. It was named after a village located nearby....Unfortunately, no detailed description or documentation of the site has ever been published. The most important data about the installations is still unavailable; even the exact size of the structures is not known.".....http://www.iranicaonline.org/articles/fondoqestan- 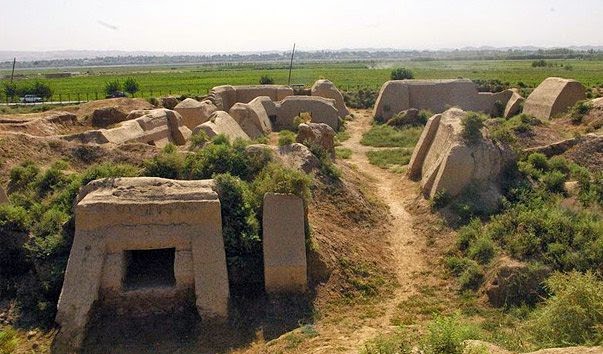 "Adzhina Tepe - a hill located 12 km from the Tajik city of Kurgan-Tube.... the Buddhist sites further east at Adzhina Tepe near Kurgan-Tyube, at Kuva in Farghana and at Ak-Beshim near Frunze...Splendid Buddhist remains of the 7th-8th century A.D. have been dug up since 1959 in Adzhina-tepe (the "Devil's Mound", 12 km off Kurgan-Tyube) by Litvinskiy....The architecture and decoration of the monastery organically merged local traditions and ancient Tokharistan various Indian elements. International Organization UNESCO awarded Adzhina Tepe nominee status as a UNESCO World Heritage Site." 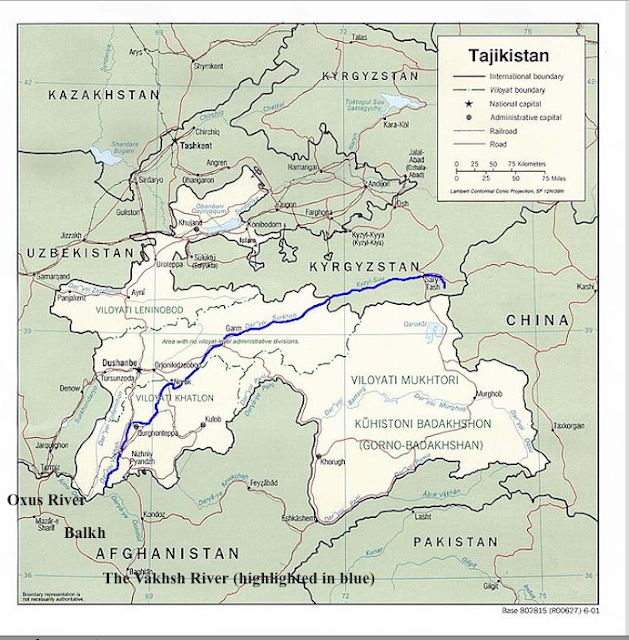 "The Vakhsh River (Tajik: Вахш), also known as the Surkhob (in north-central Tajikistan) and the Kyzyl-Suu (in Kyrgyzstan), is a Central Asian river, and one of the main rivers of the nation of Tajikistan. It is a tributary of the Amu Darya (Oxus) river.....Intensive agriculture in the Vakhsh basin has left the river polluted with fertilizers, pesticides, and salts...Since the waters of the Vakhsh eventually flow into the Aral Sea, pollution in the Vakhsh contributes to eutrophication there....The Vakhsh is fed by the glaciers of the Pamirs, one of the world’s most susceptible regions to climate change. "