"The country of Olmo Lungring where Tonpa Shenrab descended from the celestial spheres and took up incarnation among human beings as an Iranian prince. The mysterious land of Olmo Lungring (`ol-mo lung-rings) or Olmoling (`ol-mo`i gling) is said to be part of a larger geographical region to the northwest of Tibet called Tazig (stag-gzig, var. rtag-gzigs), which scholars identify with Iran or, more properly, Central Asia where in ancient times Iranian languages such as Avestan and later Sogdian were spoken. According to the “gZer-mig” the traditional etymology of the name Olmo Lungring is as follows: “`ol” means “unborn”, “mo” “undermined”, “lung” “the prophetic words of Shenrab”, and “rings” “everlasting compassion”. According to the “gZi-brjid”, Olmo Lungring was also known as Shambhala in Sanskrit and it continues to be known by this name among Tibetan Buddhists even today. Moreover, it is said that in ancient times it encompassed fully one-third of the known world a statement which could apply to the historical Persian empire."..... OLMO LUNG-RING: THE IMPERISHABLE SACRED LAND.....by Vajranatha......http://www.surajamrita.com/bon/Shambala.html

"The Sogdian language was an Eastern Iranian language spoken in the Central Asian region of Sogdiana, located in modern-day Uzbekistan and Tajikistan (capital: Samarkand; other chief cities: Panjakent, Fergana, Khujand and Bukhara). Sogdian is one of the most important Middle Iranian languages, along with Bactrian, Khotanese Saka, Middle Persian and Parthian. It possesses a large literary corpus. The language is usually assigned to a Northeastern group of the Iranian languages, although this is an areal rather than genetic group. No direct evidence of an earlier version of the language ("Old Sogdian") has been found, although mention of the area in the Old Persian inscriptions means that a separate and recognisable Sogdiana existed at least since the Achaemenid era (559-323 BC)......Like Khotanese, Sogdian possesses a more conservative grammar and morphology than Middle Persian. The modern Eastern Iranian language Yaghnobi is the descendant of a dialect of Sogdian spoken around the 8th century in Ustrashana, a region to the south of Sogdiana." 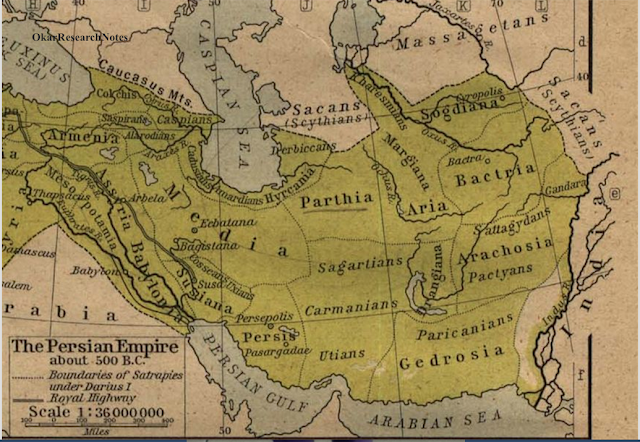 "The economic and political importance of Sogdian guaranteed its survival in the first few centuries after the Islamic conquest of Sogdiana in the early eighth century AD. A dialect of Sogdian spoken around the 8th century in Ustrashana (capital: Bunjikat, near present-day Istaravshan, Tajikistan), a region to the south of Sogdiana, developed into Yaghnobi language and has survived into the 21st century. It is spoken by the Yaghnobi people."

"The Yaghnobi, who have inhabited the high mountain valley of Yaghnob in west-central Tajikistan for centuries, have been identified as descendants of the ancient Sogdians. The kingdom of Sogdiana existed from before the sixth century BC until the Arab conquests of the eighth century AD..... The region to the south of Sogdiana, Ustashana (also called Sorushna) was also populated by Sogdian speaking people (Negmatov, 1999). Its capital, Bunjikat, was near present day Istravshan in northwest Tajikistan (Bosworth, 2005). The dialect of Sogdian spoken in Ustrashana in the eighth century has been identified through lexical and phonological similarities as the language from which modern Yaghnobi has descended.....https://yaghnobi.wordpress.com/2007/10/15/history-of-the-yaghnobi-people/#more-106

"After the Sogdians were defeated by Arab invaders at the battle of Mount Mugh in 722 AD, many of them fled Arab domination to live in the high mountain valleys (Whitfeld, 2005). According to Belyakov (2003) the village of Pskon in the Yaghnob valley became a de facto capital for the Sogdian refugees. It appears that the Sogdian refugees remained fairly isolated from outside authority and influence, although significant numbers were subject to forced conversion to Islam. Eventually all of the Yaghnobi adopted Islam, but they also retained Zoroastrian beliefs which continue to be a part of their religious practice (Gunya, 2002)....During 1970 and 1971 the Soviet authorities forcibly deported the entire population of the Yaghnob valley to the cotton plantations in the area of Zafarbod."........https://yaghnobi.wordpress.com/2007/10/15/history-of-the-yaghnobi-people/#more-106 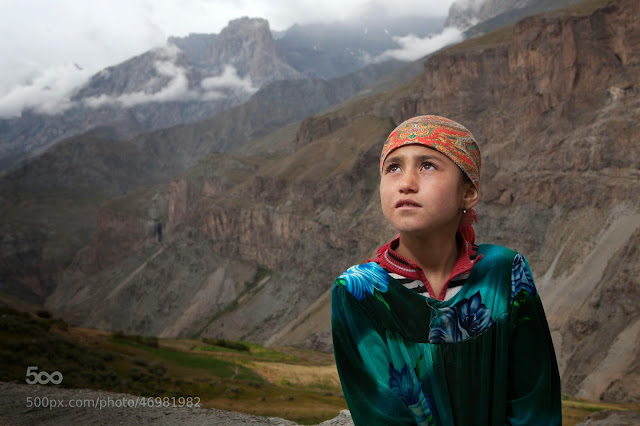 "MUGH, MOUNT (Kuh-e moḡ ‘Magus Mount’), site of the 7th-8th-century refuge of the rulers of Penjikent in Sogdiana, where an important archive of documents written in Sogdian was discovered in 1930s. The castle was built on a mound overlooking the confluence of the Zerafshan (Zarafšān) and the Qom rivers, at a height of 1500 m above the sea level and 150 m above the running waters. Its location is some 120 km east of Samarkand and 60 km east of Penjikent. It consisted of a walled structure rectangular in shape and surrounding a courtyard, and a two-story building upon a platform in its northeastern corner...The famous archives consisting of seventy-four documents in Sogdian, one in Arabic, one Turkish runic script, and several in Chinese are now preserved in the St. Petersburg branch of the Oriental Institute of the Russian academy.".....http://www.iranicaonline.org/articles/mugh-mount 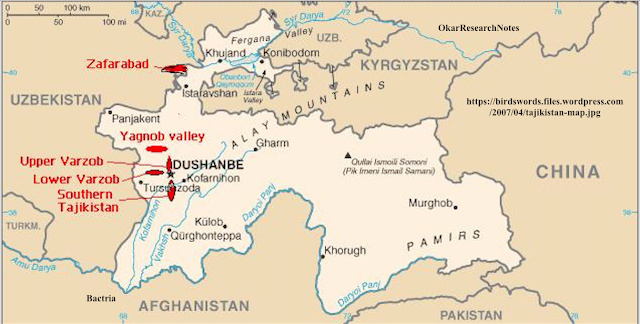 "Some of the Sogdian traders who plied their trade along the Silk Roads between China and Asia Minor and even resided in China, came from the Yagnobi region of Sugd. The Yagnobi Sogdians have special links to Zoroastrianism. They left behind a legacy including Avestan texts written in Yagnobi Sogdian..... Even today, names like Rustam, a legendary Aryan / Iranian name, are common among the Yagnobi. The Yagnobi language spoken today is a dialect of the ancient Sogdian language which died out some time after the 10th century AD. ".....http://www.heritageinstitute.com/zoroastrianism/tajikistan/page2.htm 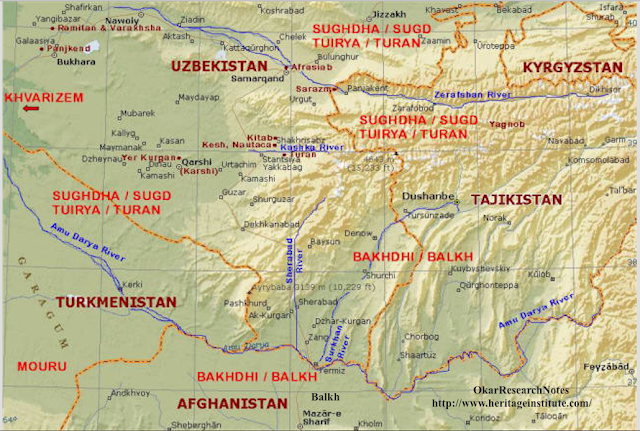 The Sogdian site of Bunjikath near Shakhristan, was the 8th-century capital of the kingdom of Ushrushana.....Bunjikath....(Ancient Penjikent)......Built in the 5th century on the banks of the Zerevshan River, it was abandoned in the 8th. The city was built by the Sogdians and was the capital of Panch and its rulers. Most of the antiquities are now in The Hermitage in St Petersburg......The Principality of Ushrusana (also spelled Usrushana and Osrushana) was a local Iranian dynasty of Sogdian origin, which ruled the Ushrusana region from an unknown date to 892 AD......