"Lal Ded, Lal Didi, or Lalleshwari (1320–1392) was a Kashmiri Saivite mystic, whose mystic poetry (called vatsun or vakhs, i.e. that which flows, or speech, the Aryan name for the Oxus River near Balkh, the original Saraswati) constitute some of the earliest compositions in the Kashmiri language."....http://shayarmarket.blogspot.com/2014/08/lal-ded-shiv-chuy-thali-thali-rozan.html

"Lalleshwari (1320–1392) was a mystic of the Kashmiri Shaivite sect. She was a creator of the mystic poetry called vatsun or Vakhs, literally "speech". Known as Lal Vakhs, her verses are the earliest compositions in the Kashmiri language and are an important part in history of Kashmiri literature. She inspired some of the later Sufis of Kashmir.....She is also known by various other names, including Lal Ded, Lalla, Lal Diddi, Laleshwari, Lalla Yogishwari and Lalishri."....Richard Carnac Temple (1 August 2003). Word of Lalla the Prophetess. Kessinger Publishing. 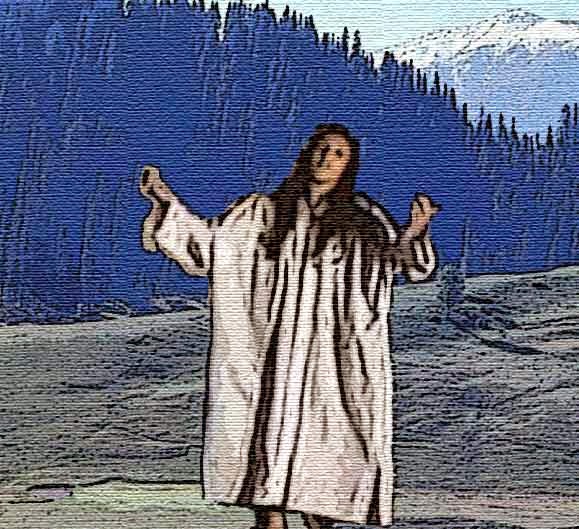 
"The Rishi order of Kashmir is a Sufi tradition associated with religious harmony. Many of the saints held dear by Kashmiris to this day were Sufi Rishis. The original Rishis include Sheikh Noor-ud-din Wali also known as Nund Rishi. The Rishi order has made an important contribution to Kashmiriyat, the ethnic, national, social and cultural consciousness of the Kashmiri people, as well as a distinctive contribution to global Islam. The 17th-century poet Baba Nasib sums up the impact of the Rishi order thus: "The candle of religion is lit by the Rishis, they are the pioneers of the path of belief. The heart-warming quality of humble souls emanates from the inner purity of the hearts of the Rishis. This vale of Kashmir, that you call a paradise, owes a lot of its charm to the traditions set in vogue by the Rishis."….Kashmiris use the Hindu epithets Rishi or Baba to describe these Sufi saints. The Shaivite yogini Lal Ded was a key influence on Nund Rishi, and is said to have suckled him at her breast when he was an infant. Sufi Rishis were certainly aware of yogic practices, as evidenced by the poet Shams Faqir's praise of Lal Ded: "Lalla achieved the fusion of her vital air and ether, and thus realized God." However, the Sufi Rishis made an effort to clearly distance themselves from certain Hindu practices. Some were farmers, and Nund Rishi himself is said to cultivated land in order to demonstrate the spiritual and social importance of manual labour, abhorred by the Brahmins. "

"Lalleshwari was born in Pandrethan (ancient Puranadhisthana) some four and a half miles to the southeast of Srinagar in a Kashmiri Pandit family. She married at age twelve, but her marriage was unhappy and she left home at twenty-four to take sanyas (renunciation) and become a disciple of the Shaivite guru Siddha Srikantha (Sed Bayu). She continued the mystic tradition of Shaivism in Kashmir, which was known as Trika before 1900.....

"Vatsun is derived from Sanskrit ‘Vachan’ meaning word/speech. This is because it has no particular pattern of versification or rhyme scheme. The metres and rhyme schemes of vatsun are varied, but generally each unit is a stanza of three lines followed by a refrain (vooj). Vatsun bears a resemblance to Urdu lyric. Vatsun is also similar to the ghazals of the Middle East and iambic pentameter of the Western world......In poetry it is a popular age-old folk-form dating back to the fourteenth century, when Lal Ded and Hazart Sheikh-ul-Alam (alias Nund Rishi) wrote in Kashmiri language the devotional poetry depicting their mystic experiences, love for God, love for others, and folk dancing."..."Vatsun." Encyclopaedia of Indian literature vol. 5. 1992.

"Lal Ded....b. 1355......Born in modern-day Kashmir, 14th-century Kashmiri saint and mystic poet Lal Ded (Mother Lalla), also known as Lalla or Lalleshwari, was married at the age of 12 into a family that was reported to have regularly mistreated her. After becoming a disciple of Sidh Srikanth, she renounced her material life and marriage to become a devotee of the god Shiva. As a mystic, she wandered naked, reciting her proverbs and quatrain-based poems. Lal Ded often used her poetry as a peaceful means of engagement with both Shaivism and Sufism.....Her poetry has been translated widely, including English translations by Jane Hirshfield in Women in Praise of the Sacred: 43 Centuries of Spiritual Poetry by Women (1994), Coleman Barks in Naked Song: Lalla (1992), and K.C.I.E. Sir George Grierson in Lalla-Vakyani or The Wise Sayings of Lal-Ded, A Mystic Poetess of Ancient Kashmir (1920). ".....http://www.poetryfoundation.org

"I was passionate, filled with longing,
I searched far and wide.
But the day that the Truthful One
found me, I was at home."
Lal Ded, “[I was passionate]” translated by Jane Hirshfield, from Women in Praise of the Sacred (New York: Harper Collins, 1994).

"The leading Kashmiri Sufi figure, Sheikh Noor-ud-din Wali, also known as Nooruddin Rishi or Nunda Rishi, was highly influenced by Lal Ded. One Kashmiri folk story recounts that as a baby, Nunda Rishi refused to be breast-fed by his mother. It was Lal Ded who breast-fed him. Lal Ded and her mystic musings continue to have a deep impact on the psyche of Kashmiri common man, and the 2000 National Seminar on her held at New Delhi led to the release of the book Remembering Lal Ded in Modern Times.....A solo play in English, Hindi and Kashmiri titled 'Lal Ded' (based on her life), has been performed by actress Mita Vashisht all over India since 2004."

"Lalleshuri (Lal Ded) of Kashmir.....Her poetic compositions or VAAKHS as they are popularly called are the extempore outpourings of a highly awakened YOGINI and exhibit high quality poetry with a deep philosophical content..... Lalleshuri communicated her spiritual teachings in the language of the common man using verbal medium only......The VAAKHS of Lalleshuri.... a highly awakened SHAIVITE YOGINI and a religious philosopher. Her sayings about the futility of worldly existence and the escape route through the practice of Yoga have received wide recognition.... Her poetic compositions were instantly committed to public memory and sung as divine songs to make retribution to God for ones sins. A highly awakened soul, a YUGPURSHA and a living incarnation of Lord Shiva, she gave out rare gems of VAAKHS in the common man’s word showing a clear path towards self realization.".....http://www.shehjar.com

"Lalleshuri is a great interpreter of the divine word AUM. She extensively explains the validity of AUM in achieving higher stages in yoga through PRANAYAMA and advancement of self by mastering efficiently the recitation of AUM. She says one who is able to master the recitation of this divine word with the rhythm of his breath without any digression of thought can form an easy bridge between him and the universal consciousness. LALLA says further that she gradually mastered the recitation of AUM in a way that she began feeling a strange sensation and with it her whole ego vanished, and thus detached from the world she was enlightened.".....http://www.shehjar.com

"Lalleshuri has given exhaustive description of KUDALINI SHAKTI and the exercise of KUNDALINI JAGRAN. The KUDALINI SHAKTI is a latent energy in the form of a coiled serpent with its abode in the lower end region of the spinal cord of the human body. On purification and awakening of this energy which is a systematic YOG-KRIYA the divine energy takes an upward course through spinal cord called KUNDALINI JAGRAN performed with the inhalation and exhalation of breath (PRANAYAMA) and gradually with sustained effort the energy reaches the top of the head of the YOGI. On acquisition of this energy the seeker attains the final and most comprehensive truth about the entire universe. This is the highest stage in YOGA and when the seeker reaches this stage all his passions for worldly pleasures retire and he is freed from the cycle of birth and death, a stage of eternal bliss. Lalleshuri calls KUDALINI SHAKTI in the form of a coiled serpent a SHAH-MAR (king serpent) and calls upon the seeker to lift the lid off the container of this energy by the power of exhalation and inhalation of breath and dive deep into the supreme consciousness.".......http://www.shehjar.com

"Mita Vashisht has worked in off-beat cinema as well as in commercial roles. She has worked in theatre and has written scripts as well. Since 2004, she has performed her solo play in English and Hindi, titled, Lal Ded, based on life of medieval Kashmiri mystic Lal Ded, all over India.".... C.S. Lakshmi (1 May 2005). "Songs of a mystic" 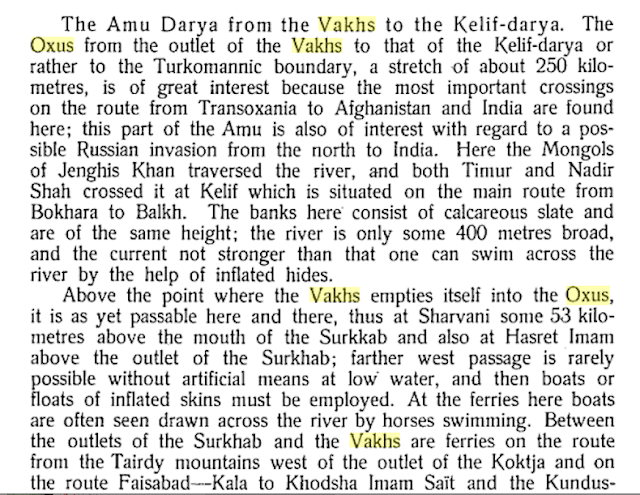 The Emir of Bokhara and His Country: Journeys and Studies in Bokhara... By Ole Olufsen 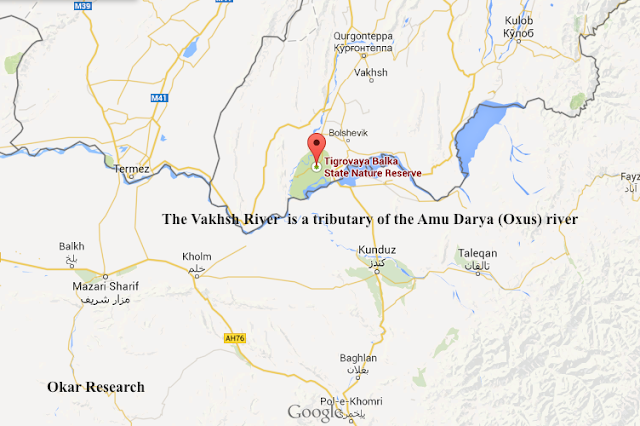 The Vakhsh River (Tajik: Вахш), also known as the Surkhob (in north-central Tajikistan) and the Kyzyl-Suu (in Kyrgyzstan), is a Central Asian river, and one of the main rivers of the nation of Tajikistan. It is a tributary of the Amu Darya river.