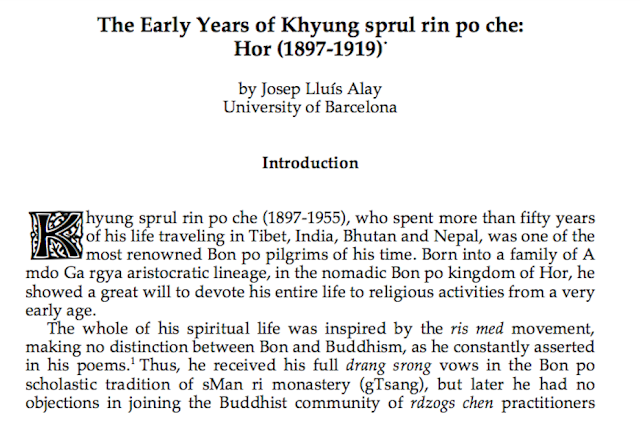 Josep Lluís Alay Rodríguez.....The Early years of Khyung sprul rin po che: Hor (1897-1919), Revue d'Etudes Tibetaines 20, 205-230, 2011....the director of Heritage, Museums and Archives of the City Council . He is also Professor of Contemporary History of Tibet and Mongolia at the Faculty of Geography and History the University of Barcelona ....In 2010 he received a doctorate in Contemporary History from the University of Barcelona with a thesis on the Lama Tibetan Khyung Sprul Rin Po Che : Khyung Sprul Rin Po Che, A beggar Tibetan: his life and travel in Kinnaur and Western Tibet. 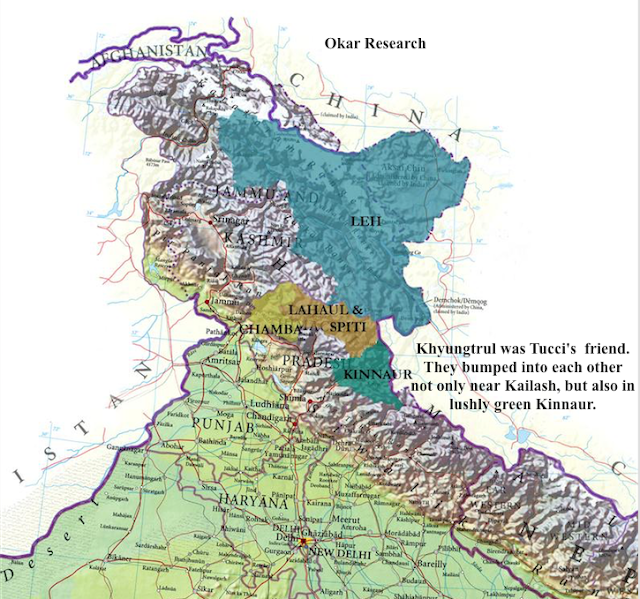 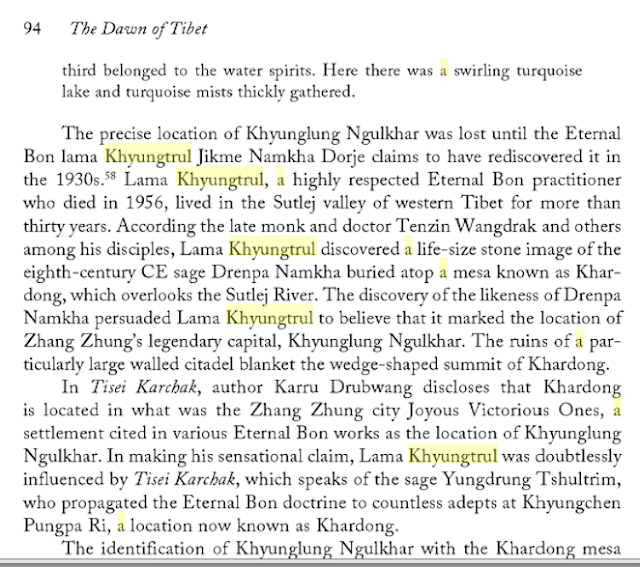 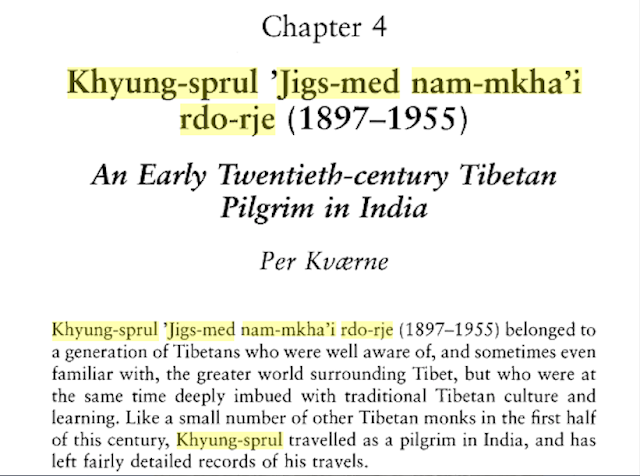 "Fortress Face (Mkhar-gdong) is located in southwestern Tibet, in the upper Sutlej valley. This site was equated with the fabled Horned Eagle Valley Silver Castle (Khyung-lung dngul-mkhar) by the famous Bon lama Khyungtrul Jikme Namkha Dorje (Khyung-sprul ’jigs-med nam-mkha’ rdo-rje), some 70 years ago. Of course, in Tibetan literature, Horned Eagle Valley Silver Castle is recorded as the main capital of the Zhang Zhung kingdom. The highly degraded ruins of Fortress Face cover approximately 20,000 m², making it one of the largest ancient strongholds in Upper Tibet. In addition to the parapet wall that once lined much of the rim of the mesa, the summit is blanketed in piles of rubble and depressions. There are also small standing wall segments on the summit, but not enough remains intact to gauge ground-plans. Nonetheless, from the amount of debris dispersed on the site it would appear that significant structures once stood here......According to three elderly disciples of Khyungtrul Jikme Namkha Dorje I have had the opportunity to interview, this lama pronounced Castle Face the Horned Eagle Valley Silver Castle after discovering what he believed was a statue of the 8th century CE Bon saint Drenpa Namkha (Dran-pa Nam-mkha’) at the site. Bon sources tells us that Drenpa Namkha’s father, Gyungyar Mukö (rGyung-yar mu-Khod), was the king of Zhang Zhung; his capital none other than Horned Eagle Valley Silver Castle....This identification of Fortress Face with horned Eagle Valley Silver Castle, however, escaped Giuseppe Tucci during his 1935 to the region.".....Professor David Germano.....http://www.tibetarchaeology.com/may-2011/

"The Rimé movement is a movement involving the Sakya, Kagyu and Nyingma schools of Tibetan Buddhism, along with Bon scholars......Having seen how the Gelug institutions pushed the other traditions into the corners of Tibet's cultural life, Jamyang Khyentse Wangpo and Jamgön Kongtrül compiled together the teachings of the Sakya, Kagyu and Nyingma, including many near-extinct teachings. Without Khyentse and Kongtrul's collecting and printing of rare works, the suppression of Buddhism by the Communists would have been much more final..... Rimé movement was universalistic (and encyclopaedic), rimed (pa) (the antonym of risu ch'edpa) meaning unbounded, all-embracing, unlimited, and also impartial."......Seyfort Ruegg quoted in Samuel, Goeffrey (1993). Civilized Shamans. Buddhism in Tibetan Societies, p. 538

"From June to August 2012, a survey and excavation to the Khardong city-site (so called “Khyung-lung dngul-mkhar”) and the Garuda cemetery have been conducted jointly by Institute of Archaeology, CASS and Tibetan Institute of Antiquities Preservation. The new findings reveal that the Garuda cemetery is a site which contains a large number of tombs from the Zhangzhung period, contemporary to the Han-to-Jin period in the Central Plain of China, and it bears a close relationship with the city-site of “Khyung-lung dngul-mkhar”..... it could be rated as the hitherto found earliest city-site in Tibet, and also one of the well preserved city-site with richest cultural deposits. Though the date of construction and being used is waiting for further study, the new findings are of great value for researches on the Zhangzhung city’s layout and evolution."...New Discovery of Zhangzhung Archaeology in Ngari, Tibet.....From：Chinese Archaeology Writer：Tong Tao Date：2012-09-03

Email ThisBlogThis!Share to TwitterShare to FacebookShare to Pinterest
Labels: Rimé