"The historian Arnold Toynbee (1889 – 1975) has described Afghanistan as a “roundabout of the ancient world” due to the masses of people that have passed through this region over the centuries. In modern times too, many of the world’s armies have passed through temporarily establishing control over this region, and still it refuses to be colonized."

"Oikoumenê .....Ecumene (also spelled œcumene or oikoumene) is a term originally used in the Greco-Roman world to refer to the inhabited universe (or at least the known part of it). The term derives from the Greek οἰκουμένη (oikouménē, the feminine present middle participle of the verb οἰκέω, oikéō, "to inhabit"), short for οἰκουμένη γῆ "inhabited world"..... 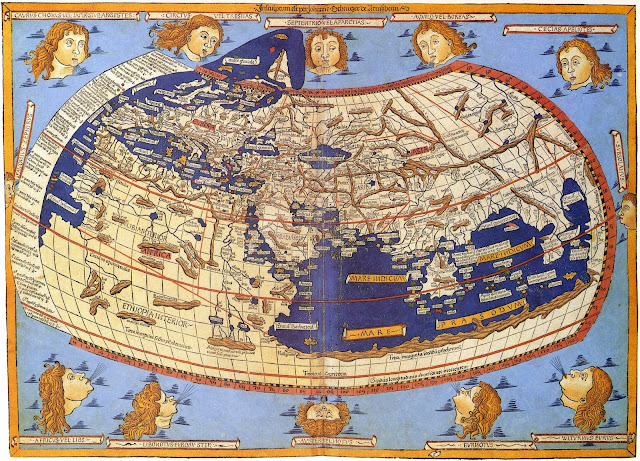 Ptolemy's description of the Oecumene ...A printed map from the 15th century (1482, Johannes Schnitzer, engraver).

"Anyone who, unlike me, already knows something about Afghanistan or Central Asia, or has read the posts here back to only June 26, should be able to understand the next passage......Europeans have a saying that “all roads lead to Rome”. .....From a European standpoint they may look as if they do. But Europe is one of the fringes of the Old World, and eccentric positions produce distorted views. Plant yourself, not in Europe, but in ‘Iraq, which is the historic centre of our Oikoumenê. Seen from this central position, the road-map of the Old World will assume a very different pattern. It will become evident that half the roads of the Old World lead to Aleppo, and half to Begrám. The second of these two names marks the site of the historic city of Kapisha-Kanish, at the southern foot of the Central Hindu Kush, where three roads meet after crossing the mountains.....Why particularly Aleppo and Begrám? I referred to the geopolitical significance of Aleppo in this post. Begrám is a staging-post en route to India. Cyrus the Great and his successor Darius captured it, though they did not cross the Indus. Alexander established a colony nearby named Alexandria of the Caucasus. Caucasus Indicus was an ancient name for the Hindu Kush. Another name for Begrám has been Kapisa.".....by: David Derrick....Reith Lectures 3.... The Old World’s eastern roundabout.....July 1 2008....https://davidderrick.wordpress.com 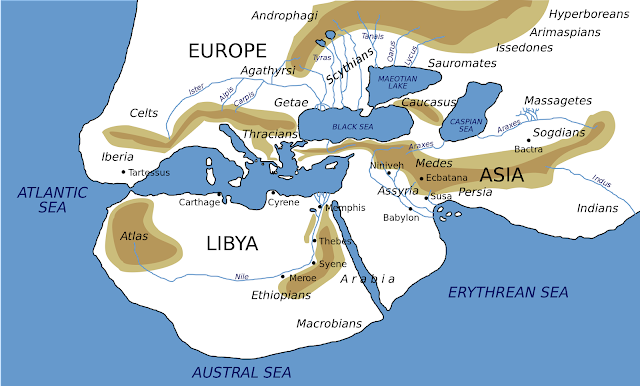 What the Ecumene (inhabited world) may have looked like according to Herodotus (5th century BC).

"......the Oikoumenê. He uses that word here to mean the “civilised” world, or rather the world in process of civilisation, but in a later book, Mankind and Mother Earth, he acknowledges that its literal Greek meaning is wider: “the Inhabited (Part of the World)”. ...https://davidderrick.wordpress.com

" Christianity: Ecumenism...of Classical Greek words: oikos, meaning a “house,” “family,” “people,” or “nation”; oikoumenē, “the whole inhabited world”; and oikoumenikos, “open to or participating in the whole world.....ideology that had prevailed since Constantine (4th century) and Justinian I (6th century)—according to which there was to be only one universal Christian society, the oikoumenē, led jointly by the empire and the church—was still the ideology of the Byzantine emperors. .”.....http://www.britannica.com 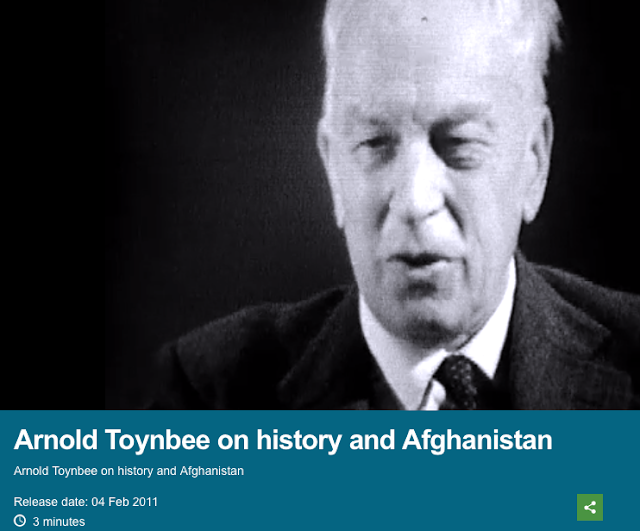 "During a trip across Afghanistan in 1960, the great British historian Arnold J. Toynbee reflected that "Afghanistan has been deluged with history and been devastated by it". .....Arnold Toynbee on history and Afghanistan...Adam Curtis clip.

"Afghanistan was for millennia at the crossroads of empires and host to passing trends and peoples.....at Tepe Fullol, we see stunning Bronze Age goblets made of gold, sifted from the mighty Oxus River (known today as the Amu Darya), inscribed with representations of bulls familiar in ancient Mesopotamia, more than 2,000km away. The exhibits from this site link the area with what has become known as the "Oxus cultural complex", a region that stretched further back in time, and across a wider expanse, than previously thought......This "Oxus civilisation" had an impact on the cultures of the Indus and Mesopotamia as far back as 2200BC. The lapis lazuli and tin mines of Tepe Fullol had made early inhabitants rich through trade, and the burial grounds found here also give evidence of the early influence of the Zoroastrian religion."....http://www.timeshighereducation.co.uk

"Toynbee began his Study of History in 1922 , inspired by seeing Bulgarian peasants wearing fox-skin caps like those described by Herodotus as the headgear of Xerxes’ troops.....Toynbee was severely criticized by other historians....the critique has been leveled at his use of myths and metaphors as being of comparable value to factual data....Toynbee argued that "Civilizations die from suicide, not by murder." .....He expressed great admiration for Ibn Khaldun (1332 - 1406 AD...Tunisian historian) and his book Muqaddimah ("Introduction", known as Prolegomena in Greek)." .....https://www.alislam.org

“All roads lead to Balkh,” uttered Gurdjieff, referring to the Sufic origin of all systems. Yesai Narai writes, “Balkh is the town often associated with Padmasambhava, and Rabia and Rumi as well. Although Padmasambhava is usually thought to be Indian, it is possible that he is from the Afghanistan region also associated with his name.” ....http://balkhandshambhala.blogspot.com/2012/10/balkh-and-sufism.html