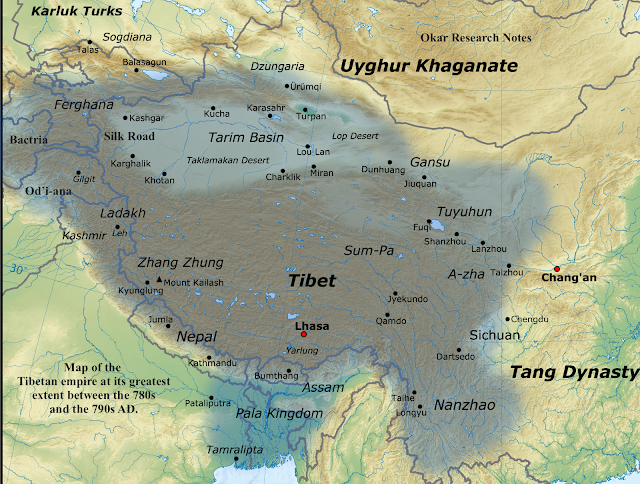 "In 708 AD, Nazaktar Khan, a Turk Shahi prince in alliance with the Tibetan Empire, captures Bactria from the Umayyads and established a fanatic Buddhist rule, including the beheading of the abbot who converted..... In 715 Ibn Qutaybah recaptured the region for the Umayyads and Tibet switched sides to ally with him against the Turk Shahis. In retribution for the insurrection Qutaiba inflicted heavy damage on Navbahar resulting in many monks fleeing to Khotan and Kashmir. The Muslims destroyed select monasteries that harbored opposition but then let them rebuild and prosper to exact a pilgrim tax.".....Buddhist-Muslim Doctrinal Relations: Past, Present, and Future by Alexander Berzin

"The Shahi (Devanagari: शाही), Sahi, also called Shahiya or Hindu Shahi dynasties ruled one of the Middle kingdoms of India which included portions of the Kabulistan and the old province of Gandhara (now in northern Pakistan), from the decline of the Kushan Empire in the 3rd century to the early 9th century. The kingdom was known as "Kabul Shahi" (Kabul-shāhān or Ratbél-shāhān in Persian کابلشاهان یا رتبیل شاهان) between 565 and 879 AD when they had Kapisa and Kabul as their capitals, and later as Hindu Shahi.....The Shahis of Kabul/Gandhara are generally divided into the two eras of the so-called Buddhist-Shahis and the so-called Hindu-Shahis, with the change-over thought to have occurred sometime around 870 AD.".....Encyclopædia Britannica. 2006. "Shahi Family"

"....870 A.D. marks the first time that the Kingdom of Shambhala actually came under Moslem domination. The Hindu Shahis recaptured Kabul and the rest of their Kingdom after the death of the conqueror Yaqub but never again maintained Kapisa as their capital.".....http://www.dharmafellowship.org/biographies/historicalsaints/lord-padmasambhava.htm#eightcentury 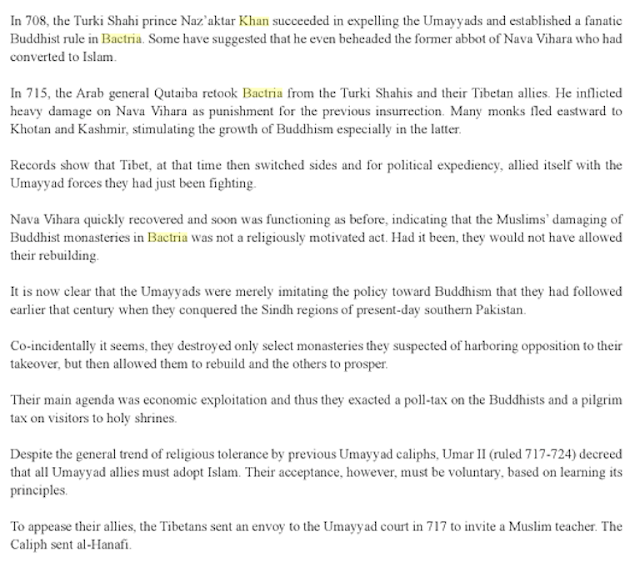 "The Tibetan Empire existed from the 7th to 9th centuries AD....The varied terrain of the empire and the difficulty of transportation, coupled with the new ideas that came into the empire as a result of its expansion, helped to create stresses and power blocs that were often in competition with the ruler at the center of the empire. Thus, for example, adherents of the Bön religion and the supporters of the ancient noble families gradually came to find themselves in competition with the recently introduced Buddhism. The empire collapsed into civil war in the 840s."

"The Chinese Princess Wencheng (Tibetan: Mung-chang Kung-co) departed China in 640 to marry Songtsän Gampo's son. She arrived a year later. This is traditionally credited with being the first time that Buddhism came to Tibet, but it is very unlikely Buddhism extended beyond foreigners at the court."

"Around 760 AD....King Trisong Detsen, the 38th king of the Yarlung dynasty and the first Emperor of Tibet (742–797), invited the Nalanda University abbot Śāntarakṣita (Tibetan Shiwatso) to Tibet. Śāntarakṣita started the building of Samye, the first Buddhist monastery on Tibetan ground....Demonical forces hindered the introduction of the Buddhist dharma, and Padmasambhava was invited to Tibet to subdue the demonic forces."

"The Great Khorasan Civilization ('Land of the Rising Sun') had numerous great city/states, each with its own King and Queen, Royal Court, and Castle….Balkh (Bactra) was the most legendary and grandest, not only a legend in 7th Century pre-Buddhist Tibet but also throughout ancient China, India, the Middle East and Greece."

"Islam and Tibet – Interactions along the Musk Routes....The first encounters between the Islamic world and Tibet took place in the course of the expansion of the Abbasid Empire in the eighth century. Military and political contacts went along with an increasing interest in the other side. Cultural exchanges and the transmission of knowledge were facilitated by a trading network, with musk constituting one of the main trading goods from the Himalayas, largely through India. From the thirteenth century onwards the spread of the Mongol Empire from the Western borders of Europe through Central Asia to China facilitated further exchanges. The significance of these interactions has been long ignored in scholarship." ...Islam and Tibet – Interactions along the Musk Routes....December 2010......Edited by Anna Akasoy, Oriental Institute, University of Oxford, UK; Charles Burnett, Warburg Institute, University of London, UK and Ronit Yoeli-Tlalim, Wellcome Trust University Award holder, Department of History, Goldsmiths, University of London, UK 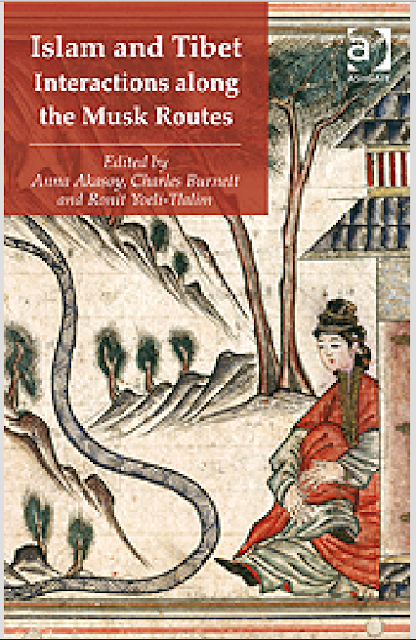 "In 'The Tibetan Empire in Central Asia', Beckwith provides a narrative of events running from around 600 to 850 CE, with the greatest detail in the first half of the 8th century. He presents a Tibetan perspective, but uses Chinese and Arab sources and gives what is effectively a general history of the Tarim basin and surrounding areas........The early 8th century saw the Tibetans turn their attention to the "Western Regions" in the Pamirs and Tukharistan. The Arabs under general Qutayba fought the Western Turks, with interference from both Tibetan and Chinese. In 715 the Arabs took Ferghana and a raiding party reached Kashgar, bringing them to the borders of the Tang Empire........Conflict between China and Tibet continued, with the Tibetans allying with the Türgis confederation of the Western Turks......Beckwith's narrative continues in less detail (the Old Tibetan Annals end in 765) down to 866, when only bits and pieces remained of the once powerful Tibetan Empire.."...The Tibetan Empire in Central Asia: A History of the Struggle for Great Power among Tibetans, Turks, Arabs, and Chinese during the Early Middle Ages. Princeton: Princeton University Press, 1987;

"From 715 until approximately 727 AD, Tibet had a military alliance with the Umayyads. During that period, Caliph ‘Umar II decreed that all Umayyad allies should follow Islam. As an expedient means not to jeopardize the alliance, the Tibetan Empress Jincheng requested an Islamic cleric be delegated to Tibet. The Caliph sent al-Salit bin-Abdullah al-Hanafi. The Tibetan Buddhists, however, do not seem to have taken any sincere interest in Islam. There are no records of any interfaith dialogue or Tibetan Buddhist conversions to Islam having taken place as a result of this visit. The cool reception was most likely due to the influence of the xenophobic opposition faction at the Tibetan imperial court."...Source: Buddhist-Muslim Doctrinal Relations: Past, Present, and Future by Alexander Berzin. Originally published with extensive footnotes in Buddhist Attitudes toward Other Religions, ed. Perry Schmidt-Leukel. St. Ottilien: EOS Verlag, 2008, p. 212 – 236

"Princess Jincheng, the ethnic Han Chinese Empress, was a devout Buddhist and brought a Han Chinese monk with her to teach the ladies at the Tibetan court......in 737 AD, she gave asylum to Buddhist refugee monks fleeing an anti-Buddhist persecution in Khotan...... She arranged for refugee Buddhist monks from Khotan and Han China to receive asylum in Tibet and had seven monasteries built for them, including one in Rasa....In 741 AD, Tibet sent a mission to China to announce the death of Princess Jincheng and ask for peace, but China refused."....The History of the Early Period of Buddhism and Bon in Tibet .......The Empire of the Early Kings of Tibet

"The next Buddhist-Muslim doctrinal interaction took place during the last half of the eighth century CE, during the ‘Abbasid Caliphate. Caliph al-Mahdi, followed by Caliph al-Rashid, invited Buddhist scholars from India and the Nava Vihara monastery in Balkh to the House of Knowledge (Ar. Bayt al-Hikmat) in Baghdad. There, he commissioned them to help translate primarily medical and astronomical texts from Sanskrit into Arabic. Ibn al-Nadim’s late tenth-century CE Book of Catalogues (Ar. Kitab al-Fihrist), however, also listed several Buddhist works that were rendered into Arabic at that time, such as an account of Buddha’s previous lives, The Book of the Buddha (Ar. Kitab al-Budd). The text was based on two Sanskrit works: A Rosary of Previous Life Accounts (Skt. Jatakamala) and Ashvaghosha’s Deeds of the Buddha (Skt. Buddhacarita)."....Source: Buddhist-Muslim Doctrinal Relations: Past, Present, and Future by Alexander Berzin. Originally published with extensive footnotes in Buddhist Attitudes toward Other Religions, ed. Perry Schmidt-Leukel. St. Ottilien: EOS Verlag, 2008, p. 212 – 236

"Buddhists and Muslims have interacted with one another culturally, politically, economically, and sometimes militarily for the last thirteen and a half centuries. Depending on the place, the time, and the individual persons and governments involved, the interaction in all these spheres has spanned the spectrum from friendly to hostile.....Much attention has been paid to the history of these areas of interaction, but less has been directed toward an analysis of doctrinal relations. In this paper, after a survey of this facet of past and present relations, I should like to examine the prospects and grounds for future dialogue. The discussion will focus primarily on the Buddhist viewpoint toward doctrinal engagement, particularly within the Indo-Tibetan-Mongolian cultural spheres."....https://drkokogyi.wordpress.com/2011/09/23/buddhist-muslim-doctrinal-relations-past-present-and-future/ 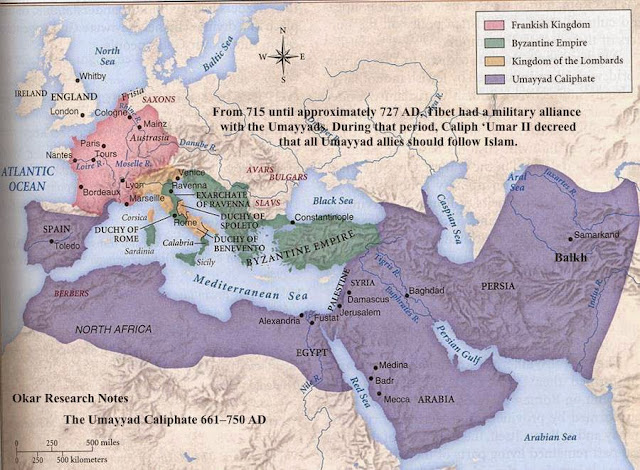 "The Umayyad and Abbasid Caliphates......The earliest contact between Buddhist and Muslim populations was in present-day Afghanistan, eastern Iran, Uzbekistan, Turkmenistan, and Tajikistan when the region came under the rule of the Arab Umayyad Caliphate in the mid-seventh century AD. The Umayyad Arab author, ‘Umar ibn al-Azraq al-Kermani, took interest in explaining Buddhism to his Islamic audience. Consequently, at the beginning of the eighth century AD, he wrote a detailed account of the Nava Vihara Monastery in Balkh, Afghanistan, and the basic Buddhist customs there, explaining them in terms of analogous features in Islam. Thus, he described the main temple as having a stone cube in the center, draped with cloth, and devotees as circumambulating it and making prostration, as is the case with the Kaaba in Mecca."...https://drkokogyi.wordpress.com/2011/09/23/buddhist-muslim-doctrinal-relations-past-present-and-future/ 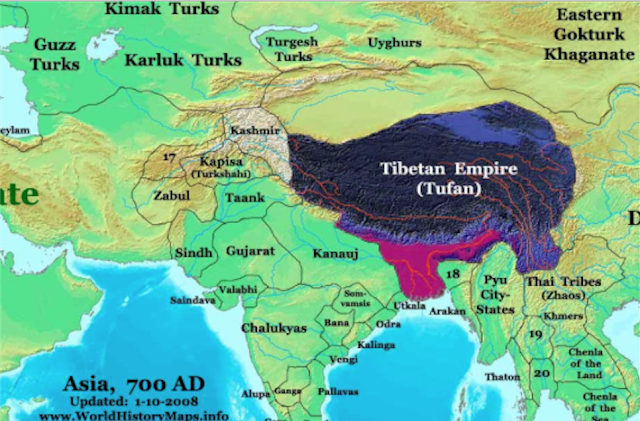