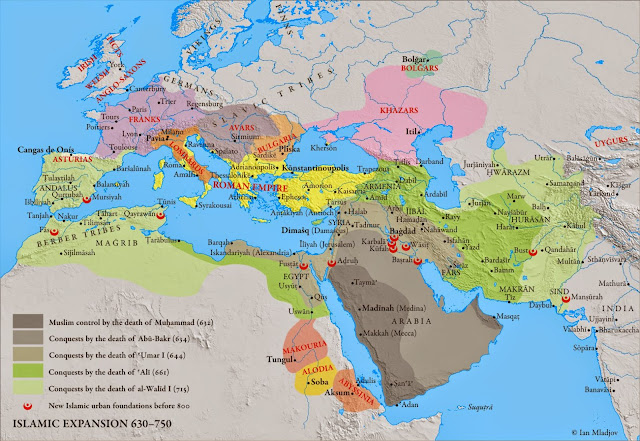 "Baharats or Buddha idol temples which were called Now Bahar in Balkh, and Beit-ul Sanam in Bamian, existed after the emergence of Islam and a long time after that. Each year Buddhist pilgrims from China and Khotan used to visit the sacred Buddha temples in Khorassan."....

"The second part of Hamavi's chronicle depicts other aspects of Iranian influence on Buddhism and the impact of Buddhism on the Iranian civilization: 'The religious custodian of the Now Bahar Temple was called a Barmak and the Barmakians descended from these priests and inherited the title from generation to generation. Now Bahar Temple was constructed to compete with the Kaaba in Mecca. Its walls were adorned by precious jewels and covered by gold embroidered curtains. On many occasions and specially during spring the temple was adorned with beautiful flowers. For that reason the temple was called Now Bahar. It was in that season that pilgrims flocked to the temple from all over Iran. The temple was capped with a dome called Asten that was 100 gaz (nearly 93 meters) high and was adorned by flags. Many pilgrims from Kabul and Indo-China visited the temple, worshiped the idol and kissed the hands of the Barmak or the grand custodian of the temple." ......Historical Geography of Eastern Caliphate Lands, Guy Listering, translated by Mahmood Erfan, 1958, p. 447 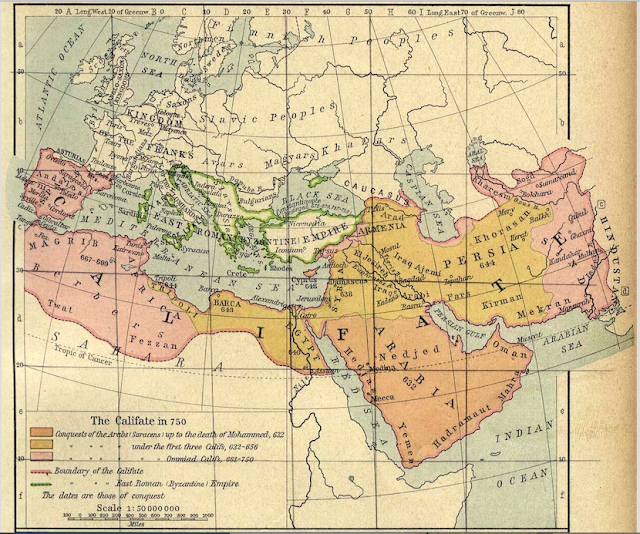 "According to Masoodi Now Bahar, the giant temple in Balkh was called Mah Bonyad during Manouchehr Shah. At that time the custodian of the temple was greatly respected by the kings and all the citizens obeyed his orders and presented much property and money to that idol temple. As we said the custodians of the temple were called Baramakeh and Khalid Barmak was the last custodian of the temple. This was a very lofty building and adorned by spears on which green silk was hung. ....Yaqoot Hamavi (539-626 A.H.) relates a lengthy story from Omar ibne Azraq Kermani about Now Bahar. Qazvini and Mohammad ibne Mahmood ibne Ahmad Toosi have also described the temple like that written by Hamavi. ...Rooh-ul Mazaheb, translated by Abolqasem Payandeh, vol. 1, p. 589. - See more at: http://www.iranchamber.com/religions/articles/iranians_role_expansion_buddhism.php#sthash.qpHhAocQ.dpuf....http://www.iranchamber.com/religions/articles/iranians_role_expansion_buddhism.php

"Referring to Balkh, the writer of Turkestan Nameh says: "Balkh was the most ancient city in the Amu Darya region. Muslim writers have rightly called Balkh the mother of cities. Balkh had been the capital of semi-mythological Bacteria which was later converted into a western Satrap (Bacterian Satrap) of the Achamenid Dynasty and during the time of Darius, Marviania (or Marv district) was part of that territory." ....

"The following inscription was written on the gate of the Now Bahar Temple: "Buddha says the courts of the kings need wisdom, patience and money." Under that inscription an Arabic script says: "Buddha is in the wrong because a man who possesses one of these qualifications would never agree to be a vassal in the court."....Ajayeb-ul Makhlooqat, edited by Manoochehr Sotoodeh, p. 279. ..http://www.iranchamber.com/religions/articles/iranians_role_expansion_buddhism.php

"Idries Shah wrote in "The Sufis":...."Jabir Ibn el-Hayyan was for a long time a close companion of the Barmecides, the viziers of Haroun el-Rashid.These barmakis were descended from the priest of the Afghan Buddhist shrines, and were held to have at their disposal the ancient teaching which had been transmitted to them from that area. Haroun el-Rashid was a constant associate of Sufis, and there are instances on record of his making reverential pilgrimages to meet Sufi masters." (p. 196)"

"A comment by M. Sufilight:....It is also known that at the time of Geber it can be found that one of the strongholds of the Afghan-Sufi-Buddhists was at Balkh, and at the monastery known as Nava Vihara.....This monastery and nearby shrines was through many centuries the hot-bed of esoteric sufi-buddhist-zoroaster teachings. These doctrines lived side by sides at that place. And no Buddhist was allowed entry to it unless he first was known to have written a paper on Buddhism.....The Nava Vihara Monastery was it is said build on an old fire-temple of the Zoroastrians. A number of their temples had a form like a CUBE and was placed in the center of the shrine almost similar to the Kaaba at Mekka.....The Nava Vihara Monastery was for centuries compared on equal foot with the highly regarded monastery called Nalanda Monastery or Nalanda University.".....http://www.theosophy.com/theos-talk/200912/tt00012.html

"The earliest contact between Buddhist and Muslim populations was in present-day Afghanistan, eastern Iran, Uzbekistan, Turkmenistan, and Tajikistan when the region came under the rule of the Arab Umayyad Caliphate in the mid-seventh century CE. The Umayyad Arab author, ‘Umar ibn al-Azraq al-Kermani, took interest in explaining Buddhism to his Islamic audience. Consequently, at the beginning of the eighth century CE, he wrote a detailed account of the Nava Vihara Monastery in Balkh, Afghanistan, and the basic Buddhist customs there, explaining them in terms of analogous features in Islam. Thus, he described the main temple as having a stone cube in the center, draped with cloth, and devotees as circumambulating it and making prostration, as is the case with the Kaaba in Mecca....Al-Kermani’s writings were preserved in the tenth-century CE work, Book of Lands (Ar. Kitab al-Buldan) by Ibn al-Faqih al-Hamadhani. Buddhist scholars, however, do not seem to have shown reciprocal interest in explaining the Muslim customs and beliefs to the Buddhist audience. There is no recorded evidence of any such description at this time."...https://drkokogyi.wordpress.com/2011/09/23/buddhist-muslim-doctrinal-relations-past-present-and-future/....Source: Buddhist-Muslim Doctrinal Relations: Past, Present, and Future by Alexander Berzin. Originally published with extensive footnotes in Buddhist Attitudes toward Other Religions, ed. Perry Schmidt-Leukel. St. Ottilien: EOS Verlag, 2008, p. 212 – 236 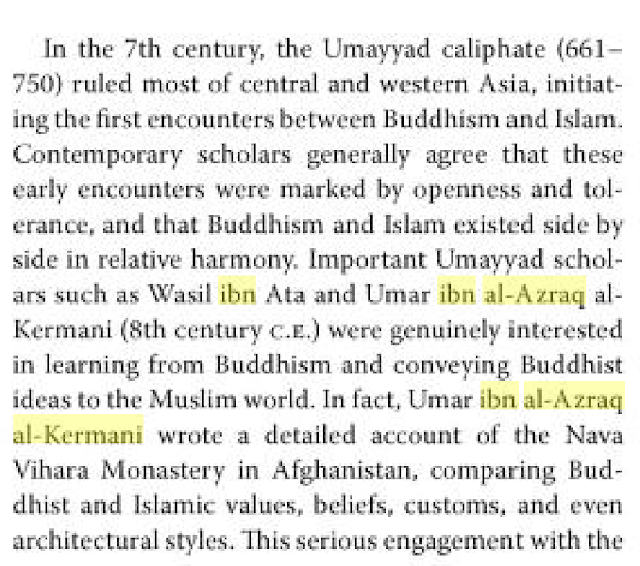 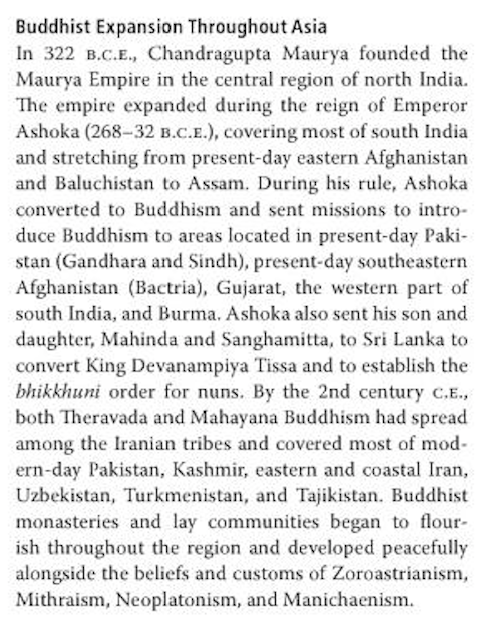 Cultural Sociology of the Middle East, Asia, and Africa: An Encyclopedia.....edited by Andrea L. Stanton

From Bharata to India: The Rape of Chrysee.....By M. K. Agarwa 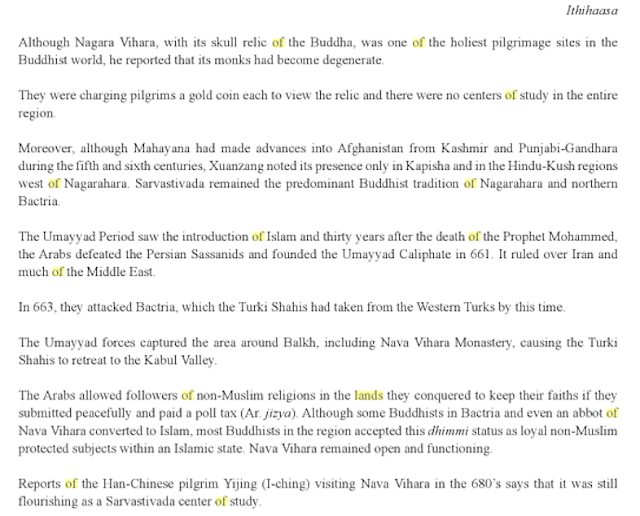 Book of Lands by Al-Kermani

"Buddhism in west, central, and south Asia from 1200 to 1900 AD is noted primarily for its disappearance from the region during this period."

"The term Baramakeh or Barmaki in this tribe is derived from Parmookhia in Sanskrit language which means a head (which is the customary title of the custodians of the Now Bahar Temple in Balkh). ....In his Albaldan, Ibne Faqid Hamedani says: "Before turning to feudals the Barmakians enjoyed high position and reputation and were idol worshippers. The citizens of Mecca had told them about the custom of the Qoraish tribe and Arabs in Mecca who worshipped the idols in Kaaba. This induced the Barmakians to build a rival giant idol temple in Balkh. They called this temple the Now Bahar Temple or the new temple. They respected the temple and presented gifts to the temple and adorned it with silk and ornamented the dome with flags. The dome of the temple was 100 x 100 gaz (one gaz is about 93 cm) in size. 360 nosegays (cells) were constructed around the temple in which the temple's servants and guards dwelt. Each day one servant served the temple and thus in one year 360 servants served the temple by turn so that each servant worked one day in the year. The grand custodian of the temple was called Barmak or a custodian from Mecca or ruler of Mecca. Thus those who were appointed as the custodian of the Now Bahar Temple were called Barmaks." ....http://www.iranchamber.com/religions/articles/iranians_role_expansion_buddhism.php

"The kings of China and Kabul also worshipped idols and whenever they traveled to the Now Bahar Temple they worshipped the grand idol. Thus all the properties surrounding the Now Bahar Temple and seven hundred villages in the Takharestan region known as Zavan which was 8 x 4 farsangs in size were owned by the Barmakis. All these villages were ruled by Barmaki headmen. Their sway continued until the time of Othman, the caliph, when Khorassan was conquered by Ibne Offan. .....When Khorassan was taken the grand custodian of the Now Bahar Temple was Barmak, the father of Barmak and grand father of Khalid.".....http://www.iranchamber.com/religions/articles/iranians_role_expansion_buddhism.php 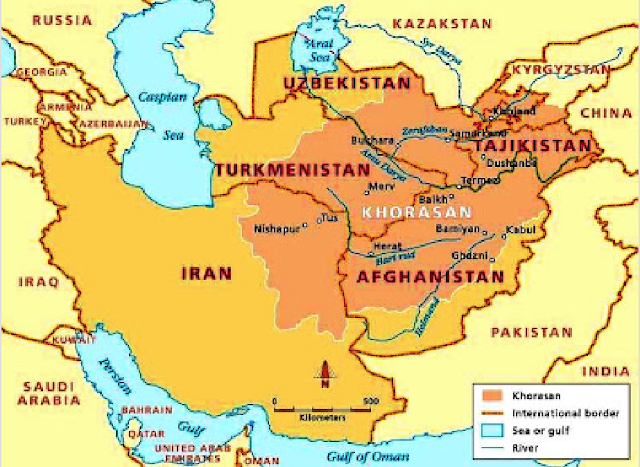