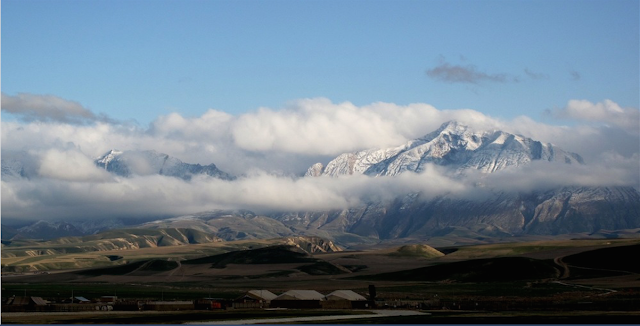 "Koh e Alburz.....(Romanized as Kuh i Elburz, Gory Koh-i-Elburz, Kohe Alborz, Kuh i Alborz (Persian: کوه البرز‎ high mountain) is a mountain a ridge of the Hindu Kush in Afghanistan, Balkh Province. The ridge is elongated to the south of the ancient city of Balkh, which is about 25 kilometers northwest from the city of Mazar-i-Sharif. It is a tertiary, elongated ridge with steep slopes to the north and south. The comb has short canyons. Between the breaking points are the small river Schadyan and Marmal mountain. The German ISAF troops call their military camp Camp Marmal. Above this ridge, the two Buddhist monasteries as Nava Vihara Top i Ruslam (Persian: تپه رستم‎ Rustam hill or Rustam Hat) and Takht e Rustam (Persian: تخت رستم‎ Rustam's throne) and fire temple of Nava Vihara. 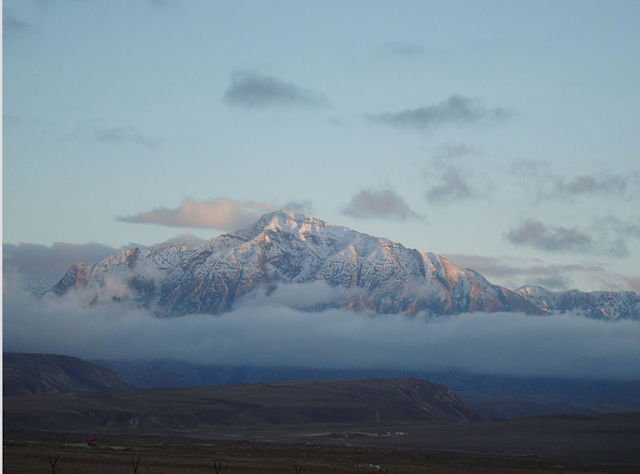 "The name Elbrus is derived by metathesis from Alborz. The name Alborz is derived from that of Harā Barazaitī, a legendary mountain in the Avesta. Harā Barazaitī reflects Proto-Iranian *Harā Bṛzatī. *Bṛzatī is the feminine form of the adjective *bṛzant- "high", the ancestor of modern Persian boland (بلند) and Barz/Berazandeh, cognate with Sanskrit 'Brihat' (बृहत्). Harā may be interpreted as "watch" or "guard", from an Indo-European root *ser- "protect". In Middle Persian, Harā Barazaitī became Harborz, Modern Persian Alborz, which is cognate with Elbrus." 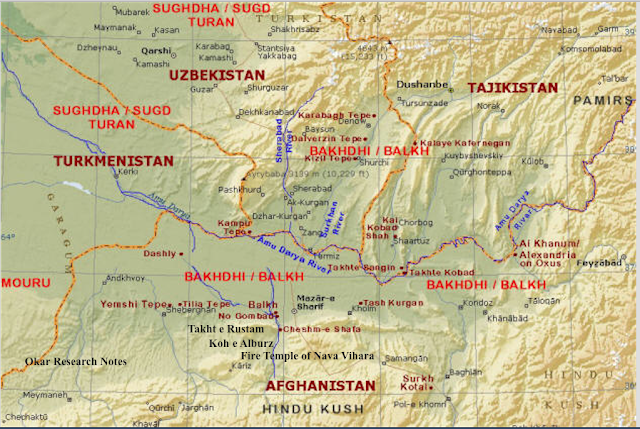 The Nava Vihāra (Sanskrit: नवविहार "New Monastery", modern Nowbehār, Persian: نوبهار‎) was two Buddhist monasteries close to the ancient city of Balkh in northern Afghanistan. The temples and monasteries of Nava Vihara are spread over a very large area about 20 kilometres (12 mi) south of Balkh above Chesme-ye Safā (Persian: چشمه صفا‎ "Clear Spring"), not far from the Koh e Alburz. 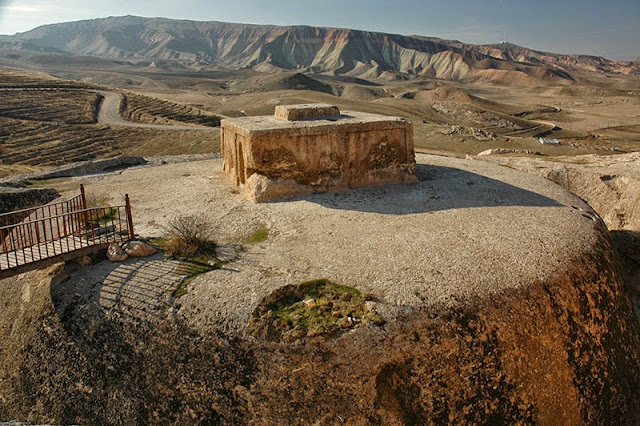 Takht-e-Rustam.....The thrown of the hero of the world. A buddhist stupa on a hill in Aybak, a medieval caravan stop, Samangan province in Northern Afghanistan. It dates back all they way to the 4th and 5th centuries. 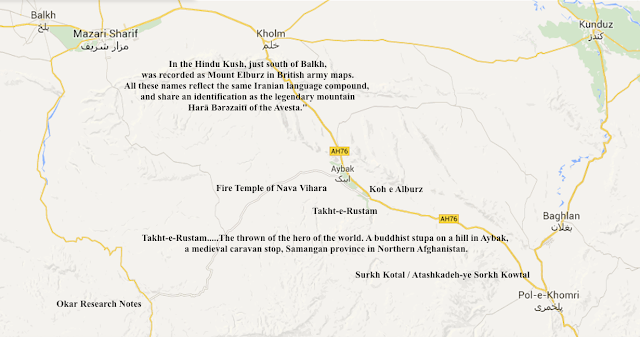 "Zoroastrians may identify the range with the dwelling place of the Peshyotan, and the Zoroastrian Ilm-e-Kshnoom sect identify Mount Davamand as the home of the Saheb-e-Dilan ('Masters of the Heart'). In his epic Shahnameh, the poet Ferdowsi speaks of the mountains "as though they lay in India." This could reflect older usage, for numerous high peaks were given the name and some even reflect it to this day, for example, Mount Elbrus in the Caucasus Mountains, and Mount Elbariz (Albariz, Jebal Barez) in the Kerman area above the Strait of Hormuz. As recently as the 19th century, a peak in the northernmost range in the Hindu Kush system, just south of Balkh, was recorded as Mount Elburz in British army maps. All these names reflect the same Iranian language compound, and share an identification as the legendary mountain Harā Bərəzaitī of the Avesta."

"Harā Bərəzaitī[.....literally meaning "High Watchpost", is the name given in the Avestan language to a legendary mountain around which the stars and planets revolve.....Harā Bərəzaitī reflects Proto-Iranian *Harā Bṛzatī. Harā may be interpreted as "watch" or "guard", from an Indo-European root *ser- "protect". *Bṛzatī is the feminine form of the adjective *bṛzant- "high", which is cognate with Celtic brigant- (as in the Brigantes) and with Germanic burgund- (as in the Burgundians). Hence 'Harā Bərəzaitī' "High Watchpost.".....In the ancient Zoroastrian scriptures of the Avesta, Harā Bərəzaitī is the source of all mountains of the world, that is, all other mountains and ranges are but lateral projections that originate at High Hara. So, for instance, the mountains of the Hindu Kush (Avestan: ishkata; Middle Persian: kofgar) appear in Yasht 19.3 as one of the spurs of High Hara."

"In Avestan cosmogony, High Harā is the geographic center of the universe, immediately surrounded by the steppes of the Airyanem Vaejah, the first of the seven lands created by Ahura Mazda. It is a polar mountain around which the stars revolve; it is also the mountain behind which the sun hides at night.....The pinnacle of High Hara is Mount Hukairya, "Of good activity" (Yasht 10.88), from which springs the source of all waters of the world. These waters rush down from the mountain as the mighty world river Arədvī Sūrā Anāhitā....... The sacred plant haoma grows on Harā. It is also the home of the yazata Mithra......

"...water too comes in from Harborz” (Bd. 11.6); for the mythical river Arədvī Sūrā Anāhitā was held to pour down from the mountain’s peak into the ocean Vourukaša (Yt. 5.3; cf. Bd. 10.5-6), being thus the source of all the waters of the world."....http://www.iranicaonline.org/articles/alborz-massif-iran

"Ferdowsī in the Šāh-nāma refers to the Alborz mountains as though they lay in India......In Ferdowsi's Shahnameh, where the mountain in Ērānvēj is named Alborz, Mount Hara is the place of refuge for Fereydun when he is sought for by the spies of Zahhāk. It is the dwelling-place of the Simorgh, where he brings up the infant Zāl. It is also the region where Kai Kobad dwells before being summoned to the throne of Iran by Rostam."

Mithra...."In Yt. 10.50 and Yt. 12.23 the towering, luminous Harā mountains and their many outcrops are the abode of Mithra, “where neither night nor darkness, neither a cold nor a hot wind, neither harmful pestilence nor the daēva-created pox (rules);”....http://www.iranicaonline.org/articles/alborz-massif-iran

"......borz, “mound” ......The feminine gender is surprising, for it does not occur in other mountain names among the Indians and Iranians; these are normally masculine. Linguistically too, then, the name Alborz is unusual......The name of the range probably means “high watch/guard,” a common designation all over the world for mountains and high places. Av. harā- (fem. “watch, guard, defence,” not attested as an appellative) is from the OIr. har- “to pay attention to, watch over, protect” (AirWb, col. 1787), I.E. 2ser- (Lat. ser-v-are; see J. Pokorny, Indogermanisches etymologisches Wörterbuch, Berne and Munich, 1959, p. 910). The epithet bərəzaitī is *bṛzatī, feminine from OIr. *bṛzant- “high;” the equivalent in southwest Iranian is *bṛdant-, which in New Persian produces boland after regular sound changes. Cf. NPers. bālā (“high”) from bālā’ (“height”) from *bard-; NPers. barz/borz, “mound” (frequent in toponymy); further OInd. bṛhant- (“high, majestic”), German Berg, Burg, Burgund (IE. bheregh-, Pokorny, pp. 140f.).".....www.iranicaonline.org

"Rostam or Rustam (Persian: رُستَم‎, pronounced [ɾos'tæm, ɾʊs'tæm]) is the epic hero of the Persian epic Shahnameh in Persian mythology, and son of Zal and Rudaba. In the story, Rostam and his predecessors were natives of Zabol, the city in Zabulistan region of Sistan province in (present-day eastern Iran). Rostam's mother Rudaba was a princess of Kabul......In some ways, the position of Rostam in the historical tradition is parallel to that of Surena, the hero of the Battle of Carrhae. Rostam was always represented as the mightiest of Iranian paladins (holy warriors), and the atmosphere of the episodes in which he features is strongly reminiscent of the Parthian period. He was immortalized by the 10th-century Persian poet Ferdowsi in the Shahnameh, or Epic of Kings, which contains pre-Islamic Iranian folklore and history.".....

"The Naubahar / No Gombad ruins are located just south of the city of Balkh and are variously described as being those of a mosque, a Zoroastrian fire temple, and a fire temple that was converted into a Buddhist temple and then into a mosque. 'Nau' or 'no' can mean 'new' or 'nine'. 'Bahar' can mean 'spring'. 'No Gombad', a more recent name, means nine domes. The ruins are also known as Khoja Piada, Masjid-E Haji Piyada, and Haji Nau Peyodya (new walking pilgrim to Hajj). An alternative spelling is Noh Gumbad. ....The indications are that the present structure, dated between 850 - 900 CE, was built over an earlier structure that could have been constructed as early as the first century BCE. ....The structure measures some 20 by 20 metres or 65 by 65 feet. The design work on the columns also features a paisley-like boteh motif......Various Islamic authors such as twelfth and thirteenth century CE Islamic authors, Yaqut ibn-Abdullah (al-Rumi) and Shams ibn-Khallikan, note that the Naubahar structure was a Zoroastrian temple. An earlier tenth century CE author, al-Masoudi, adds in Muruuju dh Dhabab that Barmak, the eponymous ancestor of the renowned Barmaki (also Barmakiyan) family was a Magian (cf. magi, Zoroastrian priests - a name that Islamic authors gave Zoroastrians) and high priest of great fire-temple at Naubahar.".....http://www.heritageinstitute.com/zoroastrianism/balkh/balkh2.htm

"There are many shared elements of undoubted significance in Indo-Iranian cosmography. Comparison of the various ancient Indian cosmographic systems and the Avesta or, indeed, the whole body of Zoroastrian writings, including the Pahlavi literature of the ninth century, reveals a number of common features: the concept of Mount Harā and that of Mount Meru, or Sumeru, in Brahmanical, Buddhist, and Jainist cosmography; the idea of the seven regions of the earth, the Iranian karšvar- (Pahlavi kešwar) and the Indian dvīpa; the idea of a central region, Xᵛaniraθa (Pahlavi Xwanirah) and Jambūdvīpa; the idea of the “Tree of All Seeds” in the Vourukaša sea, south of the Peak of Harā and the Jambū tree, south of Mount Meru ...... These elements, common to the Iranian and Indo-Aryan vision of the earth, are certainly to be considered essentially mythical when related to the historical periods during which these groups were living on one side or the other of the Indus. Yet they do not seem to be totally devoid of any geographical reference if the so-called nordic cycle of Indo-Iranian mythology is anything to go by."....AVESTAN GEOGRAPHY.....http://www.iranicaonline.org

Camp Marmal is adjacent to the Maulana Jalaluddin Balkhi International Airport in Mazar-i-Sharif, Afghanistan, at the foot of the Hindu Kush mountains. The camp gets its name from the bordering Marmal Mountains. 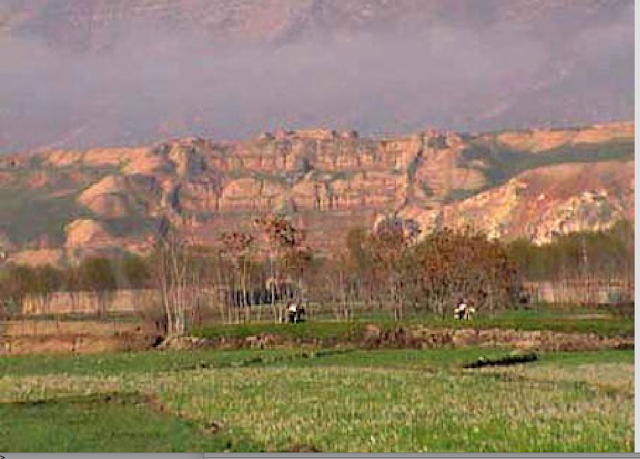 "After the Islamic conquest of Persia, Zoroastrian fire temples, with their four axial arch openings, were usually turned into mosques simply by setting a mihrab (prayer niche) on the place of the arch nearest to qibla (the direction of Mecca). This practice is described by numerous Muslim sources.... Zoroastrian temples converted into mosques in such a manner could be found in Bukhara, as well as in and near Istakhr and other Iranian cities."

"The name Khorasan is a compound word Khur+san meaning Sun+land. '-san' is an older form of '-shan' and '-stan'. Most authors take this to mean land of the rising sun since Khorasan is today in the east of Iran."