"Prince Shotoku (574-622) promoted Buddhism and it took hold. Still, Japan would never see a full conversion away from its indigenous religion, as occurred to a much greater extent across pagan Europe with the introduction of Christianity. Rather, Japanese absorbed Buddhism gradually, mixing it with local folk religions." ......http://www.japantimes.co.jp/news/2007/09/04/reference/japans-shinto-buddhist-religious-medley/#.VIWqvtb8Smw 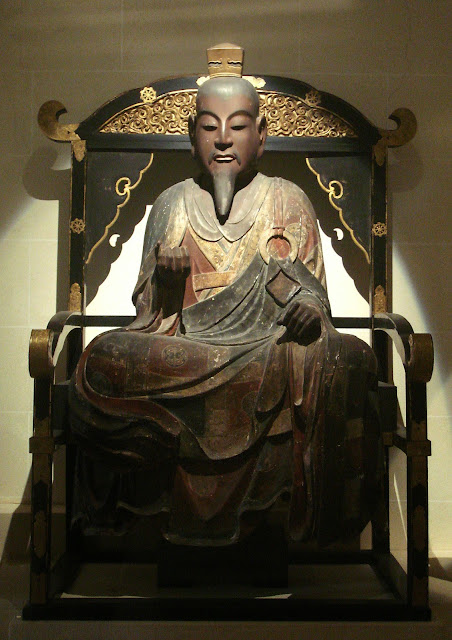 "Most Japanese do not exclusively identify themselves as adherents of a single religion; rather, they incorporate elements of various religions in a syncretic fashion known as Shinbutsu shūgō (神仏習合 amalgamation of kami and buddhas)...... Shinbutsu Shūgō officially ended with the Shinto and Buddhism Separation Order of 1886, but continues in practice. Shinto and Japanese Buddhism are therefore best understood not as two completely separate and competing faiths, but rather as a single, rather complex religious system.".....Scheid, Bernhard. "Religion in Japan". 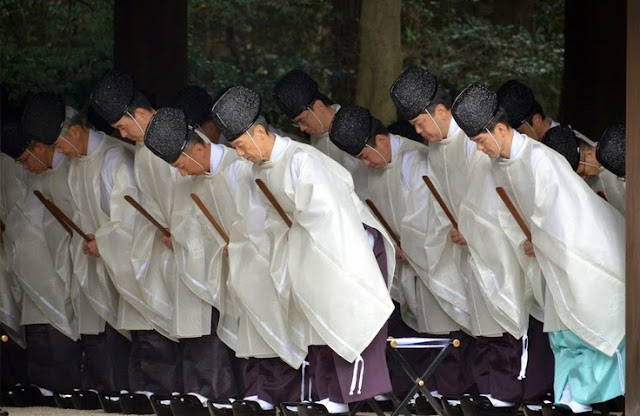 "Japan is the land of Yaoyorozu no Kamigami (the 8 million gods). Among them are a vast pantheon of deities with well-defined personas. Perhaps most important is Amaterasu Omikami, the sun goddess and legendary ancestor of the Imperial family.....Ever since Buddhism was introduced to Japan in 552 (some say 538), Japan has seemed uncertain about how to weave it into its cosmology.....The syncretism, or weaving together of religions, would continue over centuries...Buddhist temples started sprouting up next to Shinto shrines, to be called “jingu-ji,” meaning “shrine-temples.” By the 16th century, such mixing and matching had become official policy.....during the Meiji Era (1868-1912) push for a State Shinto purged of its foreign Buddhist influences. At Tsurugaoka Hachiman-gu shrine in Kamakura, Kanagawa Prefecture, Buddhist artifacts were burned and otherwise removed."....Japan’s Shinto-Buddhist religious medley......BY ERIC PRIDEAUX

"Prince Shōtoku (聖徳太子 Shōtoku Taishi.....572 – 622 AD), also known as Prince Umayado (厩戸皇子 Umayado no ōji?) or Prince Kamitsumiya (上宮皇子 Kamitsumiya no ōji?), was a semi-legendary regent and a politician of the Asuka period in Japan who served under Empress Suiko. He was a son of Emperor Yōmei and his younger half-sister Princess Anahobe no Hashihito.....Over successive generations, a devotional cult arose around the figure of Prince Shōtoku for the protection of Japan, the Imperial Family, and for Buddhism."

"Prince Shotoku was an ardent Buddhist and is traditionally attributed the authorship of the Sangyō Gisho, or "Annotated Commentaries on the Three Sutras" (Lotus Sutra, the Vimalakirti Sutra, and the Sutra of Queen Srimala). The first of these commentaries, Hokke Gisho, is traditionally dated 615 C. E., and thus regarded as "the first Japanese text", in turn making Shōtoku the first Japanese writer.....the Prince respected Shintoism and never visited Buddhist temples without visiting Shinto shrines."

"Buddhism is considered to have been officially introduced to Japan in A.D. 538 when the ruler of Baekje, a Korean kingdom, presented a brilliant image of the Buddha along with scripture-scrolls and ornaments to the Japanese Emperor Kimmei. In those days, Emperor Kimmei ruled Japan with his court nobles and immediately controversy started over whether or not such a foreign cult should be accepted. The orthodox Mononobe and Nakatomi clans strongly opposed this new religion on the grounds that Japan already had its traditional and indigenous religion of Shinto. But the influential Soga clan favored Buddhism; they believed that it had much to offer for the enrichment of their culture. Thus in the end, despite the disputes that took place among the court nobles, the emperor deferred the matter to the Soga clan....About 40 years later, the pious Prince Regent Shotoku (A.D. 574–621) was appointed regent to the Empress Suiko, at which time he declared Buddhism as the official religion. Prince Shotoku was a great statesman and a devout Buddhist. He strongly believed that only with Buddhist teachings could he make Japan a unified and culturally refined country.....In order to carry out his plans, Prince Shotoku issued the 17–Article Constitution in 604, which emphasized Buddhist and Confucian principles. Article II of this injunction reads, “Fervently respect the Three Treasures.” Prince Shotoku stressed that everyone should faithfully revere the Three Treasures (the Buddha, Dharma, and Sangha) as the supreme and unmistakable guidance.....He also ordered the government to build many Buddhist temples among which the most famous is Horyu-ji temple, the world’s oldest wooden structure now standing near the former capital of Nara. It was because of his patronage and devotion that Buddhism was firmly established on Japanese soil.".....http://www.buddhanet.net/nippon/nippon_partI.html

"Emperor Kimmei (欽明天皇 Kinmei-tennō?, 509–571) was the 29th emperor of Japan, according to the traditional order of succession.....

"Zen Buddhism was not introduced as a separate school in Japan until the 12th century during the Kamakura period. (1185–1333)....Buddhism was introduced to China in the first century AD. According to tradition Chán was introduced around 500 AD by Bodhidharma, a 'Blue Eyed Persian' monk teaching dhyana. He was the 28th Indian patriarch of Zen, and the first Chinese patriarch."

"Shinto and Buddhism Separation Order of 1886.....The Japanese term shinbutsu bunri (神仏分離?) indicates the separation of Shinto from Buddhism, introduced after the Meiji Restoration, and therefore the separation of kami (native Shinto deities) from buddhas (buddhist deities), and of Buddhist temples from Shinto shrines (jinja).....Until the end of the Edo period, in 1868, Shinto and Buddhism were intimately connected in what was called shinbutsu shūgō (神仏習合), to the point that the same buildings were often used as both Shinto shrines and Buddhist temples, and Shinto gods were interpreted as manifestations of Buddhas..... with the Kami and Buddhas Separation Order (神仏判然令 Shinbutsu Hanzenrei?) of 1868. This order triggered the haibutsu kishaku, a violent anti-Buddhist movement that caused the forcible closure of thousands of temples, the confiscation of their land, the forced return of many monks to lay life or their transformation into Shinto priests, and the destruction of numerous books, statues and other Buddhist artefacts."....Stone, Jacqueline (December 1993). "Review of Of Heretics and Martyrs in Meiji Japan: Buddhism and Its Persecution by James Edward Ketelaar". Harvard Journal of Asiatic Studies 53 (2): 582–598.

"Shambhala Buddhists have adopted the practices of kyūdō, ikebana (kado), tea ceremony, oryoki, calligraphy, and other traditional Japanese arts as a means of extending the mind of calm-abiding and awareness to more active practices......To a lesser extent, Trungpa Rinpoche incorporated other elements into Shambhala tradition that he thought would be beneficial to practitioners. From the Bön religion, the lhasang ceremony is performed; other elements of shamanism play a role. From Confucianism comes a framework of heaven, earth, and man for understanding the proper relationship between different elements of compositions of all kinds. From Taoism comes the use of feng shui and other incorporations. From the Shinto tradition comes the use of kami shrines to honor natural forces in specific locales...."

"Trungpa Rinpoche incorporated elements from numerous traditions into the Shambhala Path that he thought would be beneficial to practitioners. Similar elements in the Bön religion, Shenlha Okar, Nine Brothers Who Created Existence, Werma, Dralha and Lhasang are of interest. From Confucianism comes a framework of heaven, earth, and man for understanding the proper relationship between different elements of compositions of all kinds. From Taoism comes the use of feng shui and other incorporations. From the Shinto tradition comes the Sun Goddess and the Sacred Mirror, the Kami shrine at RMSC. From the Manichaeans, the vegetarian diet is of interest...Trungpa talked about Mithra. Was curious about Native American wisdom. Jack Niland, an early student of Chögyam Trungpa, relates the tale of Chögyam Trungpa and the I Ching - that he “used the I Ching for everything...there are hexagrams everywhere if you can see them.”.....As Chögyam Trungpa says in Great Eastern Sun, The Wisdom of Shambhala, p 133: "Shambhala vision applies to people of any faith, not just people who believe in Buddhism… the Shambhala vision does not distinguish a Buddhist from a Catholic, a Protestant, a Jew, a Moslem, a Hindu. That’s why we call it the Shambhala kingdom. A kingdom should have lots of spiritual disciplines in it. That’s why we are here."

"Shibata Sensei was the master of Taiyusha Kyudojo practice hall in Kyoto (founded in 1883) until its closure in 1991. In addition to making bows for warriors and nobility, the Shibatas also made hama-yumi (sacred bows) used in Shinto and Buddhist rituals. They were also heads of Kyoto Bowmaker’s Guild for many generations. During the Meiji Restoration, the Shibata lineage was appointed the Bowmaker to the Emperor of Japan, whose most important duty is producing the Goshimpo-yumi which are enshrined at the Grand Imperial Shrine at Ise and replaced every twenty years....In 1980 Shibata Sensei came to the United States to teach kyudo to the Shambhala community, at the invitation of Vidyadhara the Venerable Chogyam Trungpa Rinpoche. Together they founded Ryuko Kyudojo (Dragon-Tiger Kyudo Practice Hall) in Boulder, where he established permanent residence in 1985." 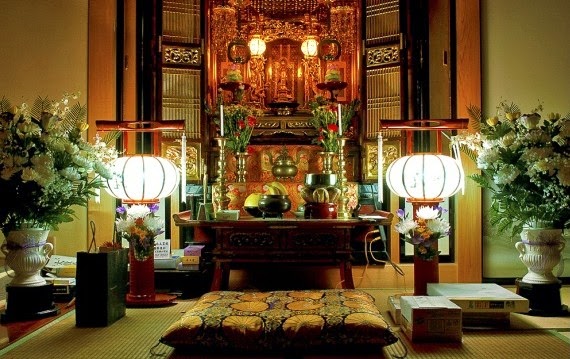 "This is a butsudan altar where the Japanese place their prepared offerings and pray for their ancestors....A butsudan (佛壇 or 仏壇, literally "Buddhist altar") is a shrine commonly found in temples and homes in Japanese Buddhist cultures. A butsudan is a wooden cabinet with doors that enclose and protect a gohonzon or religious icon, typically a statue or painting of a Buddha or Bodhisattva, or a "script" mandala scroll. The doors are opened to display the icon during religious observances, and closed before sunset. A butsudan usually contains an array of subsidiary religious items, called butsugu, such as candlesticks, incense burners, bells, and platforms for placing offerings such as fruit, tea or rice. Some Buddhist sects place ihai, memorial tablets for deceased relatives, within or near the butsudan."....https://exploringanotherworld.wordpress.com/japanese-customs-and-traditions/

"Shambhala Buddhism....In 2000 that Sakyong Mipham Rinpoche first announced that Buddhism (according to the Kagyü and Nyingma traditions taught by Chögyam Trungpa Rinpoche) and the Shambhala teachings of Chögyam Trungpa were no longer separate or distinct, but were “inseparable.” Trungpa Rinpoche also spoke of the Buddhist and Shambhala teachings as inseparable, but he also said that Shambhala had its own independent basis. By creating what is now called “Shambhala Buddhism,” the Sakyong has undermined that independent basis......The Sakyong’s underlying purpose of bringing together Buddhism and Shambhala is to create a “unified path.....Shambhala was something that anybody could learn and practice. Trungpa Rinpoche said that very specifically. You could be a Christian or a Jew or a Muslim. Or you could be an atheist. So it was secular and it did not lead to Buddhism.... Christian Shambhalians were quite committed. (I am using the past tense, because I think they have “dropped out.”) They were considered sangha – by themselves as well as by the Buddhist sangha. Some of them were quite distressed when the Shambhala teachings became “Shambhala Buddhism......".... An Interview with Acharya Adam Lobel....June 16, 2009 by Barbara Blouin .... http://radiofreeshambhala.org/2009/06/new-curriculum/