"By 669 AD the Western Turks were undergoing considerable political turmoil and Tri Du-srong, the emperor of Tibet, was actively extending his power in Central Asia by means of continuous bloody warfare and pillage. The neighboring Turkish Shahi kingdoms of Kapisa (Shambhala) and Uddiyana were also both being hard pressed on their southwesterly flank by the inexorable expansion of the southern Arab Moslems.".....http://www.dharmafellowship.org/biographies/historicalsaints/pramodavajra.htm

"Based on the account of the Chinese pilgrim Hiuen Tsang (Xuanzang), ( journey from 629 to 645 AD), who visited in AD 644, it seems that in later times Kapisa was part of a kingdom ruled by a Buddhist kshatriya king (Warrior King) holding sway over ten neighboring states, including Lampaka, Nagarahara, Gandhara, and Banu. Hiuen Tsang notes the Shen breed of horses from the area, and also notes the production of many types of cereals and fruits, as well as a scented root called Yu-kin."

"The earliest references to Kapisa appear in the writings of fifth century BCE Indian scholar Pāṇini. Pāṇini refers to the city of Kapiśi, a city of the Kapisa kingdom, modern Bagram. Pāṇini also refers to Kapiśayana, a famous wine from Kapisa. The city of Kapiśi also appeared as Kaviśiye on Graeco-Indian coins of Apollodotus I and Eucratides."

"According to the scholar Pliny, the city of Kapiśi (also referred to as Kaphusa by Pliny's copyist Solinus and Kapisene by other classical chroniclers) was destroyed in the sixth century BCE by the Achaemenid emperor Cyrus (Kurush) (559-530 BC). 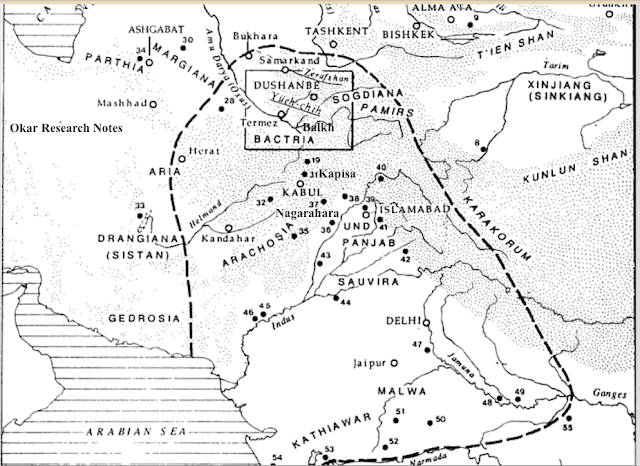 "Xuanzang.....His first important stop was in Bactria, part of modern Afghanistan. Balkh was a city of prodigious antiquity which Alexander the Great chose for his home base from 329 to 327 CE. The successors of Alexander and the Kushan kings who succeeded them contributed to the distinctive art which we call Gandharan. Xuanzang stayed a month at the New Monastery there, one of the finest in the Buddhist world, where he admired its relics. After Balkh, he struggled through the treacherous Hindu Kush mountains to reach the valley of Bamiyan. It was a station of primary importance on the road from Central Asia to India. The pilgrim visited the colossal Gandharan statues carved in the cliff face....'On a declivity of a hill to the northeast of the capital was a standing image of the Buddha made out of stone 140 or 150 feet high, of a brilliant golden color and resplendent with ornamentation of precious substances.'......it was deliberately destroyed in March 2000 by the Taliban....From this important center of Buddhism, Xuanzang and his caravan made their way through the Black Mountains to the plain of Kapisa, whose capital Kapisi, is 40 miles north of Kabul. This was the first capital of the Kushan empire established in the first century C.E. Kanishka I,(BCE 78-225 CE?) its most famous king, ruled over much of present-day Pakistan, Afghanistan, Tajikistan and part of Central Asia. He was a great supporter of Buddhism and especially of Gandharan sculpture, that hybrid of Buddhism and Graeco/Roman art. which produced classical figures of calm and serene Buddhas.....Xuanzang met Jain and Hindu ascetics for the first time on this part of his journey. He contrasts the mountain-dwelling Afghans with their harsh uncultivated ways, wearing fur garments and coarse wool, to the Hindus who were slight, active and impetuous in comparison, and whose garments were made of white linen or cotton for the most part. A modern view marks British India as beginning at the eastern side of the Khyber Pass, but Xuanzang considered he had entered India at Jalalabad, his next important resting place......When Xuanzang finally reached the area near Jalalabad in Pakistan, he felt as Alexander the Great did 9 centuries earlier, that he had entered a new world. He stops his travel narrative to devote a long chapter to a consideration of the land of India. He says:...'India was above 90,000 li in circuit, with the Snowy Mountains (The Hindu Kush) in the north and the sea on its three other sides...'......http://www.mongolianculture.com/indomongolian.htm#_edn8 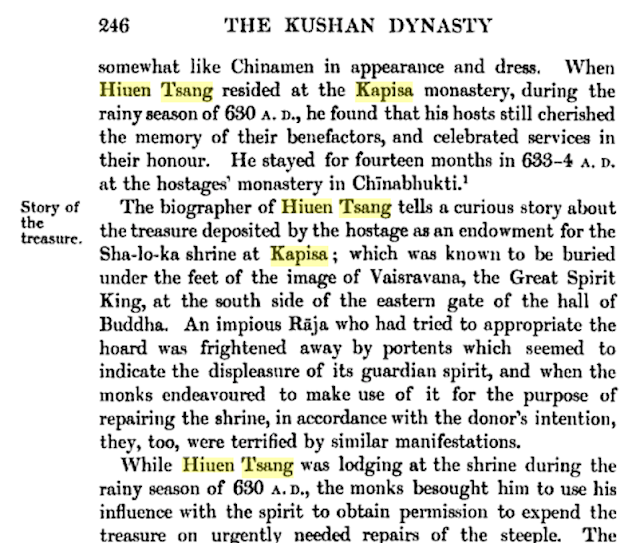 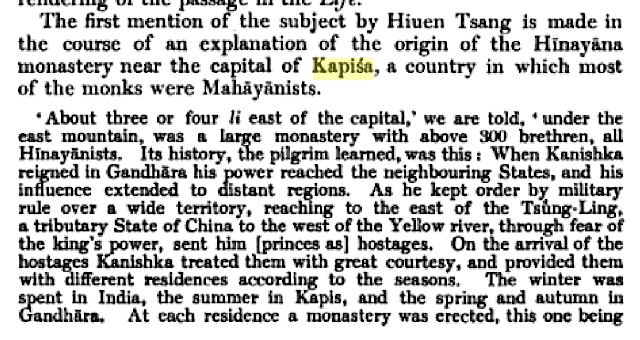 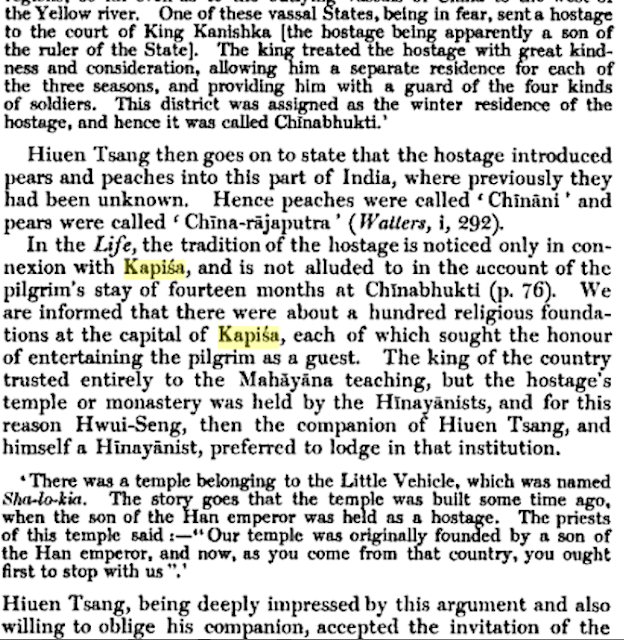 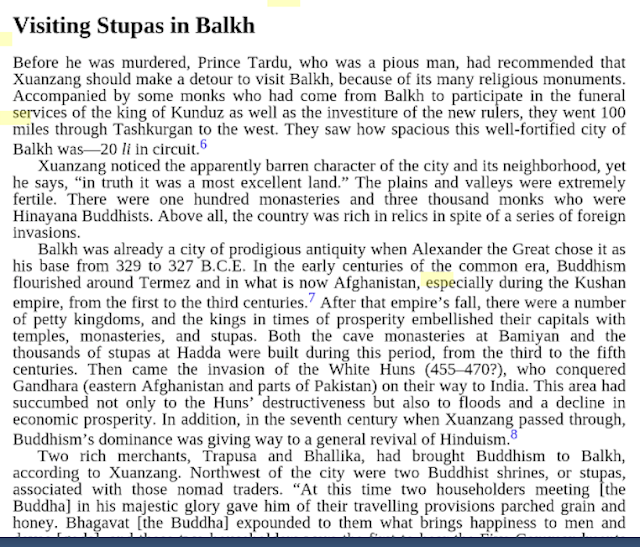 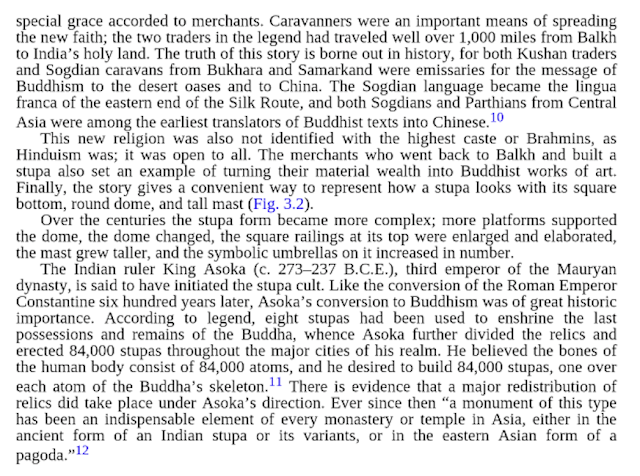