"From the seventh century A.D. onwards many popular religious elements of heterogeneous nature were incorporated into Mahayana Buddhism which finally resulted in the origin of Vajrayana, Kalachakrayana and Sahajayana Tantric Buddhism. Tantric Buddhism first developed in Uddiyana, a country which was divided into two kingdoms Sambhala and Lankapuri. Sambhala has been identified with Sambalpur and Lankapuri with Subarnapura (Sonepur).....Sambalpur District is a district in the western part of state of Odisha, India.."..... Buddhist Remains in Western Odisha by Dr. Byomakesh Tripathy

"The historicity of Tapassu and Bhallika of Orissa/Utkala who became the first disciples of Lord Buddha, are shrouded in mystery. Utkal was a very ancient country. In Buddhist literature it is described as 'Ukkala' or 'Okkala'. In the Brahminical literature we find copious depiction of Utkala, said to have been located in the southern region of extended Vindyan range along with Mekalas, Kalingas, Andhras and others. Most scholars are of the opinion that Utkala of the epics and Puranas is the same as 'Ukkala' or 'Okkala' of the Pali literature.".....The First Disciples of Lord Buddha.....BY: G.N. MOHANTY, etc

"Buddhism has played very important role in shaping the history and culture of Afghanistan. It continued to be a Buddhist country for more than nineteen centuries and thereafter for many reasons the pristine culture and original religion of Afghanistan were completely wiped out from there.....We know the story of Tapassu and Bhalluka. They are said to have been touring merchants and met the Buddha under the Rajayatana tree at Bodha-Gaya while coming from Ukkala (Orissa) in the eighth week after his Enlightenment. They took refuge in the Buddha and the Dhamma and thus became the first lay-devotees or Upasakas of the Buddha......It is now proven that their homeland was located somewhere near Balkh, the ancient Bahlika at the far end of the north-western Afghanistan. It has also been suggested that the name Bhalluka is a derivative from the town Bahalika......In all probability it appears that Tapassu and Bhalluka were the merchants from Balkh area and they were the first persons who took the message of the Buddha to Afghanistan. Bhalluka later became a monk and built a monastery near his home city. He brought with him eight hairs of the Buddha as relics, for which he built a stupa monument......The area across the Khyber Pass, which was called Udyana in ancient days is a part of Afghanistan in the Province of Ningarahar with its capital Jelalabad. It was a part of Gandhara in ancient times."....Ven. Ajahn Brahmavamso (Abbot of Bodhinyana Monastry in Western Australia) at Maharagama Vajiraghnana Dharmayathanaya on Sunday 13th February 2005.

".....eight hundred years after Kulika Pundarika, a Moslem invasion weakened the Kingdom (of Shambhala), this being in 624 A.D. Nevertheless, the lineage of Kulika Kings continued such that the Indian master Chilupa from Orissa travelled to Shambhala and become an expert in the tantra and in Kulika Pundarika’s Great Commentary. He returned to India in 966 A.D., and disseminated the teaching, bringing it to prominence there."..... History of the Kalachakra Tantra.....http://www.namgyalmonastery.org

"Ancient Dhanyakataka Stupa at Amaravati, Guntur district, India....This is the oldest of all Kalachakra Stupas and the place where according to Vajrayana oral transmission the Kalachakra tantra was first revealed by the historical Buddha." 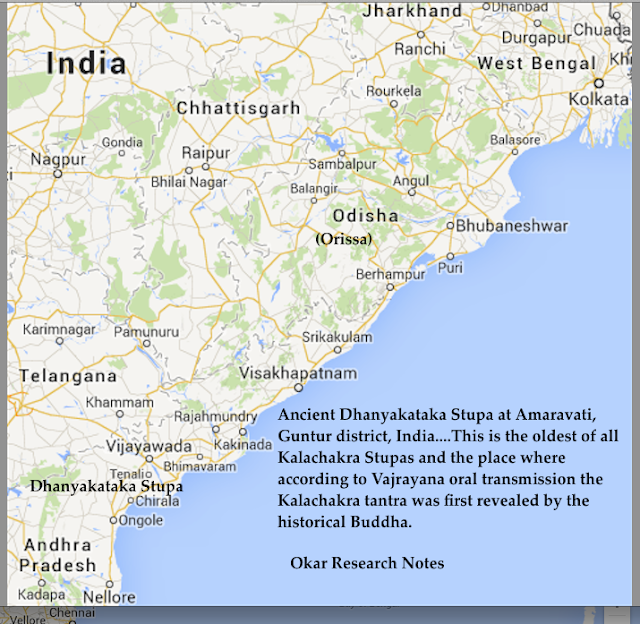 "Odisha (formerly known as Orissa.....is an Indian state on the subcontinent's east coast, by the Bay of Bengal.....Dalai Lama would visit the Tibetan settlement at Chandragiri in Gajapati district of south Orissa in January.....Orissa is slowly emerging as a destination of the Buddhist tourists. He also agreed that the Buddhist tourism sector in Orissa needed more publicity. He requested the Lama to help in finding a process to publicise this tourism....."