"Thus it has been said when Shakyamuni Buddha was in Grdhrakuta mountain, he twirled a flower in his finger and held it before his congregation. Everyone was silent. Only Maha Kashapa wholeheartedly smiled. Buddha said, 'I have the eye of the true teaching, the heart of Nirvana, the formless form, the mysterious gate of Dharma. Beyond the words and beyond all teachings to be transmitted, I now pass this on to Maha Kashapa.'".....http://sped2work.tripod.com/vulturespeak.html 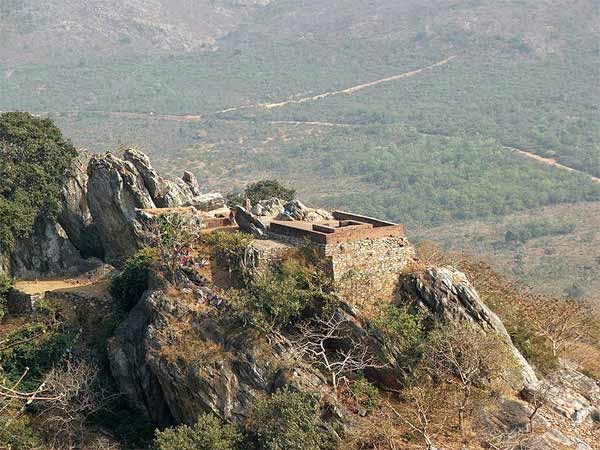 "One of the most important of all associations with a "place" in the life and teachings of the Buddha, other than the Bodhi Tree and Deer Park, is with Vulture Peak, a small mountain just outside the city of the ancient city of Rajgir, India. Here, sixteen years after his Enlightenment, he set forth the second turning of the wheel of Dharma to an assembly of 5,000 monks, nuns and laity, as well as innumerable bodhisattvas. This collection of teachings, which extended over twelve years, includes the Saddharmapundarika Sutra and the Surangama Samadhi Sutra, as well as many Prajna-paramita Sutras, which, as the Buddha himself told Ananda, contain the very essence of all his teachings".........http://sped2work.tripod.com/vulturespeak.html

"Griddhraj Parvat (also called, Gridhra-kuta Hill or locally known as Giddhaila Pahar) (English: Vulture Peak, Hindi: गृद्घराज पर्वत), which literally means the hill of vultures, is a hill of religious, archeological and ecological importance situated in Devrajnagar village of tehsil Ramnagar in Satna district of Madhya Pradesh, India. It is located at a distance of 8 km from Ramnagar town and 65 km from Satna in south direction. Its latitude and longitude are 24°18' North and 81°15' East. The altitude of the hill is 2354 feet. The hill is situated between Kaimur Range in the north and Maikal hills in the south. The place is of archeological importance. There are four caves on the hill in which Rock painting and mural paintings are visible......http://en.wikipedia.org/wiki/Griddhraj_Parvat 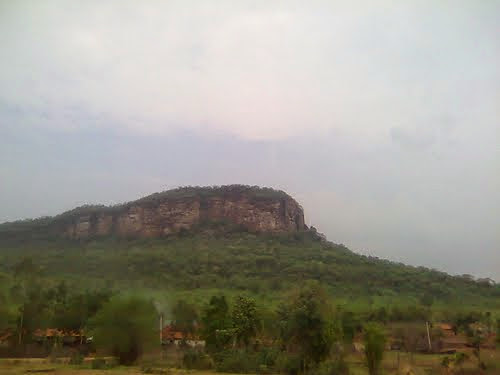 "The Chinese Buddhist pilgrim, Fa-hien, probably visited a different Buddhist holy place with the same name (possibly Vulture Peak in Rajgir). He notes visiting Gridhra-kuta Hill in Chapter XXIX of his travelogue, A Record of Buddhist Kingdoms:......"Entering the valley, and keeping along the mountains on the south-east, after ascending fifteen le, (the travellers) came to mount Gridhra-kuta. Three le before you reach the top, there is a cavern in the rocks, facing the south, in which Buddha sat in meditation. Thirty paces to the north-west there is another, where Ananda was sitting in meditation, when the deva Mara Pisuna, having assumed the form of a large vulture, took his place in front of the cavern, and frightened the disciple. Then Buddha, by his mysterious, supernatural power, made a cleft in the rock, introduced his hand, and stroked Ananda's shoulder, so that his fear immediately died. The footprints of the bird and the cleft for (Buddha's) hand are still there, and hence comes the name of "The Hill of the Vulture Cavern."......http://en.wikipedia.org/wiki/Griddhraj_Parvat 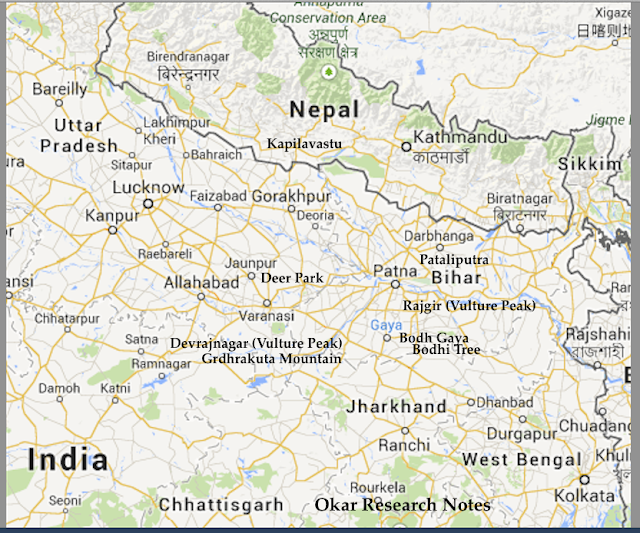 In Hindu mythology....."Griddhraj Parvat is of great religious importance in Hindu mythology. It has been mentioned in Skanda Purana as ‘Griddhanchal Parvat’. It is believed to be the birthplace of ‘Sampati’, the brother of Griddhraj ‘Jatayu’ mentioned in Ramayana." .....http://en.wikipedia.org/wiki/Griddhraj_Parvat

"The Gijjhakuta, the Vulture Peak, was the Buddha’s favorite retreat in Rajagaha and the scene for many of his discourses. According to the commentaries this place got its name because vultures used to perch on some of the peak’s rocks.......The several rock shelters around the Gijjhakuta, its fine view across the valley, and its peaceful environment made it the perfect place for meditation. Climbing the steps that lead to the top, the pilgrim passes a large cave. This is the Sukarakhata (the Boar’s Grotto) where the Buddha delivered two discourses, the Discourse to Long Nails and the Sukarakhata Sutta. It was here too that Sariputta attained enlightenment. The Sukarakhata seems to have been formed by excavating the earth from under the huge rock that forms the grotto's roof, an impression confirmed by legend. According to the Pali commentaries during the time of Kassapa Buddha a boar rooting around under the rock made a small cavity which was later enlarged when monsoon rains washed more earth away. Later, an ascetic discovered the cave and, deciding it would be a good place to live in, built a wall around it, furnished it with a couch, and ‘made it as clean as a golden bowl polished with sand.’....http://dhammawiki.com/index.php?title=Vulture_Peak

"First Turning of the Wheel of Dharma......The First Turning of the Wheel was at Sarnath, in the king's deer park. This was Shakyamuni Buddha's Discourse on the Four Noble Truths ("the truth of suffering ...") that he gave particularly to the five companions with whom he had been practicing various austerities. It forms the motivation or basis for all Buddhists."......http://www.khandro.net

"Second Turning of the Wheel of Dharma......The Second Turning of the Wheel took place at Vulture Peak outside Gaya and includes the discourse on compassion and Emptiness. It is exemplified by the Prajnaparamita literature -- a condensed form is the Heart (Skt : hridya) Sutra: "Form is Emptiness; Emptiness [is] Form." All Mahayana Buddhists have this teaching as the basis for their consideration of other beings.".........http://www.khandro.net

"Third Turning of the Wheel of Dharma......The third turning was also delivered to an audience of bodhisattvas in Shravasti and other Indian locations (e.g. in Kusinagara, to Bodhisattvas and onlooking Buddhas, in the Mahaparinirvana Sutra) – or even in transcendental Buddhic realms (in the Avatamsaka Sutra).".....The Third Turning of the Wheel was at Vaishali and some other places. It comprises the elucidation of "Emptiness" and its relation to Buddha Nature. The Mahaparanirvana Sutra and such Mahayana commentaries as the Uttaratantra Shastra address this. Not all Mahayana Buddhists have the same view of these texts.".........http://www.khandro.net

"Fourth Turning of the Wheel of Dharma........Tantric Buddhism traces its origins to Buddha Sakyamuni's fourth "Turning of the Wheel," which is believed to have occurred at the stupa of Sri Dhanakosha near Amravali in Andhra Pradesh, India, in the year of His Enlightenment. All the high tantras such as Chakrasamvara, Guhyasamaya, and Kalachakra, derive from this. "..........http://www.khandro.net

"According to Alexander Berzin, the system as taught by the Dalai Lama has three sources:.....First, Buddha Shakyamuni taught it to an Indian audience that included Suchandra, the King of Shambhala. He, with his entourage of 96 others, flew home to set down what they had heard in The Root Kalachakra Tantra.....

"According to tradition, while the Buddha was in his physical body here at Vulture’s Peak delivering the Prajnaparamita an emanation of the Buddha appeared at the same time in south India, at a place called the Dhanyakataka Stupa, and taught the Kalachakra, or Wheel of Time, doctrine to Suchandra, the King of Shambhala, who had traveling to India from his kingdom somewhere in the north specifically to receive these teachings.:......http://www.doncroner.com/2005/12/india-rajgir-vultures-peak-kalachakra.html 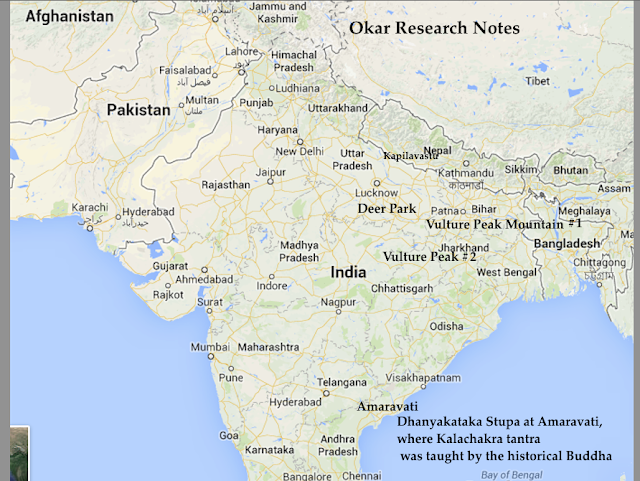 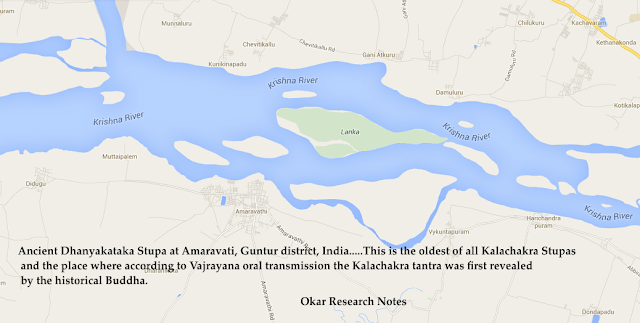 Ancient Dhanyakataka Stupa at Amaravati, Guntur district, India.....This is the oldest of all Kalachakra Stupas and the place where according to Vajrayana oral transmission the Kalachakra tantra was first revealed by the historical Buddha. 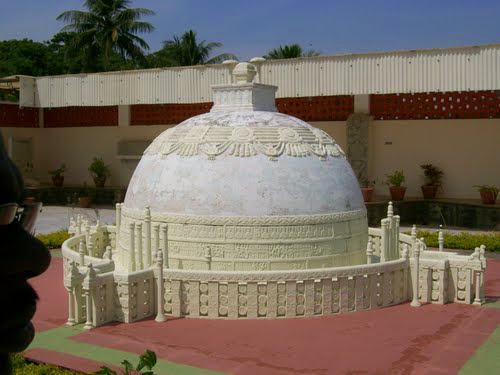