Mount Mandara & The Ocean of Milk

"Mandara (Sanskrit: मंदार) is the name of a mountain which appears in the Samudra Manthan episode in the Hindu Puranas, where it was used as a churning rod to churn the ocean of milk....The story appears in the Bhagavata Purana, the Mahabharata and the Vishnu Purana. In literal terms, this tale is an allegorical description of what transpires during a kundalini awakening process. Kundalini is a latent energy that lays dormant in the spine. Upon awakening, it rises in a sensation akin to a slithering snake, up the spinal column (Meru-danda, represented by Mount Meru in the story)....." 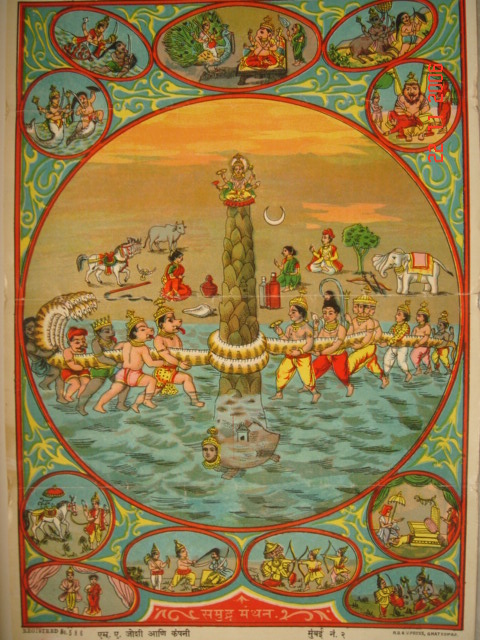 "The churning of the Ocean of Milk was an elaborate process. Mount Mandara was used as the churning rod, and Vasuki, the king of serpents, who abides on Shiva's neck, became the churning rope. The demons demanded to hold the head of the snake, while the gods taking advice from Vishnu, agreed to hold its tail. As a result the demons were poisoned by fumes emitted by Vasuki. Despite this, the gods and demons pulled back and forth on the snake's body alternately, causing the mountain to rotate, which in turn churned the ocean. However, once the mountain was placed on the ocean, it began to sink. Vishnu, in the form of a turtle Kurma, came to their rescue and supported the mountain on his back."....http://mesosyn.com/myth2h-1.html

Mount Mandara...."The mountain round which the gods. Coiled the World Serpent to cause. The Churning of the Ocean. This is also said to be the home of the Shi Tenno, Japanese deities guarding the cardinal points. At times, identified as Mount Mandara, Mandara, Mandara, Cambodian Prah Sumer, Cambodian Prah Sumer, Chinese K'un Lun or Chinese K'un Lun."...http://www.mythologydictionary.com/mount-mandara-mythology.html

"Kshir Sagar.....In Hindu cosmology, the Ocean of milk (kṣīroda, kṣīrābdhi or Kṣīra Sāgara) mythologically denotes milky way as the fifth from the center of the seven oceans that surround loka or directional space and separate it from aloka or non-directional space. It surrounds the continent known as Krauncha.... In Hinduism, the devas (gods) and asuras (demons) worked together for a millennium to churn the ocean and release Amrita the nectar of immortal life.... It is spoken of in the Samudra manthan chapter of the Puranas, a body of ancient Sanskrit legends. It is also the place where Vishnu reclines over Shesha Naga, along with his consort Lakshmi."....https://en.wikipedia.org/wiki/Kshir_Sagar 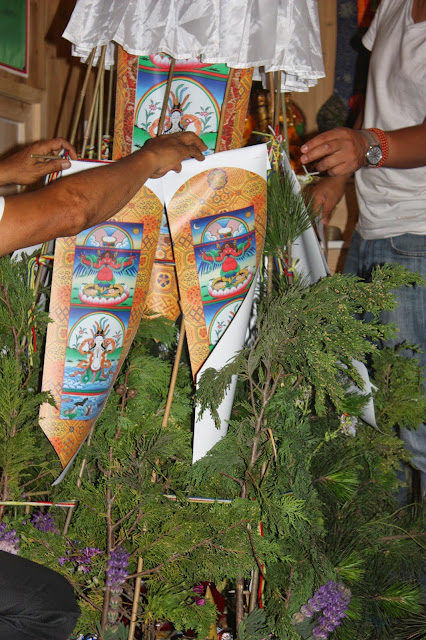 "The Tibetan Bon ritual called “Offering the Ocean of Milk to the Lu (Naga) Spirits for Healing and Prosperity”.......http://www.olmoling.org/events/lu_chod_homi_gyatso_ritual_retreat

"On the four sides of the great Mount Meru are four mountains--Mandara, Meru.mandara, Suparsva, and Kumuda--which are like its belts.....Rig Veda 3.23.4 also states that east of Sumeru (Mt. Meru...Tibetan: Ri Rab) is the ocean of milk, in which there is a white city on a white island where the Lord Shiva can be seen sitting with his consort Parvati.....Kailash is a rather small member of the Himalayas. The name of this stupendous range stems from Himavat, the father of Lord Shiva’s bride, Parvati."

"The Vedas mentioned Mount Kailash as cosmic axis and world pillar, center of the world, and world tree. It has other names…Meru, Sumeru, Sushumna, Hemadri, Deva Parvata, Gana Parvata, Rajatadri, and Ratnasanu. Kang Tisé or Kang Rinpoche (the ‘Precious Jewel of Snow’ in Tibetan), Meru (or Sumeru), Swastika Mountain, Mt. Astapada, Mt. Kangrinboge (the Chinese name) – all these names, real or legendary, belong to one of the holiest and most mysterious mountains in the world – Mount Kailash. In religion or mythology, the world center or the connection is between Heaven and Earth. As the celestial pole and geographic pole, it expresses a point of connection between sky and earth where the four compass directions meet."....https://sivkishen.wordpress.com/2014/09/02/hidden-mystery-of-kingdom-of-shiva/

"In Indian mythology, Mount Mandara is the cosmic pivot about which the serpent was twisted in order to churn the Sea of Milk at the beginning of Time. By alternately tugging at either end of the coil, Gods and Ashuras working together managed to extract amrita -- the Nectar of Immortality. The process also gave rise to butter, the sun horse, and the wishing-fulfilling tree.....This pivot that is the mountain is believed to be at the very centre of the celestial arrangement -- it marks the spot about which the equinoxes precess. In other words, the Sea of Milk is the Milky Way, and every 20,000 years or so, the path of the entire solar system wobbles as does the handle of a top. The point or very tip, that is, the spot about which the entire cosmos spins is Mount Meru....In Tibetan, Kailas is called Kang Rinpoche, or the Precious Mountain. The Bön call it Yung-drung Gu-tzeg "9-storey swastika" because on the south face of Kailash can be seen a swastika [Skt: 'self-manifested mark'] which, until the 20th century, was purely a universal symbol of prosperity, auspiciousness, and rebirth....This peak is also viewed as the earthly manifestation of Mount Sumeru or Meru, as it is also known. Sumeru is considered the actual focus -- the absolute central point -- of the mandala that is the universe. Some scholars think that the name Sumeru is a reference to the ancient kingdom of Sumer ..... ."....http://www.khandro.net/nature_mountain.htm

"Cooperation between the asuras and devas is not relegated to the earlier Hindu scriptures, the Rig Veda. Stories of their cooperation can be found in the later Puranas, such as the story of Mount Mandara. However, their cooperation is short-lived. In the story, a catastrophic flood befalls the earth submerging the treasured possessions of the devas and asuras including the elixir of immortality, Amrita (cf. Avestan Amertat, immortality). The peak of the lofty Mount Meru rose above the flood and this is where the gods gathered and caucused on how to retrieve the Amrita. They agreed to a plan proposed by the deva Vishnu. Together, they uprooted the mountain Mandara and placed it on the back of Kurma, the tortoise. The gods then coiled the world serpent Vasuki around the mountain like a rope with the asuras holding one end of the snake and the devas the other end. By coordinating their actions, they used the snake coiled around the mountain to rotate the mountain and thereby churn the cosmic ocean formed by the flood. As the waters churned, the ocean turned to milk and then to butter, revealing the lost elixir of immortality and other treasures. The cooperation soon ended. According to the Bhagavata-Purana, as soon as the Amrita was produced, the devas took possession of it, and broke their promise to the asuras to give them half. As a consequence, the asuras then tried to steal it from the devas. A struggle ensued which the asuras lost and the devas consumed the nectar of immortality all by themselves."....http://www.heritageinstitute.com/zoroastrianism/aryans/religion2.htm

"The Samudra Manthan process released a number of things from the Milk Ocean. One product was the lethal poison known as Halahal. (In some versions of the story, this poison escaped from the mouth of the serpent king as the demons and gods churned.) This terrified the gods and demons because the poison was so powerful that it can destroy all of creation. Then the gods approached Shiva for protection. Shiva consumed the poison in an act to protect the universe, and his wife Parvati pressed her hand on Shiva's throat to save the universe. As a result, The color of Shiva's neck turned blue. For this reason, Lord Shiva is also called Neelakanta (the blue-throated one; "neela" = "blue", "kantha" = "throat" in Sanskrit)."....http://mesosyn.com/myth2h-1.html 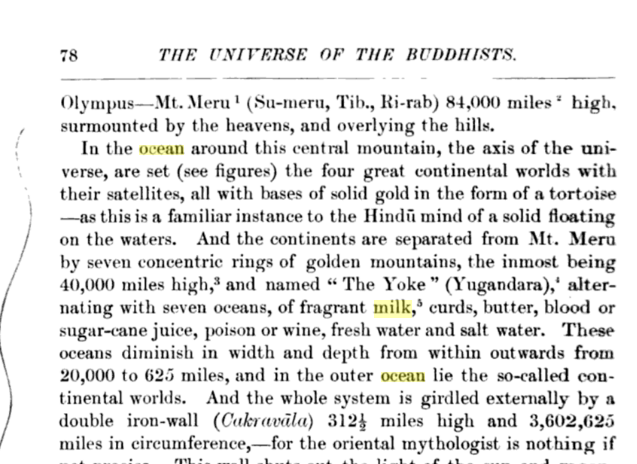 The Buddhism of Tibet: Or Lamaism, with Its Mystic Cults, Symbolism and ...By Laurence Austine Waddell 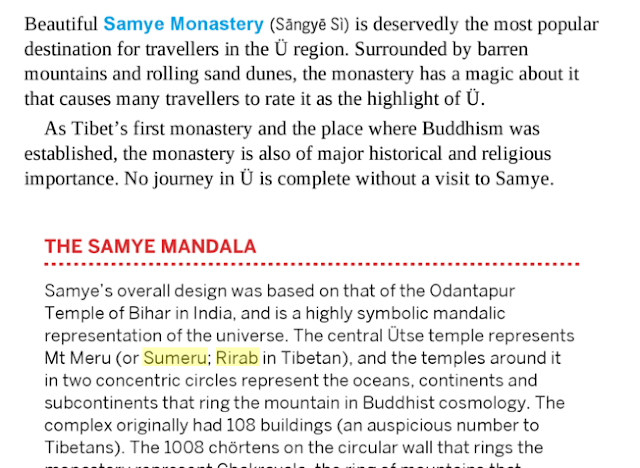