"Otzi, the frozen Copper Age mummy who was discovered in 1991 in the Otzal Alps: He suffered from parasitic worms, Lyme disease, tooth decay, joint problems, and other ailments. He died in his mid-40s, likely sometime between 3239 and 3105 BC....and likely from a blow to the head. He has at least 19 living relatives somewhere in Austria. His nickname, the Iceman, is a perfectly badass moniker for someone who wore leather leggings and had 60-plus tattoos.....a microbe taken from his gut reveals new information about human migration patterns during and after Otzi’s lifetime.....The bacterium, Helicobacter pylori, is found in roughly half of all people alive today. It’s been infecting humans for an estimated 100,000 years.....The modern European strain is thought to be a hybrid of two older Asian and African strains. But when the authors of the Science paper reconstructed the genome of Otzi’s microbe, they found it to be nearly identical to the Asian variety—meaning it shared less ancestry with the African strain than the bug carried by modern Europeans......the authors offer one possibility: that a mass migration from Africa to Europe took place sometime in the millennia between Otzi’s death and the present day.......He carried a more pure strain, an unmixed strain, and we can say that the history of Helicobacter population genetics in Europe is different than previously thought.."....http://www.theatlantic.com/science/archive/2016/01/otzi-the-iceman-gut-bacteria-mass-migration/423069/ 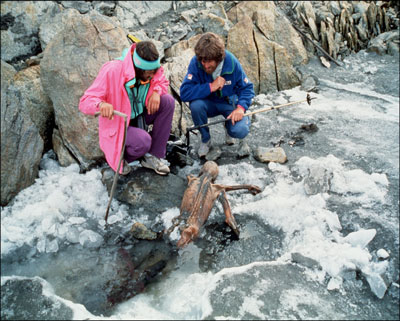 "The mummy was found in September 1991 in the Ötztal Alps, hence the nickname "Ötzi", near the Similaun mountain and Hauslabjoch on the border between Austria and Italy.....On a sunny day two hikers, Erika and Helmut Simon, from Nuremberg in Germany, were walking in the Ötztal Alps. Descending from the Finail peak in the Tisenjoch area, the Simons decided to take a shortcut and left the marked footpath. As they walked past a rocky gully filled with meltwater, they noticed something brown on the gully bed. At first they thought it must be some sort of rubbish, but on closer inspection they realized with horror that they had discovered a human corpse...." 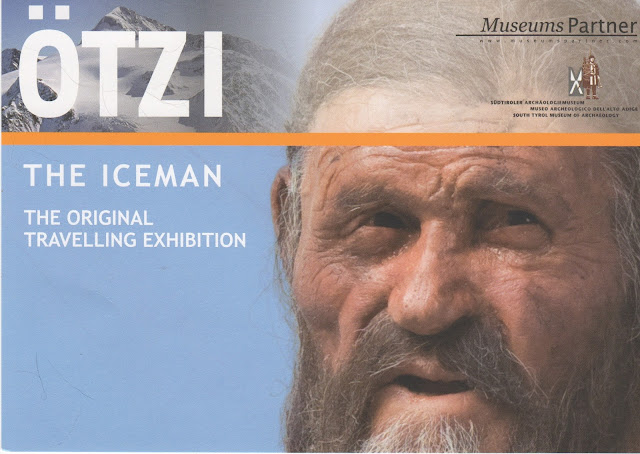 "Scientists believe that the first anatomically modern humans to disperse out of Africa were already carrying H. pylori, and have discovered that different strains can be associated with different human populations. In the far north of India, H. pylori from the stomach of Buddhists is genetically distinct from H. pylori from the stomach of Muslims, one study found. The slave trade, the colonization of Polynesia, and other human migrations spread different variants as well...Otzi’s H. pylori, the researchers write in Science, is a nearly pure Asian strain. Genetically, it is most closely related to an H. pylori strain now found primarily in India. Otzi’s bacterium had almost nothing of the African admixture common in present-day European stomachs......That does not mean Otzi came from India: isotope analysis has shown that he lived his whole life in the Alps. What it does suggest is that the influx of Northeast African H. pylori came to Europe some time after Otzi died.."..http://www.thestar.com/news/world/2016/01/07/5300-year-old-iceman-had-the-stomach-bug-that-causes-ulcers.html

"“Something really dramatic has happened in the last 5,000 years in H. pylori DNA that hasn’t happened in human DNA. There will be an interesting reason for that … we haven’t figured it all out yet,” says Falush....."....http://www.thestar.com/news/world/2016/01/07/5300-year-old-iceman-had-the-stomach-bug-that-causes-ulcers.html

"Otzi the Iceman’s Stomach Sheds Light on Copper-Age Migration to Europe......In the oldest known pathogen study, scientists find the prehistoric hunter had ulcer-causing microbes that exist only in India and South Asia today.....this early European wanderer was infected with a strain that survives today only in India and South Asia, and not those more prevalent in modern Europe. The finding suggests that multiple waves of migrants settled the region, introducing new strains of the bacteria as they intermingled, they said.....

"....anatomically modern humans migrated out of Africa in successive waves starting about 60,000 years ago. It serves as a biomarker for the global travels of humankind.......“The Iceman’s strain must have been the original population that inhabited the stomachs of Europeans 5,000 years ago,” Dr. Moodley said...... the bacteria had inflamed his stomach lining, indicating that the prehistoric hunter, fleeing into the icy highlands where he was shot in the back with an arrow and beaten, may have been feeling ill on the day he was murdered......"....http://www.wsj.com/articles/otzi-the-icemans-stomach-sheds-light-on-stone-age-migration-to-europe-1452193200

"Up till now, it had been assumed that Neolithic humans were already carrying this European strain by the time they stopped their nomadic life and took up agriculture. Research on Otzi, however, demonstrates that this was not the case......"The recombination of the two types of Helicobacter may have only occurred at some point after Otzis era, and this shows that the history of settlements in Europe is much more complex than previously assumed," said Maixner......The findings were published in the Science Magazine. "....http://indiatoday.intoday.in/story/bacteria-found-in-otzi-the-icemans-stomach-study/1/565758.html

"European hunter-gatherers fired their last arrows around 3000 BC......A study of ancient European DNA has found that indigenous hunter-gatherers and immigrant farmers lived together for 2,000 years, before the hunter-gatherer lifestyle finally died out around 5,000 years ago. The study, led by anthropologist Joachim Burger of the University of Mainz, studied bones from the Blätterhöhle Cave near Hagen, Germany, where both hunter-gatherers and farmers were buried...When the glaciers finally retreated and the first farmers began to arrive from the Near East 7,500 years ago....The hunter-gathering lifestyle thus only died out in Central Europe around 5,000 years ago, much later than previously thought......It marked the end of a way of life in Europe practised since the first arrival of their modern human ancestors on the continent 40,000 years before, and which had helped them survive the last Ice Age.."....http://www.abroadintheyard.com/european-hunter-gatherers-fired-their-last-arrows-around-3000-bc/ 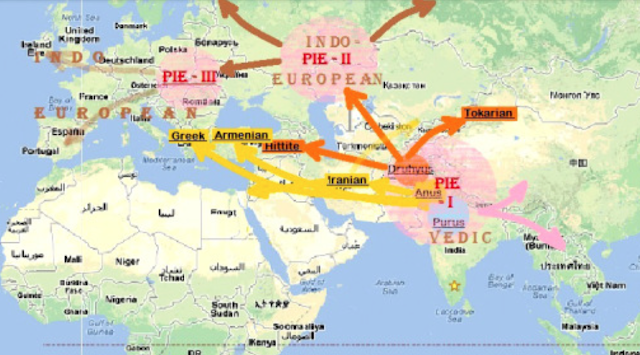 "Indo-Aryan Migration into India, c. 1750 B.C.....This map shows the general route taken by the Indo-Aryans who migrated into India beginning around 1750 B.C. They were nomadic warriors who came from the Plateau of Iran and moved through the Hindu Kush Mountains into the Indus Valley and beyond to the Ganges Valley. With them they brought bronze weapons, horses, and chariots They spoke an Indo-European language called Sanskrit."....https://www.pinterest.com/pin/521502831825304354/