"In 1986 David Reigle published a pamphlet, The Lost Kālacakra Mūla Tantra on the Kings of Śambhala, in which he edited from eight Sanskrit manuscripts a quotation giving the names of the kings of Śambhala. A small book by Reigle was published in 1996, titled Kālacakra Sādhana and Social Responsibility. Drawing on statements by the Dalai Lama, this book says that the Kālacakra practice or sādhana benefits not only the individual practitioner, but society as a whole. In 1998 he and Andy Wistriech co-founded the International Kalachakra Network. This has become a major internet source on Kālacakra. He contributed an essay to As Long as Space Endures: Essays on the Kālacakra Tantra in Honor of H.H. the Dalai Lama, 2009. In 2012 his lengthy review article, The Kālacakra Tantra on the Sādhana and Maṇḍala, was published in Journal of the Royal Asiatic Society.".....https://en.wikipedia.org/wiki/David_Reigle

"The Vimalaprabha (Wyl. dri med 'od), translated as Stainless Light or Immaculate Light, is the main commentary on the Kalachakra tantra. Composed by Pundarika, the 8th king of Shambhala and the second Kalkin king, brought to India in about 967 AD and introduced in Tibet 60 years later in 1027 AD, still existing in Sanskrit, it is the basis for all Kalachakra commentaries....Vimalaprabha (Sanskrit) means 'Stainless Light Commentary', or 'Dri-med ‘od' (in Tibetan), it is a commentary to the Kalachakra tantra, more specifically, the Laghutantra or Abridged Kalachakra Tantra from Shambhala King Manjushri-Yashas. The Vimalaprabha was written by Shambhala King Pundarika."....http://www.rigpawiki.org/index.php?title=Vimalaprabha

"Though the Kālacakra Mūla Tantra is lost, it has been quoted at length in the great Kālacakra commentary entitled Vimalaprabha.....Important in establishing the true Seven and Twenty-Five Sanskrit names of the Kings of Shambhala."..........Kalachakra Research Publications...No.1...Feb 1986

"The seventh King after Sucandra, named Yasas, came to the throne of Sambhala. He prepared a condensation of the Mula Tantra, which he taught to the Brahma-Rishis of Sambhala...It is called the Laghu, or Short Kalachakra Tantra, consisting of about 1000 verses. This teaching unified the four castes of Sambhala into a single Vajra caste...Yasas became known as Kalki, Possessor of the Caste, Rigs-ldan (pronounced Rigden)....his sucessor, Kalki Pundarika wrote a commentary on the Laghu Kalachakra entitled Vimalaprabha."......Kalachakra Research Publications...No.1...Feb 1986

"The International Kalachakra Network is non-sectarian.....The purity of the Kalachakra tradition is very powerfully protected. This protection makes authentic materials hard to access. The most famous example of this is that the Root Tantra is not available in our world - only in Shambhala. Furthermore, experience has shown that of the materials available in our world, many are hard to acquire.....The International Kalachakra Network will only succeed if it respects these powerful protective forces and takes great care to ensure that materials it develops for practitioners are not made available to a wider audience.".....http://kalachakranet.org/ikn_kpg_index.html

"David Reigle ...began his Sanskrit studies at the University of California, Santa Barbara, in 1978, he did not pursue a PhD, but rather continued his Sanskrit studies independently. He began his Tibetan studies with a private tutor in Dharamsala, India, in 1979. While working on Sanskrit texts, he identified two very rare Sanskrit verb-forms and wrote an article about them that was published in the Indo-Iranian Journal.....The Indo-Iranian Journal is a peer-reviewed academic journal focusing on aspects of Indo-Iranian cultures. The journal was started by Jan Willem de Jong and Franciscus Bernardus Jacobus Kuiper in 1957......Editors-in-Chief: Peter Bisschop, Leiden University & Jonathan Silk, Leiden University.......The Indo-Iranian Journal (IIJ), founded in 1957, is a peer-reviewed journal that focuses on the ancient and medieval languages and cultures of South Asia and of pre-Islamic Iran. It publishes articles on Indo-Iranian languages (linguistics and literatures), such as Sanskrit, Avestan, Middle Iranian and Middle & New Indo-Aryan. It publishes specialized research on ancient Iranian religion and the Indian religions, such as the Veda, Hinduism, Jainism and Buddhism (including Tibetan). The Journal welcomes epigraphical studies as well as general contributions to the understanding of the (pre-modern) history and culture of South Asia. A substantial part of the Indo-Iranian Journal is reserved for reviews of new research. The Journal predominantly publishes articles in English and occasionally in French and German.".....http://www.brill.com/indo-iranian-journal

"In the Puranas, connected with the Kali-Yuga and Kalki Avatara prophecies, computations utilizing the cycle of the Big Dipper (The Great Bear, in Sanskrit, the Seven Rishis (Saptarsi)....revolving around the circle of the 27 asterisms....staying in each of them for 100 years....this cycle is strikingly similar to the one hundred year reigns of the Kings of Shambhala."...Page 9....Kalachakra Research Publications...No.1...Feb 1986

"Saptarshi is the name of a constellation near celestial pole and also the collective name of the seven sages who carries forward the secret of Kalachakra. This constellation also plays a role in the movement of the wheel of time as some of the stars in it becomes the pole-star due to the precessional movement. It is known as Big Dipper and Ursa Major (Great Bear) in western astronomy. The names of the seven sages differ based on the source text. Popular list include Bhrigu, Atri, Angirasa, Marichi, Pulastya, Pulalaha and Kratu. Sometimes Marichi is replaced by Vasistha and either Atri or Kratu replaced by Agastya.....The Saptarishi (from saptarṣi, a Sanskrit dvigu meaning "seven sages") are the seven rishis who are extolled at many places in the Vedas and Hindu literature. The Vedic Samhitas never enumerate these rishis by name, though later Vedic texts such as the Brahmanas and Upanisads do so. They are regarded in the Vedas as the patriarchs of the Vedic religion.....In some parts of India, people believe these are seven stars of the Big Dipper named "Vashista", "Marichi", "Pulastya", "Pulaha", "Atri", "Angiras" and "Kratu". There is another star slightly visible within it, known as "Arundhati". Arundhati is the wife of Vashista."....In Hindu astronomy the seven stars of the Saptarshi Mandal or Big Dipper or Ursa Major....At the end of every four ages there is a disappearance of the Vedas and it is the province of the seven Rishis to come down upon earth from heaven to give them currency again."....http://ancientvoice.wikidot.com/article:kalachakra

"The Vedas, Epics and Puranas of ancient India describe an interesting concept of time called Kaalachakra, the wheel of time. This wheel of time is conceived as having twelve spokes indicating twelve points of time measurement on the wheel of time. Close examination of the imagery reveals that this concept is related to the Yuga System and used for various kinds of time measurements in ancient India.".......http://sivkishen.wikia.com/wiki/File:Swastika.jpg 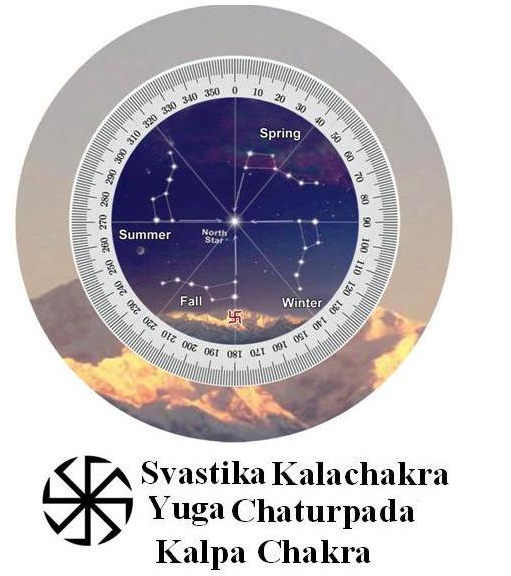 "'Svastika is a Sanskrit word of Swastika. (Tibetan is g.yung drung གཡུང་དྲུང་ ).... It is a composite word consisting of su+ asti +ka. The word ‘su’ means "good, well" and “asti “being"; the suffix “ka” either forms a diminutive or intensifies the literally verbal meaning as "that which is associated with well-being," corresponding to "lucky charm" or "thing that is auspicious. It is lucky or auspicious object, and in particular a mark made on persons and things to denote auspiciousness, or any piece of luck or well-being. It is a symbol that generally takes the form of an equilateral cross, with four legs its four legs bent at 90'°. It is a very sacred and auspicious symbol of Kalachakra, Yuga Dharma and Chaturpada represents seasons as well....Swastika is a symbol of calendar system and is clearly visible at Asthapada Parvata on the west side of Mount Kailash. This is a Kala Chakra or Time Cycle."....http://sivkishen.wikia.com/wiki/File:Swastika.jpg

"The Vimalaprabha on Kdlacakratantra, Abhisekapatala v. 198 explains that verse as meaning that the initiate should promise always to give to his Guru one sixth of all his inherited and self-acquired wealth in the form of gold, jewels, grains and the like, and a sixth of all his livestock. It adds that he is required to give his wife to the Guru five times each month (vol. 2, p. 144, 11. 17-22).".....Vimalaprabha: Vimalaprabhatika of Kalkin Sripundarlka on Srikdlacakra- tantraraja by Srimanjusriyasas, ed. Vrajavallabh Dwivedi and S.S. Bahulkar. Rare Buddhist Text Series 13. Sarnath: Central Institute of Higher Tibetan Studies, 1994......https://archive.org/stream/GenesisAndDevelopmentOfTantra/GenesisDevelopmentOfTantra_djvu.txt

"The Kalacakratantra, SKT ed: 2.2.38-40. The Vimalaprabha, SKT ed: p.177, 1.25- p.179. 1.11. The difference between the system of the fourth typological tradition in ques- tion and that found in these Kalacakra texts can be explained as follows. First, in the Kalacakra system, the inner channels running through the nirmanacakra and the dhar- macakra are not identified with magical females assigned to external holy sites. Second, the Kalacakra system according to the Vimalaprabha equates twelve joints of one's body through which the inner channels run with twelve site-categories and with twelve spiri- tual stages [SKT ed: p. 73, 1.23-24]. (The Kalacakratantra per se does not have this second instruction [SKT ed: 1.7.20].)"..........https://archive.org/stream/GenesisAndDevelopmentOfTantra/GenesisDevelopmentOfTantra_djvu.txt

"Rishi (Sanskrit: ṛṣi, Devanagari: ऋषि) originates from the ancient Hindu culture of the Indus region earth-based cultures. Rishis were the scribes of the large body of nature hymns and spiritual science known as the Vedas….A Rishi (or rishika, when referring to female rishis) is a sage of insight, one who practices self-cultivation as a Yogini or Yogi and attains asamprajñata Samadhi. The Rishi's soul is interpreted as imbibing wisdom directly from the universal source. Vedic hymns are sermons conceived as delivered by divine inspiration by the rishis."….http://en.wikipedia.org/wiki/Rishi