650 A.D......"Iranian-Aryan Relations with the Tibetan Empire....The Tibetan empire established by Songtsen Gampo soon grew in power that extended beyond its borders....The Yarlung dynasty appears to have continued the collaborative relationship the Zhang Zhung had with the Iranian Aryans. The relationship continued even after the Arabs had conquered the Persian empire. Since it is the Tibetans who had become the dominant eastern power in the seventh century AD, it is they who provided the Persians and Sogdians sanctury.....As they fled east, the Persians first took refuge in Sugd (Sogdiana) and their presence there has been recorded on Sogdian inscriptions in Panjakand and Paykand. Then as the Persians and Sogdians continued east into China...... the rise of Tibetan power was because of the assistance of Persian refugees fleeing from the Arab invasion of Persia in the 650s AD. According to Nikitin, when the Persians arrived in the Tibetan court, they trained the Tibetans in the art of imperial warfare. According to another author Beckwith, a Chinese source describes the Yarlung Tibetan warriors and horses as being completely clad in armour in the Sassanian fashion. An important military technological advance and advantage for the Tibetans was their newly acquired ability to produce chain mail for armour.".....http://iranian.com/posts/view/post/7621 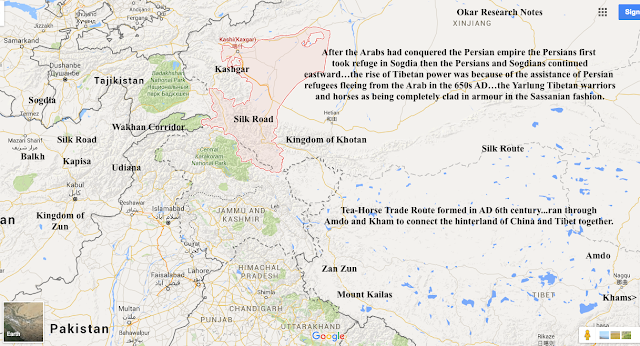 "Tagzig, Zhang-Zhung, Western Tibet........In Tibet there is a minority religion called Bon that long preceded the coming of Buddhism. Present-day Bon practice allies it with Buddhism. However, the original practice may have been quite different........According to Bon tradition, the founder of the orthodox Bon doctrine was Tonpa Shenrab Miwoche of Tagzig some 18,000 years ago. Tagzig is believed to be a form of Tajik and some writers identify the region with Balkh/Bactria. The name Shenrab has an Iranian sound to it......The Bon religion was spread by Shenrab's disciples and their student-translators to adjacent countries such as Zhang-Zhung (also Zhangzhung, Shang Shung or Xang Xung - a land north of the Himalayas, which contained Mount Kailash in today's Western Tibet), India (northern Indus valley cf. Bru-zha / Gilgit), Kashmir (Kha-che), Western China and eventually Greater Tibet. Tonpa Shenrab is reputed to have visited present-day Tibet once. On that visit he found the people unprepared to receive the entire body of his teachings, but he prophesied that his teachings would flourish in Tibet in the coming ages. The students of his disciples continued his mission and Tibetan Bon scriptures were translated from texts in the language of Zhang-Zhung......The Bon tradition provides a close link between the Aryan and Tibetan cultures. In addition to the place of its origin, the Bon tradition includes additional links to Zoroastrian Aryan culture including what Western writers have labelled as 'dualism' and the myths about the original homeland and its Shangri-La like beauty.......Tagzig is more completely called Tagzig Olmo Lung Ring and is described in Bon as a non-dual (one which resides beyond dualism) spiritual realm. The feature of this non-dual realm is that it was a timeless perfect realm where peace and joy were the very fabric of being and evil was not known.......In legend, Tagzig Olmo Lung Ring is said to have been a fragrant land, coloured by beautiful flora and surrounded by snow-capped mountains. It was located west of Mount Kailash.".....ZOROASTRIAN HERITAGE...by K. E. EDULJEE.....http://zoroastrianheritage.blogspot.co.uk/2011/07/iranian-aryan-connections-with-western.html 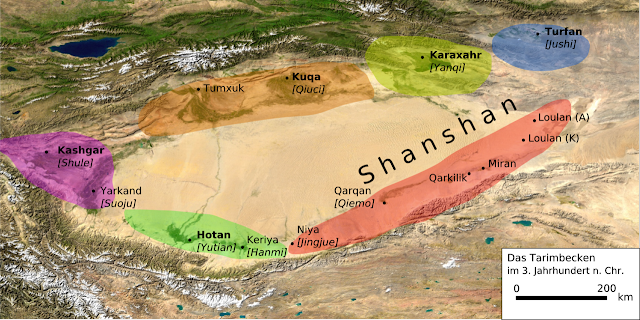 "Given that the Zoroastrian and Bon religions may have existed side-by-side in Central Asia, the Pamirs and the northern Himalayan region, it is quite possible that even during the time of the Iranian Sassanian dynasty c. 224 - 649 CE, the relations between the Zoroastrian Iranians and the Tibetan Buddhists was collaborative. There is evidence that that this collaboration survived even after the overthrow of the Sassanians by the Arabs.....The land of Zhang Zhung on its part continued its dominance of the Tibetan plateau until it was annexed by Songtsen Gampo in the 7th century. Songtsen Gampo was the thirty-third king of the Yarlung Dynasty which ruled the Yarlung River (the Brahmaputra in India) and is revered by Tibetans as the founder of the Tibetan state and empire. He is also said to have introduced Buddhism to Tibet.....The Yarlung dynasty appears to have continued the collaborative relationship the Zhang Zhung had with the Iranian Aryans....After the Arab take over of the Sassanian Iranian state, the Yarlung Tibetans fought against the Arabs together with his Turkic allies in order to expel them from Sugd (Sogdiana).....The Yarlung captured Khotan – an Iranian-Tajik kingdom allied with Kashmir and Sugd (Sogdiana). The Tibetan conquest of Khotan was followed by the immigration of many Khotanese Buddhist monks, craftsmen and merchants into Tibet.".......http://iranian.com/posts/view/post/7621

"Amdo and Kham, East Tibet...... is a historical region of Eastern Tibet covering a land area largely divided between present-day Tibet Autonomous Region and Sichuan province of China.....Chinese linguists and anthropologists refer to Kham as the 'Ethnic Corridor of Southwest China', as its vast and sparsely populated territories are inhabited by over 14 culturally and linguistically distinct ethnic groups......One-third of Kham residents are speakers of Qiangic languages, a family of twelve distinct but interrelated languages that are not closely related to the Khams Tibetan language.....The people of Kham were reputed warriors. They were renowned for their marksmanship and horsemanship...The peoples of Kham have endured a tumultuous past, their sovereignty often encroached upon and marginalized by both Tibetans to the West and the Han Chinese to the East.....The Tibetan Empire emerged in the 7th century, but with the fall of the empire the region soon divided into a variety of territories.....Since the collapse of the Tibetan Empire in the mid-9th century, the peoples of Kham had aggressively maintained their independence from invading nations......In historical times, the people of the region were typically non-Tibetan, such as Mongol or Tibetan of foreign origin such as the Hor people.....Tea-Horse Trade Route formed in AD 6th century... the Tea-Horse Trade Route included 2 major branches, which ran separately through Amdo and Kham to connect the hinterland of China and Tibet together. ." 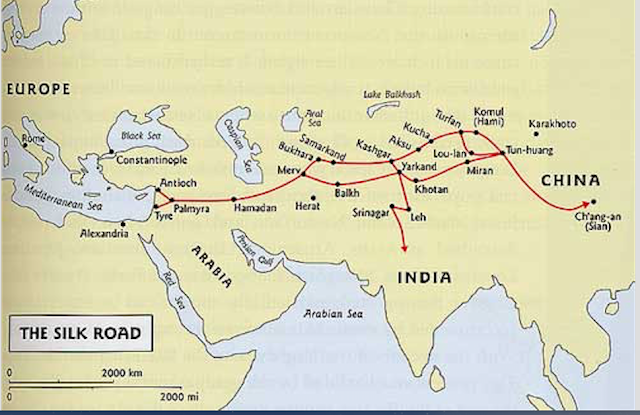 "The Kingdom of Khotan was an ancient Buddhist kingdom that was located on the branch of the Silk Road that ran along the southern edge of the Taklamakan Desert in the Tarim Basin (modern Xinjiang, China). The ancient capital was originally located to the west of modern-day Hotan (Chinese: 和田) at Yotkan. From the Han dynasty until at least the Tang dynasty it was known in Chinese as Yutian (Chinese: 于闐, 于窴, or 於闐). The kingdom existed for over a thousand years until it was conquered by the Muslims in 1006 AD.....According to legend, Kushtana, said to be a son of Ashoka, the Mauryan emperor, founded Khotan when he settled there about 224 BC..... in 640 AD Khotan submitted to the Tang emperor. The Four Garrisons of Anxi was established, one of them at Khotan.......The Tibetans later defeated the Chinese and took control of the Four Garrisons, and the Khotanese helped the Tibetans to conquer Aksu....in the 10th century, the Iranic Saka Buddhist Kingdom of Khotan was the only city-state that was not conquered yet by the Turkic Uyghur (Buddhist) and the Turkic Qarakhanid (Muslim) states....The Islamic conquest of Khotan led to alarm in the east, and it has been suggested it lead to the sealing of Dunhuang's Cave 17, which contained the Dunhuang manuscripts, after its caretakers heard that Khotan's Buddhist buildings were razed by the Muslims, and the Buddhist religion had suddenly ceased to exist in Khotan.....".....Wikipedia