"KARTIR.....a prominent Zoroastrian priest in the second half of the 3rd century CE, known from his inscriptions and mentioned in Middle Persian, Parthian, and Coptic Manichean texts.....Kartīr’s inscriptions are the earliest indigenous written testimonies to the basic tenets of Mazdayasnianism (Zoroastrianism)...... They are therefore of the utmost importance for studying the Mazdayasnian tradition under the early Sasanians....http://www.iranicaonline.org/articles/kartir 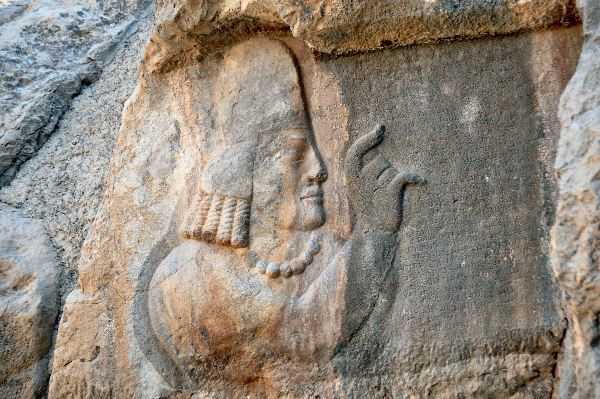 The Sasanian high priest Kartir.....c. 241 - 275 AD....Stone relief of Kartir at Naqsh-e Rajab, an archaeological site just east of Istakhr and about 12 km north of Persepolis in Fars Province, Iran.

"Kartir was probably instrumental in promoting the cause of Mazdaism (as opposed to Zurvanism, the other - now extinct - branch of Zoroastrianism, for in his inscription at Naqsh-e Rajab, Kartir makes plain that he has "decided" that "there is a heaven and there is a hell", thus putting himself at odds with the principles of (fatalistic) Zurvanism.....Nonetheless, it was during the reign of Shapur I (r. 241-272) - to whom Kartir was first appointed advisor - that Zurvanism appears to have developed as a cult, and this contradiction remains an issue of scholastic dispute. Some scholars therefore conclude, at odds with what has been stated above, that Kartir "himself held Zurvanite beliefs"......Simultaneously, Kartir was also a significant force in an iconoclastic movement that would result in the loss of favour of the shrine cults, a religious tradition alien to Indo-Iranian forms of worship that was inherited instead from the Babylonians; shrine cults had been instituted six centuries earlier by Artaxerxes II.....It was during Kartir's time as high priest that the shrines were - by law - stripped of their statues, and then either abandoned or converted into fire temples.".......https://en.wikipedia.org/wiki/Kartir 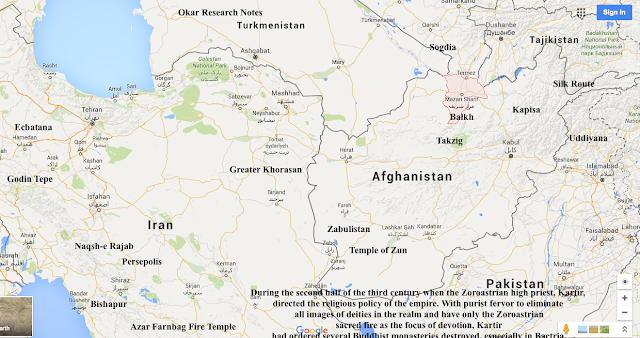 "Shapur I.....the second shahanshah (king of kings) of the Sasanian Empire. The dates of his reign are commonly given as c.240 - 270 A.D......Šāpūr I bestowed upon Kartīr.....various high clerical honors.....Kartīr would perform the various rituals (kerdagān) for the gods, founding Warahrān fires and caring for the priests; sealing charters (pādixšahr) for fires and Magi ... and making priests “happy and prosperous” .....All of this would bring “profit” (sūd) to Ohrmazd and the other gods, while Ahrimen and the “demons” (dēws; see DAĒVA), were harmed and *diminished.".........http://www.iranicaonline.org/articles/kartir

"At this time, the rituals for the gods were increased, and great “satisfaction” (šnūdīh) came to the good creations—the gods, water, fire, and kine (gōspand), while Ahrimen and the demons received “blows” (snah/sneh). They were “opposed, hated” (bištīh), so that “(false) beliefs” (kēš) in them were no longer adhered to in the land.......Non-Mazdayasnians were “struck down” (zad) in the land, including Jews, Shamans (Buddhists), Bramans (Hindus), Christians, Nāṣrā (Nazarenes or Nazoreans), Makdags (baptists? Bailey, 1980), and Zandīgs (Manicheans)....... Idols (uzdēs) were destroyed; the “dens” (gilist) of the demons were obliterated and turned into thrones (gāh) and seats for the gods."........http://www.iranicaonline.org/articles/kartir

".....during the second half of the third century when the Zoroastrian high priest, Kartir, directed the religious policy of the empire. With purist fervor to eliminate all images of deities in the realm and have only the Zoroastrian sacred fire as the focus of devotion, Kartir had ordered several Buddhist monasteries destroyed, especially in Bactria. This was because the statues and wall paintings of Buddha in them incorporated many Zoroastrian elements. For example, Buddhas were often depicted encircled with a halo of flames and an accompanying inscription or graffiti scrawl labeling them as “Buddha-Mazda.” Bactrian Buddhism, then, would have appeared to the high priest as a Zoroastrian heresy. Buddhism revived, however, after Kartir’s persecution.".....http://www.berzinarchives.com/web/en/archives/e-books/unpublished_manuscripts/historical_interaction/pt1/history_cultures_02.html 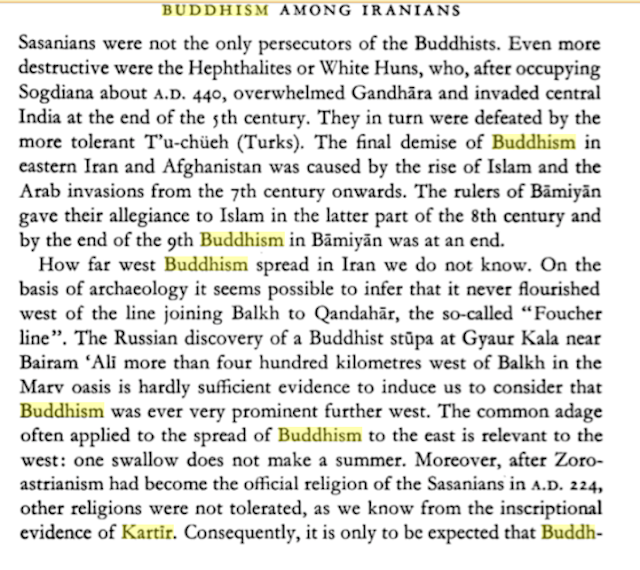 "Kartir and Manicheism......"Because of Kartīr’s involvement in the execution of Mani (c. 216–274 AD) , it has also been suggested that his inscriptions specifically targeted Mani’s teachings.... the conflict between Zurvanism and Mazdaism ....history from the time of Mani’s appearance at the court of Šāpūr until he was executed by Warahrān I in the last months of his reign..... Manicheism was important to the Mazdayasnian restoration because it was considered as a Zoroastrian heresy and priestly opposition to it “might provoke unexpected speculation and re-examination of Zoroastrian doctrine”; he also suggested that it was Kartīr’s part in the Mani debacle that earned him his promotion under Warahrān I .... the notions repeatedly stressed by Kartīr. A person is potentially good, and if he or she behaves according to the Mazdayasnian tradition, the body will reap the benefits while alive and the soul both in this life and after death. This is quite different from the Manichean conception of soul and body, with the transcendental “soul” imprisoned in the corpse-body and the material soul being composed of the basest elements of man. "...........http://www.iranicaonline.org/articles/kartir

"Kartīr’s statement about his treatment of other religions has also spawned comments, notably, in Jewish scholarship on the third century. Jacob Neusner presented Šāpūr as having “encouraged Mani to expound a syncretistic doctrine capable of bringing together” the other religions “under one cult” and Kartir as having “remained submissive to the tolerant policy of the great emperor,” but, after his death, as using his power to reverse Šāpūr’s tolerant policy...... Neusner also interpreted the execution of Mani as a “judicial murder” arranged by Kartīr and his fellow Magi.".............http://www.iranicaonline.org/articles/kartir

"Kartīr’s statement that he “struck down” (zad) other religions suffices to talk about a terror regime and religious obscurantism..... or to conclude that Kartīr was the “most redoubtable enemy of religious minorities” in the history of the Sasanians ..... The verb zad is a traditional, epic term for eliminating evil and does not necessarily refer to killing (which is ōzad).....All the Sasanian kings except Warahrān II were “lukewarm Zoroastrians,” so that, although Kartīr [like Zarathustra himself] “abhorred animal sacrifice” (as proved by his statement regarding Water, fire, and animals).....he had not been able to prevent Šāpūr from performing them...." .........http://www.iranicaonline.org/articles/kartir

Kartir and Zurvanism......"It was the conflict between the current Zurvanism and flourishing Manicheism, both of which “always favoured universalism,” aggravated by Kartīr’s rise to power, that caused Mani’s death and was “put aside to establish Zoroastrianism as a nationalistic religion in Iran” .....He regarded Šāpūr’s Zurvanism as an established fact (referring to Boyce) and argued that Mani “never would have” called his highest god Zurwān if he had not known Zurvanism ....He concluded that the early kings each had a “court theologian” : Ardašīr had Tansar, Šāpūr had Mani, and Ohrmazd and the Warahrāns had Kartīr.."..........http://www.iranicaonline.org/articles/kartir

Kartir and Shamanism...."The shamanistic aspects of the vision narrative were, apparently, first mentioned by Grigorii M. Bongard-Levin and Ėdvin A. Grantovskiĭ (1974), and were repeatedly discussed by Gignoux (1979; 1981, p. 258: journey into the beyond by a living person; 2001, chap. 4) and by James Russell (1990, p. 180: “ecstatic practice generally termed shamanistic in the study of religions”............http://www.iranicaonline.org/articles/kartir