"Haḍḍa (Pashto: هډه‎) is a Greco-Buddhist archeological site located in the ancient region of Gandhara, near the Khyber Pass, ten kilometers south of the city of Jalalabad in eastern Afghanistan." 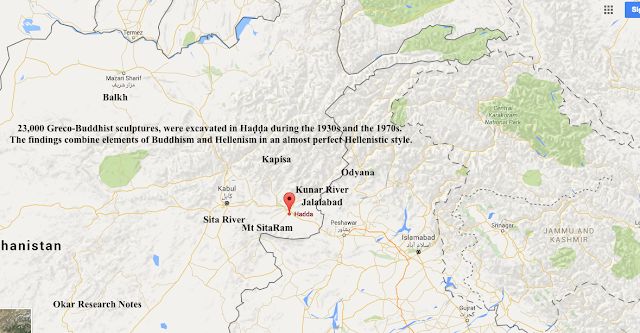 "Some 23,000 Greco-Buddhist sculptures, both clay and plaster, were excavated in Haḍḍa during the 1930s and the 1970s. The findings combine elements of Buddhism and Hellenism in an almost perfect Hellenistic style......Although the style of the artifacts is typical of the late Hellenistic 2nd or 1st century BC, the Haḍḍa sculptures are usually dated (although with some uncertainty), to the 1st century AD or later (i.e. one or two centuries afterward). This discrepancy might be explained by a preservation of late Hellenistic styles for a few centuries in this part of the world. However it is possible that the artifacts actually were produced in the late Hellenistic period......Given the antiquity of these sculptures and a technical refinement indicative of artists fully conversant with all the aspects of Greek sculpture, it has been suggested that Greek communities were directly involved in these realizations, and that "the area might be the cradle of incipient Buddhist sculpture in Indo-Greek style"..... John Boardman, The Diffusion of Classical Art in Antiquity

"Hadda is 10 km south of the Kabul River...... (Kābol Rōd, also called Daryā-ye Kābol), in eastern Afghanistan and tributary of the Indus....its drainage area takes up large proportions of eastern Afghanistan with the nine provinces of Nangarhār, Kunar, Laḡmān, Lōgar, Kabul, Kāpisā, Parvān, Panjšēr, and Bāmiān.....the East flowing Kabul River, which in times past, was known as the Sita, or White River.... In the year 1900 the Russian mystic George Ivanovitch Gurdjieff traveled by raft down part of this river, as part of an expedition led by Prof. Kozlov in search of the ruins of ancient Shambhala.".......http://www.dharmafellowship.org/library/essays/uddiyana.htm

"Captain Sir Alexander Burnes, FRS (16 May 1805 – 2 November 1841) was a Scottish traveller and explorer....His travels continued through Afghanistan across the Hindu Kush to Bukhara (the maps and narrative which he published in England in 1834)" 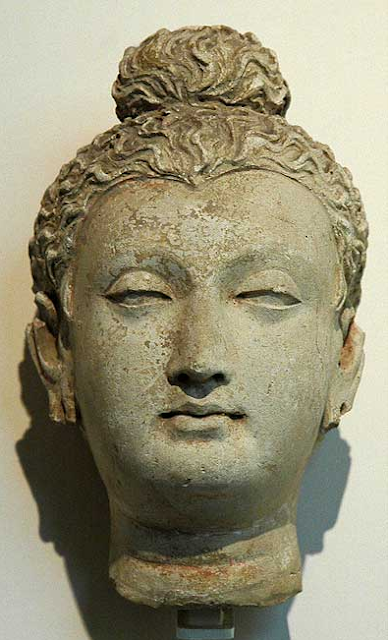 "Musée Guimet:: Afghanistan: Hadda......The Buddhist monastery complex at Hadda in Eastern Afghanistan, not far from Kandahar, yielded a rich trove of sculpture and painting during the French excavations of the late 1930s......Hadda, Monastery of Bagh-Gai. 3rd-4th c. AD.....Barthoux expedition 1927-28.....https://depts.washington.edu/silkroad/museums/mg/hadda.html" 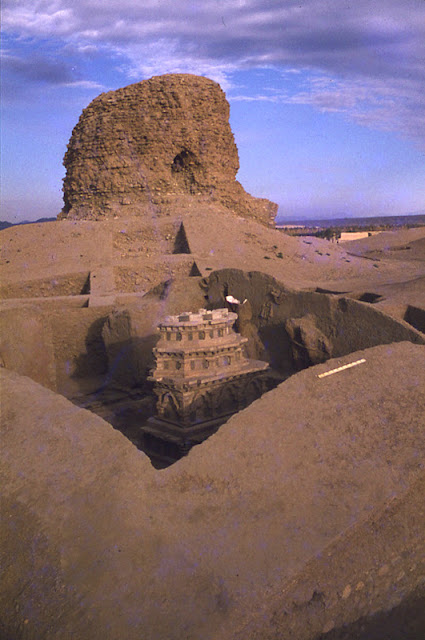 The Buddhist stupa of Tapa Kalan, Hadda (near Jalalabad in the Kabul River valley

"Hadda, a small town 15 km south of Jalalabad (Eastern Afghanistan), owes its fame to the number and beauty of the remains of its Buddhist stūpas, shrines and monasteries scattered over an area of 15 km2 around the urban settlement......Throughout the period of Buddhism’s great flourishing, from the Kushans (1st–3rd century AD) into the 7th century AD, Hadda was a popular pilgrimage destination where, according to the accounts of famous Chinese pilgrims such as Faxian and Xuanzang, various relics of the Buddha’s body and belongings were preserved, each of them enshrined in a stūpa: a bone of the Buddha’s skull and uṣṇīṣa (cranial protuberance), an eyeball, the monastic robe and the ascetic staff....Exploration of the site began in 1834 with Charles Masson, who discovered Graeco-Bactrian, Indo-Scythian, Hunnic, Roman and Byzantine coins inside 14 stūpas in different sacred areas. The most important of these, Tapa Kalan, also yielded fragments of stone and stucco sculptures. Further minor investigations followed, until J. Barthoux of the Délégation Archéologique Française en Afghanistan carried out extensive excavations on various sites from 1926 to 1929.....Their astonishing beauty and liveliness, originally enhanced by a vibrant color, which has only minimally been preserved, and especially their Hellenistic touch aroused great interest......Between the mid-1960s and the end of the 1970s other sites were excavated by Afghan and Japanese teams. Tapa Shotor, one of the most interesting sites to be excavated during this period, revealed shrines housing cultic images and scenes characterized by the theatrical arrangement of the sculptures and their lively background (2nd–5th century AD) as well as an underground room, probably restricted to the monks’ meditation practices, as suggested by the painted decoration (5th–6th century AD) dedicated to the theme of meditation on death......In the course of the Afghan civil war, the majority of known archaeological sites was destroyed by the Taliban."...http://pro.geo.univie.ac.at/projects/khm/showcases/story233?language=en . 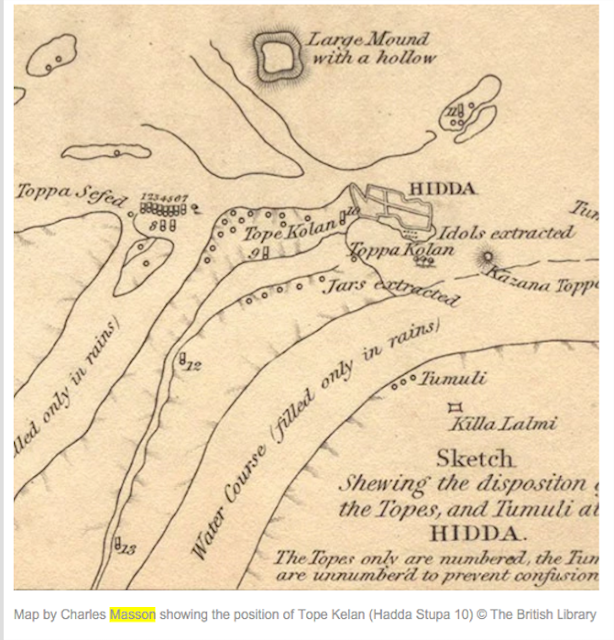 "In 1834, Charles Masson’s excavations in the region of Kabul and Jalalabad included a series of Buddhist ‘Topes’, i.e. stupas (sacred domed structures symbolizing the Buddha). Tope Kelan (Stupa 10) on the outskirts of Hadda, a village south of Jalalabad in south-eastern Afghanistan..... The relic deposit contained more than 200 coins buried along with a variety of over 100 objects including silver rings, gilded bronze, silver and gold reliquaries, glass and semi-precious beads and brass pins including a unique cockerel-headed example. These were buried as part of a Buddhist ritual aimed at earning merit in the afterlife."....http://blog.britishmuseum.org/category/collection/money-gallery/

"The Tope Kelan deposit contains five series of coins, Byzantine gold solidi, Sasanian silver coins, Alchon Hun silver coins, Kidarite Hun gold and silver coins, and a gold coin from Kashmir, all minted before AD 480. The hoard is important evidence of the Silk Route trade network that crisscrossed Europe, Central Asia to China and India in the first millennium AD. The Tope Kelan hoard is thus a testimony to the multiculturalism of ancient Afghanistan with its links to the Indian sub-continent, Iran and China.".......http://blog.britishmuseum.org/category/collection/money-gallery/

"The Buddhist Shrine Complex at Hadda. A Greco-Buddhist archeological site located in the ancient area of Gandhara, six miles south of the city of Jalalabad in eastern Afghanistan, Hadda was one of the largest Buddhist temple and pilgrimmage complexes in the world during the 1st through 3rd centuries AD.......A key location on the 2,000-mile path that pilgrims followed in the transmission of Buddhism from India to China, Hadda was an active center for manuscript translation and duplication as well as sculpture. ....More than 23,000 Greco-Buddhist sculptures made of clay or plaster, architectural decorations plus heads and figures depicting men, women, children, assorted demons, as well as the elderly, with every conceivable mode of expression and dress, every rank and status, every facial type from all corners of the known world — more faces than one would need to re-create an entire Buddhist city — were excavated from Hadda in a series of archaeological excavations during the 1930s and the 1970s. .....Sculptures from Hadda combine elements of Buddhism and Hellenism, in an almost perfect uniquely identifiable Hellenistic style. Although the style itself is suggested by experts to date from the late Hellenistic 2nd or 1st century BC, the sculptures from Hadda are usually dated, tentatively, to the 1st century AD or later. .....Given the early date, superb quality, technical refinement, variety and stupendous quantity of sculptures, Hadda must have been a "factory town" where Greek or Greek-trained artists familiar with all the aspects of Hellenistic sculpture, lived and worked in, what scholar John Boardman described as "the cradle of incipient Buddhist sculpture in Indo-Greek style." .....The transferance of Greek heros to Buddhism (e.g., Herakles being the inspiration and model for the Buddhist Bodhissatva) is fully on display at Hadda. ....A sculptural group excavated at the Hadda temple known as Tapa-i-Shotor, for example, represents a Buddha flanked by a perfectly Hellenistic figure of Tyche holding her cornucopia and Herakles holding not his usual club, but the thunderbolt associated with the Boddhisatva fiture Vajrapani."...http://www.cemml.colostate.edu/cultural/09476/afgh02-08enl.html 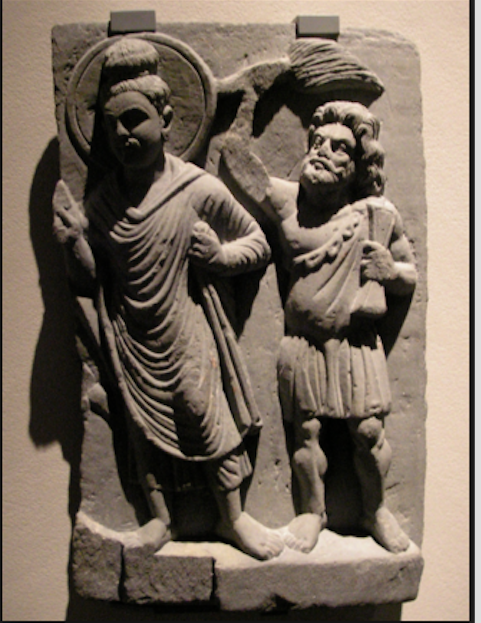 "Hercules and the Buddha....In Gandharan art, the Buddha is often shown under the protection of the Greek god Herakles, standing with his club (and later a diamond rod) resting over his arm...Via the Greco-Buddhist culture, Heraclean symbolism was transmitted to the far east.....Heracles was perhaps the most popular hero god of the Greeks. In the Greek colonies in Bactria and India, the club wielding lion killer, Heracles became Vajrapani a protector of Buddha. Still recognizable as a bearded Greek with a club....which became the diamond thunderbolt).... "

"In addition to sculpture, Hadda contained some of the the oldest surviving Buddhist manuscripts in the world, which are perhaps the oldest surviving Indian manuscripts of any kind,the long-lost canon of the Sarvastivadin Sect that dominated Gandhara and was instrumental in Buddhism's spread from India to China. ....Probably dating from around the 1st century AD, looted from Hadda during the 1990s and smuggled to Pakistan, these Buddhist manuscripts were written on birch bark in the Gandhari language. Discovered in a clay pot bearing an inscription in the same language eventually passed to the British Library in London and the University of Washington in Seattle. The legal ownership of these priceless manuscripts remains in dispute. ....More than 1000 of the vast assemblage of sculptures found at Hadda during the 1930s and 1970s were secured at the Kabul Museum and the Musée Guimet in Paris.".....http://www.cemml.colostate.edu/cultural/09476/afgh02-08enl.html 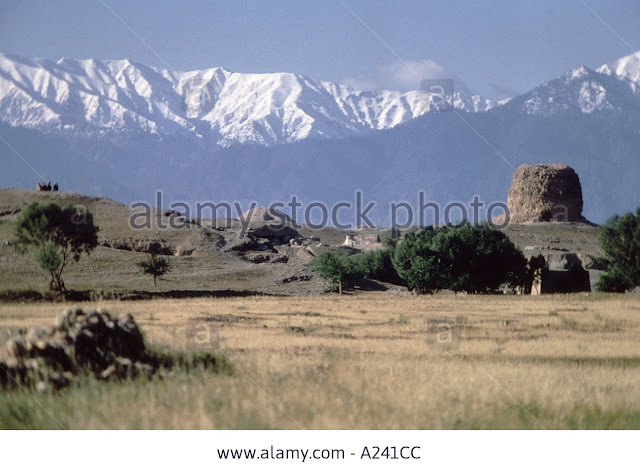