Avestan Geography: The Mixture of Mythical and Historical Elements

"AVESTAN GEOGRAPHY......Geographical references in the Avesta are limited to the regions on the eastern Iranian plateau and on the Indo-Iranian border.....the first stumbling-block in the study of Avestan geography is the mixture of mythical and historical elements....it was common among the Indo-Iranians to identify concepts or features of traditional cosmography—mountains, lakes, rivers, etc.—with their concrete historical and geographical situation as they migrated and settled in various places......... the concept of Mount Harā, or Haraitī, barəz/bərəz or bərə-zaitī “high”, and that of Mount Meru, or Sumeru, in Brahmanical, Buddhist, and Jainist cosmography.......the idea of the seven regions of the earth, the Iranian karšvar- (Pahlavi kešwar) and the Indian dvīpa; the idea of a central region, Xᵛaniraθa (Pahlavi Xwanirah) and Jambūdvīpa; the idea of the “Tree of All Seeds” in the Vourukaša sea, south of the Peak of Harā and the Jambū tree, south of Mount Meru.....the great mountain ranges running from the Hindu Kush to the Pamir and the Himalayas could have inspired the various successive identifications of nordic, polar elements with the ancient cosmology and traditional geography of the Aryans......the main Avestan text of geographical interest is the first chapter of the Vidēvdād. This consists of a list of sixteen districts (asah- and šōiθra-) created by Ahura Mazdā.....the sixteen Great Districts, Ṣoḍaśa mahājanapada, in the Buddhist and Jainist sources and the epic poetry of India in the sixth century B.C., which were subject to the Aryan element." "Airyana Vaēǰah......Airyanem Vaejah lies at the center of the sixteen lands, in the central Afghan highlands....According to Skjærvø, and Gnoli it was situated between the Helmand River and the Hindu Kush Mountains....

"The main Avestan text of geographical interest is the first chapter of the Vendidad (Vidēvdād)......Twenty paragraphs.....paragraphs 2 and 13 deal with Airyana Vaēǰah and Haētumant respectively. The period the text belongs to is uncertain: While the contents and lack of any reference to western Iran suggest that it should date back to the pre-Achaemenian period ( pre 550 B.C.) the form in which it survives would seem to place it in the Parthian period (c. 247 BC) ."

"This geographical part of the Avesta was intended to show the extent of the territory that had been acquired in a period that can not be well defined but that must at any rate have been between Zoroaster’s reforms and the beginning of the Achaemenian empire. The likely dating is therefore between the ninth and seventh centuries B.C., starting from the period of the domination of the Aryan followers of Ahura Mazdā."

"King Menander I, (c. 165 BC) son of Demetrius was born in Bactria, but brought up in Ariana (the Kabul valley) and in the early years of his rule expanded his father’s kingdom to the Indus valley and beyond, perhaps later establishing his capital at Sàgala. Unlike Bactria, which was predominantly influenced by Greek culture, these new areas were already Buddhist. Menander, then, would have been educated in the Greek traditions but would have had direct contact with Buddhism and no doubt often met monks living in his kingdom."....http://www.buddhanet.net/pdf_file/milinda.pdf

"That the geographical horizon of the Mihr Yašt is located in Central Asia emerges from the countries listed in Yt. 10.14. .....The geographical extension of Mihr Yašt covered the eastern part of the Iranian territory, the central part being occupied by the regions of the Hindu Kush, represented by Mount Harā, Iškata (Kūh-e Bābā?), Paruta (Ḡūr?), the district of Herodotus’s Aparútai or Ptolemy’s Paroûtai or Párautoi....Like all texts of the Avesta, the Mihr Yašt belongs to an oral cul­ture of ritual poetry whose roots reach back to the prehistoric Indo-Iranian civilization...The Yashts (Yašts) are a collection of twenty-one hymns in Younger Avestan. Each of these hymns invokes a specific Zoroastrian divinity or concept.."

"MIHR YAŠT...........the name of the tenth of the 21 Yašts of the Avesta (145 verses)......the hymn of the sixteenth day of the 30-day month of the Zoroastrian cal­endar.....Dedicated to Miθra, a ma­jor Zoroastrian deity, it belongs to the hymnic group of Yašts and is one of the longest and most important hymns of the Avesta....stanzas 1-6: Ahura Mazdā requests that Mithra be worshipped and prayed to as much as he, Ahura Mazdā, himself...Mithra rises at dawn and oversees all Aryan countries.... His chariot is drawn by horses, which are spiritual (mainiiauua-), white, radiant, conspicuous, life-giving (spəṇta), knowing, shadeless, and swift.....Haoma worshipped Mithra on Hukairya, which is the highest peak of lofty Haraitī (ALBORZ)......Mithra’s armor is of silver and gold. ....White racehorses pull Mithra’s chariot with its one golden wheel .... .......http://www.iranicaonline.org/articles/mihr-yasht

"Mount Albarez........The root of the name of this mountain is identical to that of the Alburz in northern Iran and the Elbrus in the Caucasus, and therefore, it is likewise derived from the Old Persian term Bərəzaitī (see Hara Berezaiti), meaning "high," "tall," "of stature." The more proper spelling of the name of this mountain is Albarez. Albarez is of the same construct as the names Alburz and Elbrus. The ancient Iranian peoples seem to have given this name to the tallest mountains in any area that they happened to live (exactly as the Turkic people did when they called all the tallest mountains in their sight, "Qaradağ"/Karadag, with the term qara/kara standing for great/big, as well as color black). In fact, into the early 20th century, the northern portions of the Hindu Kush mountains near Balkh/Mazar-i Sharif was also known as Mt. Alburz, as recorded by the British travelers like Alexander Burnes.".....Travels into Bokhara. Being an account of a Journey from India to Cabool, Tartary and Persia. Also, narrative of a Voyage on the Indus from the Sea to Lahore (London: John Murray). 1834. 3 Vols.

"..... the analogy between the Iranian concept of the peak of Harā with the Indian one of Mount Meru or Sumeru. The Manicheans identified Aryān-waižan with the region at the foot of Mount Sumeru that Wishtāsp reigned over, and the Khotanese texts record the identification of Mount Sumeru in Buddhist mythology with the Peak of Harā (ttaira haraysä) in the Avestan tradition.....As for the river of Religious Law.....the most likely hypotheses seem to be those that identify it with the Oxus, or rather the Helmand (The Helmand River rises in the Hindu Kush mountains, about 50 miles west of Kabul)....."....https://en.wikipedia.org/wiki/Avestan_geography#cite_ref-8

ARACHOSIA. (White India.) Substantially the modern Afghanistan......The Helmand valley region is mentioned by name in the Avesta (Fargard 1:13) as the Aryan land of Haetumant, one of the early centers of the Zoroastrian faith in pre-Islamic Afghan history. But owing to the preponderance of Hindus and Buddhists (non-Zoroastrians), the Helmand and Kabul regions were also known as "White India" in those days.....http://parthia.com/doc/parthian_stations.htm

"The Zamyād Yašt, dedicated to Xᵛarənah, is of very great importance for Avestan geography as it provides a surprisingly well-detailed description of the hydrography of the Helmand region, in particular of Hāmūn-e Helmand. In Yt. 19.66-77 nine rivers are mentioned.....other features of Sīstāni geography recur in the same yašt, like the Kąsaoya lake (Pahlavi Kayānsih) or Mount Uši.δām (Kūh-e Ḵᵛāǰa), both closely bound up with Zoroastrian eschatology, so that with the help of comparisons with Pahlavi and classical sources, mainly Pliny and Ptolemy..... we can conclude that the Zamyād Yašt describes Sīstān with great care and attention. In Avestan geography no other region has received such treatment.....yet another reference to Sīstān is to be found it another passage of the great yašts, Yt. 5.108, in which Kavi Vīštāspa, prince and patron of Zoroaster, is represented in the act of making sacrifice to Arədvī Sūrā Anāhitā near Frazdānu, the Frazdān of Pahlavi literature, that is, one of the wonders of Sīstān; it can probably be identified with Gowd-e Zera (Godzareh)....."

"Sīstān (Persian/Baloch/Pashto: سیستان), known in ancient times as Sakastan (Persian/Baloch/Pashto: ساكاستان; "the land of the Saka"), is a historical and geographical region in present-day eastern Iran (Sistan and Baluchestan Province), southern Afghanistan (Nimruz, Kandahar, and Zabul Province), and the Nok Kundi region of Balochistan (western Pakistan).....In the Shahnameh, Sistan is also referred to as Zabulistan, after the region in the eastern part of Iran. In Ferdowsi's epic, Zabulistan is in turn described to be the homeland of the mythological hero Rostam...."

"Arachosia....is the Hellenized name of an ancient satrapy in the eastern part of the Achaemenid, Seleucid, Parthian, Greco-Bactrian, and Indo-Scythian empires. Arachosia was centred on Arghandab valley in modern-day southern Afghanistan, and extended east to as far as the Indus River in modern-day Pakistan. The main river of Arachosia was called Arachōtós, now known as the Arghandab River, a tributary of the Helmand River. The Greek term "Arachosia" corresponds to the Aryan land of Harauti which was around modern-day Helmand. The Arachosian capital or metropolis was called Alexandria or Alexandropolis and lay in what is today Kandahar in Afghanistan. Arachosia was a part of the region of ancient Ariana.....

Nations of the Vendidad - Aryan Prehistory......http://www.heritageinstitute.com/zoroastrianism/maps/vendidad.htm 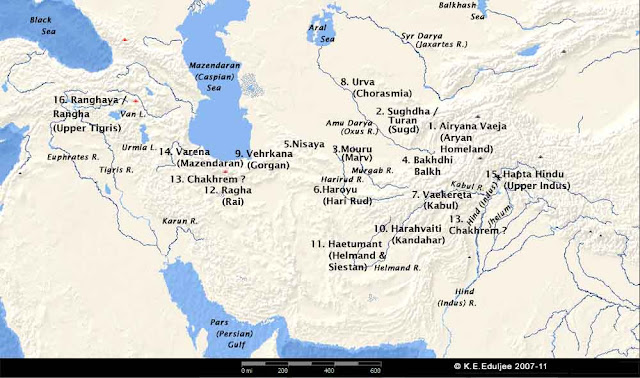