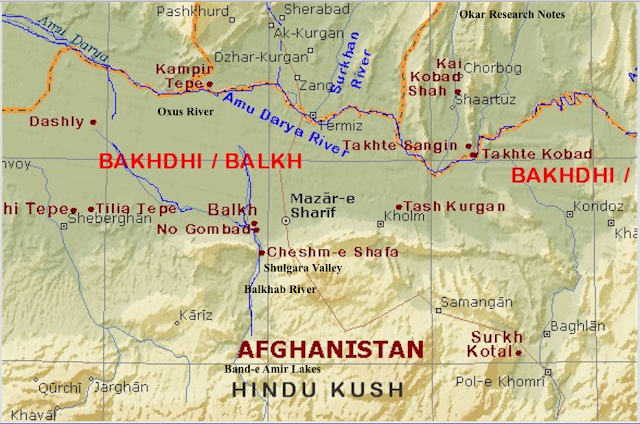 "The Shulgara Valley is next to Chashma-i-Shafa and is located near Balkh, Afghanistan......Location of Bactra and Zariaspa?.....Recent research by David Adams (an experienced Australian documentary maker and photo-journalist) and his research team suggests that Bactra and Zariaspa are not synonymous with Balkh but are located further south in the Shulgara Valley in the Paraopamisus mountain range. This was presented in Episode 2 - The Mother of All Cities in his series Alexander's Lost World. The location proposed is backed by circumstantial evidence including consistency with contemporary accounts (the site of modern Balkh is not) and the presence of archaeological ruins which are consistent with contemporary accounts; the ruins are the subject of a French archaelogical dig. According to Adams, contemporary Greek accounts describe Bactra and Zariaspa as twin cities and 'that the two cities lay at the foot of the Paraopamisus mountains and the Bactra river flowed past their walls.".........https://en.wikipedia.org/wiki/Talk%3ABalkh 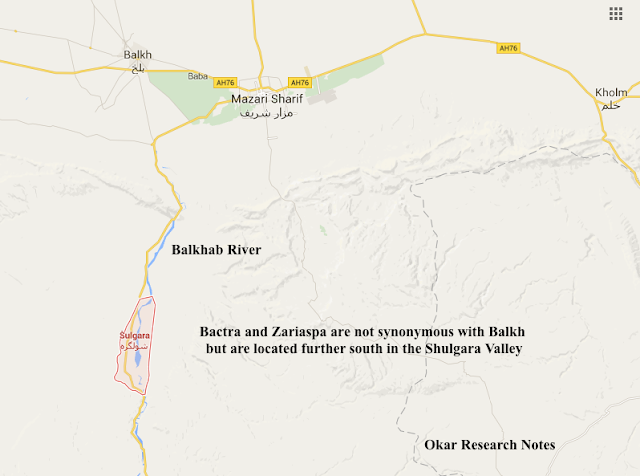 "Cheshmeh-ye Shafa is a village in Balkh Province in northern Afghanistan.....On October 2008, French archaeologists believed they have found a vast ancient city of Bactria......Coordinates: 36°32′0″N 66°58′0″E....Perched high above an important pass between Central Asia and the road to India, the fortifications of Cheshm-e Shafa were a crucial stronghold for a succession of empires for more than 1,500 years beginning in the 5th century B.C."...Edge of an Empire....October 2011 by Andrew Lawler 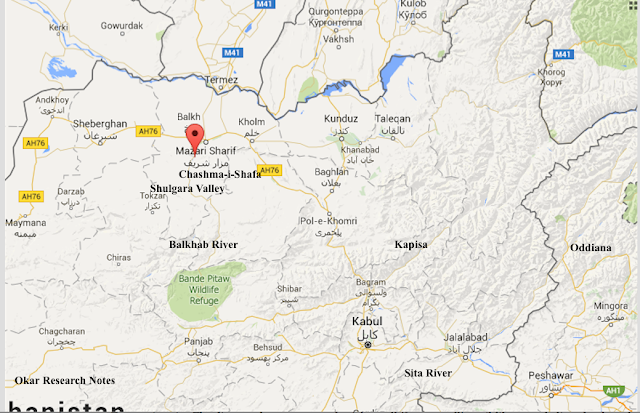 "Cheshm-e-Shafa.......In the spring of 2008 French and Afghan archaeologists announced that they had uncovered the ruins of a vast, hither-to unknown, ancient city at Cheshm-e-Shafa, the 'City of Infidels' (Unbelievers), some 20 miles (30 kilometres) from the ruins of Balkh fortress..... this was once an important Zoroastrian city. The dig team have uncovered a 6-foot-tall (2-meter-tall) anvil-like stone believed to have been an altar at a fire temple dating back to around the 6th century BC. "....http://www.heritageinstitute.com/zoroastrianism/balkh/balkh2.htm 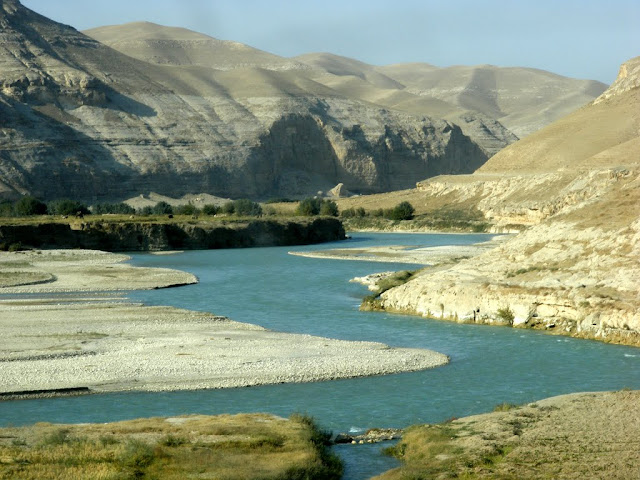 "Balkhab River in Shulgara........The picture with the title 'Shulgara River' banks was taken by the photographer Mike1971 on 11 June 2011 and published over Panoramio. Shulgara River banks is next to Qizil Kand and is located in Balkh, Afghanistan....Photo taken in Chimtal, Afghanistan".....http://www.panoramio.com/photo/54055792 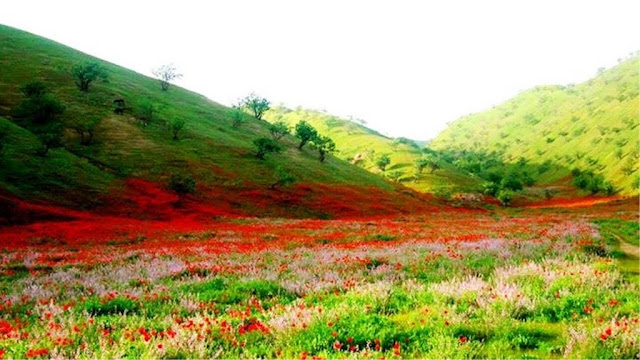 "The Achaemenid palace in Bactra (modern Balkh in N-Afghanistan) has been discovered. This is the place where Alexander spent the winter of 329/328 BC, and where Bessus was sentenced to death (and probably crucified); it may have been the place where Alexander married Roxane in 327 BC. .....http://forum.alexander-the-great.co.uk/viewtopic.php?t=1320&sid=b3470178438a68d27a654935e62e2aab

"Marmul in Balkh (region) is a city in Afghanistan - about 175 mi (or 281 km) North-West of Kabul, the country's capital.....Travel warnings are updated daily: This country is marked as DO NOT TRAVEL.....

"A Korean construction firm is constructing a highway that happens over the archaeological place.....French archaeologists who work there have put themselves in front of the machines to prevent the place from being destroyed."...http://www.telegraph.co.uk/news/worldnews/asia/afghanistan/5685992/Ancient-settlement-could-be-bulldozed.html) 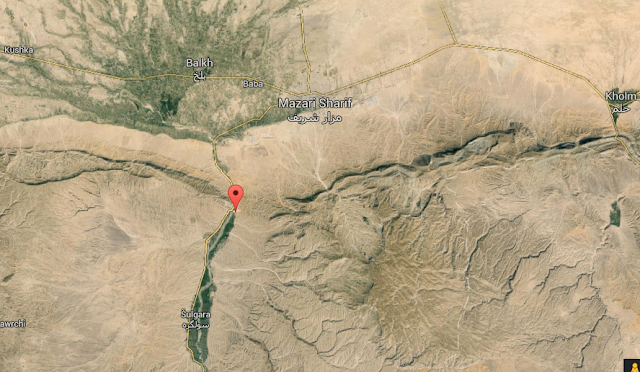 "CHESHM-E-SHAFA, Afghanistan — Centuries-old shards of pottery mingle with spent ammunition rounds on a wind-swept mountainside in northern Afghanistan where French archaeologists believe they have found a vast ancient city. For years, villagers have dug the baked earth on the heights of Cheshm-e-Shafa for pottery and coins to sell to antique smugglers. Tracts of the site that locals call the "City of Infidels" look like a battleground, scarred by craters......But now tribesmen dig angular trenches and preserve fragile walls, working as laborers on an excavation atop a promontory. To the north and east lies an undulating landscape of barren red-tinted rock that was once the ancient kingdom of Bactria; to the south a still-verdant valley that leads to the famed Buddhist ruins at Bamiyan.....Roland Besenval, director of the French Archaeological Delegation in Afghanistan and leading the excavation, is sanguine about his helpers' previous harvesting of the site. "Generally the old looters make the best diggers," he said with a shrug.....A trip around the northern province of Balkh is like an odyssey through the centuries, spanning the ancient Persian empire, the conquests of Alexander the Great and the arrival of Islam. The French mission has mapped some 135 sites of archaeological interest in the region, best known for the ancient trove found by a Soviet archaeologist in the 1970s......The Bactrian Hoard consisted of exquisite gold jewelry and ornaments from graves of wealthy nomads, dated to the 1st century A.D. It was concealed by its keepers in the vaults of the presidential palace in Kabul from the Taliban regime and finally unlocked after the militia's ouster.....The treasure, currently on exhibition in the United States, demonstrates the rich culture that once thrived here, blending influences from the web of trails and trading routes known as the Silk Road, that spread from Rome and Greece to the Far East and India.".....http://www.nbcnews.com/id/26095077/ns/technology_and_science-science/t/ancient-city-uncovered-afghanistan/#.VmQ0z-MrKRs

"The Old Iranian name of Paktra, which the classical writers named it Bactria and their language was known as Bactrian, and after invasion of Iran by Arabs in 7th century CE it has come to be called Balkh;.....Not much has been known about this empire, only some coins and a little bit of writing and occasional archaeological artifacts. Much of the work on excavations of Bactrian artifacts has been done by French Archaeologists. Historians find remote references in other people's records about the kingdom.....It was from Bactria that came prophet Zarathushtra (Zartosht/Zardosht). Another source of spiritual home that made Bactria sacred was a great temple of the ancient Iranian goddess, Anahit (in Pahlavi or Middle-Persian) and Anahita (Ânâhitâ) in the Avesta hymns.......The temple was so rich that often it attracted the needy Syrian kings who sat out to plunder it. In her name and honor, in Armenia, girls prostituted themselves. Anaitis was a Scythian goddess, but she is identified also as Assyrian Mylitta, the Arabian Alytta and the Greek Venus Urania. Artaxerxes Mnemon, one of the emperors of Achaemenid dynasty was among her devotees. She is also associated with the Persian Mithra. Her association with Zoroaster adds to her popularity......Bactria, by some writers, is called "the pride of Ariana". The ancient local citizen called it "Bactria the beautiful". Bactria was popular for its fertility. Besides Oxus, the Arius [modern Hari-rud] and a few other smaller river irrigate it. A large variety of fruits and vegetables grows here and excellent breed of sheep were raised in green Hindu Kush slopes. Bacteria is also known for its camels......However, the most popular of the Bactrian animals is the Bactrian horse. This animal played a partial role in the reputation of Bactrian cavalry in the ancient world......The once well watered land of Bactria and its fair climate has generally changed. The courses of the rivers have shifted, thus Bactria is not as glorious as it had been during the Macedonian occupation. The river Oxus once poured into the Caspian Sea, but now it flows into the Aral Sea. The modern city of Balkh [the old Bactrus], stood on the banks of this river, but now the city is a few miles away from the mighty Oxus.......Another feature of Bactria was the succession of mighty natural forts (Kalas) spread over the country, asserting to the traveler the safety and excellent strategical position of the city.".......http://www.iranchamber.com/geography/articles/balkh.php#sthash.wcCpbkoU.dpuf

"The Aryans and the Iranians of Bactria, had a lot in common. They spoke the same language, worshiped the forces of nature, such as: Varuna, the shining Vault of Heaven; Mithra, the friendly light of the sun; Vayu; the wind that pushes aside the storms and clears the heaven; Yama, the primeval man, reigning over the blessed souls in paradise. The powers of nature, to them, were the signs of something far more deeply interfused. In their ceremonies they also drunk the sacred Juice, Soma. These two races slowly drifted apart as time went on, for not known reasons.".....http://www.iranchamber.com/geography/articles/balkh.php#sthash.wcCpbkoU.dpuf

"It is probably Zarathushtra who changes the religion of the Iranians from the old Aryan to the Zarathushtrian. By this time, the language also changed. Iranians held the fire sacred and stopped burning their dead, instead they exposed the dead to the birds. Out of the old religion came new practices, for example, holding some animals sacred....Also minute rituals were created around new practices. Lastly, the existence of a dualism in Nature appeared. They explained Evil as the work of the lord of the Hosts of Daeva...... The legend is that Zarathushtra appeared during the reign of Gushtaspa at "Bactra the beautiful, city of the high - streaming banner". Zarathushtra's wife's family were very influential in the Royal court, that helped Zarathushtra spread his religion. Hence, Bactria became the heart of the new creed. According to Ferdowsi. Zarathushtra was killed by an invading Scythian party in front of his fire-altar, in Balkh".......http://www.iranchamber.com/geography/articles/balkh.php#sthash.wcCpbkoU.dpuf