The Bon Tradition & The Naubahar/NoGombad Ruins of Balkh

"The Naubahar / No Gombad ruins are located just south of the city of Balkh and are variously described as being an ancient Zoroastrian fire temple, a pre-Zoroastrian fire temple that was converted into a Buddhist temple and then into a Islamic mosque. 'Nau' or 'no' can be translated as 'Nine'. .....'Bahar' can be translated as 'spring'.......... 'No Gombad', a more recent name, means nine domes.......The indications are that the present structure, dated between 850 - 900 AD, was built over an earlier structure that could have been constructed as early as the first century BC."

"Bon doctrine and practice appear to have evolved greatly during the past thousand years and it is at times difficult to distinguish some of Bon's original teachings from its more modern borrowings from Buddhism, Hindu Saivism (Shiva worship) and even possibly Islam."

"The question of Indo-Iranian influence on Bön has been open for a long time now. Seeking to explain some linguistic and cultural parallels, several scholars have brought forward different theories of how and when Bön could have been influenced by the Indo-Iranian culture and religion. These theories could be broadly summed up.......

1. Traditional Bon View............"Yungdrung Bön is the original, authentic Central Asian Buddhism taught by the Buddha Tonpa Shenrab Miwo who was born in 16,017 BC (according to tradition) in the Central Asian region of Tagzig (modern-day Tajikistan and surrounding Central Asian states). Tonpa Shenrab Miwo brought Yungdrung Bön teachings to the Zhang Zhung Confederation (tribal union of 18 tribes) and Tibet (at that time only U and Tsang provinces) himself, and that is the source of most Indo-Iranian linguistic and cultural traces found in Tibetan Bön.......http://www.boandbon.com/bon&indo-iranians.html

"........living Bönpo scholars such as Yongdzin Lopön Tenzin Namdak Rinpoche - on Bön history, religion, culture and possible routes by which it may have spread in and out of the ancient Zhang Zhung Confederation. In Chapter XV the inter-connectedness of the ancient peoples (Hunnu, Syanbi, Tuyuhun'-Azha, Tokharians, Scythians and so on....

2. "Bön (Yungdrung Bön) .......from the Iranian speaking regions in the West (such as Kushana Empire and so on) from where it reached the Tibetan Plateau prior to the introduction of Indian Buddhism per se from the South in the 8th century AD......mixed with the native culture and religion of the Tibetan Plateau producing what is now known as Yungdrung Bön. (Snellgrove, Tucci)...http://www.boandbon.com/bon&indo-iranians.html

".....regarding Aryan influence on Bon, there exists the possibility that Bon could have adopted its dualism doctrine in Central Asia from the early Indo-Iranians.."..........http://zoroastrianheritage.blogspot.com/2011/07/bon-zoroastrianism-dualism_20.html

"....the doctrine could have been brought over later by Iranians (including Sogdians) who fled to Tibet following the Islamic invasion.".........http://zoroastrianheritage.blogspot.com/2011/07/bon-zoroastrianism-dualism_20.html

"According to Kuznetsov, Bon was introduced to Tibet in the fifth century BC, when there occurred a mass migration of Iranians from Sogdhiana in north-east Iran to the northern parts of Tibet. They brought with them an ancient form of polytheistic Mithraism and the Araimic alphabet, named after Aramaiti, the Iranian Earth Goddess." .....(June Campbell: "Traveller in Space" 1968)

3. Bön as a branch of Zoroastrianism or Mithraism.......... and Tonpa Shenrab Miwo was a priest at the court of the Persian king Cyrus the Great (c. 600 – 530 BC ) of the Achaemenid dynasty. (Gumilev, Kuznetsov).....http://www.boandbon.com/bon&indo-iranians.html

"In about 763 AD the Uighur Buddhist ruler converted to Manichaeism...."

"The Number Nine.........Haúr-vatát, “heil, health, happiness” and the number 9....In the Avestan lore (HÓRDÁD YAŠT) haúr-vatát is closely associated with the number NINE, a symbol of wondrous knowledge and power......Nine is a supremely powerful and key number in the Zoroastrian tradition. Nine is the basis of much ceremonial and ritual in Zoroastrianism. Nine symbolizes a synthesis of spirit/mind and the material, a whole wisdom/knowledge of heaven and earth, wonders of the seen and unseen realms. It impressed early mathematicians that multiplications by nine always produced digits that added up to nine.....The name Haúr-vatát has changed to khordád in Persian. It has been translated as Avirdāda, udaka “waters of wisdom” and sarvapravṛttihá “source of everything” in the Sanskrit commentaries of Nairyösang on the poetic gathas."........http://authenticgathazoroastrianism.org/2014/05/30/haur-vatat-heil-health-happiness-and-the-number-9/

"The Naubahar / No Gombad ruins are located just south of the city of Balkh and are variously described as being those of a mosque, a Zoroastrian fire temple, and a fire temple that was converted into a Buddhist temple and then into a mosque. 'Nau' or 'no' can mean 'new' or 'Nine'. 'Bahar' can mean 'spring'. 'No Gombad', a more recent name, means nine domes.......The indications are that the present structure, dated between 850 - 900 AD, was built over an earlier structure that could have been constructed as early as the first century BC." 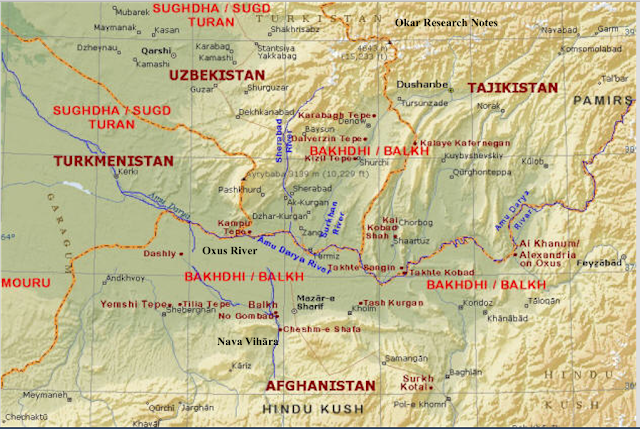 "The Nava Vihāra (Sanskrit: नवविहार "New Monastery", modern Nowbahār, Persian: نوبهار‎‎) were two Buddhist monasteries close to the ancient city of Balkh in northern Afghanistan. The temples and monasteries of Nava Vihara are spread over a very large area about 20 kilometres (12 mi) south of Balkh above Chesme-ye Safā (Persian: چشمه صفا‎‎ "Clear Spring"), not far from the Koh e Alburz."

4. Yungdrung Bön as a plagiarized form of Indian Buddhism............. which emerged after the 8th century AD and any Indo-Iranian - and especially Indian - influence was acquired in this process. (This is the view of many Tibetan Buddhist scholars and some Western scholars who still follow this outdated and flimsy theory.).........http://www.boandbon.com/bon&indo-iranians.html 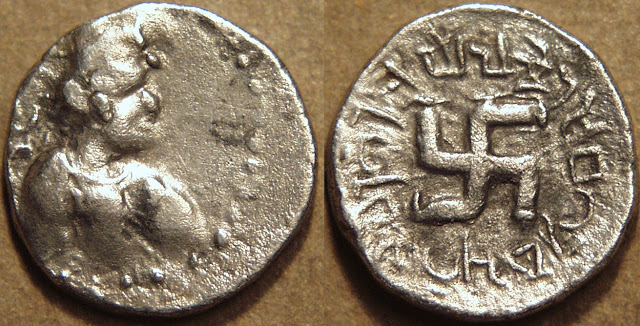 "The body of Shenlha Wokar is white...his ontological status is than of bonku, 'unconditioned being' or 'supreme being', corresponding to the Buddhist category of dharmakaya...His association with light suggests Manichaean influences....The colour of his body is like the essence of crystal...his ornaments, attire, and palace are adorned by crystal light..." (Paul:1982) (Hoffman:1979,pg 105) (Kvaerne:1996, pg 26)

SHENRAB...."his origins are said to be in Iran-Elam and his name is given as Mithra. The Tibetan word Tsug-Pu (gtsug.phud) meaning 'crown of the head' approximates the actual word Mithra." Campbell, June...."Traveller in Space".....New York:1996...pg 37 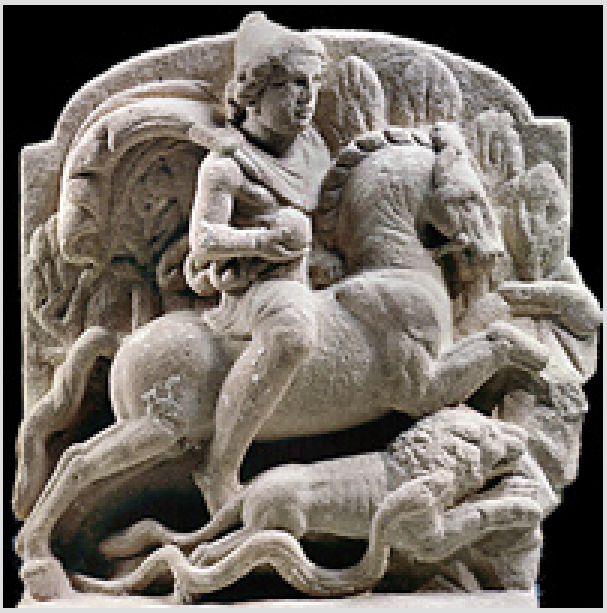 "On coins of the Arsacids the seated archer dressed as a Parthian horseman has been interpreted as Mithra. In the Kushan empire Mithra is among the deities most frequently depicted on the coinage, always as a young solar god."

"Chogyam Trungpa sketched in the outlines of what a Shambhala culture means. “Shambhala is our way of life. The Shambhala principle is our way of life. Shambhala is the Central Asian kingdom that developed in the countries of the Middle East, Russia, China, and Tibet altogether. The basic idea of Shambhala vision is that a sane society developed out of that culture, and we are trying to emulate that vision. That particular system broke down into the Taoist tradition and Bon tradition of Tibet, the Islamic tradition of the Middle East, and whatever tradition Russia might have. It has broken into various factions."