The Kingdom of Zhun and Takzig/Tibetan Bon

"The shrine of Zun in Zamindawar, which was believed to be located about three miles south of Musa Qala in today's Helmand Province of Afghanistan.......Scholars have noted several similarities between the religion of Zhun and the pre-Buddhist, religion of Tibet ......" 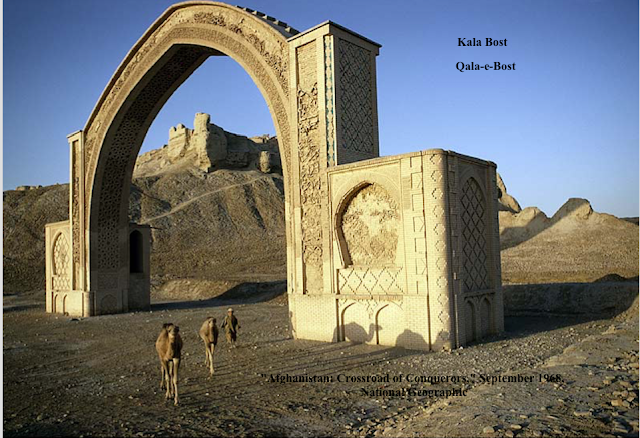 "CULT of ZHUN........Before Islam reached Afghanistan the population followed several religious traditions, some imported (including Zoroastrianism, Hinduism, and Buddhism), others indigenous. Of the indigenous religions we know most about the cult of Zhun (Zun), because it was described in some detail by a Chinese Buddhist pilgrim, Xuan Zang, who visited Afghanistan shortly before the Arab invasion (BOSWORTH 1984, 4-7). Based on the worship of a golden idol with ruby eyes, the cult of Zhun (widespread throughout Zamindawar and Zabulistan) survived for two centuries after the arrival of Islam. The idol was housed in a temple, in front of which stood the vertebra of a giant reptile, locally believed to be that of a dragon. The priests of Zhun seem to have possessed shaman-like abilities, for Xuan Zang describes them as having powers to control demons and other supernatural forces and being able to both heal and harm people (BoswoRTH 1984, 6).

"Zunbils ruled Zamindawar before Islamization of the area. The title Zunbil can be traced back to the Middle-Persian original Zūn-dātbar, 'Zun the Justice-giver'. The geographical name Zamindawar would also reflect this, from Middle-Persian 'Zamin-i dātbar' (Land of the Justice-giver).....Zamindawar is a historical district of Afghanistan, situated on the right bank of the Helmand River to the northwest of Kandahar.... André Wink: In southern and eastern Afghanistan, the regions of Zamindawar and Zabulistan or Zabul (Jabala, Kapisha, Kia pi shi) and Kabul, the Arabs were effectively opposed for more than two centuries, from 643 to 870 AD, by the indigenous rulers the Zunbils and the related Kabul-Shahs of the dynasty which became known as the Buddhist-Shahi...... The Zunbil kings worshipped a sun god by the name of Zun from which they derived their name. For example, André Wink writes that "the cult of Zun was primarily 'Hindu', not Buddhist or Zoroastrian... the shrine of Zun in Zamindawar, which was believed to be located about three miles south of Musa Qala in today's Helmand Province of Afghanistan."

"TIBETAN BON.........Scholars have noted several similarities between the religion of Zhun, the shamanic religions of Central Asia, and the pre-Buddhist, dragon-god religion of Tibet (Bosworth 1984, 7)......Following Afghanistan's conversion to Islam during the seventh century AD., many of the pre-existing shamanistic beliefs and practices were incorporated into the framework of Muslim cosmology. The ecstatic techniques associated with Islam's mystical Sufi tradition must have lent themselves particularly well to the assimilation of indigenous shamanistic practices." 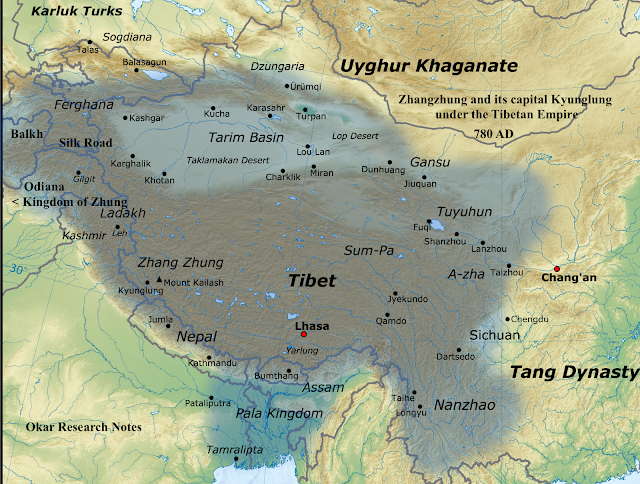 "The Bon religion of the royal period (seventh to ninth centuries) is said to have come from Tazig (stag gzig, Tajik/Iran) via Zhang Zhung, and Zhang Zhung is the probable source of other early components of Tibetan civilization. A pre-Buddhist shamanistic religion prevalent in early Tibet, Bon developed just west of Mount Kailash in Guge (gu ge), the capital of the ancient kingdom of Zhang Zhung. Like the Buddhists who came centuries after him, Tonpa Shenrab Miwoche (ston pa gshen rab mi bo che) combined the various native mystical cults under his own to fashion Bon, or Bön. He settled in Zhang Zhung, presently known as western Tibet's Guge region. Centered on the Tibetan Plateau, the tale of the kingdom of the Bon people is of profound importance, for it was from the Bon kingdom of Zhang Zhung that the myth of Shambhala arose. Shambhala, named Olmo Lung Ring ('ol-mo lung-rings), was considered to be one of the great centers of the Zhang Zhung culture of central Tibet. These people settled in Tibet and practiced some form of ritual Bon culture, which must have evolved from Hinduism and Zoroastrianism."....http://www.yungdrung.org/doc/Compilation_History_Zhang_Zhung.pdf

"Musa Qala ('Fortress of Moses') is a town and the district center of Musa Qala District in Helmand Province, Afghanistan. It sits at 32.4433°N 64.7444°E and at 1043 meters altitude in the valley of Musa Qala River in the central western part of the district. It is in a desolate area, populated by native Pashtun tribes......

"Sangin is a town in the valley of the Helmand River at 888 m altitude, 95 km to the north-east of Lashkar Gah. Sangin is notorious as one of the central locations of the opium trade in the south of the country, and is also a town that has traditionally supported the Taliban. It was described by British newspaper The Guardian as "the deadliest area in Afghanistan". 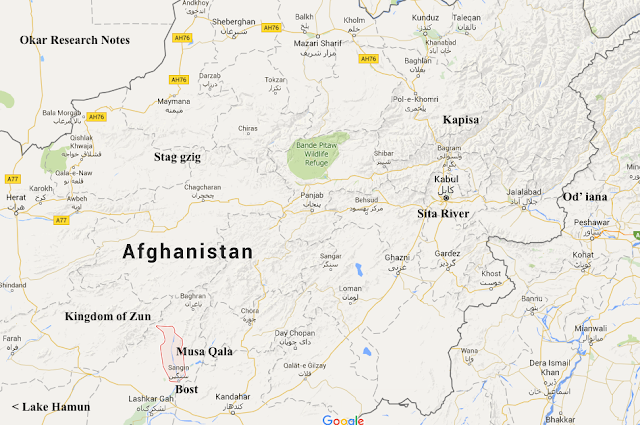 "Lashkar Gah historically also called Bost (Persian: بُسْت‎‎), is the capital of Helmand Province. It is located in Lashkar Gah district, and situated between the Helmand and Arghandab rivers. The city is linked by major roads with Kandahar to the east, Zaranj to the west, and Herat to the north-west. .....Lashkar Gah was part of the Saffarids in the 9th century. It grew up a thousand years ago as a riverside barracks town for soldiers accompanying the Ghaznavid nobility to their grand winter capital of Bost. The ruins of the Ghaznavid mansions (Qala-e-Bost )......still stand along the Helmand River; the city of Bost and its outlying communities were sacked in successive centuries by the Ghorids, Mongols, and Timurids. 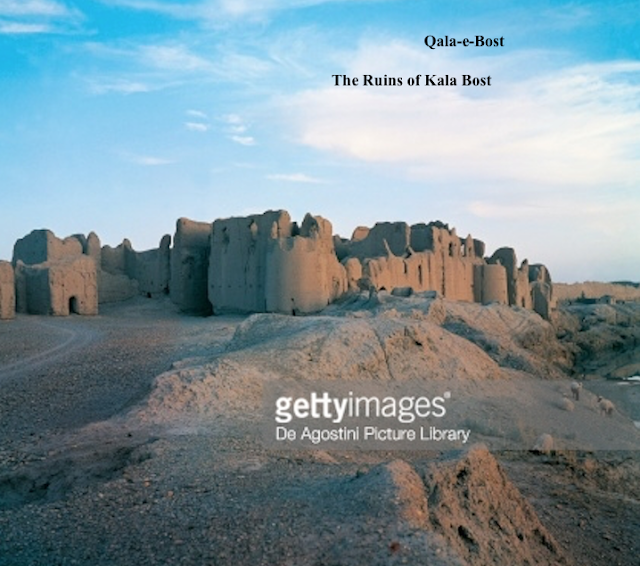 "The great fortress of Bost, Qala-e-Bost, remains an impressive ruin. It is located at 31° 30’ 02″ N, 64° 21’ 24″ E near the convergence of the Helmand and Arghandab Rivers, a half hour's drive south of Lashkar Gah. Qala-e-Bost is famous for its decorative arch.....As of April 2008, it was possible to descend into an ancient shaft about 20 feet across and 200 feet deep, with a series of dark side rooms and a spiral staircase leading to the bottom. In 2006 construction began on a cobblestone road to lead from the south of Lashkar Gah to the Qala-e-Bost Arch (known to readers of James A. Michener's Caravans as Qala Bist.)" 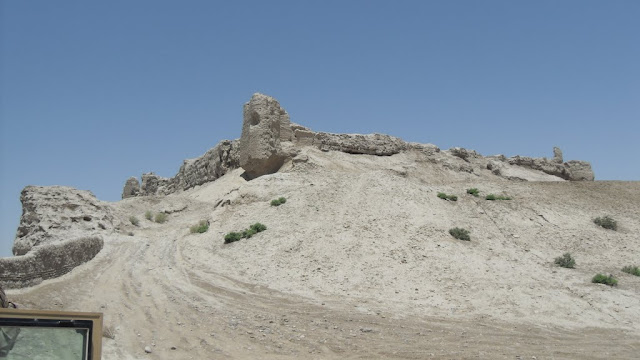 "Zhang Zhung (transcribed Zhang Zhung, Shang Shung, Zan Zun or Tibetan Pinyin Xang Xung)was an ancient culture and kingdom of western and northwestern Tibet, which pre-dates the culture of Tibetan Buddhism in Tibet. Zhangzhung culture is associated with the Bon religion, which in turn, has influenced the philosophies and practices of Tibetan Buddhism....The Zhang Zhung culture was centered around sacred Mount Kailash and extended west to Sarmatians..... the area of Shang Shung was not historically a part of Tibet and was a distinctly foreign territory to the Tibetans.....about 950 AD, the Hindu King of Kabul had a statue of Vişņu, of the Kashmiri type (with three heads), which he claimed had been given him by the king of the Bhota (Tibetans) who, in turn had obtained it from Kailāśa.....Zhang Zhung flourished until around 700 AD, when deteriorating climate and cultural and religious changes in Tibet combined in its demise."

"The Sarmatians (Latin: Sarmatæ or Sauromatæ, Greek: Σαρμάται, Σαυρομάται) were a large confederation of Iranian people during classical antiquity, flourishing from about the 5th century BC to the 4th century AD. They spoke Scythian, an Indo-European language from the Eastern Iranian family.......Originating in Central Asia, the Sarmatians started their westward migration around the 6th century BC, coming to dominate the closely related Scythians by the 2nd century BC. The Sarmatians differed from the Scythians in their veneration of the god of fire rather than god of nature, and women's prominent role in warfare......Like the Scythians, Sarmatians were of a Caucasoid appearance....."

"According to the Bönpo tradition, although Yungdrung Bön is eternal and without an ultimate beginning in time, it originated in the present kalpa or cycle of existence in the country of Ölmo Lungring where Tönpa Shenrab descended from the celestial spheres and took up incarnation among human beings as an Iranian prince. The mysterious land of Ölmo Lungring (`ol-mo lung-rings) or Ölmoling (`ol-mo`i gling) is said to be part of a larger geographical region to the northwest of Tibet called Tazig (stag-gzig, var. rtag-gzigs), which scholars identify with Iran or, more properly, Central Asia where in ancient times Iranian languages such as Avestan and later Sogdian were spoken.".....http://bonchildren.tonkoblako-9.net/en/jewel2/03.tan 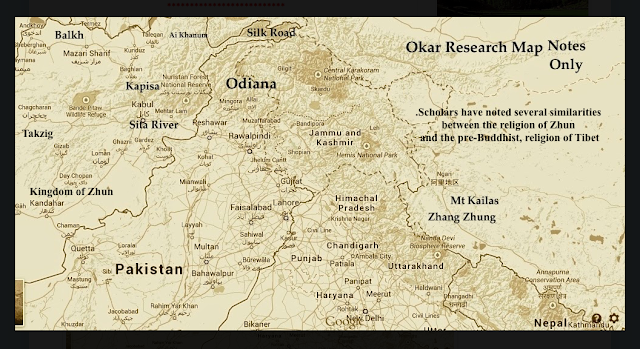 "Zunbil, also written as Zhunbil, was a dynasty south of the Hindu Kush in present southern Afghanistan region. They ruled from the early 7th century until the Islamic conquest of Afghanistan in 870 AD. The Zunbils are believed to be an offspring of the southern-Hephthalite rulers of Zabulistan. The dynasty was related to the Kabul Shahis of the northeast in Kabul. "It follows from Huei-ch'ao's report that Barhatakin had two sons: one who ruled from after him in Kapisa-Gandhara and another who became king of Zabul......The Zunbils worshiped the sun, which they named Zun (pronounced "zoon") from which they derived their name. Their territory included between what is now the city of Zaranj in southwestern Afghanistan and Kabulistan in the northeast, with Zamindawar and Ghazni serving as their capitals. The title Zunbil can be traced back to the Middle-Persian original Zūn-dātbar, 'Zun the Justice-giver'. The geographical name Zamindawar would also reflect this, from Middle Persian 'Zamin-i dātbar' (Land of the Justice-giver).... The shrine of Zoon (sun god) was located about three miles south of Musa Qala in Helmand, which may still be traced today. Some believe that the Sunagir temple mentioned by the famous Chinese traveler Xuanzang in 640 AD pertains to this exact house of worship.".....

"It was during the governorship in Khorasan of ʿAbdallāh b. ʿĀmer for the caliph ʿOṯmān that the Arabs first appeared in Sistān, when in 652 AD Zarang surrendered peacefully, although Bost resisted fiercely. From the base of Zarang, raids were launched eastwards into Arachosia/Roḵḵaj and Zamindāvar against the local rulers, the Zunbils, and as far as Kabul, against the Kābolšāhs. A process of gradual Islamization must have begun in Sistān, although Zoroastrianism and Christianity long persisted there, certainly into the 11th century, with the Zoroastrian fire-temple at Karkuya (Karkuy) to the north of Zarang long maintained."......http://www.iranicaonline.org/articles/sistan-ii-islamic-period 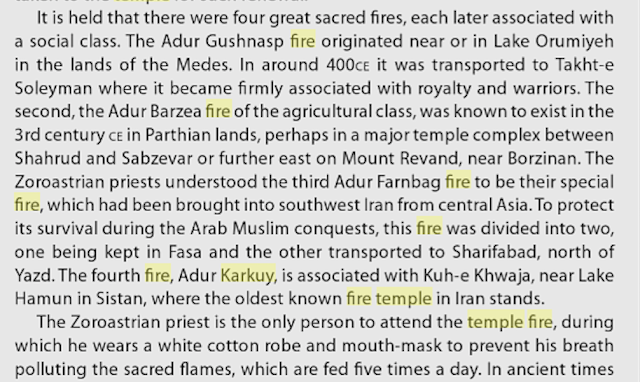 "Mount Khwaja is also an important archaeological site: On the southern promontory of the eastern slope, the ruins of a citadel complex - known as the Ghagha-Shahr - with its remains of a fire temple attest to the importance of the island in pre-Islamic Iran. According to Zoroastrian legend, Lake Hamun is the keeper of Zoroaster's seed. In Zoroastrian eschatology, when the final renovation of the world is near, maidens will enter the lake and then give birth to the saoshyans, the saviours of humankind.... the ruins are called Qal'a-e Kafaran "Fort of Infidels" or Qal'a-e Sam "Fort of Sam," the grandfather of the mythical Rostam"..... 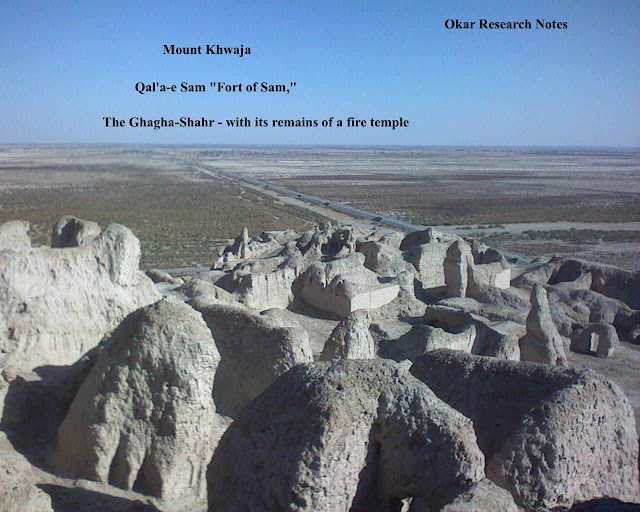