"Ahmet Karamustafa, Ph.D., associate professor of Islamic thought and Turkish literature in Arts and Sciences......his treatise on the Qalandars, a 13th-century Islamic dervish movement that also favored tambourines and psychoactive drugs, not to mention drums and naked revelry.....Among dervishes, he explains, such bizarre anti-establishment behavior was considered an intensely spiritual act of pious self-denial, an outward sign of disdain for earthly societal norms. It's an intellectual tidbit that might prove useful to anyone seeking answers to social unrest in the '60s......In his 1994 book, "God's Unruly Friends: Dervish Groups in the Islamic Later Middle Period, 1200 - 1500," Karamustafa tells of Barak Baba, who led about 100 dervishes into Syria in 1306. Baba, who made a point of thumbing his nose at authority, liked to wander around nearly naked, wearing only a red cloth around his waist and a reddish turban on his head. His turban sported buffalo horns protruding from either side......Baba's dervishes were renowned for their "immoral" ways, which included consumption of illegal foods and drugs and failure to observe the ritual Islamic fast. Like the free-spirited flower children of this century, dervishes were castigated as no-account beggars, idiots, lunatics and impostors, both by contemporary church leaders and waves of subsequent religious scholars."....http://home.earthlink.net/~drmljg/id1.html 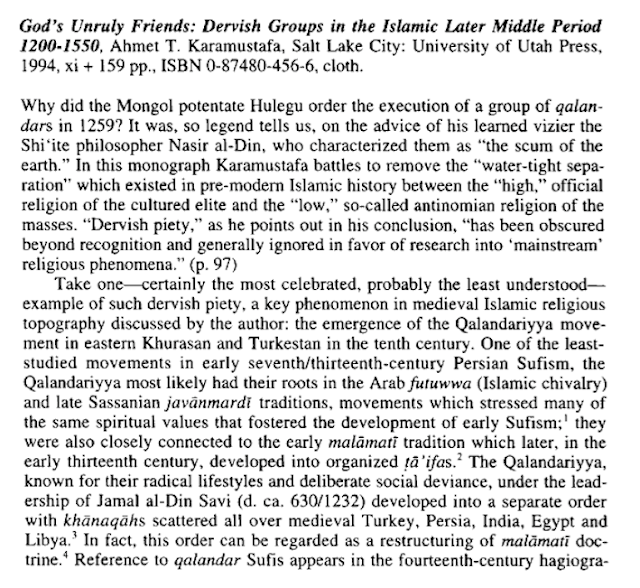 "Barāq Bābā left Sarï Saltūq and traveled to the Il-khanid court, probably because of a reverse his master’s forces had suffered. When Barāq Bābā came into the presence of Ḡāzān Khan in Tabrīz, a tiger was unleashed on him to test his occult powers; a cry from him was sufficient to halt it in its tracks. Thereafter he enjoyed the trust both of Ḡāzān and of his successor, Moḥammad Ḵodā-banda Oljāytū (Öljeytü)..... it is possible to see in Barāq Bābā an early exponent of the potent mixture of Turkic shamanism, Sufism, and ḡolāt-Shiʿism that some two centuries later brought the Safavids to power."....http://www.iranicaonline.org/

"In 1306 AD Barāq Bābā arrived in Damascus, carrying the Il-khanid banner and a letter of appointment. His outlandish appearance aroused both disgust and amusement: He was naked except for a red loincloth (fūṭa) and extremely filthy, wearing a kind of felt turban to which cowhorns were attached on his head. His companions were similarly dressed and carried with them an assortment of bones and bells, to the accompaniment of which Barāq Bābā would dance, imitating the antics of monkeys and bears....Tapdūq Emre, the preceptor of the celebrated mystical poet Yūnos Emre, were both regarded as Barāq Bābā’s successors....Qoṭb-al-ʿAlawī’s interpretation of the ecstatic utterances contained in the resāla in conformity with the classical Sufism of Iran suggests that no clear line of demarcation separated the crypto-shamanic Sufism of Barāq Bābā and his peers from its established and orthodox counterpart. Barāq Bābā is said, indeed, to have been one of those whom Ḡāzān Khan consulted concerning the life and teachings of Mawlānā Jalāl-al-Dīn Rūmī".....http://www.iranicaonline.org/ 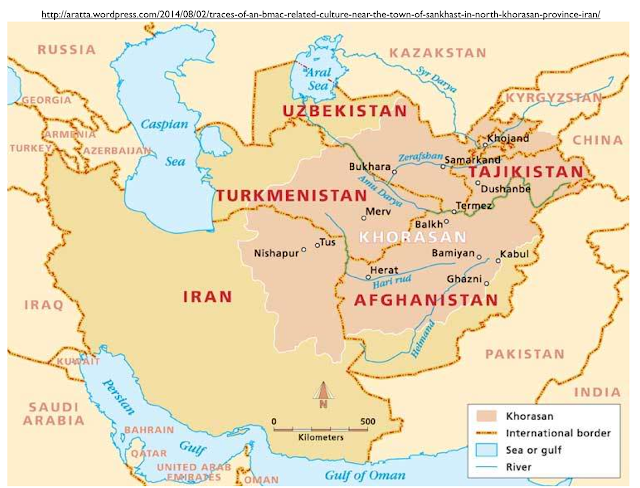 "ḠĀZĀN KHAN......(1271-1304 AD), oldest son of Arḡūn Khan and his eventual successor as the seventh Il-khanid ruler of Persia......he was appointed governor of the eastern provinces, i.e., Khorasan, Māzandarān, Qūmes and Ray..... Ḡāzān was a Buddhist who converted to Islam.....Once firmly on the throne, Ḡāzān launched a campaign against the non-Muslims in his kingdom. Particularly affected were the Buddhists, to which the Khan had belonged before his conversion to Islam. The Buddhist baḵšīs (lamas or scholars, q.v.) were given the option either to become Muslims or to leave the country. Buddhist temples were destroyed as were many churches and synagogues.....In spite of his conversion to Islam, Ḡāzān remained loyal to different aspects of Mongol tradition, most notably the yāsā, or law code attributed to Čengīz Khan." ....http://www.iranicaonline.org/

"The Ilkhanate, a khanate that formed the southwestern sector of the Mongol Empire, ruled by the Mongol House of Hulagu...The founder of the Ilkhanate dynasty was Hulagu Khan, (1218-1265 AD).....grandson of Genghis Khan....... It was founded in the 13th century and was based primarily in Iran as well as neighboring territories......Hulagu's descendants ruled Persia for the next eighty years, tolerating multiple religions, including Shamanism, Buddhism, and Christianity, and ultimately adopting Islam as a state religion in 1295......The Ilkhanate was originally based on the campaigns of Genghis Khan in the Khwarazmian Empire in 1219–24 and was founded by Hulagu Khan, a grandson of Genghis Khan. With the fragmentation of the Mongol Empire after 1259 it became a functionally separate khanate. At its greatest extent, the state expanded into territories that today comprise most of Iran, Iraq, Armenia, Azerbaijan, Georgia, Turkmenistan, Turkey, western Afghanistan, and southwestern Pakistan. Later Ilkhanate rulers, beginning with Ghazan in 1295, would convert to Islam...... 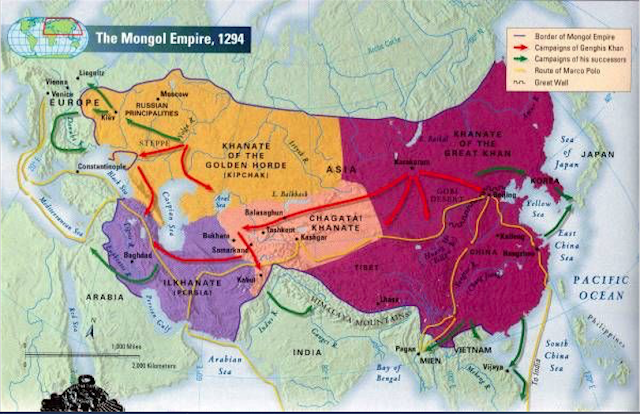 "In the period after Hulagu, the Ilkhans increasingly adopted Tibetan Buddhism. Christian powers were encouraged by what appeared to be an inclination towards Nestorian Christianity by Ilkhanate rulers, but this was probably nothing more than the Mongols' traditional even-handedness towards competing religions. The Ilkhans were thus markedly out of step with the Muslim majority they ruled. Ghazan, shortly before he overthrew Baydu, converted to Islam, and his official favoring of Islam as a state religion coincided with a marked attempt to bring the regime closer to the non-Mongol majority of the regions they ruled. Christian and Jewish subjects lost their equal status with Muslims and again had to pay the poll tax. Buddhists had the starker choice of conversion or expulsion.".....

"In Sufism, teachers of ‘crazy wisdom’ are termed ‘Malamati’ or followers of the ‘Path of Blame.’ They may find it necessary in their teaching function to incur feelings of opposition in others, in order to challenge fixed ideas and assumptions......Individuals who follow the ‘Malamati’ approach do not worry about appearances, image or the impression made on others. They incur reproach, take no care of their repute, and simplydo and say what they consider right.".....http://www.lightwinnipeg.org/Crazy%20Wisdom.pdf

"The Qalandariyyah (Qalandaris or Kalandars)..... are wandering Sufi dervishes. The term covers a variety of sects, not centrally organized.......Starting in the early 12th century, the movement gained popularity in Greater Khorasan and neighbouring regions.....Particular to the qalandar genre of poetry are terms that refer to gambling, games, intoxicants......The Qalandariya may have arisen from the earlier Malamatiyya and exhibited some Buddhist and Hindu influences."