"The Balkh River (aka: Balkhab) is a river in Balkh Province, Afghanistan......The river rises in the Band-e Amir lakes in the Hindu Kush. In its upper reaches the river is known as the Band-e Amir River (Rud-e Band-e Amir). The river flows west, then north, and terminates in irrigation canals in the area of the cities of Balkh and Mazar-e Sharif or in the desert. In times of exceptional flood the river drains into the lowlands of Turkmenistan. In ancient times the river terminated in a delta at the Amu Darya, but has not reached that river since irrigation canals were developed centuries ago......" 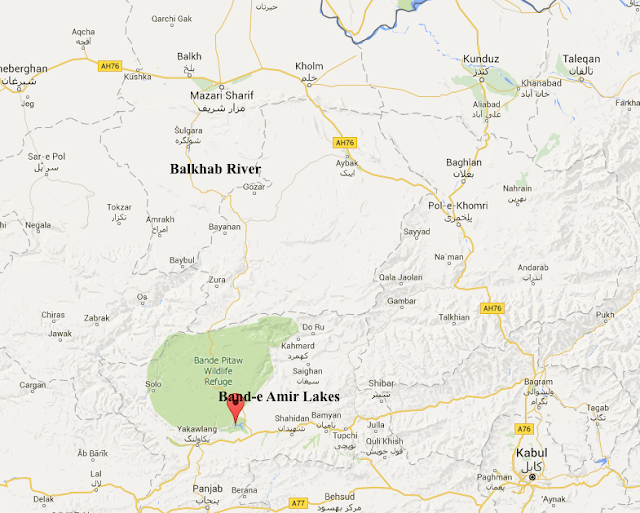 "Band-e Amir National Park is Afghanistan's first national park, located in the Bamyan Province....
Band-e Amir literally means "Commander's Dam"..It is a collection of six sapphire-blue lakes separated by natural dams made of travertine, a mineral deposit. The lakes are situated in the Hindu Kush mountains of central Afghanistan at approximately 3000 m of elevation, west of the famous Buddhas of Bamiyan......They were created by the carbon dioxide rich water oozing out of the faults and fractures to deposit calcium carbonate precipitate in the form of travertine walls that today store the water of these lakes. Band-e Amir is one of the few rare natural lakes in the world which are created by travertine systems. The site of Band-e Amir has been described as Afghanistan's Grand Canyon, and draws thousands of tourists a year......Years of conflict have taken a heavy toll on wildlife in the area. Snow leopards have vanished from the park due to hunting." 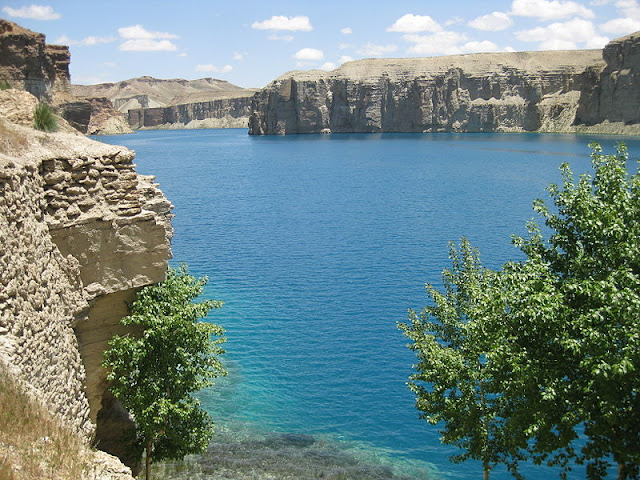 "Band-e Amir is a series of six incredibly deep blue lakes in the heart of the central Afghanistan. The lakes are situated in the foothills of the Hindu Kush, the second highest mountain range in the world, 80 kilometers from the ancient town of Bamiyan.....Surrounded by pink towering limestone cliffs almost in complete lack of vegetation, the stunning lakes seem totally out of place.
The six constituent lakes of Band-e Amir are:
Band-e Gholaman (Lake of the slaves)
Band-e Qambar (Lake of Caliph Ali's slave)
Band-e Haibat (Lake of grandiose)...the biggest and the deepest of the six, with an average depth of approximately 150 metres
Band-e Panir (Lake of cheese)
Band-e Pudina (Lake of wild mint)
Band-e Zulfiqar (Lake of the sword of Ali)
Another comparable lake is Band-e Azhdahar (The Dragon), located a few kilometres southeast of the town of Bamyan 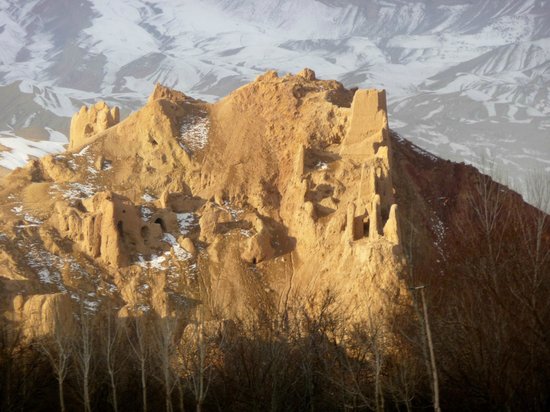 "The Red City – Share e Zohak.....Shahr-e Zohak, a 6th-century fortress built up into a 12th century city only to be destroyed by Ghengis Khan......The imposing ruins of Shahr-e Zohak guard the entrance to the Bamiyan valley, perched high on the cliffs at the confluence of the Bamiyan and Kalu rivers. Built by the Ghorids, they stand on foundations dating back to the 6th century. Genghis Khan's grandson was killed here, bringing down his murderous fury on the whole Bamiyan valley as a result. The colloquial name Zohak is taken from the legendary serpent-haired king of Persian literature.......The towers of the citadel are some of the most dramatic in Afghanistan. Made of mud-brick on stone foundations, they wrap around the side of the cliff, with geometric patterns built into their crenellations for decoration. The towers had no doors, but were accessed by ladders that the defenders pulled up behind them......Shahr-e Zohak is about 12 miles outside of Bamiyan along the road to Kabul.."......http://www.lonelyplanet.com

6th Century AD......"The Buddhas of Bamiyan were two 6th-century monumental statues of standing buddha carved into the side of a cliff in the Bamyan valley..... Built in 507 AD (smaller) and 554 AD (larger), the statues represented the classic blended style of Gandhara art......It was a Buddhist religious site from the 2nd century up to the time of the Islamic invasion in the later half of the 7th century. Until it was completely conquered by the Muslim Saffarids in the 9th century, Bamiyan shared the culture of Gandhara.....In 1221 with the advent of Genghis Khan "a terrible disaster befell Bamiyan.....The Buddhas were built under the control of the Kushan dynasty, which ruled between the late 1st century and early 3rd century ad over a kingdom incorporating Northern India, certain regions of Central Asia and areas corresponding to present-day Afghanistan and Pakistan. The Emperor Kanishka ordered the construction of the statues and some descendants of Greek artists, who went to Afghanistan with Alexander the Great, started the construction that lasted probably until the 3rd or 4th century ad. The Kushan dynasty produced the distinctive Gandhara art. Gandhara developed an artistic style blending Greco-Roman influences and Indian Buddhism......

"Balkh (/bɑːlx/; Persian/Pashto: بلخ Balkh; Bactrian: βαχλο, ẞaxlɔ) was an ancient city and centre of Buddhism, Sufism and Zoroastrianism in what is now northern Afghanistan. Today it is a small town in the province of Balkh, about 20 kilometers northwest of the provincial capital, Mazar-e Sharif, and some 74 km (46 mi) south of the Amu Darya. It was one of the major cities of Khorasan, since the latter's earliest history. Marco Polo described Balkh as a "noble and great city".......The ancient city of Balkh was known to the Ancient Greeks as Bactra, giving its name to Bactria. It was mostly known as the centre and capital of Bactria or Tokharistan. Balkh is now for the most part a mass of ruins, situated some 12 km from the right bank of the seasonally flowing Balkh River, at an elevation of about 365 m (1,200 ft).....Outside the town was a large Buddhist monastery later known as Naubahar (or Nava Vihāra in Sanskrit).......French Buddhist Alexandra David-Néel associated Shambhala with Balkh, also offering the Persian Sham-i-Bala, "elevated candle" as an etymology of its name...... In a similar vein, the Gurdjieffian J. G. Bennett published speculation that Shambalha was Shams-i-Balkh, a Bactrian sun temple."......https://en.wikipedia.org/wiki/Balkh 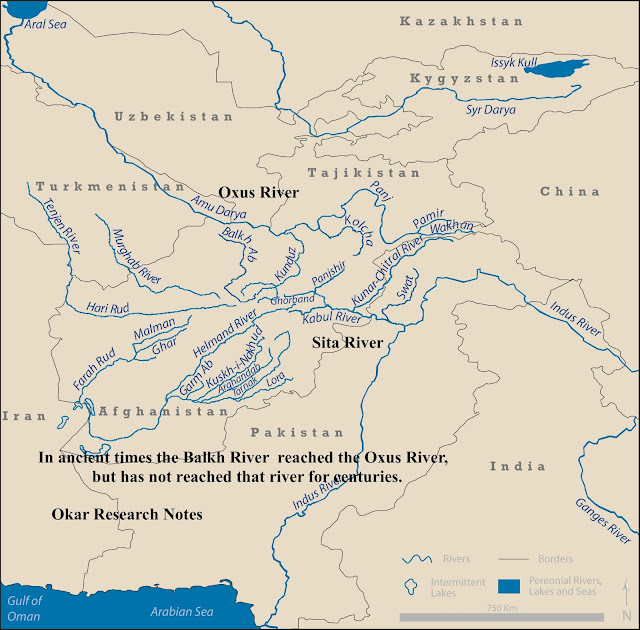 "Shulgara valley....Shulgara Valley is next to Chashma-i-Shafa and is located in Balkh, Afghanistan......Location of Bactra and Zariaspa?.....Recent research by David Adams (an experienced Australian documentary maker and photo-journalist) and his research team suggests that Bactra and Zariaspa are not synonymous with Balkh but are located further south in the Shulgara Valley in the Paraopamisus mountain range. This was presented in Episode 2 - The Mother of All Cities in his series Alexander's Lost World which was broadcast on SBS on 27 July 2014. The location proposed is backed by circumstantial evidence including consistency with contemporary accounts (the site of modern Balkh is not) and the presence of archaeological ruins which are consistent with contemporary accounts; the ruins are the subject of a recent (ongoing?) French archaelogical dig. According to Adams, contemporary Greek accounts describe Bactra and Zariaspa as twin cities and 'that the two cities lay at the foot of the Paraopamisus mountains and the Bactra river flowed past their walls'. While his theory does not currently appear to have been confirmed or refuted by the academic community, given the consistency of circumstantial evidence with contemporary accounts it appears that future research is more likely than not to confirm the theory. Research sources are available on his website however there is a once-off fee to access this extended information. Given the area is not particularly safe for outsiders, it may be some time before sufficient evidence is available to satisfy the academic community.".........https://en.wikipedia.org/wiki/Talk%3ABalkh