Charikar (Kapisa) and the Panjshir Valley

"Charikar (Persian: چاریکار‎, pronounced Chârikâr) is the main town of the Kohdaman Valley and the capital of Parwan Province in northern Afghanistan. The city lies on the road 69 km from Kabul to the northern provinces. Travelers would pass Charikar when traveling to Mazar-I-Sharif, Kunduz or Puli Khumri. Charikar is at the gateway to the Panjshir Valley, where the Shamali plains meet the foothills of the Hindu Kush. Charikar is known for its pottery and high-quality grapes....." 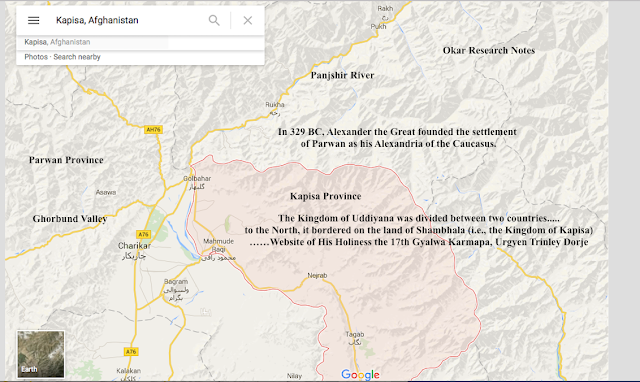 "In 329 BC, Alexander the Great founded the settlement of Parwan as his Alexandria of the Caucasus...(medieval Kapisa) .....He founded the colony at an important junction of communications in the southern foothills of the Hindu Kush mountains, in the country of the Paropamisade......In Classical times, the Hindu Kush were also designated as the "Caucasus" .......from the Scythian kroy-khasis (“ice-shining, white with snow”)." 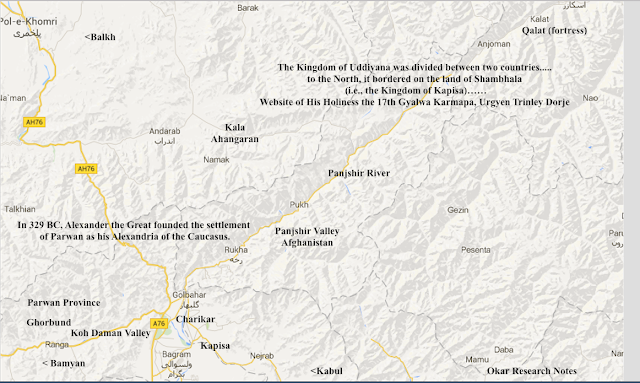 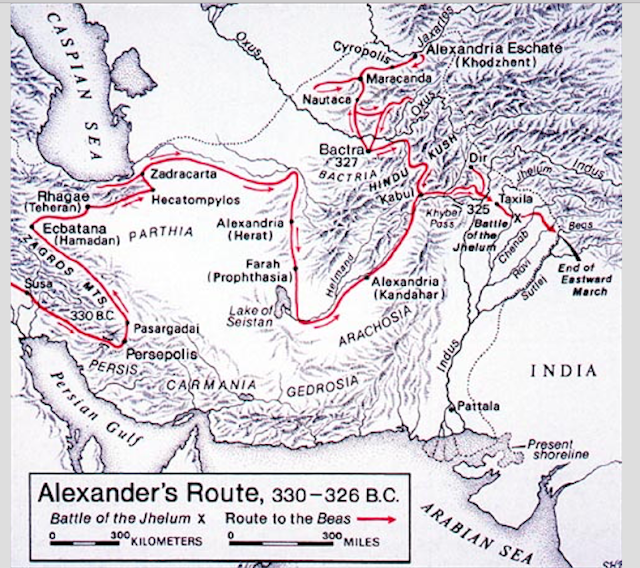 'Alexandreia under Kaukasos' was founded by Alexander the great at the foot of Paropanisos in 329 BC before he crossed into Bactria......Alexandreia was 50 miles march from Ortospanum (Kabul) ......Alexandria 'under Kaukasos' or 'of the Paropamisadai'......Location uncertain but try...the valley of the Koh-Daman, which is at the foot of great mountain....toward the northern edge of this valley lies the village of Charikar, where the three roads into Bactria diverge......in this area is a place called Opian or Houpian, where vast ruins discovered by Masson, indicate the former presence of an important town.....Alexandreia is described as 'a city in Opiane'......Houpian...Opiane.....large city in which the Vardaks resided....Hou-pi-na in Chinese)....Babar in his memirs speaks of Houpian as the name of the Pass which opens on the valley of the Ghorbund.....mentioned by Hardy as Alasadda or Alasanda.....(Hardy's Manual of Buddhism).....Alasanda was the birthplace of Menander."....Page 332.....Invasion of India-by Alexander the Great by T.W. McCrindle

"On the 5th we reached Charekar, the largest town in Koh Daman, and situated at the mouth of the Ghorbund Valley....we should reach the River Parwan the next day....Late in the evening we arrived, very weary and somewhat disheartened, at the botton of a deep dell, along which was scattered a village named Sambala......we reached a shallow ravine, on the opposite bank of which stood a tower commanding the ascent on that side....an old woman stepped forward on the edge of the ravine and stayed the hand of her highly offended countrymen....Her garments hung in tatters, and her manner and gesticulations were fierce and wild...At length here elopeence was successful, and we were permitted to move on. .....we emerged a short time after sunset, into the Parwan valley, at the village of I-angheran. Next day we reached the head of the valley... we pitched our tent at the foot of the pass (to the north-west).....a place called Sir-i-lung.......(the pass of Ghorbund, several miles to the west of Parwan?)....from the foot of the pass to the village of I-angheran the Parwan valley is a narrow, rocky defile...but after passing that village it assumes a softer character..... (Chapter XII...Page 187-193....)......"A Personal Narrative of a Journey to the Source of the River Oxus by John Wood.......https://books.google.com/books/about/A_Personal_Narrative_of_a_Journey_to_the.html?id=aiAPAAAAYAAJ

The Panjshir Valley (also spelled Panjsheer or Panjsher; Persian: درهٔ پنجشير‎ - Dare-ye Panjšēr; literally Valley of the Five Lions) is a valley in north-central Afghanistan, 150 kilometres (93 mi) north of Kabul, near the Hindu Kush mountain range. Located in the Panjshir Province it is divided by the Panjshir River.......The Shomali Plain, also called the Shomali Valley, is a plateau north of Kabul, Afghanistan. It is approximately 30 km wide and 80 km long. Once, it was an extremely fertile area, but it became a desert..... It is one of the relatively few prospering areas of Afghanistan....Shomali Plain is a plateau north of Kabul. It is approximately 30 km wide, and 80 km long.....The valley – fertile and rich with water – was once Kabul's garden: fruit and vegetables were cultivated here, and Kabul's residents picnicked here on weekends."

"Legend reports that Vasubandhu came from the "Kingdom of Shambhala' (approximately, modern Begram, otherwise known as the ancient kingdom of Kapisha, north of Kabul) located in the Afghanistan region, north-west of Peshawar....Bagram (بگرام Bagrám), founded as Alexandria on the Caucasus and known in medieval times as Kapisa, is a small town and seat in Bagram District in Parwan Province of Afghanistan, about 60 kilometers north of the capital Kabul….in the old tradition of the 84 Mahasiddhas that the Kingdom of Uddiyana was divided between two countries, to the North and South. To the North, it bordered on the land of Shambhala (i.e., the Kingdom of Kapisa)…… Website of His Holiness the 17th Gyalwa Karmapa, Urgyen Trinley Dorje……….. ….http://www.dharmafellowship.org/biographies/historicalsaints/pramodavajra.htm"….

"The Kingdom of Uddiyana was divided between two countries.....to the North, it bordered on the land of Shambhala (i.e., the Kingdom of Kapisa)"……Website of His Holiness the 17th Gyalwa Karmapa, Urgyen Trinley Dorje

"BEGRĀM, the site of ancient Kāpiśa, is located 80.5 km north of Kabul overlooking the Panjšīr valley at the confluence of the Panjšīr and Ḡorband rivers. Its ruins were known in the 19th century and yielded large quantities of coins dating between the period of the Greco-Bactrians and that of the Kushans (cf. C. Masson, “Memoir on the Ancient Coins Found at Behgram, in the Kohistan of Kabul,” JASB 3, 1834, pp. 153-75; 5, 1836, pp. 1-29, 537-47). It was not until 1922, however, that the ruins were correctly recognized by Alfred Foucher as those of the important ancient city of Kāpiśa (A. Foucher, “Le vieille route de l’Inde de Bactres à Taxila,” MDAFA 1, 1942, pp. 138-45). It has been suggested that the town was originally Alexandria-­under-Caucasus, founded by Alexander the Great (cf. W. W. Tam, The Greeks in Bactria and India, 2nd ed., Cambridge, 1951, pp. 96ff., 460-62; H. Deydier, Contribution à l’étude de l’art du Gandhāra, Paris, 1950, pp. 94-97); but there can be no doubt that it was inhabited by the Indo-Greeks, since a coin reverse of Eukratides shows an enthroned deity between an elephant protome and a mountain symbol with the Kharoshthi inscription Kavisiye nagaradevata, i.e., “city god of Kāpiśa” (cf. A. K. Narain, The Indo-Greeks, Oxford, 1957, pp. 63­-64). According to the account of Hsüan-tsang, the city was the summer capital of the Kushan empire under Kanishka (cf. S. Beal, Buddhist Records of the Western World I, London, 1884, pp. 54-58).".....http://www.iranicaonline.org/articles/begram-the-site-of-ancient-kapisa-is-located-80

Ahingaran....Wood mentions the village of I-anghera at the South end of the Parwan and Punjheer valleys.........A Journey to the Source of the River Oxus.....By John Wood