Darius the Great and the Kabul River (515 BC) 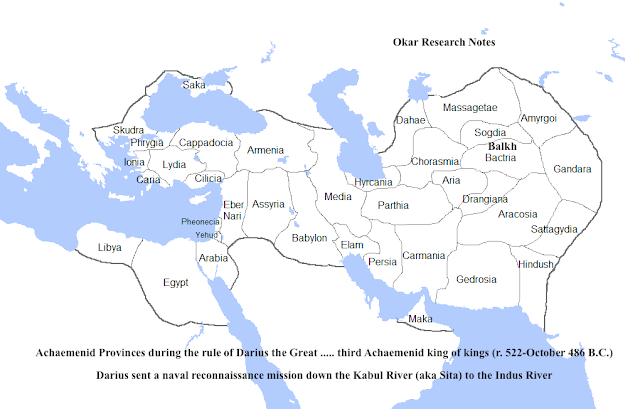 Achaemenid Provinces during the rule of Darius the Great ..... third Achaemenid king of kings (r. 522-October 486 B.C.)......Darius sent a naval reconnaissance mission down the Kabul river (aka Sita) to the Indus.....http://www.iranicaonline.org/articles/darius-iii

"Darius I (c. 550–486 BCE) was the third king of the Persian Achaemenid Empire. Also called Darius the Great, he ruled the empire at its peak, when it included much of West Asia, the Caucasus, parts of the Balkans (Thrace-Macedonia and Paeonia), most of the Black Sea coastal regions, parts of the North Caucasus, Central Asia, as far as the Indus Valley in the far east, and portions of north and northeast Africa including Egypt (Mudrâya), eastern Libya and coastal Sudan."

"Darius himself marched against “the rebellious Scythians” of Central Asia, who threatened the northern and eastern flanks of the empire; he crossed the Caspian Sea, defeated the group known as the Pointed-Hat Scythians (Sakā tigraxaudā), captured their “king,” Skunxa, and installed a loyal leader in his stead (DB 5.20-33; for detailed commentary, see Shahbazi, 1982, pp. 189-96). On his return he added the image of Skunxa and an account of the Elamite and Scythian campaigns to the reliefs at Bīsotūn. In autumn 517 he traveled to Egypt and succeeded in pacifying the rebellious Egyptians by showing respect for their religion and past glory and by ordering the codification of their laws; in turn he received their obeisance and reverence (Polyaenus, Strategemata 7.11.7; Diodorus, 1.95.4-5; for details, see Bresciani, pp. 507-09; Ray, pp. 262-64). After he returned to Persia Darius executed Intaphernes for treason (Herodotus, 3.118-19) and sent a naval reconnaissance mission down the Kabul river to the Indus; it explored the eastern borderlands, Sind, the Indian Ocean, and the Red Sea and arrived in Egypt near modern Suez thirty months later (Hinz, 1976, p. 198; Bivar, CAH2, pp. 202-04). Following this expedition “Darius conquered the Indians [of Sind], and made use of the sea in those parts” (Herodotus, 4.44)."......http://www.iranicaonline.org/articles/darius-iii

"The Father of History, Herodotus of Halicarnassus refers to Scylax and his expedition in book 4, section 44........The greater part of Asia the greater part was explored by [the Persian king] Darius, who desired to know more about the river Indus, which is one of the two rivers in the world to produce crocodiles. He wanted to know where this river runs out into the sea, and sent with his ships [...] Scylax, a man of Caryanda.......They started from the city of Caspatyrus in the land of Pactyïke, sailed down the river towards the east and to the sea. Sailing westwards over the sea, they came in the thirtieth month to the place from whence the king of the Egyptians had sent out the Phoenicians of whom I spoke before [text], to sail round Africa.......Pactyïke was a part of ancient Gandara (eastern Afghanistan) and Caspatyrus, which is not mentioned in other sources, has to be somewhere along the river Kabul. Since Herodotus tells us in the next line that Scylax' expedition was a preliminary to Darius' conquest of the Indus valley, we can date this voyage after 519 -when Darius' rule was secure- and before 512, when India seems to have been part of the Persian empire......Scylax' voyage led him along the Indus, along the shores of the Indian ocean and those of the Persian gulf. We do not know the details of this expedition, but we have a later source, the Indikê by Arrian of Nicomedia, which contains an excerpt of the story of Nearchus, the admiral of Alexander the Great. He made the same voyage and mentions the tides, whales and the hard living conditions along the Gedrosian coast.".......http://www.livius.org/articles/person/scylax-of-caryanda/

"Western India was part of the Persian Empire during the reign of Darius the First, so almost certainly the answer is yes. He tried to develop the commerce of the empire, and sent an expedition down the Kabul and the Indus, led by the Carian captain Scylax of Caryanda, who explored the Indian Ocean from the mouth of the Indus to Suez.".....http://www.newworldencyclopedia.org/entry/Darius_I_of_Persia#The_empire_under_Darius

"Kabul River aka: Sita River..........In 672 an Arab governor of Sistan, Abbad ibn Ziyad, raided the frontier of Al-Hind and crossed the desert to Gandhara, but quickly retreated again. The marauder Obaidallah crossed the Sita River and made a raid on Kabul in 698 only to meet with defeat and humiliation. Vincent Smith, in Early History of India, states that the Turkishahiya dynasty continued to rule over Kabul and Gandhara up until the advent of the Saffarids in the ninth century. Forced by the inevitable advance of Islam on the west, they then moved their capital from Kapisa to Wahund on the Indus, whence they contin­ued as the Hindushahiya dynasty. This was in 870 A.D. and marks the first time that the Kingdom of Shambhala actually came under Moslem domination. The Hindushahis recaptured Kabul and the rest of their Kingdom after the death of the conqueror Yaqub but never again maintained Kapisa as their capital."......http://www.dharmafellowship.org/biographies/historicalsaints/lord-padmasambhava.htm#eightcentury 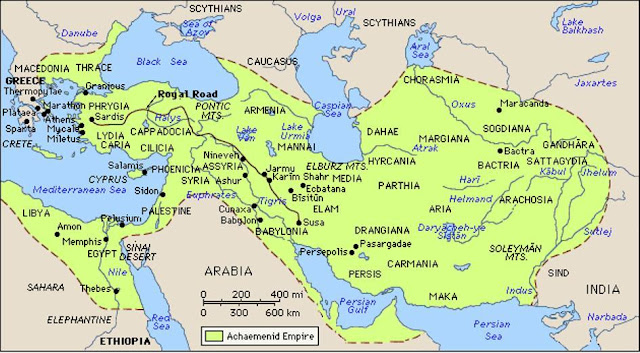 "After he returned to Persia Darius executed Intaphernes for treason (Herodotus, 3.118-19) and sent a naval reconnaissance mission down the Kabul river to the Indus; it explored the eastern borderlands, Sind, the Indian Ocean, and the Red Sea and arrived in Egypt near modern Suez thirty months later (Hinz, 1976, p. 198; Bivar, CAH2, pp. 202-04). Following this expedition "Darius conquered the Indians [of Sind], and made use of the sea in those parts" (Herodotus, 4.44).".......http://www.cais-soas.com/CAIS/History/hakhamaneshian/darius_great.htm

"The Achaemenian records and Herodotus suggest that Massagetae and Haumavarga were one and the same and they inhabited the present-day region east of the Caspian Sea and west of the Aral Sea. This area that presently is watered by Gorganrud and Atrak in the south and the Oxus and Jaxartes in the north had a different look in the views of the ancient geographers. The Oxus and Jaxartes were deemed to empty into the Caspian Sea, thereby creating a milieu consisting of plains intersected by various rivers closer to the Iranian heartland.".....Atlas of Ancient and Classical Geography (London: J.M. Dent & Sons, 1950), pp. 2-5.....http://www.romanianhistoryandculture.com/dariusiinthracia.htm

"Scylax of Caryanda was a renowned Greek explorer and writer of the late 6th and early 5th centuries BC. His own writings are lost, though occasionally cited or quoted by later Greek and Roman authors...In about 515 BCE, Scylax was sent by King Darius I of Persia to follow the course of the Indus River and discover where it led.....Scylax and his companions set out from the city of Caspatyrus in Gandhara (which would mean he entered the Indus close to its confluence with the Kabul River, near to what is now Peshawar in Pakistan). Scylax sailed down the river until he found it reached the sea. He then sailed west across the Indian Ocean until he arrived at the Red Sea, which he also explored. He travelled as far as the Red Sea's western end at Suez, before returning to report to Darius I. His entire journey took thirty months.. ".....Lendering, Jona "Scylax of Caryanda".

"Skylaks of Karyanda (Greek: Σκύλαξ; Latin and English: Scylax) was a famous explorer and writer from Karyanda in Karia in the late 500's and early 400 BC His own writings have been lost, but has been occasionally quoted or mentioned by later Greek and Roman writers. He was in the Persian service, sailed down Kabul, made ​​a reconnaissance along the coast of the Indian Ocean until the Red Sea of 13 months around the time 515 BC ......The periplous ("Circumnavigation") which is preserved under his name, however, is not of him, but one geographic study (rather than a travel description) which was written early in 330 BC by an unknown author who worked in or by Aristotle 'peripatetic school in Athens. This work is known as the Periplus of Pseudo-Skylaks. "......https://no.wikipedia.org/wiki/Skylaks

"The Kabul River (Persian/Urdu: دریای کابل‎; Pashto: کابل سیند‎, Sanskrit: कुभा ), the classical Cophes /ˈkoʊfiːz/, is a 700-kilometre (430 mi) long river that starts in the Sanglakh Range of the Hindu Kush mountains in Afghanistan and ends in the Indus River near Attock, Pakistan. It is the main river in eastern Afghanistan and is separated from the watershed of the Helmand by the Unai Pass. The Kabul River passes through the cities of Kabul and Jalalabad in Afghanistan before flowing into Khyber Pakhtunkhwa in Pakistan some 25 kilometres (16 mi) north of the Durand Line border crossing at Torkham. The major tributaries of the Kabul River are the Logar, Panjshir, Kunar, Alingar, Bara and Swat rivers.....The Kabul River is little more than a trickle for most of the year, but swells in summer due to melting snows in the Hindu Kush Range. Its largest tributary is the Kunar River, which starts out as the Mastuj River, flowing from the Chiantar glacier in Chitral, Pakistan and after flowing south into Afghanistan it is met by the Bashgal river flowing from Nurestan. The Kunar meets the Kabul near Jalalabad. In spite of the Kunar carrying more water than the Kabul, the river continues as the Kabul River after this confluence, mainly for the political and historical significance of the name."

"John Wood (1812 – 14 November 1871) was a Scottish naval officer, surveyor, cartographer and explorer, principally remembered for his exploration of central Asia.....Many of the maps of southern Asia which he compiled remained standard for the rest of the 19th century......In 1835, aged twenty-two, he commanded the first steamboat to paddle up the Indus River and surveyed the river as he went. Four years later, he led an expedition that found one of the River Oxus' sources in central Asia. The Royal Geographical Society recognised his work by awarding him their Patron's Medal in 1841.....John Wood..... A Narrative of a Journey to the Source of the River Oxus, London: John Murray, 1841. 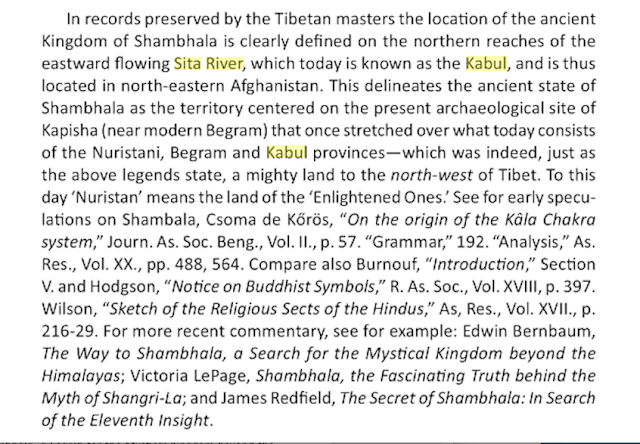 "The Choaspes (also called Zuastus and Guræus) is a river that rises in the ancient Paropamise range (now the Hindu Kush in Afghanistan), eventually falling into the Indus river near its confluence with the Cophes river (which is usually identified with the Kabul river).......The Kabul River (Persian/Urdu: دریای کابل‎; Pashto: کابل سیند‎, Sanskrit: कुभा ), the classical Cophes /ˈkoʊfiːz/, is a 700-kilometre (430 mi) long river that emerges in the Sanglakh Range of the Hindu Kush mountains in Afghanistan and empties into the Indus River near Attock, Pakistan."