"French Buddhist Alexandra David-Néel associated Shambhala with Balkh, also offering the Persian Sham-i-Bala, "elevated candle" as an etymology of its name. In a similar vein, the Gurdjieffian J. G. Bennett published speculation that Shambalha was Shams-i-Balkh, a Bactrian sun temple.".....https://en.wikipedia.org/wiki/Balkh 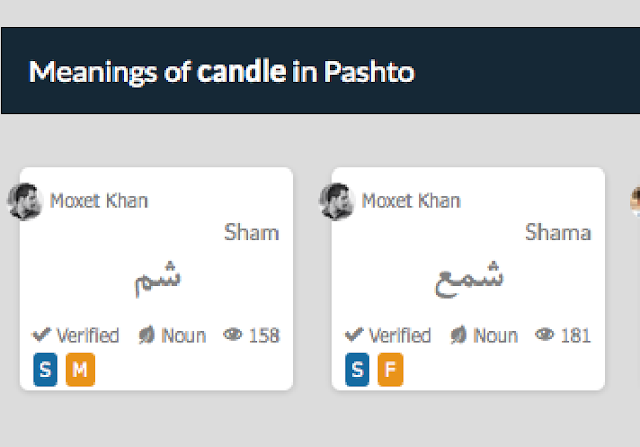 "Pashto first appeared in writing during the 16th century in the form of an account of Shekh Mali's (King Sardar Sheikh Milli ) Conquest of Swat. It is written with a version of the Arabic script. There are two standard written forms: one based on the dialect of Kandahar, the other on the dialect of Peshawar.......The name Pashto is thought to derive from the reconstructed proto-Iranian form, parsawā 'Persian language. In northen Afghanistan speakers of Pashto are called Pakhtūn; in sourthen Afghanistan they are known as Pashtūn, and as Pathān or Afghan in Pakistan. "......http://www.omniglot.com/writing/pashto.htm 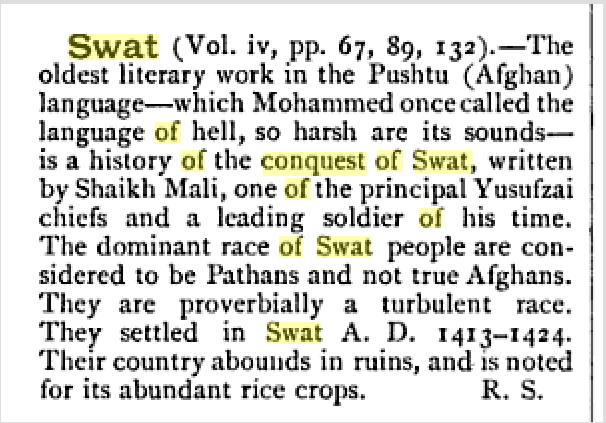 "The Pashtun, or Pushtun, are a race of warriors who live primarily in Afghanistan and Pakistan. They consist of about sixty tribes, each with its own territory. Although their origin is unclear, their legends say that they are the descendants of Afghana, grandson of King Saul. However, most believe they probably arose from ancient Aryans intermingling with subsequent invaders.".... http://joshuaproject.net/people_groups/14256/AF

"The peaks of the Safed Koh, between Jalabad and Kabu, bear the names of Sita, Ram, etc....."

"The vast majority of Pashtuns are found in the traditional Pashtun homeland, located in an area south of the Amu Darya in Afghanistan and west of the Indus River in Pakistan, which includes Khyber-Pakhtunkhwa, Federally Administered Tribal Areas (FATA) and part of Balochistan. Additional Pashtun communities are located in western and northern Afghanistan, the Gilgit–Baltistan and Kashmir regions and northwestern Punjab province of Pakistan. Throughout the Indian subcontinent, they are often referred to as Pathans." 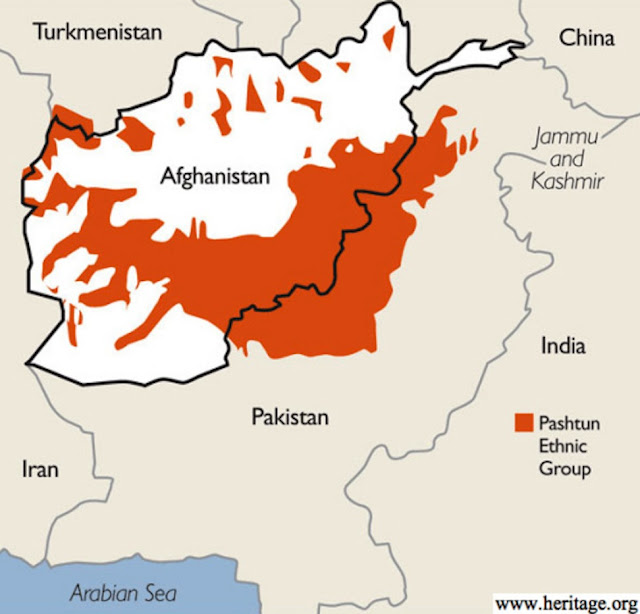 "The three last-named clans are branches of the Yusufzais) Sheikh Mali, who acted as assistant and Counselor of Malik Ahmed, was a wise and learned man. The Yusufzais having completed their plan of settlement in a land of their choice, elected Malik Ahmed their sovereign chief and Sheikh Mali his Vazir. It was an organization within the tribe. Sheikh Mali, who was a revenue expert, wrote a book in Pashto on distribution of land, known as ‘Wesh’ among Pathans. The book not only set forth in detail the rules and regulations of ‘Wesh’ system and was used as a guide by the Yusufzais, but is also a valuable manuscript of Pashto literature in the fifteenth century. The great thinker and poet of Pashto, Khushal Khan Khattak, mentions Sheikh Mali with respect in his ‘Swat Nama’. Though the system of land distribution as introduced by Sheikh Mali was not very useful on the whole, it rather hampered the productivity of land and permanent settlement, it was nevertheless a system perfectly suitable to the political vicissitudes of the times and one upon which all the Yusufzais agreed. In Swat the system was in force as late as the twentieth century. After Malik Ahmed, Khan Kajju and Ali Asghar were two other brave and famous chiefs of the Yusufzais Zahir-ud-Din Babur usurped the throne of Kabul after the death of Ulugh Beg. Being ambitious, he soon out to conquer India as well. Partly owing to the instigation of the Dilazaks and partly believing Yusufzais to be naturally opposed to the Mughals, he thought it expedient to crush them before going any further. He, therefore, assumed the aggressive against them. Thousands of innocent men and women were ruthlessly slain, miles of cultivated fields were trampled and scores of villages were burnt to ashes. By now a monster of rage and vengeance, Babur struck camp at ‘Qatlang’ near Mardan and planned ways and means of totally eradicating the Yusufzai tribe. In the meantime a jirga of the chiefs of Yusufzais waited on him and pleaded for mercy. Babur himself appreciated the advantages of establishing amicable terms with them. He reached an agreement with the Yusufzai chiefs, ‘whom he rewarded with robes and presents. A nominal tribute of rupees one thousand was levied on them. To assure them of his good intentions he married the daughter of Shah Mansur, an important chief of the Yusufzais. He had to fight against the Sultan of India, Ibrahim Lodhi, and the successful attempt at winning the friendship of a powerful Pathan tribe was a clever move which greatly strengthened his hands.".......https://www.reddit.com/r/Swatvalley/comments/2atzgt/history_of_swat/

"Paṧtō is an Iranic language spoken in south and southeastern Afghanistan, by recent settlers in northern Afghanistan, in Pakistan (North-West Frontier Province and Baluchistan), and on the eastern border of Iran..... Indo-Aryan Paṭhān must have been adopted from Paṧtō *Paṧtan-.......Paҳt’o denotes not only the Paštūn language, but also the national code of honor: Paҳtūn haγa na daγ či Paҳto wāyi, lekin haγa či Paҳto ləri “a Paṧtūn is not he who (only) speaks Paṧtō, but he who has Paṧtō. ” This expression symbolizes the strong feeling of Paṧtun national unity—unique among Iranic ethnic groups—in spite of the numerous tribes, subtribes, clans, and continuous inter-tribal fighting......http://www.iranicaonline.org/articles/afghanistan-vi-pasto

"There are two major dialects of Pashto: Western Pashto spoken in Afghanistan and in the capital, Kabul, and Eastern Pashto spoken in northeastern Pakistan. Most speakers of Pashto speak these two dialects. Two other dialects are also distinguished: Southern Pashto, spoken in Baluchistan (western Pakistan and eastern Iran) and in Kandahar, Afghanistan......Pushto has been written in a variant of the Persian script (which in turn is a variant of Arabic script) since the late sixteenth century......The first written records of Pushto are believed to date from the sixteenth century and consist of an account of Shekh Mali's conquest of Swat......Traces of the history of Pushto are present in its vocabulary. While the majority of words can be traced to Pushto's roots as member of the Eastern Iranian language branch, it has also borrowed words from adjacent languages for over two thousand years. The oldest borrowed words are from Greek, and date from the Greek occupation of Bactria in third century BC. There are also a few traces of contact with Zoroastrians and Buddhists. Starting in the Islamic period, Pushto borrowed many words from Arabic and Persian. Due to its close geographic proximity to languages of the Indian sub-continent, Pushto has borrowed words from Indian languages for centuries.".....http://www.afghan-network.net/Ethnic-Groups/pashtu-history.html

"Not only the Pathans, but also the Afghan Royal Family has a very well known tradition placing its origin in ancient Israel, they came from the Tribe of Benjamin.......This tradition was first published in 1635 in a book called Mahsan-I-Afghani and has often been mentioned in the research literature. According to this tradition, King Saul had a son called Jeremiah who had a son called Afghana. Jeremiah died at about the time of King Saul's death and Afghana was raised by King David and remained in the royal court during King Solomon's reign.......About 400 years later in the time of disorder of Israel, the Afghana family fled to a land called Gur which is in central Afghanistan. They settled and traded with the people of the area and in the year 662, with the arrival of Islam, the sons of Israel in Gur converted to the prophet with 7 representatives of the Afghan. The leader of the sons of Israel was Kish like the name of Saul's father. "......http://www.moshiach.com/tribes/afghanistan.html