"The Gilgit Manuscript contains the texts on Vinay Vastu, the treatise on monastic discipline. There are texts on Ayurvedic medicines like Anna Panna Vidhi and Bhaisajya Guru Sutra. There are references to iconometry, folk tales, philosophy and culinary skills. It also has a chronological list of the various Buddhist Shahi kings of Gilgit."........http://www.the-south-asian.com/Aug2004/Gilgit_manuscript.htm 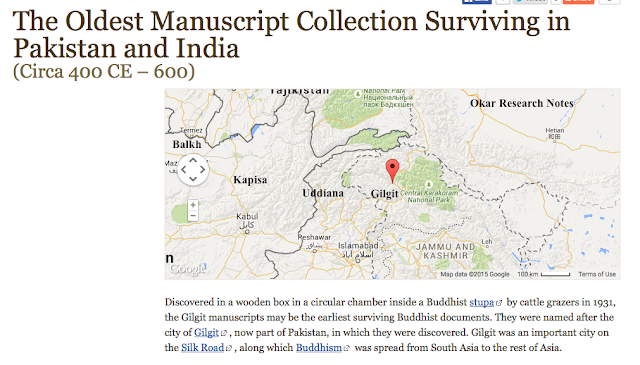 "Opinions vary about the date of this manuscript. One branch of scholars says it was written in the second century AD., while another puts the date at somewhere between the sixth and seventh centuries. .....the Gilgit Manuscript has references of the three Buddhist Synods [meeting of religious heads]. This suggests a date sometime around or after the time of Emperor Kanishka. According to the Sanskrit texts, the third Synod was held during Kanishka's reign".............http://www.the-south-asian.com/Aug2004/Gilgit_manuscript.htm 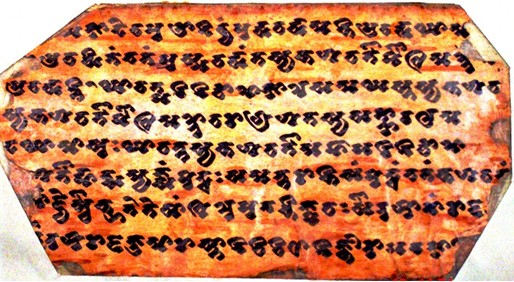 "Discovered in a wooden box in a circular chamber inside a Buddhist stupa by cattle grazers in 1931, the Gilgit manuscripts may be the earliest surviving Buddhist documents. They were named after the city of Gilgit......including the famous Lotus Sutra, the manuscripts survived because they were written on the bark of the bhoj (birch) tree which does not decay, and were kept in the freezing sub-zero temperatures of the Gilgit region. They were were written the Buddhist form of Sanskrit in the Śāradā or Sharada script.....In August 1938, seven years after the discovery of the texts, the archaeologist Madhusudan Kaul Shastri led a systematic excavation of the Naupur site and discovered another larger chamber at the base of the structure. The chamber contained another set of the Gilgit Manuscripts.....inscriptions on these bronzes “reveal that they were produced and dedicated due to the generosity and the religious zeal of a Patola Shahi”. The Patola Shahis, also known as Palola Shahis, were the rulers of Gilgit and Baltistan from the late sixth to the early eighth centuries AD......These are the oldest surviving collection of religious texts in the subcontinent. Based on the paleographical evidence, scholars agree that local Buddhist devotees compiled these texts between the fifth and sixth century AD. With the exception of only a few scripts, all the manuscripts were written on birch bark in Buddhist hybrid Sanskrit language in the Gupta Brahmi and post-Gupta Brahmi script.....The Gilgit Manuscripts deciphered thus far cover a wide range of subjects such as religion, religious rituals, philosophy, iconometry, monastic discipline, folk tales, medicine and culinary art....."....http://www.historyofinformation.com/expanded.php?id=4678

"The Gilgit Manuscript...an important historical link......The almost seventeen centuries old Gilgit Manuscript has been giving historians a hard time, as no one has yet been able to fully decipher it. The lamination of the manuscript by the National Archives of India sometime ago has once again put the limelight back on this all-important literature concerning India, Tibet, China, Japan and other neighbouring countries....... in 1897 - 34 years before it was discovered - the Buddhist Text Society of Calcutta had published references to the Gilgit Manuscript saying that if it were ever to be found it would unravel the ancient history of several communities as it is considered to be the oldest Buddhist manuscript......The story began some sixty years ago when a group of cattle grazers unearthed a box in the region of Gilgit [now part of Pakistan occupied Kashmir] in the then undivided Jammu & Kashmir state. Little did they realize that the box contained one of the world's oldest manuscripts which could hold the key to the exact evolution of Sanskrit, Buddhist, Chinese, Korean, Japanese and Tibetan literatures. Gilgit was then the major trade centre on the Silk Route.....Leading Buddhist scholars from all parts of the world also rushed to Gilgit to unravel the mysteries locked up in the box."....... http://www.the-south-asian.com/aug2004/Gilgit_manuscript.htm

"Originally written in Pali text, the Gilgit Manuscript contains four sutras, with each leaf between ten and twelve feet in length and five feet in width. The main scripture is the Lotus Sutra which even today is an important scripture in Japan and deeply influences the cultural and political life of the country. Several researchers and scholars have attempted to transcribe the text but till date the manuscript has not been deciphered in its entirety. ...... Regarding the dialectical peculiarities of the text, Dutt says that though the language of the prose portion is Sanskrit it bristles with Buddhist religious and philosophical terms and uses Prakrit language quite liberally......Prof. Dutt also suggests that the text's versified portion is extremely confusing as it disregards the elementary canons of grammar, meter, and even vocabulary. A sweet melody seems to be its chief aim and for this it sacrifices every essential condition of a language. It doesn't use convenient forms of verbs or singulars or plurals or masculine or feminine genders - all of which makes Prof. Dutt suspect that the author of the original text was a versatile linguist and could play around with languages and blend them together."..... ..... http://www.the-south-asian.com/aug2004/Gilgit_manuscript.htm 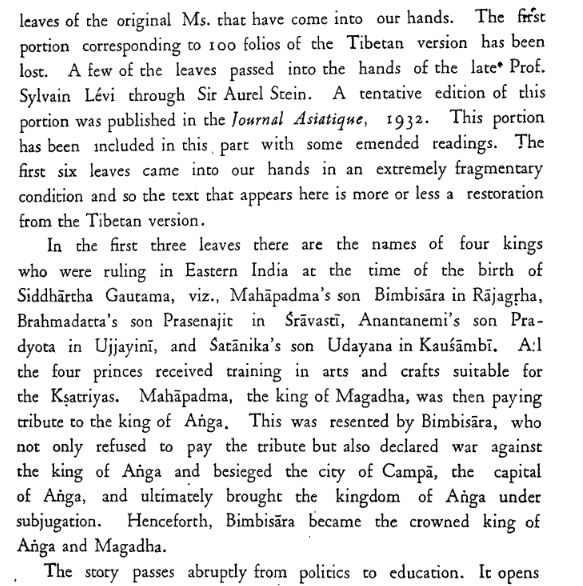 "Kanishka I (Sanskrit: कनिष्क; Bactrian: Κανηϸκι, Kaneshki; Middle Chinese: 迦腻色伽 (Ka-ni-sak-ka > New Chinese: Jianisejia)), or Kanishka the Great, was the emperor of the Kushan dynasty in 127–151 famous for his military, political, and spiritual achievements. A descendant of Kushan empire founder Kujula Kadphises, Kanishka came to rule an empire in Bactria extending from Turfan in the Tarim Basin to Pataliputra on the Gangetic plain during the Golden Age of the Kushanas. The main capital of his empire was located at Puruṣapura in Gandhara (Peshawar in present Khyber Pakhtunkhwa, Pakistan), with two other major capitals at ancient Kapisa (present Bagram, Afghanistan) and Mathura, India. His conquests and patronage of Buddhism played an important role in the development of the Silk Road, and the transmission of Mahayana Buddhism from Gandhara across the Karakoram range to China."

"Kanishka was a Kushan of probable Yuezhi ethnicity. He used an Eastern Iranian, Indo-European language known as Bactrian (called "αρια," i. e. "Aryan" in the Rabatak inscription), which appears in Greek script in his inscriptions, though it is not certain what language the Kushans originally spoke; possibly some form of Tocharian – a "centum" Indo-European language. The "Aryan" language of the inscription was a "satem" language of the Middle Iranian period, possibly the one spoken in "Arya" or "Ariana" (the region around modern Afghanistan) and was, therefore, quite possibly unrelated to the original language of the Kushans (or the Yuezhi), but adopted by them to facilitate communication with local people." 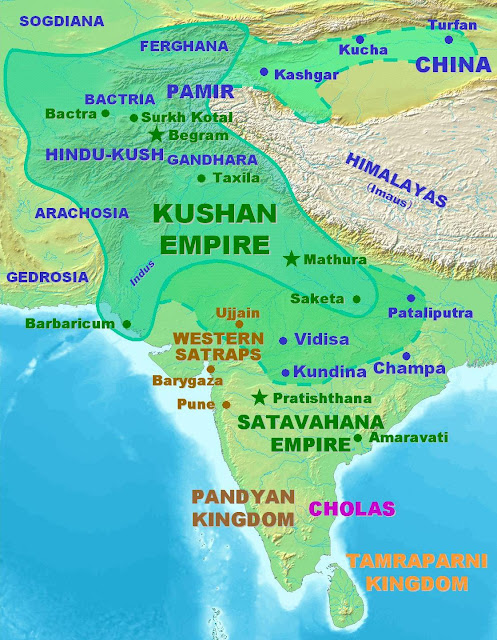 Territories of the Kushans under Kaniska according to the Rabatak inscription.