"In the 6th–8th C. AD, the Patola (Palola) Shahis ruled the country of Bolor, in what today is Northern Pakistan. (Balawaristan (Urdu:بلاورستان) is an historical name of Gilgit-Baltistan that has regained some prevalence in recent years. The archaic English spelling for the name was Boloristan).....There are a number of Buddhist artworks and texts that can be attributed through inscriptions to this royal family. Although the dynasty's visual record is clearly Buddhist, no comprehensive art historical scholarship has been conducted on it .........The Patola Shahi Dynasty: A Buddhological Study of their Patronage, Devotion and Politics by Rebecca L. Twist 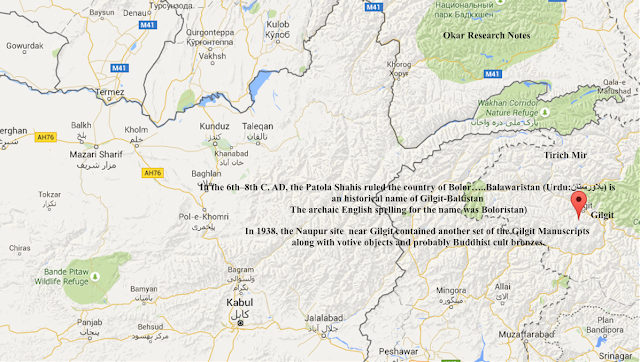 "The people of this region have historically been referred to as Balawars (or highlanders), which is said to have come from the term BALA, which means high......An alternative theory links the name to a 'mythic' ancient king called Bolor Shah, who had first united the region and from whom local rulers in turn often claimed descent. Yet a third theory was proposed by the National Institute of Historical and Cultural Research of Pakistan that "the name is most probably derived from the title Patola, the Buddhist royal dynasty which was powerful in the region from to 8th centuries AD." 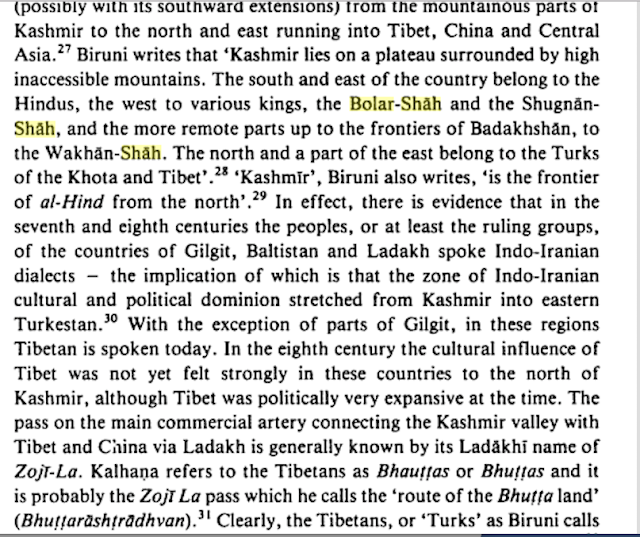 "The most famous of the Gilgit manuscripts, the Gilgit Lotus Sutra is preserved in the National Archives of India in Delhi. Known as the Saddharma Pundarika Sutra – or the teachings of the white lotus and sun – the sutra is the basis of the Tiantai and Nichiren schools of Buddhism.....In August 1938, seven years after the discovery of the texts, the archaeologist Madhusudan Kaul Shastri led a systematic excavation of the Naupur site near Gilgit and discovered another larger chamber at the base of the structure. The chamber contained another set of the Gilgit Manuscripts along with votive objects and probably Buddhist cult bronzes......According to renowned scholar Karl Jettmar, inscriptions on these bronzes “reveal that they were produced and dedicated due to the generosity and the religious zeal of a Patola Shahi”. The Patola Shahis, also known as Palola Shahis, were the rulers of Gilgit and Baltistan from the late sixth to the early eighth centuries AD."....... Jeremy Norman ....http://www.historyofinformation.com.....The Oldest Manuscript Collection Surviving in Pakistan and India (Circa 400 CE – 600) 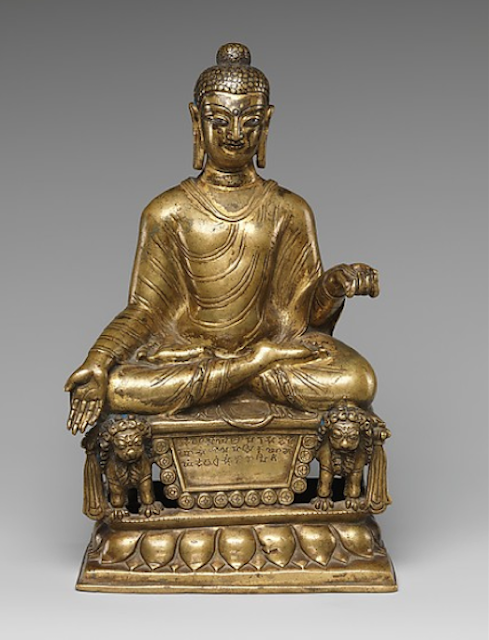 "Enthroned Buddha Granting Boon (Merit).....Period: Patola Shahi period.....Date: dated by inscription to ca. 600....Culture: Pakistan (Gilgit Kingdom)....This Buddha is one of the three earliest datable sculptures associated with the kingdom of Gilgit in northern Pakistan. All were commissioned by Queen Mangalahamsika, known from Gilgit manuscripts to have been the senior queen to King Vajraditayanandi (reigned ca. 600). ...Mangalahamsika and her king were members of the Patola Shahi dynasty...The Sanskrit donor inscription engraved on the front cartouche states: “Om. This is a pious gift. This pious gift was ordered to be made by the Shri Paramadevi [Highest Queen] Mangalahamsika” (trans. O. von Hinueber)."....http://www.metmuseum.org/collection/the-collection-online/search/76445

"Although the full evidence cannot be given in this paper, I believe the chronology of the westward advance of the Tibetan empire into these regions (7th-9th centuries AD), with the subsequent ethnic Tibetanisation of parts of them, can now be outlined with a much higher degree of confidence. Against this background the paper will consider the range, iconography, stylistics and epigraphy of these rock reliefs using published and unpublished material. It will also briefly review the sculptural and other art of the Patola Shahi dynasty of Gilgit in relation to historical developments. The paper will conclude that while the new Tibetan rulers brought the art of the Patola Shahis to an end, they encouraged and sponsored the production of most or all of the rock carvings under consideration."......Recent discoveries of rock-carvings and rock- artefacts from Swat valley (Pakistan) Luca Maria Olivieri: IsIAO, Romehttp://www.ucl.ac.uk/southasianarchaeology/Tibetan.pdf 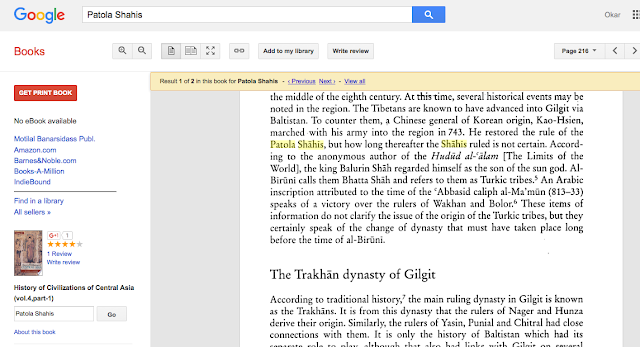 "Before the invasion of Tibetans in 727, the official language of both the Palola Shahis and the clergy was Brahmi, brought into the area after the 4th legendary Buddhist Conference in Jalandhar. ...The best-known Brahmi inscriptions are the rock-cut edicts of Ashoka in north-central India, dated to 250–232 BC......The Balti language (Urdu: بلتی‎; Wylie: sbal ti skad, THL: Beltiké ) is a Tibetic language spoken in Baltistan division of Gilgit-Baltistan, Pakistan, and adjoining parts of Ladakh, India. It is quite different from Standard Tibetan. Many sounds of Old Tibetan that were lost in Standard Tibetan are retained in the Balti language. The Balti ethnicity is primarily Tibetan in origin, with some Dardic admixture. However people migrated to this area in different periods of ancient times for different reasons, and after merging in the prevailing Tibetan society, gave birth to a new civilization."

"Balurin Shah regarded himself as the son of the Sun God."......First King of the Palola Shahis was Surendra ditya nandi........ King Vajra ditaya nandi...http://journals.cambridge.org/action/displayAbstract?fromPage=online&aid=856900

"The Kabul Shahi also called Shahiya dynasties ruled .....which included portions of the Kabulistan and the old province of Gandhara (now in northern Pakistan), from the decline of the Kushan Empire in the 3rd century to the early 9th century. The kingdom was known as Kabul Shahi (Kabul-shāhān or Ratbél-shāhān in Persian کابلشاهان یا رتبیل شاهان) between 565 and 879 when they had Kapisa and Kabul as their capitals, and later as Hindu Shahi......The Shahis of Kabul/Gandhara are generally divided into the two eras of the "Buddhist Shahis" and the "Hindu Shahis", with the change-over thought to have occurred sometime around 870 AD......"In 672 an Arab governor of Sistan, Abbad ibn Ziyad, raided the frontier of Al-Hind and crossed the desert to Gandhara, but quickly retreated again. The marauder Obaidallah crossed the Sita (Kabul) River and made a raid on Kabul in 698 AD only to meet with defeat and humiliation. Vincent Smith, in Early History of India, states that the Turki Shahiya dynasty continued to rule over Kabul and Gandhara up until the advent of the Saffarids in the ninth century. Forced by the inevitable advance of Islam on the west, they then moved their capital from Kapisa to Wahund on the Indus, whence they contin­ued as the Hindu Shahiya dynasty. This was in 870 A.D. and marks the first time that the Kingdom of Shambhala actually came under Moslem domination. The Hindu Shahis recaptured Kabul and the rest of their Kingdom after the death of the conqueror Yaqub but never again maintained Kapisa as their capital."....http://www.dharmafellowship.org/biographies/historicalsaints/lord-padmasambhava.htm#eightcentury