"No representations of the Buddha were made for about four or five centuries. It is sometimes said that prior to this time it was 'forbidden' to make statues or pictures of the Buddha, but this is unlikely and there is no evidence of such a prohibition. A more likely explanation is that until then symbols of the Buddha (stupas, footprints, an empty throne etc.) and written descriptions of him were deemed sufficient. Whatever the reasons, the first Buddha statues were produced in about the 1st or 2nd century AD in Bactria (Afghanistan and northern Pakistan) perhaps as a result of Greek influence....".....http://www.buddhanet.net 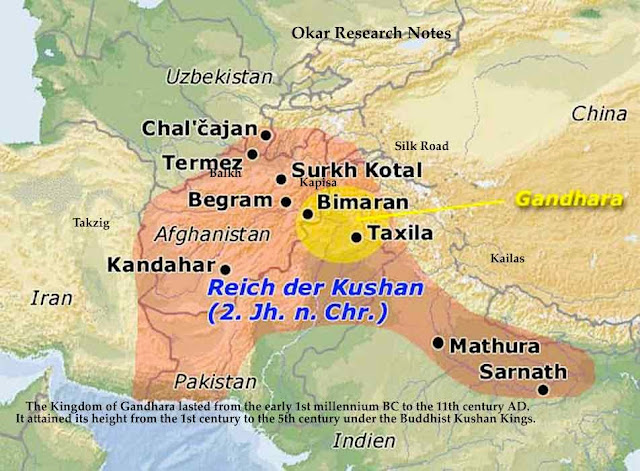 The Kingdom of Ghandara lasted from the early 1st millennium BC to the 11th c. AD.... In 327 BC Alexander the Great conquered Gandhara....Click on the map to enlarge.

"One of the distinguishing features of the Gandharan school of art .... is that it has been clearly influenced by the naturalism of the Classical Greek style. Thus, while these images still convey the inner peace that results from putting the Buddha's doctrine into practice, they also give us an impression of people who walked and talked, etc. and slept much as we do. I feel this is very important. These figures are inspiring because they do not only depict the goal, but also the sense that people like us can achieve it if we try" (The Dalai Lama, foreword to Echoes of Alexander the Great, 2000).

"Anionic....not employing or permitting images, idols, etc...... When enforced by the physical destruction of images, aniconism becomes iconoclasm. The word itself derives from Greek εικων 'image' with the negative prefix an-....Buddhist art used to be aniconic: the Buddha was only represented through his symbols (an empty throne, the Bodhi tree, the Buddha's footprints, the prayer wheel). This reluctance towards anthropomorphic representations of the Buddha, and the sophisticated development of aniconic symbols to avoid it (even in narrative scenes where other human figures would appear), seem to be connected to one of the Buddha's sayings, reported in the Digha Nikaya, that discouraged representations of himself after the extinction of his body......Although there is still debate, the first anthropomorphic representations of the Buddha himself are often considered a result of the Greco-Buddhist interaction." 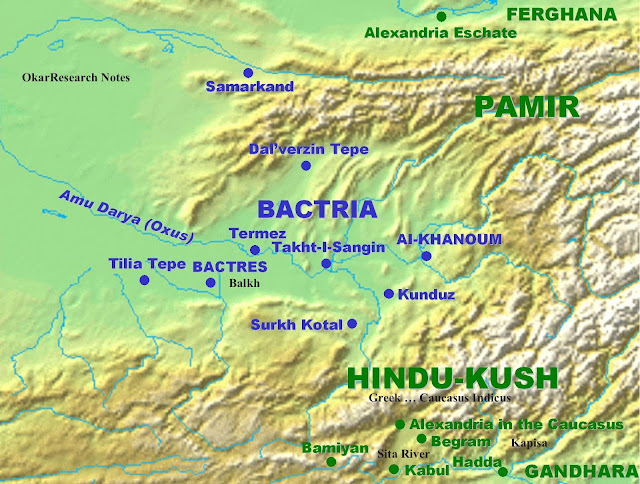 "Foucher's most famous work was L'Art Gréco-Bouddhique du Gandhara in which he described how Buddhist art prior to Pan-Hellenism was principally aniconic .representing the Buddha by depicting elements of the Buddha's life instead of depicting the Buddha himself. Foucher argued that the first sculpted images of the Buddha were heavily influenced by Greek artists. He coined the term "Greco-Buddhist art".......Foucher especially considered Hellenistic free-standing Buddhas as "the most beautiful, and probably the most ancient of the Buddhas", assigning them to the 1st century BC, and making them the starting point of the anthropomorphic representations of the Buddha ....archeological discoveries in Central Asia however (such as the Hellenistic city of Ai-Khanoum and the excavation of Sirkap in modern Pakistan), have been pointing to rich Greco-Bactrian and Indo-Greek civilizations in these areas, reviving the Hellenistic thesis."....the Greco-Buddhist bas-reliefs.......The Beginnings Of Buddhist Art.....by A.Foucher...... 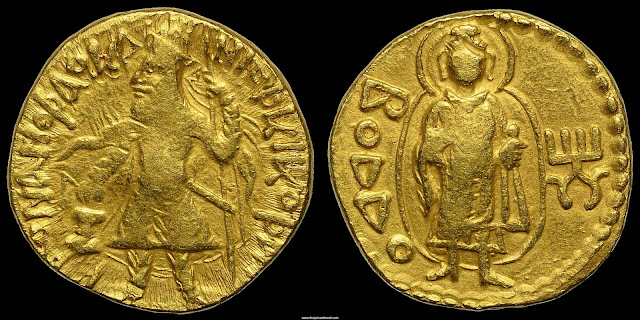 "Kushana coins present some of the earliest images of the Buddha......Gold coin of Kanishka I with a representation of the Buddha (c.120 AD).......Kanishka standing..Kushan-language legend in Greek script ϷΑΟΝΑΝΟϷΑΟ ΚΑΝΗϷΚΙ ΚΟϷΑΝΟ ("Shaonanoshao Kanishki Koshano"): "King of Kings, Kanishka the Kushan"......Reverse: Standing Buddha in Hellenistic style, forming the gesture of "no fear" (abhaya mudra) with his right hand, and holding a pleat of his robe in his left hand. Legend in Greek script: ΒΟΔΔΟ "Boddo", for the Buddha. Kanishka monogram (tamgha) to the right."

"Greco-Buddhist art is the artistic manifestation of Greco-Buddhism, a cultural syncretism between the Classical Greek culture and Buddhism, which developed over a period of close to 1000 years in Central Asia, between the conquests of Alexander the Great in the 4th century BC, and the Islamic conquests of the 7th century AD. Greco-Buddhist art is characterized by the strong idealistic realism and sensuous description of Hellenistic art and the first representations of the Buddha in human form, which have helped define the artistic (and particularly, sculptural) canon for Buddhist art throughout the Asian continent up to the present. It is also a strong example of cultural syncretism between eastern and western traditions......The origins of Greco-Buddhist art are to be found in the Hellenistic Greco-Bactrian kingdom (250 BC- 130 BC), located in today’s Afghanistan, from which Hellenistic culture radiated into the Indian subcontinent with the establishment of the Indo-Greek kingdom (180 BC-10 BC). Under the Indo-Greeks and then the Kushans, the interaction of Greek and Buddhist culture flourished in the area of Gandhara, in today’s northern Pakistan, before spreading further into India, influencing the art of Mathura, and then the Hindu art of the Gupta empire, which was to extend to the rest of South-East Asia. The influence of Greco-Buddhist art also spread northward towards Central Asia, strongly affecting the art of the Tarim Basin, and ultimately the arts of China, Korea, and Japan."....https://en.wikipedia.org/wiki/Greco-Buddhist_art

"Some of the oldest Buddha statues were recorded in the city of Gandhara.....in the northern Pakistan and northeastern Afghanistan, Gandhara was the center of Hindu culture and Greco-Buddhist culture..... Gandhara culture took a height of a peak during the reign of the Great Kushan King Kanishka (128-151).....A remarkable example of Greco-Buddhist Statuary which was built in Gandhara is The Standing Buddha Statues which reside in the Tokyo National Museum. The statue is dated around 1st or 2nd Century CE......“the most beautiful, and probably the most ancient of the Buddhas”.....These statues can be said as the starting point of the anthropomorphic representations of the Buddha." 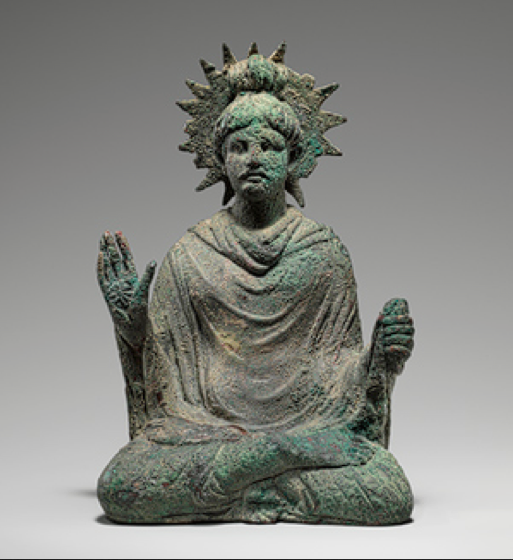 The Seated Buddha from Gandhara is one of the early Buddha statue built which was discovered at the site of Jamal Garhi in ancient Gandhara.

"The exact date of the Buddha's birth is disputed, with Nepalese authorities favoring 623 B.C., and other traditions favoring more recent dates, around 400 B.C.......Regardless, by 249 B.C. Lumbini had became one of the four sacred centers of Buddhism, marked by sanctifying inscriptions and a pillar left there in 249 B.C. by the Indian emperor Ashoka, who helped spread Buddhism across Asia."....

"Buddhist Shrine (550 B.C.)......the earliest ever Buddhist shrine. This 6th century timber structure was found underneath of Maya Devi Temple in Lumbini......The center of the shrine was unroofed, the team found, and contained mineralized tree roots, surrounded by clay floors worn smooth by visitors. It was likely an ancient bodhigara, or tree shrine......The tree roots appear to have been fertilized, and although bodhigara are found in older Indian traditions, the shrine lacked the signs of sacrifices or offerings found at such sites......It was very clean, in fact, which points to the Buddhist tradition of nonviolence and nonofferings....excavations at the site point to its cultivation starting around 1000 B.C., followed by the development of a Buddhist monastery-like community by the sixth century B.C......The new evidence from this project shows that this ritual activity was taking place centuries prior to the Asokan levels, and this is really significant and interesting,"....Oldest Buddhist Shrine Uncovered In Nepal May Push Back the Buddha's Birth Date ...By Dan Vergano, National Geographic.......2013

"Gāndhāra, a district traditionally placed in the extreme northwest of the Indian subcontinent. It was located along both banks of the Indus, around the famous cities of Takshaśilā (Taxila) and Pushkalāvatī (modern Charsada, northeast of Peshawar).....Gandhari in the Rigveda, along with the Balhikas (Bactrians) ...The name Gandhārī first occurs in the Rigveda (I, 126,7; late 2nd millennium B.C.E.) in the phrase Gandhārīnām avikā (ewe of the Gandharans), and also in the somewhat later Atharva Veda. The name is used, around 400 B.C., by Pānini, who himself probably hailed from Gāndhāra."...http://www.iranicaonline.org/articles/gandhara-

"As soon as the Greeks invaded India to form the Indo-Greek kingdom, a fusion of Hellenistic and Buddhist elements started to appear, encouraged by the benevolence of the Greek kings towards Buddhism. This artistic trend then developed for several centuries and seemed to flourish further during the Kushan Empire from the 1st century AD.....Greco-Buddhist art depicts the life of the Buddha in a visual manner, probably by incorporating the real-life models and concepts which were available to the artists of the period......The Bodhisattvas are depicted as bare-chested and jewelled Indian princes, and the Buddhas as Greek kings wearing the light toga-like himation. The buildings in which they are depicted incorporate Greek style, with the ubiquitous Indo-Corinthian capitals and Greek decorative scrolls. Surrounding deities form a pantheon of Greek (Atlas, Herakles) and Indian gods (Indra).".....https://en.wikipedia.org/wiki/Greco-Buddhist_art

"GANDHĀRAN ART: The region attained its peak of prosperity in the Kushan period (1st to 3rd centuries AD), when it became one of the strongholds of Buddhism, and developed an advanced urban life where the Gandhāra art flourished.... In the 1st century AD, Parthian and Roman merchants brought in the art and culture of their respective lands and local Hellenistic art tradition, and Buddhist missionaries the elements of Buddhist art. This last factor was developed into a synthesis combining eastern Hellenistic and Bactrian styles with the Indian art of anthropomorphic representations of the Buddhist personages.".....http://www.iranicaonline.org/articles/gandharan-art

".... The difficulty of assigning a single origin to the Gandharan art...... three different interpretations have arisen:
1.) .....the Greeks had exerted a primary impact on the making of the Gandhāran art, and connected it with the rise of the Greco-Bactrian state and, following its fall, the influx of Greek population into northwest India.
2.).....influences from the west, namely, Roman, Palmyran and Parthian.
3.).....the roots of Gandhāran art exclusively in India.
In recent decades, excavations at Ai-Khanum and the Oxus temple (c. 280 BC ) considerably strengthened the position of those scholars who advocate the theory of Greek influence coming from Bactria and of Bactrian contribution. At the same time, the Oxus temple provided archaeological evidence for the presence of considerable Roman influence. All these trends integrated with Indian artistic foundation within the frames of Buddhist ideology. A rapid standardization of Buddhist iconography took place. It started, as demonstrated by materials from Taxila and Butkara I, as early as the 1st century BC. Local architects, sculptors and artists familiar with the Hellenising tradition combined these elements of different origin to create their own artistic repertoire, canons and models, and this development represent the Gandhāran style.".....http://www.iranicaonline.org/articles/gandharan-art

"Krishna said in the Bhagavad Gita, Chapter 12, Verse 5, ...'it is much more difficult to focus on God as the unmanifested than God with form, due to human beings having the need to perceive via the senses.'.....'For those whose minds are attached to the un-manifested, impersonal feature of the Supreme, advancement is very troublesome. To make progress in that discipline is always difficult for those who are embodied.'.....http://www.bhagavad-gita.org/Gita/verse-12-04.html

"Bharhut (Hindi: भरहुत) is a village located in the Satna district of Madhya Pradesh, central India. It is known for its famous relics from a Buddhist stupa. The Bharhut sculptures represent some of the earliest examples of Indian and Buddhist art......The Bharhut stupa may have been first built by the Maurya king Ashoka in the 3rd century BC, but many works of art were apparently added during the Shunga period, with many friezes from the 2nd century BC.....In conformity with the early aniconic phase of Buddhist art, the Buddha is only represented through symbols, such as the Dharma wheel, the Bodhi tree, an empty seat, footprints, or the triratana symbol......"