"The Vedic period (or Vedic age) (c. 1500–500 BC) was the period during which the Vedas, were composed....The people who were responsible for the evolution of this civilization called themselves Aryas or Aryarns......Arya’ literally means the man of ‘noble character’, and the “free-born”.........The Aryans appeared a little earlier than 1500 B.C. The earliest Aryans settled down in eastern Afghanistan, Punjab, and fringes of Uttar Pradesh......Many of the rivers of Pakistan and Afghanistan are mentioned in the Rig Veda. The Sanskrit word later changed to Kābul......The Kubha is the modern Kabul River (aka Sita River).' 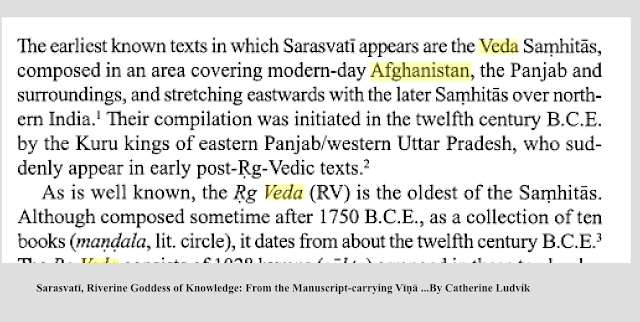 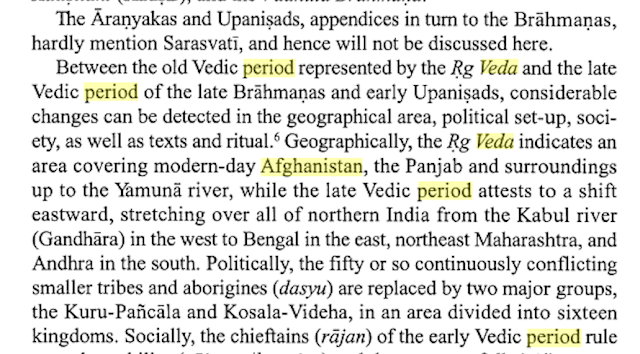 "Yajurveda........ (Sanskrit: यजुर्वेद, yajurveda, from yajus meaning "prose mantra" and veda meaning "knowledge") is the Veda of prose mantras.....An ancient Vedic Sanskrit text, it is a compilation of ritual offering formulas that were said by a priest while an individual performed ritual actions such as those before the yajna fire......The exact century of Yajurveda's composition is unknown, and estimated by scholars to be around 1200 to 1000 BCE, contemporaneous with Samaveda and Atharvaveda.

.... "The Yajurveda is broadly grouped into two – the "black" (Krishna) Yajurveda and the "white" (Shukla) Yajurveda. The term "black" implies "the un-arranged, unclear, motley collection" of verses in Yajurveda, in contrast to the "white" (shukla) which implies the "well arranged, clear" .....

"White" (Shukla) Yajurveda.....Shukla (Sanskrit: शुक्ल) is a word of Sanskrit origin that means "white". .....Shukla paksha refers to the bright lunar fortnight or waxing moon in the Hindu calendar. .......Bala Kanda (Sanskrit bālakāṇḍa, the book of the childhood) is the first book of the Valmiki Ramayana, which is one of the two great epics of India(the other being the Mahabharata).... Bāla-kāṇḍa or Ādi-kāṇḍa

"Samhita (Sanskrit: संहिता, saṁhitā) literally means "put together, joined, union" and "a methodically, rule-based combination of text or verses".....Samhita also refer to the most ancient layer of text in the Vedas, consisting of mantras, hymns, prayers, litanies and benedictions......"

"A treatise on Mithra, forming part of a study on the Shambala Kingdom and Bala Khanda. This is from the Zoroastrian point of view that also touches on Mitra to the Romans and beyond."


"Mahīdhara ("earth-bearing") was a 16th-century commentator of the Vedas. His treatises include the Mantramahodadhi (mantra-uda-dhí, "great ocean of mantras") of ca. 1588, and the Vedadipa (veda-dīpa, "light of the Vedas"). The latter concerns the Vajasaneyi-samhita of the White Yajurveda......Mahīdhara's namesake is a legendary mountain described in the Mahabharata, which is also an epithet of Vishnu....He is assumed to have composed his commentary, the Vedadipa on the Mādhyandina Samhitā of the Śukla Yajurveda around A. D. 1587. Mahidhara was a resident of Kāśī.....In his commentary, he has been influenced by Uvaṭācārya (11th century A. D.) an earlier commentator on the same work to a great extent. However, his explanations are more detailed. He quotes profusely from the śrautasutras. He was also the author of the work entitled Mantramahodadhi, which discusses the tantras....It is very difficult to understand the Vedas not only because of their archaic language but also because they are closely associated with a system of rituals with which we are not at all familiar. "....http://www.hindupedia.org

"The Yajur veda Samhita has two well known recensions or versions namely Krishna and Shukla. ...This book is the first part of one recension of shukla Yajur veda known as vajaseneya madhyanadina....The focus here is on the inner yajna which takes place in our subtle body. Of course there is close correspondence between the inner yajna involving the offering to the fire in the altar of ghee, fuel, soma juice along with the recitation of the rik and saman mantra.....Sanskrit is a rich language in which several completely different meaning are possible for the same verse.....Many of the translator of Yjaur veda have forced their own meanings on the verses implying animal sacrifice and other unseemly features. ....we do not claim the meaning we have assigned to each verse is only the true one.....The entire VS book has been rendered into English by R.T.H. Griffith in 1899.... all the principal gods and goddesses such as Agni Indra, Surya are invoked one by one to manifest in the body of the aspirant and thus render the being whole of complete......One usually assumes that Veda-s are ritualistic and hence it is assumed that no question are posed. It is said that the habit of posing question appears only in the Upanishad.......This book contains the text and translation of all the 949 verses in the chapter 19t hrough 40 of the shukla Yajur veda Vajasaneya samhita".....Yajur Veda: Vajasaneyi Samhita....by R.L. Kashyap (2012) ...http://www.exoticindiaart.com

"The Yajurveda is two-fold......
1. The White (or Pure) Yajurveda
2. The Black (or Dark) Yajurveda
Yajyavalkya prayed to the Sun, who came to him in the form of a horse i.e. Vaji ) and gave him back the Yajush. Hence this Yajurveda was named Shukla or Vajasaneyi."......http://ignca.nic.in/vedic_heritage_intro_yajurveda.htm

"The Vedic period (or Vedic age) (c. 1500–500 BC) was the period during which the Vedas, were composed....The people who were responsible for the evolution of this civilization called themselves Aryas or Aryarns......Arya’ literally means the man of ‘noble character’, and the “free-born”.........The Aryans appeared a little earlier than 1500 B.C. The earliest Aryans settled down in eastern Afghanistan, Punjab, and fringes of Uttar Pradesh. The Rig-Veda mentioned the names of some rivers of Afghanistan such as the river Kubha, and the river Indus and its five branches....The word Kubhā (कुभा ) which is the ancient name of the river is both a Sanskrit and Avestan word. Many of the rivers of Pakistan and Afghanistan are mentioned in the Rig Veda. The Sanskrit word later changed to Kābul......The Kubha is the modern Kabul river which flows into the Indus a little above Attock and receives at Prang the joint flow of its tributaries the Swat (Swastu) and Gauri "...https://en.wikipedia.org/wiki/Rigvedic_rivers

"Grammatically there is little difference between the languages of the Avesta and the Vedas.....Words such as devá have the meaning of god in the Vedas have the meaning of devil in the Avesta. Likewise some names for Vedic gods show up in the Avesta as evil spirits. This is likely due to the ancestors of the migrants to North India being a competing tribe of the tribe responsible for the creation of the Avesta."....http://www.sjsu.edu/faculty/watkins/sanskritavestan.htm

Email ThisBlogThis!Share to TwitterShare to FacebookShare to Pinterest
Labels: Avesta, History, The Vedas