King Gondophares ....."The Acts of Thomas (Ch. 17) describes Saint Thomas' visit to King Gondophares .....When Acts was being composed, there was no reason to suppose that a king named "Gondophares" had ever really existed. However, the discovery of his coins in the region of Kabul and the Punjab, and the finding of a votive inscription of his 26th regal year that was unknown until 1872, provided evidence that his reign commenced in 21 C.E. until c. 47 C.E.".....http://www.newworldencyclopedia.org

"Saint Thomas the Apostle (also known as Judas Thomas or Didymus, meaning "Twin") ......Thomas was said to have taken Christianity eastwards as far as India. The churches of Malankara in India trace their roots back to St. Thomas who, according to local tradition, arrived along the Malabar Coast in the year 52 AD....."

"The reign of one king calling himself Gondophares has been established at 20 AD by the rock inscription he set up at Takht-i Bahi (also known as Takht Bahi) in Mardan, western Pakistan, in 46 AD., and he has also been connected with the third-century Acts of Thomas. Recent research has however shown unambiguously that "Gondophares" was a title held by many kings.....Takht Bhai (or Takht Bahi) is a Parthian archaeological site in Mardan, Khyber-Pakhtunkhwa, Pakistan. It was first a Zoroastrian complex which, after the later arrival of Buddhism, was then converted into a Buddhist monastic complex. It is dated to the 1st century BC." 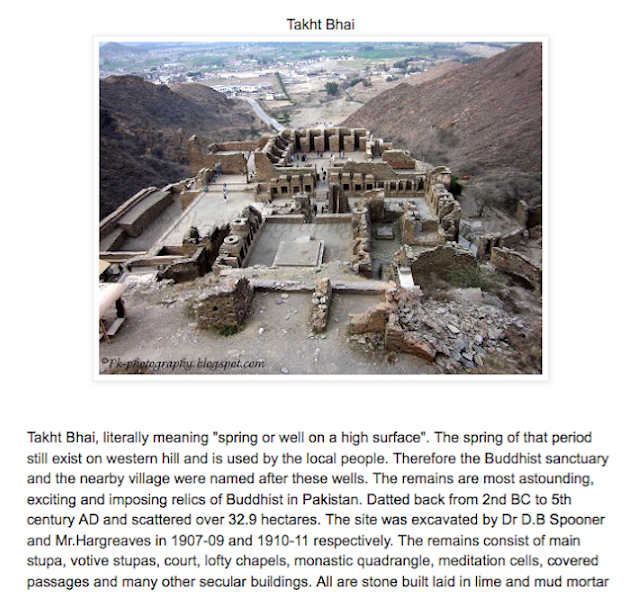 "Takht Bhai is a Parthian archaeological site in Mardan, Khyber-Pakhtunkhwa, Pakistan. It was first a Zoroastrian complex which, after the later arrival of Buddhism, was then converted into a Buddhist monastic complex. It is dated to the 1st century BC.....The Takht Bahi complex includes The Tantric monastic complex, which consists of small, dark cells with low openings, which may have been used for certain forms of Tantric meditation, which took place in the 6th and 7th Centuries AD, and was overseen by invading Hun rulers......Nearby are the ruins of Sahr-i-Bahlol, a small fortified city dating from the same period.....Sahr-i-Bahlol, is located approximately 5 km away in a fertile plain. The Sahr-i-Bahlol ruins are the remnants of a small ancient fortified town of the Kushan period. ....The Buddhist monastery was in continual use until the 7th century AD.....Due to the location of on the Buddhist Ruins of Takht-i-Bahi on high hills, it escaped successive invasions and is exceptionally well preserved..... 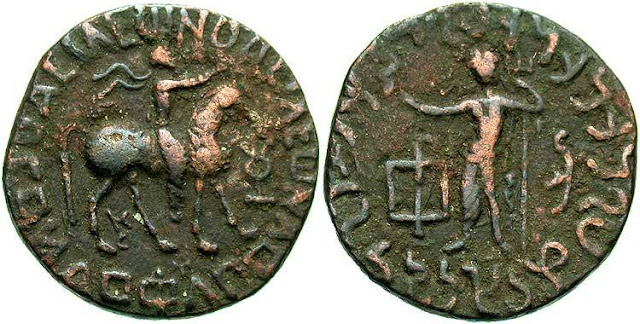 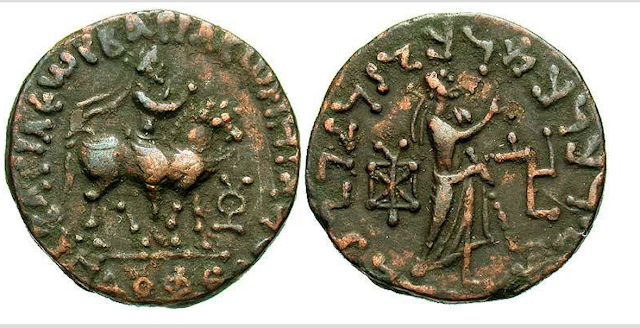 "King Gondophares I took over the Kabul valley and the Punjab and Sindh region area from the Scythian King Azes.....Gondophares declared independence from the Arsacids (aka: Parthian Empire) to become the first Indo-Parthian king ....His empire was vast, but was only a loose framework, which fragmented soon after his death. His capital was the Gandharan city of Taxila, to the west of the present Islamabad. Ernst Herzfeld claims his name is perpetuated in the name of the Afghan city Kandahar, which he founded under the name Gundopharron....Ancient Taxila was situated at the pivotal junction of South Asia and Central Asia. Some of the earliest ruins in this area date to the time of the Achaemenid Empire in the 6th c. BC."......Ernst Herzfeld, Archaeological History of Iran, London, Oxford University Press for the British Academy, 1935, p.63.

"The Saint Thomas Christians refer to themselves in this way because their tradition holds that their ancestors, who all came from the high castes of Hindu society, were converted by the Apostle Saint Thomas, who landed in India in the year 52 AD. At present there is no way to scientifically prove or disprove this tradition. One thing is certain: ever since the discovery of the monsoon winds in 45 AD by Hippalos, an Alexandrian ship-captain, the land and sea routes were open from the Mediterranean via the Persian Gulf to India, and there were indeed intense contacts between these areas. One after the other, Roman coins of the first century AD are being unearthed in southern India.".....Project for Preserving the Manuscripts of the Syrian Christians in India

"Azes I (57 BC – c. 35 BC)...... an Indo-Scythian ruler who completed the domination of the Scythians in Gandhara.....Indo-Scythians is a term used to refer to Scythians (Sakas), who migrated into parts of central and northern South Asia (Sogdiana, Bactria, Arachosia, Gandhara, Sindh, Kashmir, Punjab, Haryana, Rajasthan, UP and Bihar.), from the middle of the 2nd century BC to the 4th century AD..... It is believed that the Greek era may have begun in 173 BC, exactly 300 years before the first year of the Era of Kanishka. If that is the case then the Azes era would begin in about 45 BC."....Bracey, R. (2005) 'The Azes Era'

"The Buddhist monastery Takht-i-Bhai (Throne of Origins) is an archaeological wonder, considered to be significant because of its unique design. "The site is extremely important for its integrity and unique state of conservation; important also for its antiquity, being built certainly during the 1st century CE, as proven by the important inscriptions bearing the name of Gondophares (20-46 CE)," says the Director of the Italian Archaeological Mission in Pakistan, Dr Luca Maria Olivieri......He says Gondophares was a Parthian King of the Suren House, from Sakastan, or Sistan...."Soon after Gondophares, Takht-i-Bahi was under the control of Kujula Kadphises, the first Kushan King. The site remained in use certainly until Late Antiquity (7th CE).....the site is a symbol of architectural complexity of a Buddhist monastic complex, and it should be considered a wonderful introduction to Gandharan Buddhist architecture, a must stop for tourist heading towards Swat.".....http://www.sundayobserver.lk/2015/06/14/spe-her-01.asp

"The early 3rd-century text called Acts of Thomas is one of the New Testament apocrypha......Acts of Thomas is a series of episodic Acts (Latin passio) that occurred during the evangelistic mission of Judas Thomas ("Judas the Twin") to India......Though Gregory of Tours made a version, mainstream Christian tradition rejects the Acts of Thomas as pseudepigraphical and apocryphal, and for its part, the Roman Catholic Church finally confirmed the Acts as heretical at the Council of Trent. ....The Acts of Thomas connects Thomas, the apostle's Indian ministry with two kings, one in the north and the other in the south. According to one of the legends in the Acts, Thomas was forced to accompany an Indian merchant, Abbanes, to his native place in northwest India, where he found himself in the service of the Indo-Parthian king Gondophares."

" Song Yun, a Chinese pilgrim.....was a Chinese Buddhist monk who was sent by the devout Buddhist Empress Hu (胡, ?-528 CE) of the Northern Wei Dynasty with some companions including the monk Hui Zheng, Fa Li and Zheng (or Wang) Fouze, to northwestern India to search for Buddhist texts.....They left the Wei capital Luoyang, on foot in 518 and returned in the winter of 522 with 170 Mahayana Buddhist texts....Song Yun and his companions then travelled through Chitral and met the kings of the Swat Valley or Udyana..... Song Yun: Takht-i-Bhai & Sahr-i-Bahlol ... From the description of Song Yun, a Chinese pilgrim, it appears that it was on one of the four great cities lying along the important commercial route to India."

"The Hephthalite Huns captured Gandhara around 451, and did not adopt Buddhism, but in fact "perpetrated frightful massacres". Mihirakula became a "terrible persecutor" of the religion.....During their rule, Hinduism revived itself and the Buddhist Gandharan civilization declined. The Sassanids, aided by Turks from Central Asia, destroyed the Huns' power base in Central Asia, and Gandhara once again came under Persian suzerainty in 568......The travel records of many Chinese Buddhists pilgrims record that Gandhara was going through a transformation during these centuries. Buddhism was declining and Hinduism was rising. Fa-Xian travelled around 400, when Prakrit was the language of the people and Buddhism was flourishing. 100 years later, when Song-Yun visited in 520, a different picture was described: the area had been destroyed by the White Huns and was ruled by Lae-Lih, who did not practice the laws of the Buddha. After the fall of the Sassanid Empire to the Arabs in 644, today's Afghanistan region and Gandhara came under pressure from Muslims. But they failed to extend their empire to Gandhara. Gandhara was first ruled from Kabul and then from Udabhandapura (Hind).....Gandhara was ruled from Kabul by Kabulshahi for next 200 years. Sometime in the 9th century the Kabulshahi replaced the shahi. Based on various Muslim records the estimated date for this is 870. According to Al-Biruni (973–1048), Kallar, a Brahmin minister of the Kabulshahi, founded the Shahi dynasty in 843. The dynasty ruled from Kabul, later moved their capital to Udabhandapura. They built great temples all over their kingdoms." 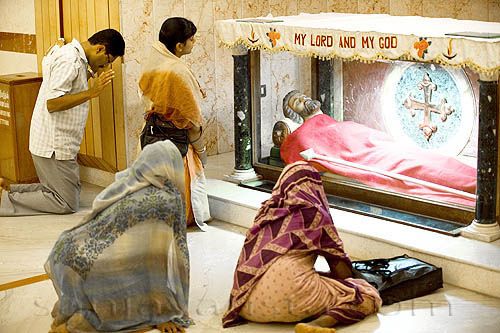 "The tomb of St. Thomas the Apostle in Mylapore, India.....According to tradition, St. Thomas was killed at Mylapore, near Chennai, in 72 and his body was interred there....A few relics are still kept at San Thome Basilica in Mylapore, India. Marco Polo, the Venetian traveller and author of Description of the World, popularly known as Il Milione, is reputed to have visited Southern India in 1288 and 1292. "