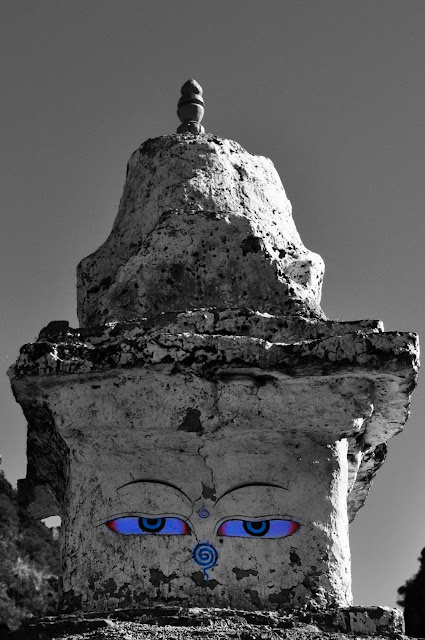 "On virtually every stupa, which is a shrine of Buddhism, in Nepal, there are giant pairs of eyes staring out from the four sides of the main tower.......These are Buddha Eyes (also known as Wisdom Eyes), and they look out in the four directions to symbolize the omniscience (all-seeing) of a Buddha. The Buddha eyes are so prevalent throughout the country that they have become a symbol of Nepal itself......Between the Buddha's eyes where the nose would be is a curly symbol that looks like question mark. This is the Nepali character for the number 1, which symbolizes unity of all the things as well as the one way to reach enlightenment—through the Buddha's teachings. Above this is a third eye, symbolizing the all-seeing wisdom of the Buddha.".......Swayambunath Stupa, Kathmandu - Sacred Destinations 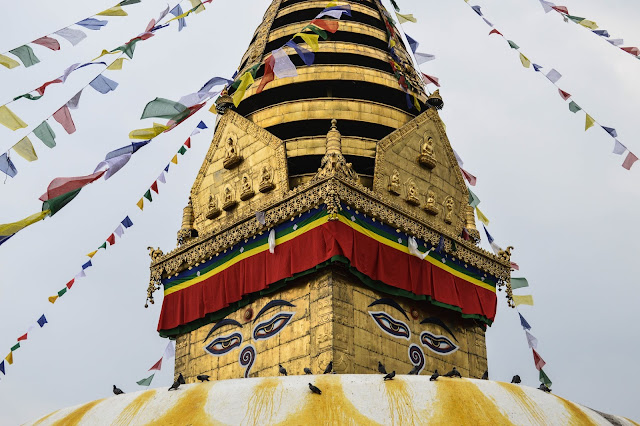 "The earliest written record of the Swayambunath Stupa's existence is a 5th-century stone inscription, but scholars believe there was probably a shrine here as early as the 1st century. Even before that, it is likely that animist rites took place on this hill. Swayambunath is one of Nepal's oldest Buddhist temples and it has an ancient atmosphere, especially when one approaches on foot with the pilgrims."...http://www.sacred-destinations.com/nepal/kathmandu-swayambhunath-stupa 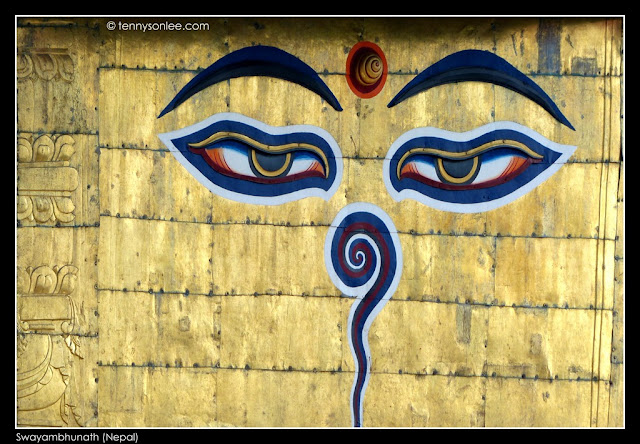 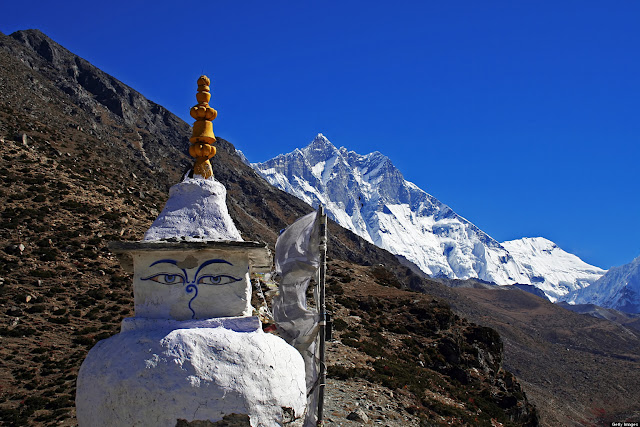 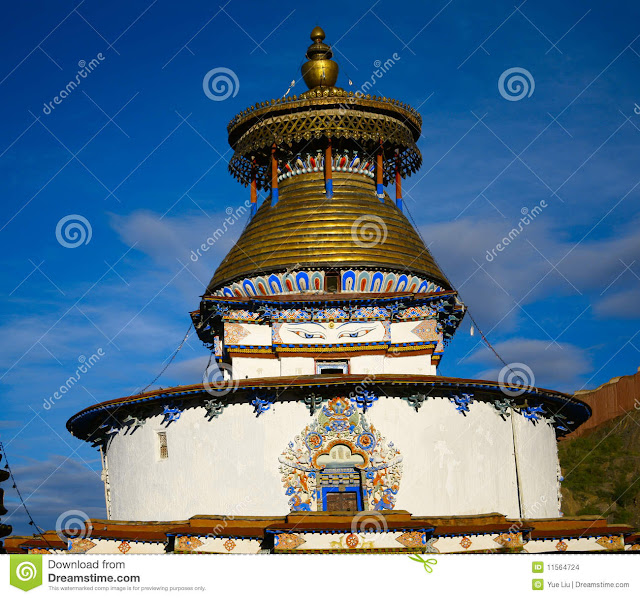 "Miksang is a Tibetan word meaning "good eye." It represents a form of contemplative photography based on the Dharma Art teachings of Chögyam Trungpa, in which the eye is in synchronisation with the contemplative mind. The result of this particular perception of the world, combined with photography, produces a peculiar and open way of seeing the world. ".....Midal, Fabrice (2004) Chögyam Trungpa: His Life and Vision

"Dzi bead (Tib. གཟི།; pronounced "zee"; alternative spelling: gzi) is a type of stone bead of uncertain origin worn as part of a necklace and sometimes as a bracelet. In several Asian cultures, including that of Tibet, the bead is considered to provide positive spiritual benefit. These beads are generally prized as protective amulets ......The number of "eyes," circular designs on the Dzi stones, is considered significant. The symbolic meaning of these beads is based on the number and arrangement of the dots. The highest number of eyes on ancient dzi is twelve....Dzi stones made their first appearance between 2000 and 1000 BC.....a few hundred thousand were supposedly brought back by Tibetan soldiers from Persia or ancient Tajikistan during a raid. The malicious effect of the “evil eye” was taken very seriously by these people. Dzi were considered to counteract the evil eye. The artisans who made the dzi created amulets with “eyes” on them as a “fight fire with fire” form of protection."....https://en.wikipedia.org/wiki/Dzi_bead 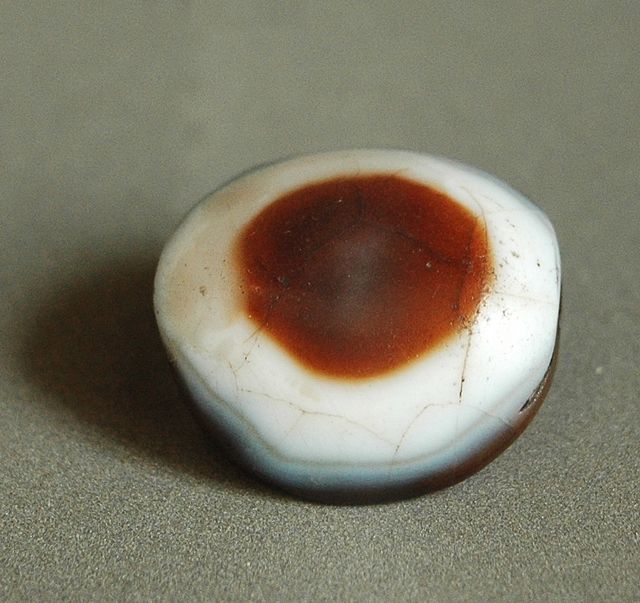 An ancient goat eye bead from a site in Warad-Sin, Iraq. This ancient Mesopotamian bead is very similar to the Luk Mik beads used by Tibetans. Beads like these are also found in Afghanistan and Bactria.

"Five eyes.....The five kinds of vision, or literally “five eyes” (Skt. pañcacakṣu; Tib. chen nga; Wyl. spyan lnga) are:
Māṃsacakṣu.....the eye of flesh (Skt. māṃsacakṣu; Wyl. sha’i spyan), which refers to an eye faculty developed through the force of one’s merit, having the ability to see all forms, gross or subtle, from one hundred leagues through to the limits of the three thousand-fold universe;
Divyacakṣu.... the divine eye (Skt. divyacakṣu; Wyl. lha’i spyan), which is the effortless ability to see the births and deaths of all beings and is a result of the practice of meditation in past lives... From a human perspective, devas share the characteristic of being invisible to the physical human eye. The presence of a deva can be detected by those humans who have opened the divyacaksu (Pali: dibbacakkhu),
Prajñācakṣu.....the wisdom eye (Skt. prajñācakṣu; Wyl. shes rab kyi spyan), which sees the truth of dharmata;
Dharmacakṣu.....the Dharma eye (Skt. dharmacakṣu; Wyl. chos kyi spyan), which is the knowledge of the Dharma of scripture (or transmission) and realization, and of the faculties of noble beings who possess this Dharma;
Buddhacakṣu.....the Buddha eye (Skt. buddhacakṣu; Wyl. ye shes kyi spyan), which is the primordial wisdom (yeshé) that sees all aspects of everything that can be known.... ability to the appearance and the natural purity of phenomenon at the same time.........ye shes kyi spyan.......the eye of wisdom [RY].......spyan lnga, eye of wisdom [JV].........wisdom eyes [RY] .
.......http://www.rigpawiki.org

"From the heart to the eyes there is a connecting vessel-path (maidao). It is the most secret duct (ji mimi guan) like crystal whose name is Kati. ...This Crystal Duct is a vessel-path linking the heart to the eyes and is qualified as li ..., "a principle absolutely free from any error".......the Far-reaching Water Lamp is a vessel that from the navel wheel passes through the heart and opens into the eyes. From the back of the brain it divides into two branches which look like wild ox horns (below the brain it becomes a single root). ...The smooth and luminous tip of this horn-like branch is the pupil; it is "like the light on the surface of clear water allowing light to move and reflecting objects; this is why it is called Vessel of the Far-reaching Water Lamp ... ." It is at the same time a synonym of the Crystal Duct, the "principle" which links the four following vessels (Ch. qimai ...) :
(1) Kati—The Great Golden Vessel (Ch. gadi／jiadi da jinmai ..., Tib. ka ti gser gyi rtsa chen) located inside the central channel and linking this channel to the center of the heart;
(2) The White Silk Thread Vessel (Ch. baisixian mai ..., Tib. dar dkar skud pa) enclosed in the Kati Vessel and going through the Brahmå Cavity (Ch. fanxue ..., Tib. tshang bu). This is the path for the practice of transferring consciousness (Ch. powa ..., kaiding fa ..., Tib. ’pho ba);
(3) The Subtly Coiled Vessel (Ch. xixuan mai ..., Tib. phra la ’dril ba) located inside the four wheels of navel, heart, throat, and sinciput;
(4) The Crystal Duct Vessel (Ch. jingguan mai ..., Tib. shel sbug can), a synonym of the Vessel of the Far-reaching Water Lamp, is the channel which links the heart to the eyes and supports the manifestations of countless luminous spheres and bright strands (Ch. wushu mingdian lianxi guangming ...).
....."rDzogs-chen in China".......rDzogs-chen is Bon........Monica Esposito : "rDzogs-chen in China : from Chan to "Tibetan Tantrism"". In :- E’COLE FRANC,AISE D’EXTRE^ME-ORIENT, E’TUDES THE’MATIQUES 22 = Monica Esposito (editrix) : Images of Tibet in the 19th and 20th Centuries. 2 Voll., continuously paginated. Paris, 2008. pp. 473-548 (in 2nd Vol.). ......http://texts.00.gs/rDzogs-Chen_in_China.htm

"Ajna (Sanskrit: आज्ञा, IAST: Ājñā, English: "command") or third-eye chakra is the sixth primary chakra according to Hindu tradition......Ajna is white in color, with two white petals. Inside the pericarp is the Shakti Hakini. It is depicted with a white moon, six faces, and six arms holding a book, a skull, a drum, and a rosary, while making the gestures associated with granting boons and dispelling fears. The downward pointing triangle above her contains a moon-white lingum. In some systems the deity Ardhanarishvara, a hermaphrodite form of Shiva-Shakti, symbolising the primordial duality of subject and object, resides within the lingum. Above that triangle is another smaller triangle containing the bija mantra, Aum......Bija or Seed mantra: The seed syllable is Aum, or "Pranava Om," the supreme sound."....https://en.wikipedia.org/wiki/Ajna 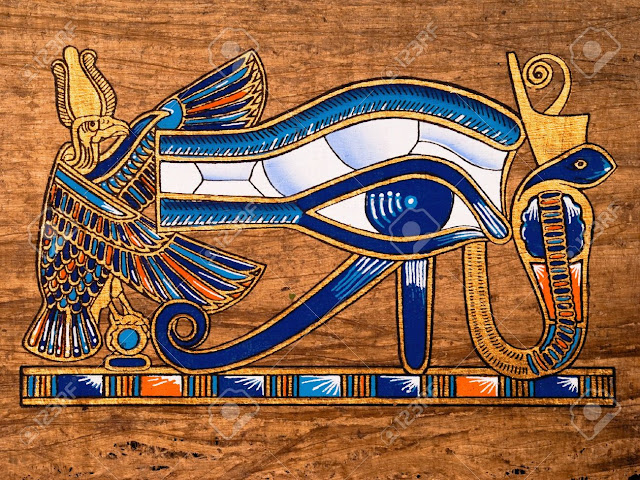 "The Eye Of Horus is an Egyptian symbol of protection, royal power and good health. Horus was the ancient Egyptian sky god who was usually depicted as a falcon, and his right eye was associated with the Sun God RA who ruled in all parts of the created world: The Sky, The Earth and The Underworld.....The Egyptians worshipped the Sun as the sun was seen as the ruler of all of creation. RA is always shown with a sacred sun disk on his head which represents enlightenment and connection to Divine Intelligence."