"Nurbakhshis (Islamic Sufi order) are found in Baltistan and Ladakh regions of Jammu and Kashmir as well......Local Muslims, who converted from Bön-po and Tibetan Buddhism still retain many traits of pre-Islamic Bön and Lamaist rituals, which makes Islam of Baltistan and Ladakh unique from other Muslim societies. Swastika (Yung drung) sign is considered auspicious and is carved on wooden planks that can be seen in historical mosques and Khankas. Showing respect to Lha and Lhu (Bön gods) is customary during many village rituals."......http://en.wikipedia.org/wiki/Balti_people

"Mosques in Baltistan are mainly built in the Tibetan style.....Small pockets of Bön and Tibetan Buddhist believers that amounted up to 3000 people are found in Kharmang valley of Baltistan and in West Kargil. East Ladakh (Leh district and Zanskar) are predominantly Buddhist. 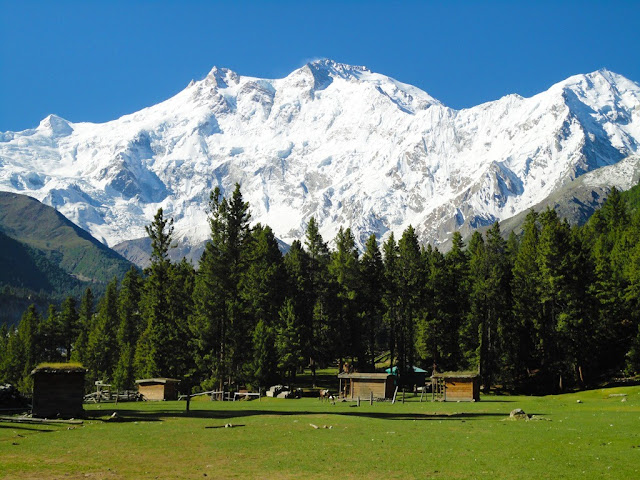 "Baltistan (Urdu:بلتستان, Balti: བལ་ཏི་སྟྰན), also known as Baltiyul (Balti: བལ་ཏི་ཡུལ་།), is a mountainous region in Pakistan.It is situated in the Karakoram mountains just to the south of K2, the world's second highest mountain. " 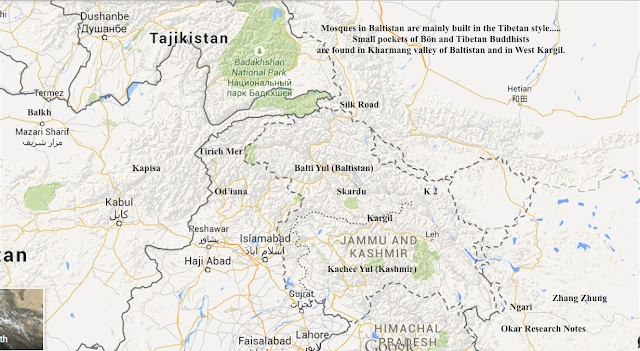 Kashmir.... Kashmir (Kachee Yul in ancient Tibetan).........."The Tibetan Muslims, also known as the Kachee (Tibetan: ཀ་ཆེ་, Wylie: ka-che; also spelled Kache), form a small minority in Tibet. Despite being Muslim, they are officially recognized as Tibetans by the government of the People's Republic of China, unlike the Hui Muslims, who are separately recognized. The Tibetan word Kachee literally means Kashmiri and Kashmir was known as Kachee Yul (Yul means Country)......Generally speaking, the Tibetan Muslims are unique in the fact that they are largely of Kashmiri as well as Persian/Arab/Turkic descent through the patrilineal lineage and also often descendants of native Tibetans through the matrilineal lineage, although the reverse is not uncommon. Thus, many of them display a mixture of Indo-Iranian and indigenous Tibetan facial features."....http://en.wikipedia.org/wiki/Tibetan_Muslims

"The appearance of the first Muslims in Tibet has been lost in the mists of time, although variants of the names of Tibet can be found in Arabic history books.... 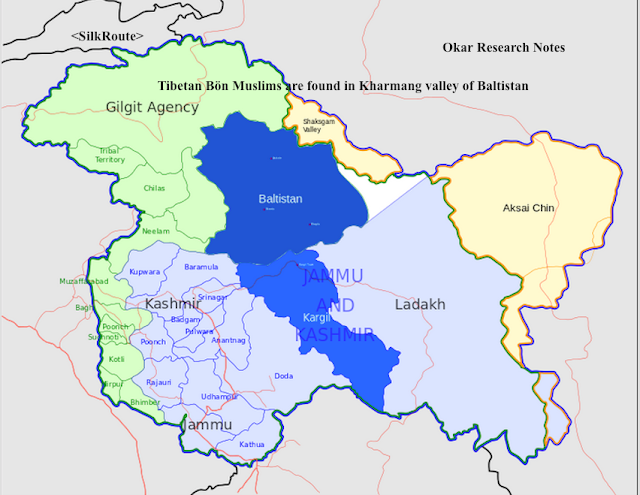 Baltis & Bolor......"Deep in the Karakorum mountains consisting of the arid river valleys of Skardu, Khapulo, Shigar, Rondu and Kharmang lies Baltistan or Baltiyul the historic junction of the Buddhist and Islamic world......European historians suggest that Bolor ( Gilgit and Baltistan) was once a centre of Bon shamanism, the indigenous religion of the High Himalaya and the original inhabitants of western Tibet, Ladakh and Baltistan were these very Aryans.....at one time this area had been under Tibetan, and later Ladakhi rule, the five main valleys of Baltistan ( Skardu, Shigar, Rondu, Khaplu and Kharmang) were more often principalities left to their own rule . The spread of Islam in the area can be traced to Rinchen (or Rinchana Bhoti), a Tibetan prince who ruled Kashmir from 1319-1323. Inspired by a Muslim sage, Bulbul Shah, Rinchen converted to Islam and changed his name to Sadruddin. By the late 1300s, Sufi preachers had begun to arrive from Persia, ushering in the Islamic era in Kashmir and Baltistan .....The inhabitants of Baltiyul living in the valleys of the Indus, the Shyok, and their tributaries, have cultural affinities that stretch from Lhasa to Tehran. The Baltis proudly still claim their pre-Islamic culture that has so much in common with Tibet and Ladakh that earned them the nickname of “Little Tibet “. .....http://www.hindukushtrails.com/tribes-baltis.php

"Balawaristan (Urdu:بلاورستان) is an historical name of Gilgit-Baltistan that has regained some prevalence in recent years. The archaic English spelling for the name was Boloristan, and its first known documented usage is in Chinese sources from the 8th century AD.Gilgit-Baltistan includes Gilgit, Skardu, Hunza, Ishkoman Puniyal and Yasin (see Districts of Gilgit-Baltistan). The regions of Baltistan, and Ladakh (including Kargil) are also considered to be a part of Balawaristan by nationalist parties of Gilgit, and sometimes Chitral is as well......The people of this region have historically been referred to as Balawars (or highlanders), which is said to have come from the term 'Bala', which means high, a reference to the high-altitudes prevalent in this area...... 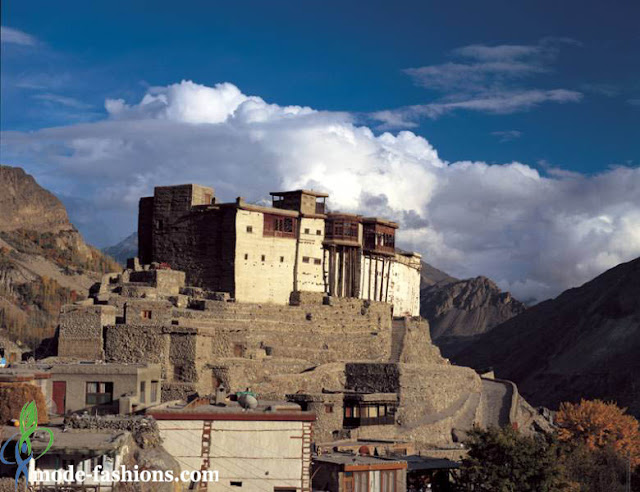 "The Shigar Fort, locally called the Phong Khar, or the fort on the rock, is a major tourist attraction in the Baltistan region, along with the towering mountains and vast glaciers....An interesting aspect of the Fort’s history is that symbols of various religious groups are engraved on its wooden beams at different locations inside the residential palace.....One of those symbols are being presented to show that the region which is now home to a 100 percent Muslim population was once heavily influenced in the past by other faiths and philosophy groups...".....http://pamirtimes.net/2015/03/13/9-fascinating-ancient-symbols-found-in-the-shigar-fort-baltistan/ 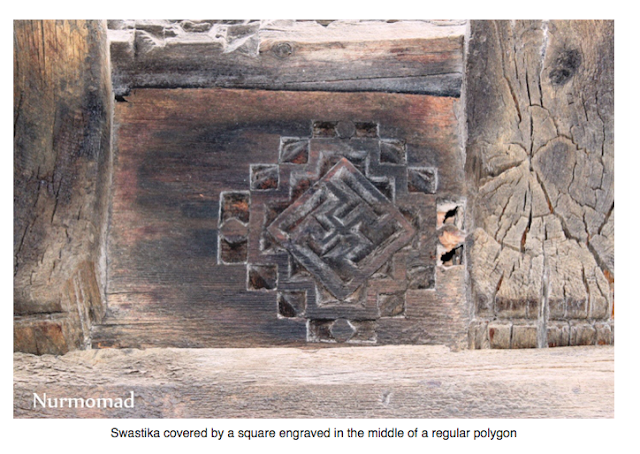 "Empress Jincheng might have viewed it as Emperor Songtsen-gampo had originally regarded Buddhism, would have been hostile toward the Arab cleric. They would have feared yet another foreign influence， it included only western Tibet. Let us leave aside the issues of the furthest extent of Zhang-zhungs borders，now turned Tibets military ambitions away from that direction and formed an alliance in 705 AD with the Turki Shahis in Gandhara and Bactria， Mangsong-mangtsen ，the ministers declared that the presence of the foreigners and their religious rites in Tibet had been the cause of the widespread epidemic. Gandhara was a reasonable destination for the monks since the Turki Shahis had also been the rulers of Bactria from which many of the monasics undoubtedly hailed. A large number finally settled in the mountainous region of Baltistan to the north of the Oddiyana portion of Gandhara. The power of this xenophobic faction culminated sixteen years later when， Zhang-zhung at one time also spanned the entire Tibetan plateau. At the time of its defeat， did not become an organized religion until after the eleventh century AD， where the Chinese emperor offered him support，but architectural evidence from the period indicate at least inevitably amount of cultural influence from Nepal at this time.".....2014-09-04 .... Editor ：Kmmvc-Divine Land......http://www.kmmvc.com/view-34156-2.html 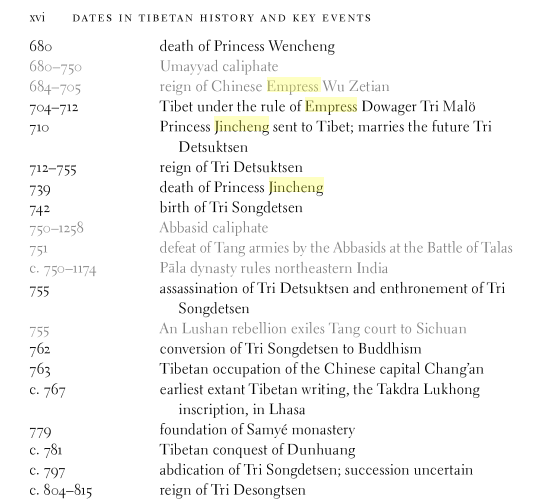