"Dru Gyalwa’s Practice Manual of the Experiential Transmission......consists of three major sections: Foundation Practices, Actual Practices, and Supplemental Practices. The Supplemental Practices include guidance on: View – the Basis, Meditation – the Path, Behavior – the Causal Conditions of the Path, and Result. These sections are then complemented with texts on the elimination of obstacles and texts on the practices of the dark retreat. The manual is then augmented with various practices for removing obstacles. It is concluded with instructions on the practice of dark retreat. Thus altogether there are five sections to the presentation of this teaching. What is most striking about Dru Gyalwa’s practice manual is its directness and clarity. The text is written as a detailed instructor’s guide for teachers in the tradition to teach their students. While the text is filled with beautiful and expansive quotes from the Twenty-one Nails and Six Lamps, the focus of the text is precise instruction on Dzogchen practice expressed in clear and direct language.".....http://rywiki.tsadra.org/index.php/The_Oral_Tradition_of_Zhang_Zhung 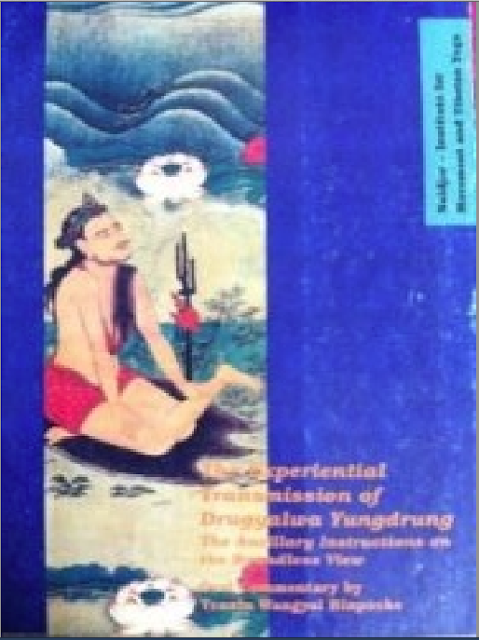 Bon has three principal streams of transmission of Dzogchen, and of these three the Aural Transmission of Zhang Zhung is considered to be the most profound. Drugyalwa Yungdrung wrote a practice manual for this system, and for over seven hundred years this has been the primary source of instruction on the practice of this system. Drugyalwa’s practice manual is quite extensive and contains instruction on preliminaries, actual practices of sky-gazing, sun-gazing and dark retreat, as well as four auxiliary sections which provide deeper instruction on view, meditation, action, and the result. This system culminates in the practice of the 49 day dark retreat, and a detailed instruction manual exists for those practices as well. It has been a rare opportunity to receive any of these teachings in either the east or the west and usually the instruction has been very abbreviated. Fortunately, Chaphur Rinpoche has agreed to carefully guide students through each of the sections of practice. Having taught the preliminaries, Chaphur Rinpoche now continues with instruction on the actual practices of the Aural Transmission of Zhang Zhung.

Druchen Gyalwa Yungdrung wrote a practice manual in which the number of sessions in retreat (thun mtsham) was further reduced to fifteen. This popular practice manual is known as the A-khrid thun mtsham bco-lnga-pa. And in the present century, the great Bonpo master Shardza Rinpoche wrote extensive commentaries on the A-khrid system, together with the associated dark retreat (mun mtshams). The A-khrid tradition, where the practice is very systematically laid out in a specific number of sessions, in many ways corresponds to the rDzogs-chen sems-sde of the Nyingmapa tradition.

The Experiential Transmission of Drugyalwa Yungdrung: " The Ancillary Instructions on the Boundless View...... Oral Commentary by Tenzin Wangyal Rinpoche" .... 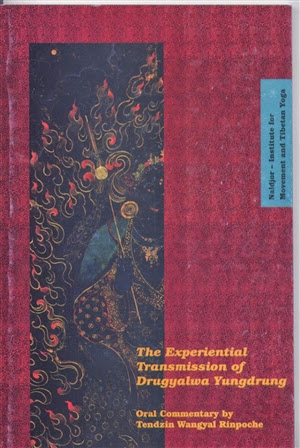 "The cycle of Atri, "the guide to A", one of the three main cycles of Dzogchen in the Yungdung Bön tradition. This spiritual treasure was discovered in XIth century by Meu Gongdzö Ritro chenpo, it was organized in eighty meditation sessions; in the XIIIth century, Dru Gyalwa Yungdrung reduced it to a fifteen-session meditative yoga . This practice is very popular among bonpo practitioners thanks to its clear approach; whoever implements it carefully, will experiment the recognition and the stabilization of the Natural State."......http://shenten.org/en/shenten-schedule/145-teaching-and-practice-retreat-on-the-cycle-of-atri

"Gyalwa Chaktri is a collection of texts composed by Dru Gyalwa Yungdrung, a great 13th century master, and forms a complete practice guide enabling us to apply directly the teachings of Zhangzhung Nyen Gyu, Yungdrung Bön’s most important Dzogchen cycle.Receiving these instructions helps start straight down the meditative practices of this tradition."......http://www.dharmawheel.net/viewtopic.php?f=85&t=4451

"The Fifteen Stages of Practice That Guide One to the Primordial State ....Teachings by Tenzin Wangyal Rinpoche from the A-tri tradition of Dzogchen
May, 2013, Berkeley, CA
A-Tri (A-Khrid), literally “The Guidance of the Primordial State” is one of the three principal Dzogchen (Great Perfection) traditions within Bön. It was founded in the 11th century by Ritro Chenpo (1038-1096), known simply as “the holy man,” who systematized previous teachings and added his own mind-treasures to create a succession of eighty practices. These were later organized into thirty sessions and finally during the 13th century condensed into a practice manual of fifteen sessions by the renowned lama Drugyalwa Yungdrung.
In 2012, Tenzin Wangyal Rinpoche offered teachings and practice instructions from Drugyalwa’s text “The Fifteen Stages of Practice that Guide One to the Primordial State,” focusing on the preliminary practices to ripen consciousness. In this teaching he will begin the instructions on the main practices to liberate the ripened mind-stream. You do not have to have attended the previous teachings in order to join this series. Everyone is welcome. Tenzin Rinpoche will continue these teachings on November 15-17, 2013.".....http://www.ligminchaofcalifornia.com/north.html