"Local Drokpa believe that Takzik Nordzong is one of the fortresses of Tiger Leopard King of Wealth (Takzig Norgi Gyelpo), an invader who is supposed to have come from the northwest (Indo-Iranic borderlands or Central Asia). He is thought to have conquered major portions of western Tibet in early times. According to the Gesar epic, Takzig Norgi Gyelpo was one of the main adversaries of King Ling Gesar........ Gesar is said to have come to the region to battle his adversary Takzig Norgi Gyelpo..... "....Antiquities of Zhang Zhung by John Vincent Bellezza ....Tibetan & Himalayan Library Copyright © 2010 .....http://www.thlib.org/bellezza/#!book=/bellezza/wb/b1-1-3/

"Around 2,500 Drokpas live in three small villages in a disputed territory between India and Pakistan. The only fertile valley of Ladakh. The Drokpas are completely different– physically, culturally, linguistically and socially – from the Tibeto-Burman inhabitants of most of Ladakh.".........http://www.beforethey.com/tribe/drokpa

"The Dard people are an ethnic group found predominantly in northern Pakistan, north west India and eastern Afghanistan. They speak mainly Dardic languages. The largest populations are in the regions of Gilgit–Baltistan and Khyber Pakhtunkhwa. Dards, known as Brokpa, Drokpa and Shin, are also a minority in Ladakh, which is part of Indian administered Jammu and Kashmir......Parpola (1999) identifies "Proto-Dardic" with "Proto-Rigvedic", suggesting that the Dards are the linguistic descendants of the bearers of proto Rigvedic culture ca. 1700 BC, pointing to features in certain Dardic dialects that continue peculiarities of Rigvedic Sanskrit, such as the gerund in -tvī (p. 189)......During Swati rule, the Dard people predominantly followed the Kalash religion and frequent small-scale jihad against Dards may have been a routine.".......https://en.wikipedia.org/wiki/Dard_people#cite_ref-censusofindia2001_1-0


"Tiger Leopard Jewel Fortress is located at the confluence of the Ronggyü and smaller Fortress Valley (Dzonglung) valleys, neither of which has any contemporary permanent settlement. The ancient stronghold consists of two light-colored limestone formations that stand side by side. Their upper flanks are crisscrossed by defensive walls. From the higher west summit, which rises 70 m above the confluence, there are excellent views of the Ronggyü river valley. The serpentine defensive walls were established at various elevations along the precipitous south side of the twin limestone formations. The extensive random-work, probably dry-stone defensive walls are built of slabs of stone up to 1 m in length. The level areas created behind the ramparts must have functioned as temporary living and working quarters, as well as for defense. By circumscribing the limestone mounts with walls, the defenders were able to move around in relative ease and could direct their salvos accordingly. Like Sky Fortress (A-48), the walls of Tiger Leopard Jewel Fortress are highly eroded and there can be little doubt regarding their antiquity. There are also a number of minor archaeological sites in the Fortress Valley valley."..........http://www.thlib.org/bellezza/#!book=/bellezza/wb/b1-1-3/#ixzz3eXrwrQr8

"In Fortress Valley (Dzonglung) there are a number of minor ceremonial structures, which like the rampart network, must have been part of the erstwhile permanent settlement of the locale. There is ample water and plenty of drama brush here. On the south side of the mouth of the Fortress Valley, opposite Tiger Leopard Jewel Fortress, there are the remains of a double-course slab wall engulfed by drama brush.".........http://www.thlib.org/bellezza/#!book=/bellezza/wb/b1-1-3/#ixzz3eXtKCEGa

"Gesar is mentioned in a Khotan text, the Tibetan Li-yul-lun-bstan-pa, ("Prophecy of the Li Country") of the 9th-10th century, recent opinion identifies the land .... with the Kushan territories of Gandhāra and Udayana.…. " 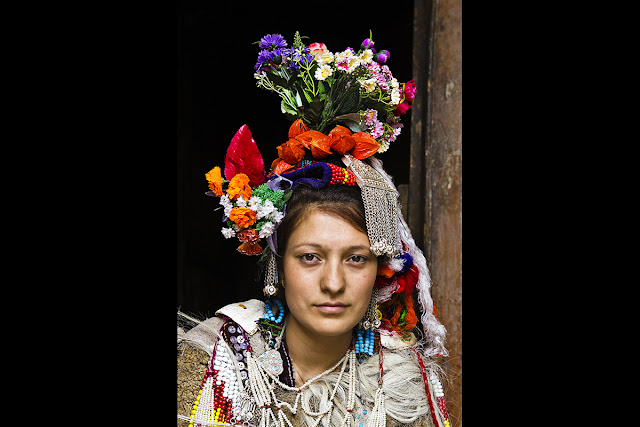 "Aryan........At the confluence of the rivers Shayok and Indus in the Kargil region west of Leh live the people known as Drok-pa. They are racially and culturally distinct from the rest of Ladakhis. The villages of Dha and Hanu are situated at a distance of approximately 163 km to the northwest of the town of Leh. In this area, you will find a number of villages. However, tourists are allowed to visit the villages of Dah and Hanu only. Being situated on a lower altitude, these villages experience a climate that is a little warmer than that of Leh. One of the major attractions of Dha and Hanu is a chance to have a glimpse into the life of the Drokpa community. Dhahanu is situated to the south west of Leh, around 163 Kms. passing through the beautiful villages of Kaltsey, Domkhar, Skurbuchan and Achinathang. There are many small villages but only two villages of Dha and Hanu are open for tourist. Tourism in Dhahanu, Ladakh, is still not so popular and a tour takes only two days, with the nights being spent in tents."......Kalpana Chatterjee's website.........http://kals.megashot.net/ 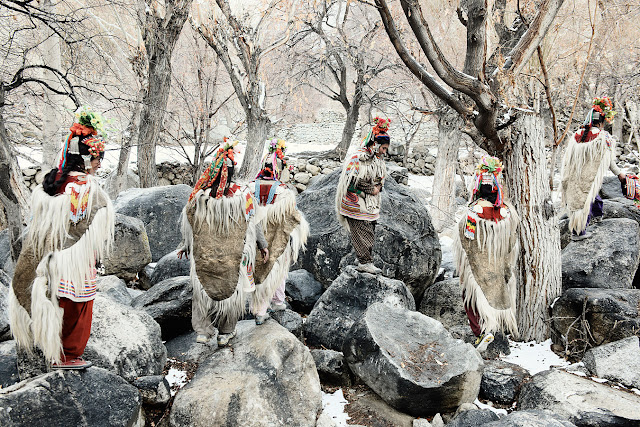 Dropa......The Brogpa are a small community of Dard people residing in the Dha-Hanu valley about 163 km southwest of Leh in Ladakh. They are thought by some to be the purest descendants of the ancient Indo-Europeans......They are also scattered in other parts of Ladakh. Part of the community are also located in the Deosai plateau just across the LOC in the Baltistan. Like the people of Gilgit, they speak an archaic form of the Shina language unintelligible with other dialects of Shina. They are originally said to have come from Chilas and settled in the area generations ago. They are predominantly caucasoid in contrast to the Tibeto-Burman inhabitants of most of Ladakh. They are nominally Buddhist, however animist and Bön rituals still survive.....http://www.beforethey.com/tribe/drokpa?photo=4

"Shin is a pre-Islamic tribe from the Hindu Kush, spread throughout the Indus Valley in Kohistan, extending as far North as Baltistan, Pakistan.......Of the Shin names a great number have the suffix of Sing, which is retained in spite of the conversion of the people to Islam. These named are never found among the purely Boorish population of Hunza and Nager, but it is to be noted that the Suffix Sing is found among the earlier Makpon Kings of Iskardo. The suffix is local version of Hindu Surname Singh which coms from Sanskrit word Simha meaning Lion. It is generally used by Rajputs or Kshatriya ruling class.......one can find such names which were used in prehistoric period. This shows that these Dards are the linguistic descendents of regvedic culture. besides, innumerable Sanskrit words are found, such as Bakhuni, shish mukh, achikot, maran, suri, rajju, drusht, jar, jarat, pachak. According the local Dard historians, a band of seven brothers migrated from Dardistan, probably either from Dasu or from Chilas. These Aryan brothers marched towards Deosai Plateau and reached Karkit. By finding there suitable pastures and water resources they decided to settle there. This happened probably in the seventh or eighth century. Today their descendents are found here in the thousands.....Ceder worship is prevalent among all historic Hindu communities of Himalayas from Hindu Kush region to Himachal and Uttarakhand. It is known as Deodar derived from Sanskrit word Devadaru, which means "wood of the gods", a compound of deva (god) and dāru (wood, etym. tree). The Cedar is also sacred in Kafiristan."......https://en.wikipedia.org/wiki/Shin_of_Hindukush