"Surkh Kotal is an archaeological site in the southern region of ancient Bactria containing a 2nd century AD fire temple believed to have been built by the Kushan emperor Kanishka I (Kanishka the Great), whose statue was found within the temple."

"Built on the top and side of a hill, the temple complex would have been a imposing site, before its destruction, towering over the vast valley plains below. It was accessed by a long flight of steps leading to a stairwell, above which was a monumental stairway some fifty five metres high, rising in four flights, flanked by four terraces, to the temple on top of the hill.....The stairs led to a temple containing a 11m. x 11m. sanctuary - a cella - in which there was a platform flanked by four columns, and on which rested a fire altar".......http://www.heritageinstitute.com/zoroastrianism/balkh/balkh2.htm 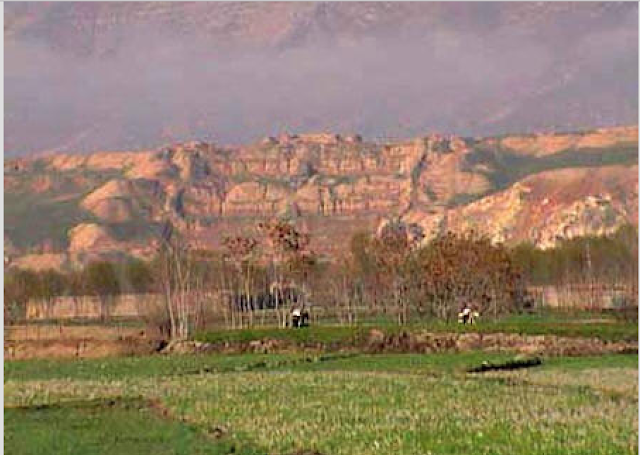 Surkh Kotal seen from afar.........Note the wide terraces leading to the top 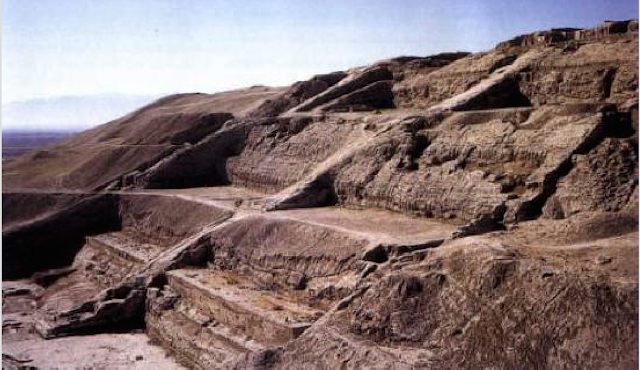 "Surkh Kotal (Persian: سرخ‌کوتل‎; Pashto: سور کوتل‎), also called Chashma-i Shir or Sar-i Chashma, is an ancient archaeological site located in the southern part of the region of Bactria, about 18 km north of the city of Puli Khumri, the capital of Baghlan Province of Afghanistan. It is the location of monumental constructions made during the rule of the Kushans. Huge temples, statues of Kushan rulers and the Surkh Kotal inscription, which revealed part of the chronology of early Kushan emperors (also called Great Kushans) were all found there. The Rabatak inscription which gives remarkable clues on the genealogy of the Kushan dynasty was also found in the Robatak village just outside the site. 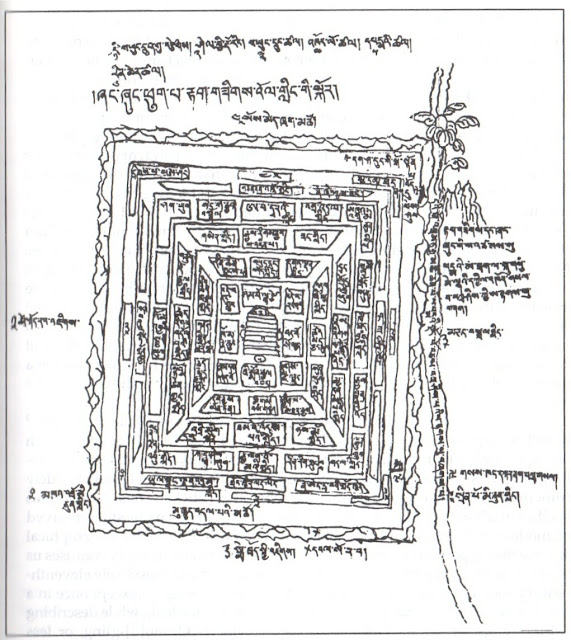 ".....The innermost division made up of Nine Stacked Svâstika Mountain and the surrounding groves......spoken by the Teacher Gshen-rab-mi-po (i.e., Lord Shenrab) at a ‘perfection of Place’ (gnas phun-sum-tshogs-pa),......’Ol-mo-lung-ring is, as many later sources say, in some way identical with Stag-gzig, we see that Stag-gzig is to the west of Tibet, and is bordered by the smaller areas of Gilgit and Yavana (Bactria). ......At the center is Nine Stacked Svâstika Mountain, surrounded by four groves: Happiness Grove [Dga’-ba’i Tshal], Jewel Grove [Rin-chen Tshal], Lotus Grove [Padma’i Tshal], and Man-made Grove [Skyed-mo Tshal]. It was apparently the central mountain surrounded by groves (or parks or formal gardens) that initially inspired Kuznetsov to identify the map with the Persian Empire, since he believed that the mountain (which appears on the woodblock printed map as nine stepped levels, each composed of seven or five svâstikas; on the drawn map, it looks rather like a beehive) surrounded by gardens was reminiscent of the tomb of Cyrus the Great at Pasargadae........’Ol-mo-lung-ring, it could very well encapsulate cultural memories of the area to the west of Tibet and on the fringes of Persia, a place where Buddhism was long known and practiced..... Although its explicit identification with Shambhala, more correctly Sambhala, appears only rather late in Bon literature (see the appendix), there are a few general and specific features, even in the earlier texts, that would suggest their similarity.[108] ’Ol-mo-lung-ring was and is all these things, but at the same time it was a place on the ground that we can indeed roughly locate, through text-based historical geography, in the area between Ladakh/Kashmir and the Oxus River. ....’Ol-mo-lung-ring, the Original Holy Place...by Dan Martin

"Mount Yungdrung Gutseg (gYung-drung dgu-brtsegs), the 'Pyramid of Nine Swastikas'. .....At the base of Mount Yungdrung Gutseg spring four rivers, flowing towards the four cardinal directions. The mountain is surrounded by temples, cities and parks. To the south is Barpo Sogye (Bar-po so-brgyad) palace, where Tonpa Shenrab was born. To the west and north are the palaces where Tonpa Shenrab's wives and children lived. To the east is Shampo Lhatse (Sham-po lha-rtse) temple. The complex of palaces, rivers and parks with Mount Yungdrung Gutseg in the centre constitutes the inner region (Nang-gling) of Olmo Lungring. The intermediate region (Bar-gling) consists of twelve cities, four of which lie in the four cardinal directions. The third region includes the outer land (mTha'-gling)."......Wonders of the Natural Mind: The Essence of Dzogchen in the Native Bon Tradition...Page 43 ...By Tenzin Wangyal

"The site of Surkh Kotal, excavated between 1952 and 1966 by Prof. Schlumberger of the Délégation Archéologique Française en Afghanistan, is the main site excavated of the Kushan Empire. Some of the site's sculptures were transferred to the National Museum of Afghanistan (also known as the 'Kabul Museum'), the rest of the site was completely looted during the Afghan Civil War. The most famous artifacts of this site are the Surkh Kotal inscriptions, the statue of King Kanishka and the fire altar. The statue of the king was destroyed during the Taliban wave of iconoclasm in February–March 2001, but has been restored by French conservationists. The three artifacts are currently on display in the Afghan National Museum.

"Surkh Kotal is in the predominantly Tajik northern Afghan province of Baghlan, about 20 miles southwest of the town of Baghlan and 11.5 miles north of the provincial capital of Pol-i Khomri, on the road to Mazar-e-Sharif (Balkh). It is also known as Atashkadeh-ye Sorkh Kowtal.

"Kanishka’s empire was vast. It extended from southern Uzbekistan and Tajikistan, north of the Amu Darya (Oxus) in the north west to Northern India, as far as Mathura in the south east. His territory also included Kashmir, where there was a town Kanishkapur, named after him not far from the Baramula Pass and which still contains the base of a large stupa, a mound-like structure containing relics." 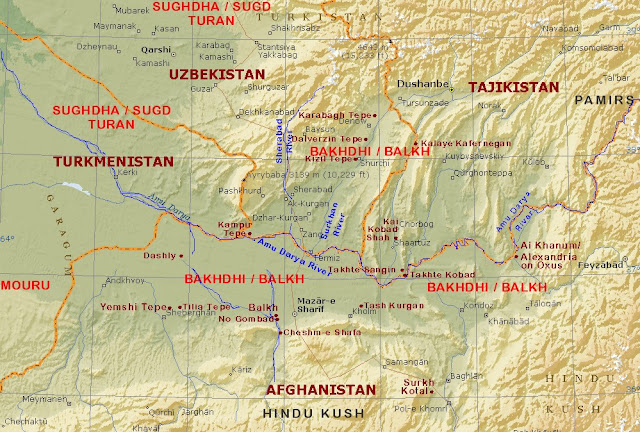 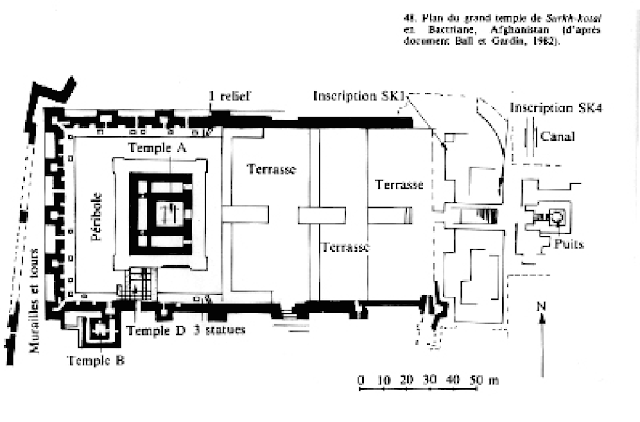 "The excavations at Surkh Kotal and the problem of Hellenism in Bactria and India"......Author: Daniel Schlumberger........Publisher: London. (1962) 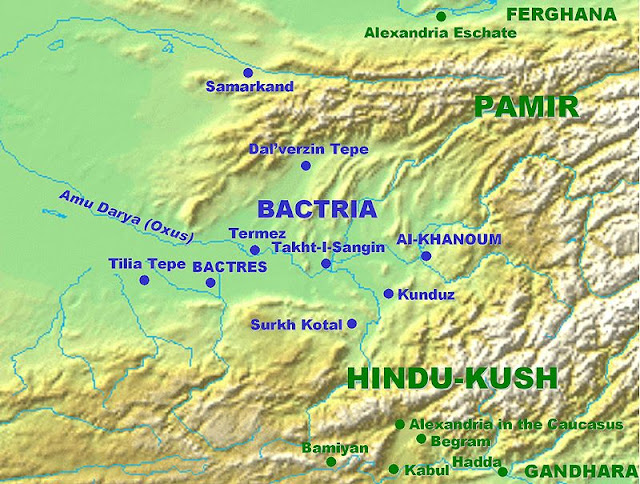 "Surkh Kotal is a famous archaeological site of the Kushan period, located in southern Bactria, to the west of the road between Pul-e Khumri , Robatak, Samangan and Mazar-e Sharif. The site was excavated during the 1950s and ‘60s under the direction of Professor Daniel Schlumberger from the Strasbourg University, who was then director of the DAFA. The site is located on a natural headland facing east thus dominating the plain. At the summit of the site, a temple was built on a podium surrounded with a portico. One had access to this cultural en- semble by the means of three immense terraces connected to one another by monumental stairs composed of more than one hundred steps each, and by way of a ramp of about 150 m. The buildings are built in dried earth but with a white limestone facing. Sev- eral mutilated statues of Kushan kings were discovered; one of them identified as representing King Kanishka. The cult celebrated in the great temple A is still subject to discussion. However, the two later temples B and D are designated, rightfully so, as sanctuaries for the sacred fire."........http://www.archaeological.org/pdfs/papers/AIA_Afghanistan_address_highres.pdf

"The looting of the Archaeological Heritage of Afghanistan does not limit itself to these few sites proposed by Mr. Feroozi. One should also mention the sites of the regions of Herat, Maymana, Balkh, Samangan, Qunduz, Bakhshan, Takhar; the mountainous regions of the center of Afghanistan such as Bamiyan,Yakaoling, further south, Panjshir, Kohestan (es- pecially Khom e- Zargar), Kapissa, Begram, Kabul, Jalriz, Maydan Shahr, Kandahar, Helmand, Seistan. And let us not forget the Eastern regions such as Jalalabad (especially Hadda for its beautiful Buddhist monasteries, excavated by the French and Afghans, Dr. Chaibai Mustamandy and Dr. Zemaryalai Tarzi), Kunar, Laghman (especially Khoguiani), Patchir, and Agam, etc. These sites of which I mention only few, have been subjected to ille- gal excavations by local commanders for the past twenty some years, before the Taliban, during the Taliban, after the Taliban, and are still being looted today."..........http://www.archaeological.org/pdfs/papers/AIA_Afghanistan_address_highres.pdf