"Bagolago is a Bactrian term.....the Bagolago at Mat (Mathura)......equivalent Prakit term 'devakula' appears in the inscriptions....the Mat site is one of three certain complexes (others are Surkh Khotal and Rabat) which are part of the same sort of ritual activity....There may be many more similar sites....as many as eight sites.......There is no way for certain what a Bagolago was....The sites have several features in common. They are not public spaces...have an association with water...had erections of both Kings and Gods....unclear if the kings attended the gods or vice-versa......there served some dynastic purpose but terms such as 'dynastic shrine' or 'dynastic cult' may be too strong....the presence of the Bagolago at Mat emphasizes the importance of Mathura....Mathura was the capital of Surasena which the Kushans ruled....http://www.academia.edu/2078818/The_Mint_Cities_of_the_Kushan_Empire

" The meager remains of Bactrian so far described are usefully supplemented by some identifiable Bactrian loanwords in other, better-known languages. As well as words already attested in Bactrian (e.g., Pers, xidēv < Bactr. xoadēo “lord,” Kroraina Prakrit personal name Vaǵamareǵa < bago “god” plus marēgo “servant”) these include some new vocabulary".....bagolaggo [-ŋg] “temple”),..... most of the “Bactrian” legends are virtually identical in vocabulary and phraseology to their Pahlavi equivalents. A legend such as bago pirōzo oazarko košano šauo “Lord Pērōz, great Kušānšāh” may be compared with the Pahl.....http://www.iranicaonline.org/articles/bactrian-language

"..... 'devakula' in Mathura we will return to this type of site later. ..... the only Jain Stupa known from the period; and most important, the Bagolago at Mat."

"Kanishka...........SHAR had many meanings in the ancient cultures of the Near East, it meant both celestial bodies and master. UONONKCHE, which can be also read as VONONTE, was the name of a number of historical personalities - for example the Parphian king Vonones, its successor Vonones, the second name or more exactly - the title of the conqueror of Bactria - the Kushan ruler Kanishka, called Uanando Bagolago. All names stem from the epithet Vanand ('victorious, presented with the grace of the Gods'), which is of very ancient origin with roots in the Sumero-Accadian and from there in the Sanskrit culture. Since the eastern Iranian languages replaced "o" with "a" (which is also characteristic to the modern Mundjan and Tadjik languages), in Old Parphian this epithet was pronounced as VONONES, while for the Kushans - as UANAND.. ".....http://ashrafonline.net/vb/showthread.php?p=316003

نصف الأبجدية الهركليفية 14/28 اكتشفت من طرف العلماء العرب في ... ......The best example is a stamp of Tervel, where next to the face of the ruler are ... the conqueror of Bactria - the Kushan Ruler Kanishka, called Uanando Bagolago....http://ar.cyclopaedia.net/wiki/Kushan_Ruler 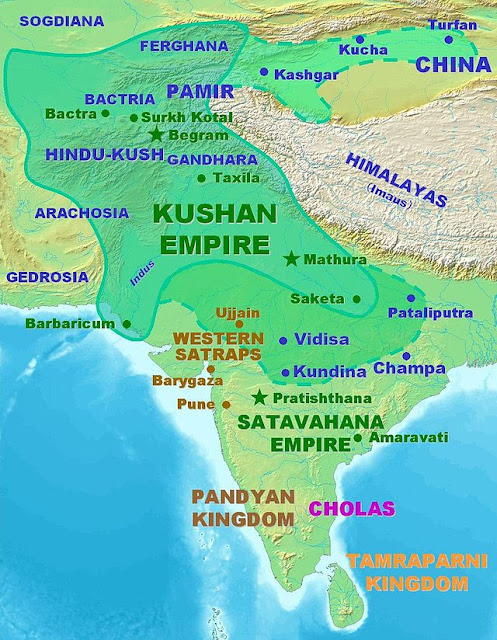 "Kanishka I (Sanskrit: कनिष्क; Bactrian: Κανηϸκι, Kaneshki; Middle Chinese: 迦腻色伽 (Ka-ni-sak-ka > New Chinese: Jianisejia), or Kanishka the Great, was the emperor of the Kushan dynasty in 127–151 AD.....famous for his military, political, and spiritual achievements. A descendant of Kushan empire founder Kujula Kadphises, Kanishka came to rule an empire in Bactria extending from Turfan in the Tarim Basin to Pataliputra on the Gangetic plain during the Golden Age of the Kushanas. The main capital of his empire was located at Puruṣapura in Gandhara (Peshawar in present Khyber Pakhtunkhwa, Pakistan), with two other major capitals at ancient Kapisa (present Bagram, Afghanistan) and Mathura, India. His conequests and patronage of Buddhism played an important role in the development of the Silk Road, and the transmission of Mahayana Buddhism from Gandhara across the Karakoram range to China."

Iranian/Indic phase.....Following the transition to the Bactrian language on coins, Iranian and Indic divinities replace the Greek ones: ΜΑΝΑΟΒΑΓΟ (manaobago, Vohu Manah ).......Vohu Manah is the Avestan language term for a Zoroastrian concept, generally translated as "Good Purpose" or "Good Mind" (cognate with Sanskrit vasu manas), referring to the good moral state of mind that enables an individual to accomplish his duties. 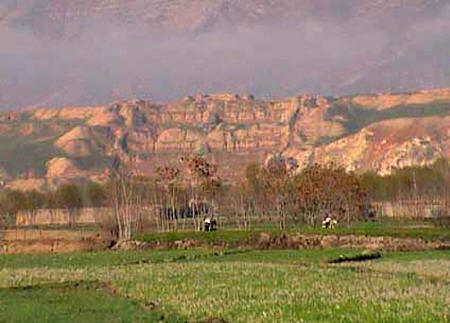 Surkh Kotal...... 36.03N, 68.55E......."That Surkh Kotal was a major site of direct importance to the Kushan dynasty is beyond doubt. It is the site of a bagolago, a dynastic shrine associated with the period from Wima Kadphises to Huvishka........http://www.kushan.org/sources/coin/sites.htm......Ball, 1982: no.1123 ....Ball, W (1982) Archaeological Gazetteer of Afghanistan, Catalogue des Sites Archaeologiques D'Afghanistan. 2 Volumes. 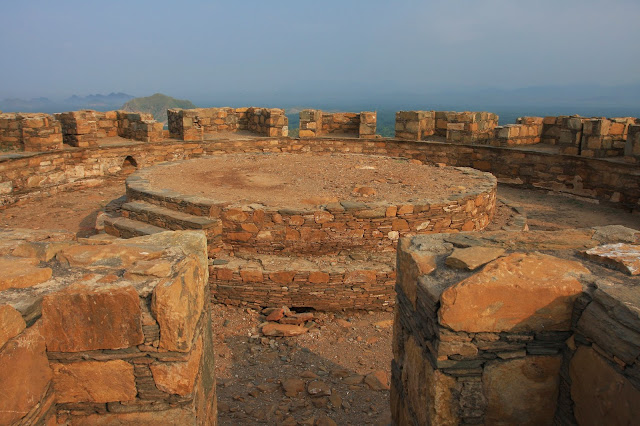 "Jamal Garhai is ancient Gandharan site located 13 kilometers from Mardan in Khyber Pakhtunkhwa province in northern Pakistan. Jamal Garhi was a Buddhist monastery from the first until the fifth century AD at a time when Buddhism flourished.....The most remarkable find in Jamal Garhi is the circular stupa situated on high ground to the west of the main clump of edifices. The stupa is surrounded by a ring of cubicles that may have either served as shrines housing images of Buddha or prayer chambers for the devout. The superior stonework and symmetry of the stupa are notable..... The Central Asiatic Kushans, originally fire worshippers, had embraced Buddhism and followed their new faith with the customary zeal of recent converts. In fact, Huvishka’s predecessor, the great Kanishka, is commemorated to this day for his ardent pursuit of ordering some of the most monumental stupas ever to be raised...........http://odysseuslahori.blogspot.com/2014/10/Jamal-Garhi.html

"It seems that the Kushans, upon becoming masters of Bactria, at first continued the traditional use of Greek as a medium of written communication. As a spoken language they had adopted Bactrian, the native idiom of the country, which they afterwards elevated to the status of a written language and employed for official purposes, perhaps as a result of increasing national or dynastic pride. The earliest known inscriptions in Bactrian (the “unfinished inscription” from Surkh Kotal, cf. A. D. H. Bivar, BSOAS 26, 1963, pp. 498-502, and the Dašt-e Nāvūr trilingual) belong to the reign of Vima Kadphises. A few decades later, early in the reign of Kanishka I, Bactrian replaced Greek on the Kushan coins. After this period Greek ceased to be used as an official language in Bactria (although later instances of its use by Greek settlers are known, cf. P. M. Fraser, Afghan Studies 3-4, 1982, pp. 77f.)."....http://www.iranicaonline.org/articles/bactrian-language 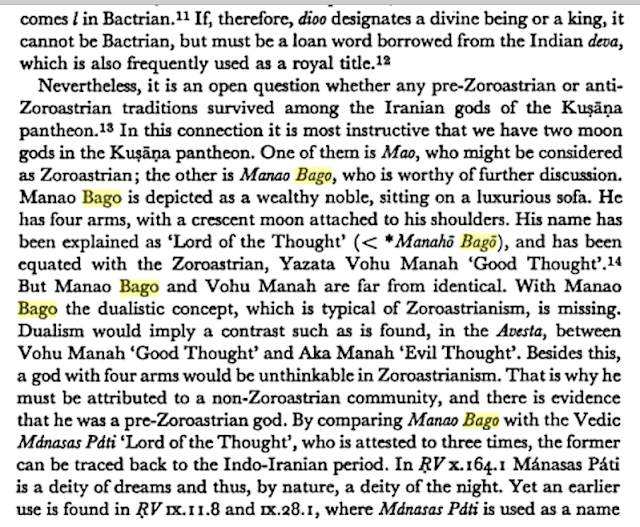