"Bagram (بگرام Bagrām), founded as Alexandria on the Caucasus and known in medieval times as Kapisa, is a small town and seat in Bagram District in Parwan Province of Afghanistan, about 60 kilometers north of the capital Kabul. It is the site of an ancient city located at the junction of the Ghorband and Panjshir Valley, near today's city of Charikar, Afghanistan......The location of this historical town made it a key passage from Ancient India along the Silk Road, leading westwards through the mountains towards Bamiyan." 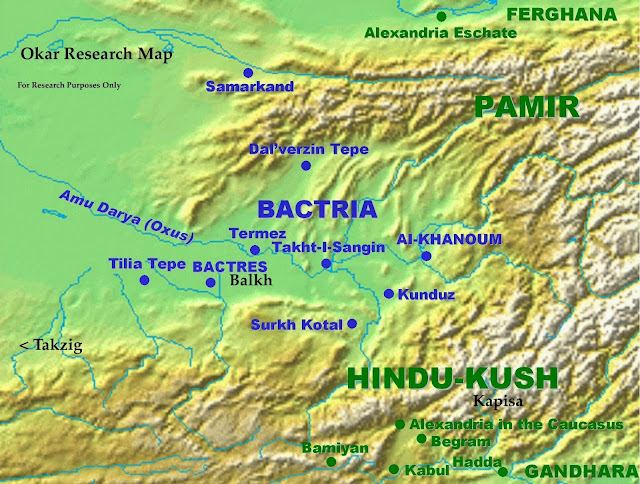 "By 669 AD, the neighboring Turkish Shahi kingdoms of Kapisa (Shambhala) and Uddiyana were also both being hard pressed on their southwesterly flank by the inexorable expansion of the southern Arab Moslems."….http://www.dharmafellowship.org

Begram ... Alexandria of the Caucasus (320 BC)....."It is unknown when the site was originally settled. In the mid 500s BC, Cyrus the Great of the Persian Achaemenid Dynasty destroyed the city as part of his campaign against the Saka nomads in the region. The town, however, was soon rebuilt by his successor Darius I......around 1500 BC the country became populated by the Indo-Aryans moving in from the west. Afghanistan doesn’t enter written history until around the 6th century BC, when it became part of the Achaemenid Empire of Cyrus the Great. The Persians were the world’s superpower of the time, and Afghanistan was divided into satrapies – Ariana (Herat), Arachosia (Kandahar), Bactria (Balkh) and Gandhara (the Kabul Valley).....The Cambridge Ancient History, Volume 10 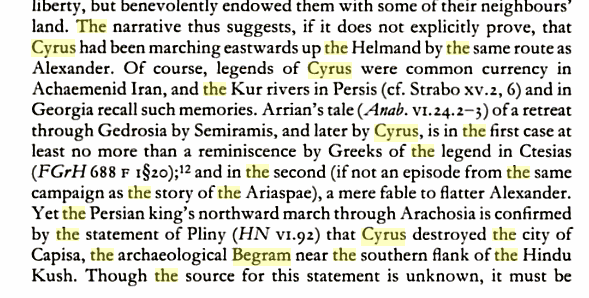 "In the 320s BC, Alexander the Great captured the city and established a fortified colony named Alexandria of the Caucasus. The new town, laid out in the "hippodamian plan" or iron-grid pattern—a hallmark of Greek city planning, had brick walls reinforced with towers at the angles. The central street was bordered with shops and workshops......in 334 BC Alexander the Great launched a huge campaign against Darius III. Just 24 years old, Alexander’s military genius quickly conquered the Mediterranean coast and the Achaemenid capital at Persepolis in modern Iran. His kingdom in ruins, Darius fled to Afghanistan where he was betrayed by the Bactrian satrap Bessus, who in turn proclaimed himself king. Alexander was outraged and led his army deep into Afghanistan, sweeping through the south before crossing the Hindu Kush and driving Bessus towards the Oxus (Amu Darya). He captured Bactria and Bessus, who was executed for his resistance......Afghanistan got deep into Alexander’s blood. He took his bride Roxanne in Balkh, and founded Bagram as a base for his invasion of India....Further north, Ai Khanoum on the Oxus, the easternmost Greek city in the world was a place of gymnasiums and theatres performing the Greek tragedies, temples to the old gods and groves of olive trees."

"After his death in 323 BC, the city passed to his general Seleucus, who traded it with the Mauryans of India in 305 BC. After the Mauryans were overthrown by the Sunga Dynasty in 185 BC, the Greco-Bactrian Kingdom invaded and conquered northwestern India (present-day Pakistan) with an army led by Demetrius I of Bactria. Alexandria became a capital of the Eucratidian Indo-Greek Kingdom after they were driven out of Bactria by the Yuezhi in 140 BC. 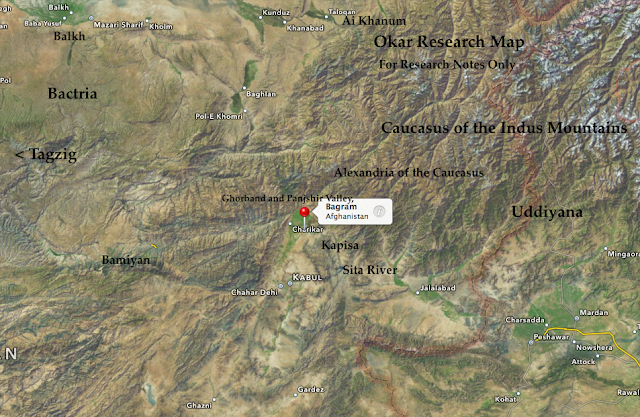 ".......the Kingdom of Uddiyana was divided between two countries, to the North and South. To the North, it bordered on the land of Shambhala (i.e., the Kingdom of Kapisa),"......….http://www.dharmafellowship.org

"Bagram became the capital of the Kushan Empire in the 1st century, from here they invaded and conquered Peshawar in the south...it was the Yueh-chih in 130 BC that had the greatest impact, when they united under the name of the Kushans. The Kushans soon settled, and took the best traditions from the Graeco-Bactrians and the Indians to fuse them with the free-spirited nature of the steppe. In doing so they created a unique culture that ruled Afghanistan for five centuries. The new kingdom was ideally placed to exploit the burgeoning trade along the Silk Road. From AD 128, the visionary King Kanishka built two capitals at Kapisa (modern Bagram) and Peshawar, forging an empire whose influence travelled as far as the Ganges. Kushan art, also known as Gandharan art, was a vibrant blend of Classical, Indian and Persian styles, and was hugely influential. The kingdom was the first to represent the Buddha in human form, a style it sent to Kashmir, Tibet and China. Monasteries thrived in Balkh, Kandahar, Bamiyan, Samangan, and Hadda near Jalalabad." 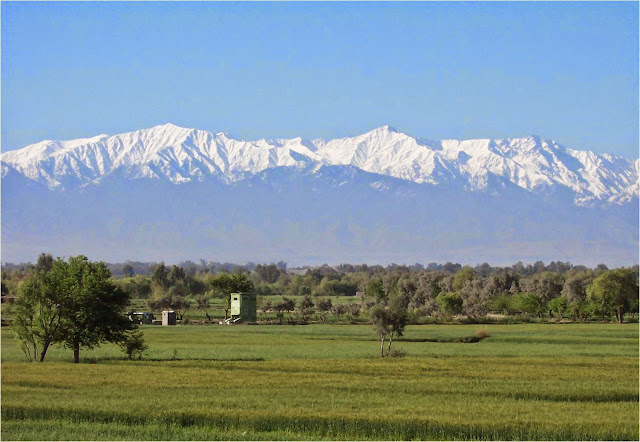 "Caucasus Indicus Mountains....."In the time of Alexander the Great, the Hindu Kush range was referred to as the Caucasus Indicus or the "Caucasus of the Indus" (as opposed to the Greater Caucasus range between the Caspian and Black Seas).......Hindū Kūh (ھندوکوه) and Kūh-e Hind (کوهِ ھند) are usually applied to the entire range separating the basins of the Kabul and Helmand rivers from that of the Amu River (ancient Oxus), or more specifically, to that part of the range lying northwest of the Afghan capital Kabul. Sanskrit documents refer to the Hindu Kush as Pāriyātra Parvata (पारियात्र पर्वत)......Some sources state that the term Hindu Kush originally applied only to the peak in the area of the Kushan Pass, which had become a center of the Kushan Empire by the 1st century AD. This mountain range was also called Paropamisadae by Hellenic Greeks in the late first millennium BC."......."Hindu Kush Mountains.....Britannica

"The "Bagram treasure" ....... Bagram was a great city in ancient times. In the 1930s, French archaeologists found an astonishing cache of items there. .....Among the objects was a Roman toy aquarium made of bronze, in which metal fish would float, waggling their fins, when it was filled with water.....Glass beakers from Bagram are painted with figures resembling Pompeian frescoes. Most remarkable were a series of ivory carvings resembling the styles of southern India.....The Bagram treasures make the point that Afghanistan is a point of cultural interchange, where currents from India, Europe, China, Iran, Central Asia and the Middle East all met. Even more startling, historically, are the finds from Ai Khanum, a Greek colony founded around 300 B.C. by one of the successors of Alexander the Great. Following his conquests, for over a century a Greek empire covered much of the territory of modern Afghanistan."......British Museum Exhibition Catalogue

"Cyrus the Great...... In the Bīsotūn inscrip­tion, Darius mentioned among the countries of the Persian empire Drangiana, Areia, Choresmia, Bactria, Sogdiana, Gandhara, Sattagydia, and Arachosia .....As Darius’ predecessor, Cambyses II, had fought no wars in the east, Persian rule must already have been extended to Central Asia and the northwestern limits of India in the time of Cyrus. The fortified settlement of Cyreschata (“city of Cyrus”), or Cyropolis, in Sogdiana is further evidence of Cyrus’ activity in the region ....Pliny (Naturalis Historia 6.92) reported that Cyrus destroyed Capisa, in northern Afghanistan, and Arrian mentioned both his attack “on the land of the Indians” (apparently Gandhara) and his subjuga­tion of the people of the Ariaspai along the southern borders of Drangiana......According to both Herodotus.... and Berossus, this conquest of the Central Asian territories took place after the defeat of Lydia in 547 B.C.E. but before the Persian advance on “Assyria” (i.e., Babylonia) in 539 B.C.E.".....http://www.iranicaonline.org

"CAPISA (Κάπισα or Κάτισα, Capissa), a city of a district probably named after it, CAPISSENE and included in the wider district of the Paropamisus or Hindu Kush mountains. According to Pliny, it was destroyed by Cyrus; but we have no reason for supposing that Cyrus ever got so far NE., and, if it had been, it would hardly have been noticed by Ptolemy. It is probably the same as the Caphusa of Solinus (100.54), which was near the Indus. It has been suspected that Capissene represents the valley of the Kábul river, and Capisa the town on the Indus now called Pesháwar. It is not Kábul, which has been satisfactorily proved by Professor Wilson to occupy the site of the ancient Ortospanum. .....Lassen finds in the Chinese annals a kingdom called Kiapiche in the valley of Ghurbend, to the E. of Bamian. It is very probable that Capisa and Kiapiche are identical.".....Dictionary of Greek and Roman Geography (1854) ......William Smith, LLD, Ed. 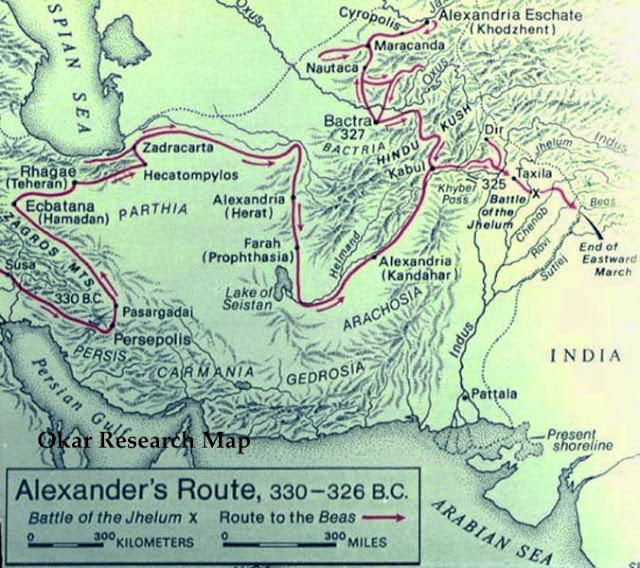