Uddiyan od bhava.....bhava (not bhāva) is the continuity of life and death.....Sanskrit: bhāva, 'state, condition'......When Buddha was dying, his last utterance in this world was,'APPO DEEPO BHAVA' -- 'Be a light unto yourself.' .....bhav(a): mental attitude, feeling, purity of thought..... 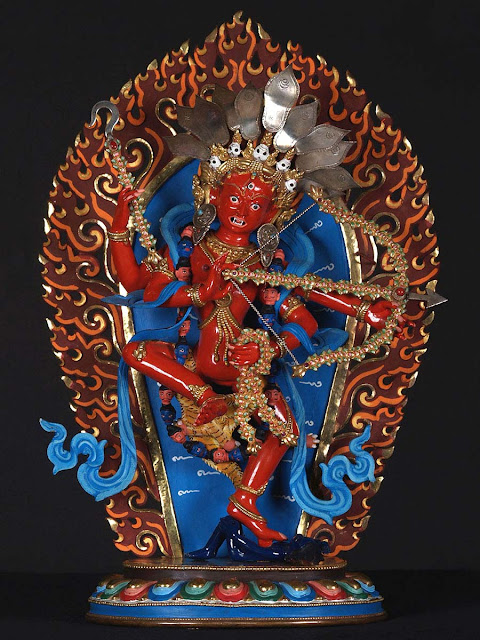 "Buddhaguptanatha (1514-1610 ?)...about 1580 AD Buddhaguptanatha locates Urgyan (Uddyana) in Ghazni, about 50 miles south of Kabul in modern Afghanistan, which is in contrast with the traditional location of Urgyan in the Swat area......Tāranātha (1575–1634) gives a detailed description of the country and Dumasthira, the capital city of Uddyana....the focal location of the magic dakini women.........Buddhagupta describes the women of Uḍḍyāna as being of the various types of ḍākinīs, all posessing different types of magical abilities.".... They are powerful in their exercise of mantras and they know how to both help and hinder with them. They are skilled in adopting various physical forms and they have the ability to work with the mystic gaze.....They displayed various magical abilities involving birds and my master, Buddhaguptanatha, saw these miracles with his very own eyes and he told me of them. He said that previously when he was in Upper Hor [Muslim territories]… he was fully protected by the mantras that he had received from those dakinis in Urgyan, as well as by his own physical powers. Urgyan is surrounded to the east, the south and the west by three large lakes. When he crossed over the pass he came into the Hor Mleccha land of Balkh [northern central area of modern Afghanistan]......"Buddhaguptanatha and the Late Survival of the Siddha Tradition in India D Templeman

"Kurukullā is possibly an Indian tribal deity who was assimilated by Buddhists. She became associated with Tārā and is sometimes called Red Tārā. Incidently she was also adopted into the Hindu pantheon. In many ways she is similar to the ḍakiṇī figures such as Vajrayoginī. ....Kurukullā is particularly associated with the Red Rite, the Tantric Rite of Fascination or Subjugation (vaśikaraṇa). She is red in colour, dancing on a red lotus and as Lokesh Chandra says "she beams with love in all the freshness of youth". The Red Rite is on the mundane level associated with attracting lovers, and on the transcendental level relates to the Sameness Wisdom of Amitābha. Her seed syllable hrīḥ emphasises her relationship to Amitābha. There are some variations in her iconography but she is always shown with a pulled back bow and arrow both covered in flowers. The flowery arrow will remind westerners of Cupid, the Roman equivalent of the Greek Eros, who is depicted as a cherub who goes about shooting people with arrows that make them fall in love. She also often holds an elephant goad and a noose, both of which are used to help to subjugate lovers. ....http://www.visiblemantra.org/kurukulla.html

"Kurukulla Abhisheka.....Sakyong Mipham Rinpoche has invited Kurukulla into the Shambhala mandala as an adornment for this stage in the community’s growth. A retinue practice, the Kurukulla Sadhana is done incidentally, at times when we need to enact a karma to benefit the world or to increase the effect of that activity within our life. The Sakyong wishes for his students to make a personal relationship with the Kurukulla sadhana, but there are no mantra requirements nor is there a number of sessions to do...... The Kurukulla abhisheka is open to practitioners who have established the Werma Sadhana as their main practice for more than one year. It is also open to all Vajrayogini sadhakas in the Shambhala mandala who have a connection to the Sakyong..... Kurukulla is a well-known dakini, or female wisdom deity, in the Tibetan and Indian tradition. She is a central figure associated with the activity of magnetizing people, wealth, and energy to virtuous dharmic endeavors. Kurukulla practice has a specific role to play in our community: to draw people with a connection to warriorship to Shambhala. The Werma and Shambhala Sadhanas will remain the central liturgical practices in the Shambhala tradition, and the Kurukulla sadhana will play the role of a "retinue practice" ­- assisting the community’s primary purpose of creating enlightened society......Kurukulla belongs to the padma family of deities, which includes Amitabha, Avalokiteshvara, Padmasambhava, Hayagriva, and the other deities mentioned in Jamgön Mipham Gyatso’s short chant entitled Great Clouds of Blessings: Supplication for Magnetizing the Phenomenal World, which is practiced daily at our land centers. Often she’s referred to as Padmadakini, which reflects her connection to the padma family and is her name when she manifests as one of the four wisdom dakinis in the retinue of Vajrayogini. Her name in Tibetan is Rikchéma (rig byed ma), which literally means ‘she who gives knowledge’."......http://www.karmecholing.org/program.php?id=5315

"Kurukulla was likely an Indian tribal deity associated with magical domination. She was assimilated into the Buddhist pantheon at least as early as the Hevajra Tantra, which contains her mantra. Her function in Tibetan Buddhism is the "red" function of subjugation. Her root tantra is the Arya-tara-kurukulle-kalpa (Practices of the Noble Tara Kurukulla)..... It was translated by Ts'ütr'im jeya, a disciple of Atiśa."....Shaw, Miranda (2006). "Kurukulla: Red Enchantress with Flowered Bow". Buddhist Goddesses of India. Princeton University Press.

"One Buddhist Dakini originating from the country of Uddiyana is the goddess Kurukulla. The name Kurukulla is translated into Tibetan as Rigjyedma (rig-byed-ma), “she who is the cause knowledge.” She is associated with a king of Uddiyana named Indrabhuti...... there exists a sadhana text attributed to him for the red Kurukulla......she is generally known as the Uddiyana Kurukulla. Most modern scholars believe this indicates that Kurukulla was originally a tribal goddess, much like the Hindu goddess Durga had been in India, who later, because of her popularity, became associated with the Buddhist great goddess Tara. For this reason, Kurukulla is often called the Red Tara (sgrol-ma dmar-po) or Tarodbhava Kurukulla, “the Kurukulla who arises from Tara.”......KURUKULLA: The Dakini of Magic and Enchantments by John Myrdhin Reynolds

"Gods and goddesses are frequently described with objects of power known as "attributes." Often, they are depicted wielding weapons. ....One of the 12 Nidanas, or "links of dependant arising," on the outer ring of the Wheel of Existence depicts a man pierced through the eye by an arrow. This imagery symbolizes the power of our senses as vectors of attraction (and also, repulsion.) The hum of the nearly invisible swift-flying arrow does not afford any warning, and the accomplished archer can let loose a multitude of death- dealing points in a single encounter. Gods whose domains are the realm of the senses all wield the bow. Consider Artemis and Eros (Diana and Cupid, to the ancient Romans,) Kama the Hindu god of desire, and the Buddhist deity, Kurukulla. ".....http://www.khandro.net/mysterious_objects.htm

"......her association with the magical function of enchantment (dbang gi ‘phrin-las) or the bewitching of people in order to bring them under one’s power (dbang du bsdud). More than any other figure in the Buddhist pantheon, Kurukulla becomes the Buddhist goddess of love and sex, corresponding to the Western gooddesses Aphrodite and Venus. She is depicted as a voluptuous and seductive nude sixteen year old girl. Among the attributes she holds in her four hands, four arms being her most common manifestation, are the flower-entwined bow and arrow, reminiscent of the Western Eros and Cupid, although as the goddess of witchcraft, she is more akin to Diana.".....http://vajranatha.com/teaching/Kurukulla.htm

"....the chief canonical source for the goddess, found in the Tantra section (rgyud) of the Kangyur, is the Arya Tara Kurukulla Kalpa (‘Phags-ma sgrol-ma ku-ru-ku-lle’i rtog-pa), “The Magical Rituals for the Noble Tara Kurukulla.” This text was translated into Tibetan by Tsultrim Gyewa, a Tibetan disciple of the great Indian master Atisha (982-1054). ".........http://vajranatha.com/teaching/Kurukulla.htm

"There is also a two-armed white form of Kurukulla known as Shukla Kurukulla in the Sadhanamala (No.185). She has a single face that is calm and beautiful and the Buddha Amitabha adorns her crown. Her two hands hold a mala or rosary and a bowl full of lotus flowers. Her two legs are in vajrasana position.......in Hinduism for her name is found among the one thousand epithets of Mahadevi in the Lalita-sahasra-namah. She is represented as a dancing beautiful maiden or kumari. "...........http://vajranatha.com/teaching/Kurukulla.htm 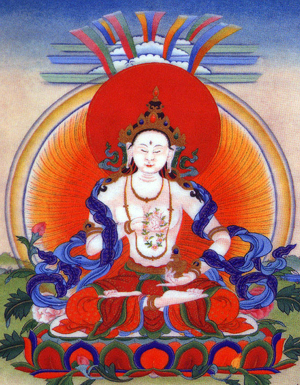 "The Hevajra Tantra, a yoginītantra of the anuttarayogatantra class, is believed to have originated between the late 8th and the late 9th or early 10th centuries......another lineage, mentioned by Kongtrul, goes from Vilāśyavajra to Anangavajra to Saroruha and thence to Indrabhuti."....https://en.wikipedia.org/wiki/Hevajra

"The Goddess Kurukulla is invoked for the controlling activities of subjugating, magnetizing, and attracting. She is extremely seductive: her red color and subjugating flower-attributes emphasize her more mundane activity of enchanting men and women, ministers and kings, through the bewitching power of sexual desire and love (Skt. vashikarana). ".....http://www.bhsmc.org.tw/en/node/276

"...an interesting Dakini... she shoots flowers and is another form of TARA : Kurukulla, the "Enchantress"......deity in Hindu and Buddhist Tantra who is often invoked in works of subjugation, enchantment and magnetising people to you. Her name is Kurukulla (pronounced "Koo-roo-koo-lay" according to Jason Miller). In Buddhism she is an aspect of Tara who is often called the "Red Tara" and is considered the heart of Tara herself. In Hindu Tantra she is said to contain the energies and presence of the Mahavidyas Tara, Tripura Sundari (in her maiden form as "Bala Tripura Sundari") and Matangi. She is the combined energy of these three goddesses. Many Tantriks also believe that she is an aspect of the Mahavidya Chinnamasta. The *Lalita Sahasranama Stotram* mentions her name as one of the many names of the goddess Lalita Tripurasundari and in the Sri Vidya Tradition she is associated with the energies of the Full Moon. The Tantraraja Tantra gives a theory of 15 Lalita Nityas which are energy rays of the goddess Lalita connected with the lunar phases and Tara Kurukulla is said to be the mother of these energies. In the Shaktisamgana Tantra she is the fourth Nitya and a mantra is given for her......."Kuru means "harsh sound," and kulla means "family." ......http://www.dorjeshugden.com/forum/index.php?topic=2149.10;wap2