"Gendün Chöphel (Tibetan: དགེ་འདུན་ཆོས་འཕེལ, Wylie: dge 'dun chos 'phel) (1903–1951) was a Tibetan artist, writer and scholar. He was born in 1903 in Rabkong, Amdo. He was a creative and controversial figure and he is considered by many to have been one of the most important Tibetan intellectuals of the twentieth century......Gendün Chöphel was a friend of Rahul Sankrityayan. His life was the inspiration for Luc Schaedler's film The Angry Monk: Reflections on Tibet and The Madman's Middle Way: Reflections on Reality of the Tibetan Monk Gendun Chophel. He is best known for his collection of essays called Grains of Gold: Tales of a Cosmopolitan Pilgrimage, written during his time in India and Sri Lanka in between 1934 and 1946. These essays were critical of modern Hinduism, Christianity, and British imperialism. While condemning places and events like the Black Hole of Calcutta and the Goa Inquisition, he praised certain British colonial practices like the abolition of sati.".....Wiki 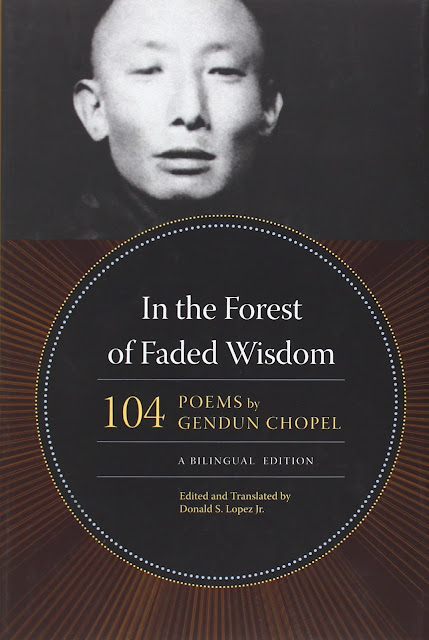 "Gendün Chöphel assisted the French scholar Jacques Bacot in the translation of several Dunhuang manuscripts from the Tibetan dynastic period. In these pages he read songs of the ancient Tibetan kings; these songs would inspire some of the poems in his unfinished history of early Tibet, the White Annals (Deb ther dkarpo)."......http://www.wisdom-books.com/ProductExtract.asp?PID=19454

"In recent history, there has been no more famous Tibetan poet than Gendun Chopel (Dge 'dun chos 'phel, 1903-1951). He attracted acclamation and excoriation over the course of his short and controversial life, But both his devoted advocates and his bitter adversaries agreed on one thing: he was a consummate poet. In a culture where poetry is considered the highest form of human language, Gendun Chopel is revered as Tibet's greatest modern poet.".....http://www.wisdom-books.com/

"... H.E. Gyaltsab Rinpoche told me the story of a Buddhist teacher who was described in a historical treatise by Gendun Chophel. There was once a yogin (Rinpoche never gave the name) who wandered through Afghanistan and some of what is now Iran, and after some time started to teach. According to Rinpoche, this very realized teacher interchanged Buddhist philosophical terms such as Dharmakaya and nature-of-mind with Allah when he taught as a means to appeal to his audience. The sensitivity and depth of his teachings were eventually recognized by an elder Sufi teacher who came to name this Buddhist as his successor. "......Buddhism, Islam, and appearance....http://ganachakra.com/tag/buddhagupatnatha/........Repa Dorje Odzer (Justin von Bujdoss) is the Co-Founder and Co-Executive Director of New York Tsurphu Goshir Dharma Center, the North American Dharma Center of His Eminence Goshir Gyaltsab Rinpoche.

"Gendun Chopel began to publish articles questioning traditional Tibetan views on history, world geography, and the origin of Tibetan writing. He wrote bitingly satirical poetry aimed at his compatriots, with quite some self-mockery thrown in as well. He studied Sanskrit with Indian pandits, and met several Western Tibetologists, becoming the first Tibetan scholar to study the ancient historical manuscripts from the Tibetan Empire (7th-9th century) found in the Central Asian oasis of Dunhuang, just three decades previously. He consulted with a Chinese researcher in Kalimpong, and translated parts of the Tang Annals into Tibetan, as a source of comparison.".......http://www.treasuryoflives.org/biographies/view/Gendun-Chophel/P219

"In India Gendun Chopel, who had most likely given up his monastic vows before leaving Tibet, composed his own commentary on the Art of Love, based on several classical Sanskrit sources, as well as his own experience. He also smoked heavily and drank, and wrote a long sad poem of exile. ".........http://www.treasuryoflives.org/biographies/view/Gendun-Chophel/P219

" .....he went to live for two years with the family of the Russian painter and explorer Nicolas Roerich (1874-1947) at their avant-garde Urusvati Institute in Kulu–Manali. There he assisted Nicolas' son George (1902-1960) with the English translation of the Blue Annals (deb ther sngon po) by Go Lotsāwa Zhonnu Pel ('gos lo tsa ba gzhon nu dpal, 1392-1481), one of the major Tibetan historical works, reading through and discussing the entire text with him. The result of their fruitful collaboration was a book of some 1275 pages, published in Calcutta, in 1949."..............http://www.treasuryoflives.org/biographies/view/Gendun-Chophel/P219

"The Roerichs were ardent supporters of the peoples of Central Asia, being especially enthused by the Mongol-Tibetan Buddhist alliance. The father, Nicolas, was a famous artist who had designed the costumes and scenery for the first performance of Igor Stravinsky's seminal production, The Rites of Spring, staged in Paris in 1913, with Nijinsky as choreographer, and Diaghalev as impresario. In Kulu, the close-knit family held open house to Mongolian pilgrims and travelers. During his stay in Kulu, Gendun Chopel is said to have read widely, including, Sufi mysticism, Russian orthodox Christianity, and possibly some Western philosophers."..............http://www.treasuryoflives.org/biographies/view/Gendun-Chophel/P219

"Gendun Chopel gained an intimate knowledge of Sanskrit poetry by translating into Tibetan Kãlidasa's classic play, Sakuntalã, several chapters of the Bhagavad Gitã, and portions of the Hindu epic the Rãmãyana, and he read the devotional poetry of Tulsidã. He is also said to have translated Dariçlin's Mirror of Poetry from Sanskrit into Tibetan, although this work was lost. He assisted the Russian Tibetologist George Roerich in the translation of the important, and unreadable, fifteenth-century history of Tibetan Buddhism, the Blue Annals ."....http://www.wisdom-books.com

"Gendun Chopel was a familiar figure in Kalimpong, where he went to escape the hot summers, and to work with Tharchin Babu in his Mirror Printing Press, helping with the Tibetan language Mirror newspaper, where several of his articles were published. In the 1940s, Kalimpong – the gateway between India and Tibet – became a hotspot for exiled political figures from the Land of Snows. Gendun Chopel fell in with radical Tibetans who were working for the future of what they called the ‘Real Tibet', and who were advocating immediate reforms, or even the overthrow of the Ganden Podrang (dga' ldan pho brang) government of the Dalai Lamas. These included Baba Puntsok Wangyel ('ba' ba phun tshogs dbang rgyal, b. 1922), Changlochen Kung Sonam Gyelpo (lcang lo can kung bsod nams rgyal po, b. 1898), and Rabga Pomdatsang (rab dga' spom mda' tshang), to name but the most well-known. Gendun Chopel joined them...".....http://www.treasuryoflives.org/biographies/view/Gendun-Chophel/P219

"He visited and made studies of most of the important Buddhist archaeological sites in India, writing a guidebook that is still used by Tibetan pilgrims today. And he studied Sanskrit erotica and frequented Calcutta brothels, producing his famous sex manual, the Treatise on Passion ('Dod pa'i bstan bcos), written entirely in verse."..........http://www.wisdom-books.com/ProductExtract.asp?PID=19454

"Once back in Lhasa, Gendun Chopel was courted by all and sundry for his knowledge of the outside world, and for his new ideas with regard to Tibet. The progressive families amongst the nobility supported him and provided for his frugal needs. He was consulted on every subject, and began to teach grammar and art to a number of notable individuals, including two Nyingma lamas, Lachung Apo (lha chung a pho, 1905-1975) and Dawa Zangpo (zla ba bzang po, 1916-1958). At the same time he began to put together his research notes gathered over twelve years of study and exploration, and to write a political history of Tibet, his unfinished White Annals (deb ther dkar po). His celebrity piqued the interest of the British representative in Lhasa, Hugh Richardson (1905–2000), who began to take even greater notice of the person he named “Chopel-la.” Richardson had both a professional and personal interest in the Amdo scholar, for he knew – more or less – about the political maneuverings of the progressive Tibetans in Kalimpong, and had also developed, in the latter years of his sojourn in Lhasa, a strong interest in ancient Tibetan history. He knew of Chopel-la's excellent reputation among the Western Tibetologists with regard to this new and exciting area of study."......http://www.treasuryoflives.org/biographies/view/Gendun-Chophel/P219

"In 1946, a violent confrontation erupted between two Dalai Lama regents, the Fifth Reting, Tubten Jampel Yeshe Tenpai Gyeltsen (1912-1947) and the Third Taktrak, Ngawang Sungrab Tutob (1874-1952)..... Gendun Chopel became a target for ecclesiastical extremists and conservative nobles. He was arrested, whipped, and falsely accused of producing fake banknotes, of being a communist spy, and of being paid by the Guomindang, among other things. He was thrown into prison, first at Nangtseshak (snang rtse shag), the city court of Lhasa and the central jail, and then at Shol (zhol) at the foot of the Potala Palace. His research materials written during twelve years of exile in India were stolen and never returned."....http://www.treasuryoflives.org/

"After his release from a Tibetan prison a couple of years later, either in 1949 or 1950, he re-established himself as a scholar. He was given a flat on the Barkor, just south of the Jokhang, a yearly stipend, with the order to resume work on the White Annals, which he did not do. There he lived with a woman from Chamdo and began to teach once again. He also started to drink much more heavily than usual, although it is said that he remained lucid and unaffected by the alcohol. The teachings he gave to his Nyingma student, Dawa Zangpo, on Nāgārjuna's Madhyamaka philosophy, became the basis for Gendun Chopel's great philosophical work, the Adornment for Nāgārjuna's Thought (klu sgrub dgong rgyan). "........http://www.treasuryoflives.org/biographies/view/Gendun-Chophel/P219

"Jamphel Yeshe Gyaltsen.....the one-time regent of the present (14th) Dalai Lama. He was forced out of office and was succeeded in the beginning of 1941 by Taktra Rinpoche. He died in 1947 in the prisons of Lhasa's Potala....His jailor also allegedly reported that his testicles were bound and beaten until he died of the pain.....Defenders alleged that his imprisonment was partly the result of his attraction to the teachings of the Nyingma lineage, a politically sensitive orientation."...Gyatso, Lobsang. Memoirs of a Tibetan Lama Snow Lion Publications. Ithica: 1998. Page 235

"In September 1951, Gendun Chopel watched through heavy eyelids from the rooftop of his apartment on the Barkor, as the advance guard of Chinese soldiers from the People's Liberation Army walked the streets of Lhasa, and he knew that his hopes and those of the progressive Tibetan intelligentsia had been dashed to the ground. He said of himself, ‘a priceless lapis lazuli vase has been dashed against a stone.' He and all his dreams for a future Tibet, integrated into the modern world yet retaining its own cultural identity and history, were broken. The next month Gendun Chopel developed severe edema, possibly a result of cirrhosis of the liver. He died in the middle of October, 1951."..........http://www.treasuryoflives.org/biographies/view/Gendun-Chophel/P219