King Sophagasenus & The Kapisa Valley (206 BC)

"Sophagasenos also spelt Sophagasenus or Sophagasenas (Sanskrit: Subhagasena) was a local King ruling in Kabul and Kapisa valley (Paropamisade of the classical writings) during the last decade of 3rd century BC..... Sophagasenus finds reference only in "The Histories" of Polybius. The identity of Sophagasenus is not clear. Many historians believe that Sophagasenus was a princely scion of the Mauryas of Magadha but others believe him to have been a non-Mauryan local ruler from the area he ruled i.e. from Kabul/Kapisa land. ....." 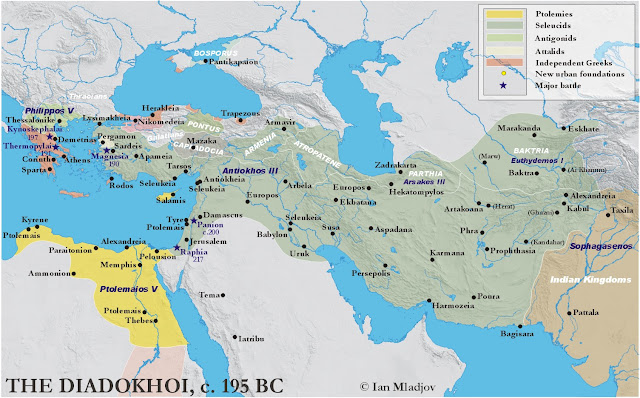 "The Diadochi (Greek: Διάδοχοι, Diadokhoi, meaning "Successors") were the rival generals, families and friends of Alexander the Great who fought for control over his empire after his death in 323 BC. The Wars of the Diadochi mark the beginning of the Hellenistic period......."Ian Mladjov's Resources......diadokhoi195nbc.jpg.......https://sites.google.com/a/umich.edu/imladjov/home

"We do not know who the Sophagasenus was. "After Asoka's death ( 304–232 BC)...... the interest of his successors, west of Indus must have disappeared because when later on (~206 BC), Antiochus III, 6th successor of Seleucus entered the Indus valley, he was resisted not by Mauryas but by a local ruler named Subhagasena..." . One quite agrees with Dr Thapar, Dr Rawilson and other scholars as quoted above that the ancestry of Sophagasenus is unclear and uncertain and in no can it be linked to Maurya rulers of Magadha on the basis of flimsy and unreliable evidence of Taranatha who is a careless and untrustworthy writer of comparatively recent times.....http://www.liquisearch.com/sophagasenus/differing_opinions_on_the_antecedents_and_ancestry_of_sophagasenos

"Tāranātha (1575–1634) was a Lama of the Jonang school of Tibetan Buddhism. Taranatha was born in Tibet, supposedly on the birthday of Padmasambhava. His original name was Kun-dga'-snying-po, the Sanskrit equivalent of which is Anandagarbha. However, he adopted Taranatha, the Sanskrit name by which he was generally known, as an indication of the value he placed on his Sanskrit scholarship in an era when mastery of the language had become much less common in Tibet than it had once been. He was also paying homage to his Indian teacher, Buddhaguptanatha.... His best known work is the 143-folio History of Buddhism in India of 1608,which has been published in English. His other major work, The Golden Rosary, Origins of the Tantra of the Bodhisattva Tara of 1604 has also been translated into English.....

"...the story of Taranatha and one of his teachers named Buddhaguptanatha. .......Buddhaguptanatha (1514-1610? AD) was an Indian Buddhist yogin who also held and practiced several Hindu yogic traditions. Taranatha apparently discovered this fact while Buddhaguptanatha was in the midst of bestowing a series of empowerments that he himself had received from his guru, Shantigupta. Taranatha was particularly challenged by the idea that his teacher also practiced Hinduism. Sensing his student’s sectarian reaction Buddhaguptanatha became upset and abruptly left Tibet leaving the series of empowerments incomplete. It is humbling that even for a teacher as great as Taranatha, the notion of “pure” Buddhism being mixed with Hinduism was a challenge- that on some level his own sense of distinction got the better of him. ".....http://ganachakra.com/tag/buddhagupatnatha/.....Repa Dorje Odzer (Justin von Bujdoss) is the Co-Founder and Co-Executive Director of New York Tsurphu Goshir Dharma Center, the North American Dharma Center of His Eminence Goshir Gyaltsab Rinpoche.

"Polybius, the Greek historian, makes reference to Sophagasenus in context with Antiochus III’s expedition across the Caucasus Indicus (Hindu Kush Mountains) in around 206 BC. Having crossed the Caucasus Mountains, Antiochus moved up to Kabul and met Sophagasenus the King with whom he renewed league and friendship he had made previously. and received more elephants until he had one hundred and fifty of them altogether. He then returned home via Arachosia, Drangiana and Karmania. No other source except Polybius makes any reference to Sophagasenus." 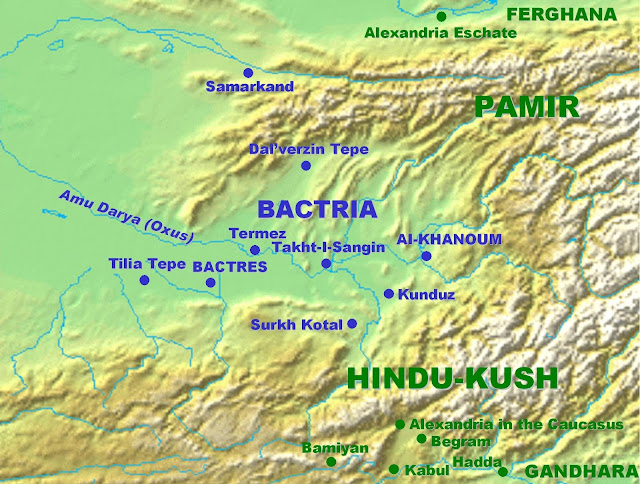 "The Siege of Bactra lasted from 208 to 206 BC. After defeating the Bactrians at the Battle of the Arius the Seleucids besieged the capital of Bactria until news from the west of his dominions and lack of progress against the city led Antiochus to negotiate peace with Euthydemus and lift the siege. In the peace that was agreed Antiochus recognized Euthydemus as an ally, and he gave one of his daughters as a wife to the Bactrian king."

"Bactrian campaign and Indian expedition of Antiochos III.......The year 209 BC saw Antiochus in Bactria, where the Greco-Bactrian king Euthydemus I had supplanted the original rebel. Antiochus again met with success.......Euthydemus was defeated by Antiochus at the Battle of the Arius but after sustaining a famous siege in his capital Bactra (Balkh), he obtained an honourable peace by which Antiochus promised Euthydemus' son Demetrius the hand of one of his daughters......Antiochus next, following in the steps of Alexander, crossed into the Kabul valley, reaching the realm of Indian king Sophagasenus and returned west by way of Seistan and Kerman (206/5). According to Polybius:.....'He crossed the Caucasus (Hindu Kush) and descended into India; renewed his friendship with Sophagasenus (Subhashsena in Prakrit) the king of the Indians; received more elephants, until he had a hundred and fifty altogether; and having once more provisioned his troops, set out again personally with his army: leaving Androsthenes of Cyzicus the duty of taking home the treasure which this king had agreed to hand over to him.".........Polybius 11.34, Antiochus Moves from Bactria Through Interior Asia 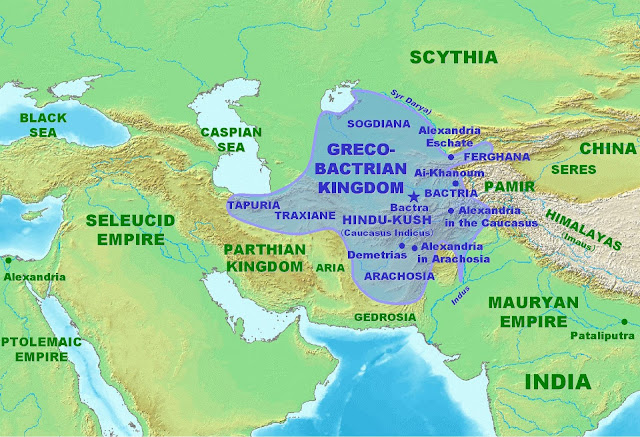 "From around 180 BCE the Greco-Bactrian ruler Demetrius, conquered the Kabul Valley and parts of northwestern India. Demetrius helped established an Indo-Greek kingdom from the Hindu Kush to Mathura, which was to last in parts until the end of the 1st century BCE, and under which Buddhism was able to flourish. In particular, one of the successors of Demetrius, the Indo-Greek "Saviour king" Menander (Pali: Milinda) was a strong benefactor of the Buddhist faith at that time.".....http://www.twcenter.net/forums/showthread.php?50541-Indian-faction/page4 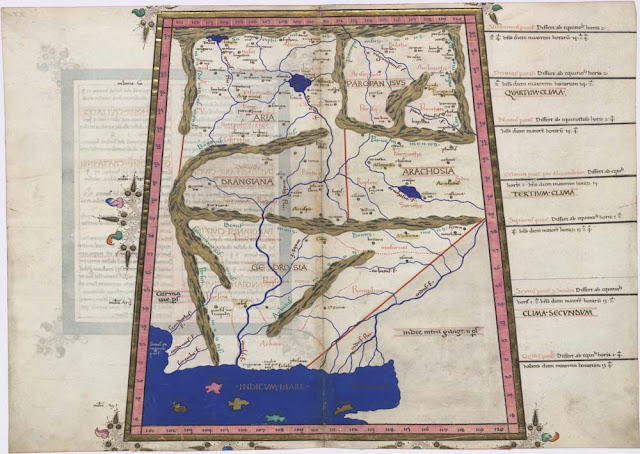 A 15th century reconstruction (by Nicolaus Germanus) of a 2nd-century map (by Ptolemy)....Click on the map to enlarge

"Paropamisadae (Greek: Παροπαμισάδαι) is the Bactrian pronunciation of the Old Persian word Para-upari-sena (I.e "beyond the raised land"), which was then hellenized by the Greeks to Paropamisus (Greek: Παροπαμισσός) and is the old Iranian word for the district of Gandhara in western Pakistan, centered upon the cities of Peshawar and Charsadda. Upari-Sena (I.e "raised lands"), in Old Persian, refers to the Hindu-Kush mountains. Para-upari-sena (I.e "beyond the raised lands"), refers to the Peshawar Valley which is situated immediately beyond these mountains and is the location of Gandhara.....The Paropamisadae was located north of Arachosia and Drangiana, east of Aria, south of Bactria, and west of Kashmir. There were two main rivers flowing through the land, the Coas or Cophen (Κωφήν) and the Dorgamanes (Δοργαμάνης) or Orgomanes (Ὀργομάνης) farther north......The major cities of the land were the city of Ortospana (Ὀρτοσπάνα) or Carura (Κάρουρα), probably identifiable with Kabul, Gauzaca (Γαύζακα), probably modern Ghazni, Capissa (Καπίσσα) in the northeast, and Parsia (Παρσία), the capital of the Parsii."