"Buddhaguptanatha (1514-1610 ?)...about 1580 AD Buddhaguptanatha locates Urgyan (Uddyana) in Ghazni, about 50 miles south of Kabul in modern Afghanistan, which is in contrast with the traditional location of Urgyan in the Swat area......Tāranātha (1575–1634) gives a detailed description of the country and Dumasthira, the capital city of Uddyana....the focal location of the magic dakini women...."

"Buddhagupta-natha travelled to Uḍḍyāna in the north-west and beheld many miracles. While there, he visited the capital Dhuma-sthira and many sacred sites in the surroundig regions, such as the place where there is a reflection in the shape of a horse, known to be an emanation of the Master Ashva-ratna (Paramaśva), the place were Master Lawapa threw back a rain of stones sent by the ḍākinīs, and the temple that houses the personal Heruka statue of Master Padma-vajra. He visited most of the places associated with the former Māha-siddhas of great fame.......Buddhagupta describes the women of Uḍḍyāna as being of the various types of ḍākinīs, all posessing different types of magical abilities. A girl that he met upon the road threw a handful of sand into a rivers water. The flow of the water was cut off and she crossed safely. Thereafter the water resumed its flow. Another woman transformed herself into a bat and flew off into the sky, later to land safely in a far-off field. However, Tāranātha muses whether or not such occurences might not be beyond the scope of vision of rather more ordinary beings. While in Dhuma-sthira, Buddhagupta experienced the occurrence of signs of success in his practice and for three days and nights everything shone forth as the maṇḍala of Vajrayoginī."..... http://rywiki.tsadra.org/index.php/Buddhagupta-natha 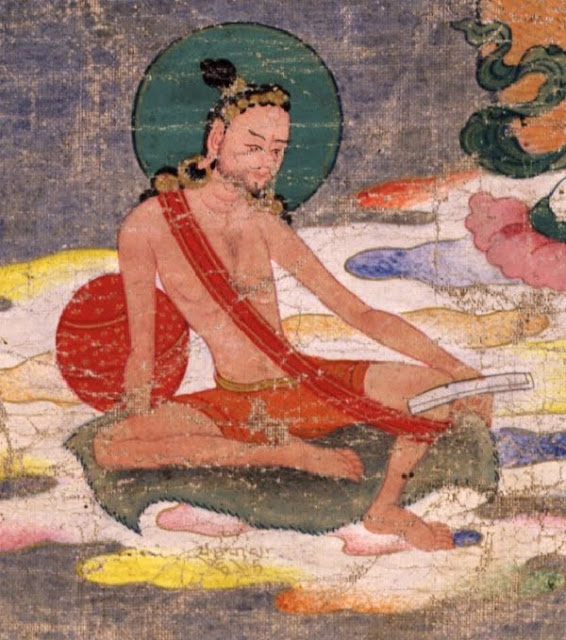 "Buddhaguptanatha was remarkable. He travelled on foot to Iran, Balkh in the north of Afghanistan, Kashgar in Central Asia, Multan, Kabul, Khorasan, Badakshan, Qusht and the lands of the Mughals....."....Buddhaguptanatha and the Late Survival of the Siddha Tradition in India.....by David Templeman

"Buddhaguptanatha (16th C. AD).....for example, unequivocally states that Oddiyana is located to the west of Swat, in the vicinity of Ghazni, 50 miles south of Kabul...."......Historical Dictionary of Tibet.....By John Powers, David Templeman...Page 489

"Buddhagupta natha was, we should first look at his name. While the Buddha part tells us something about his spiritual affiliation, it is the nath part that we should discuss first. He belonged to what is known as the ‘Nath’ or ‘Gorakhnathi’ tradition of Shiva worship......Naths tend to wear white clothing and are identified by what is called the kanphata, the split ear, with an ivory ring thrust into the lobe. Naths have a tremendous tradition of pilgrimage and of scholarship. They practise a type of Hatha Yoga which, in its externals, is similar to the Tibetan yogic tradition. The Nath understanding of the physical and psychological structure of the body is much the same as that found in Buddhist tantric practices, with its focus on the ‘moon channel,’ ‘sun channel,’ bindu drops, et cetera. .... 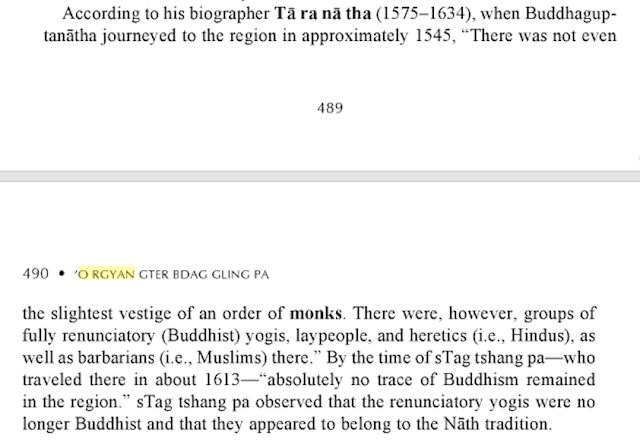 "The Nath tradition is a heterodox siddha tradition containing many sub-sects. It was founded by Matsyendranath and further developed by Gorakshanath. These two individuals are also revered in Tibetan Buddhism as Mahasiddhas (great adepts) and are credited with great powers and perfected spiritual attainment. Gorakhpur, Uttar Pradesh, India, is the centre of Nath sampradaya.....The establishment of the Naths as a distinct historical sect purportedly began around the 8th or 9th c. AD......Gorakshanath is considered by many to have been the most influential of the ancient Naths. He is also reputed to have written the first books dealing with Laya yoga and the raising of the kundalini-shakti......".....Mahendranath (1990), Notes on Pagan India......Historical Dictionary of Tibet.....By John Powers, David Templeman...Page 489 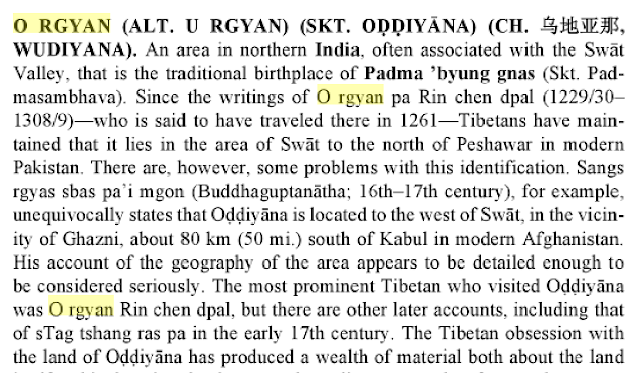 ".....about 1580 AD Buddhaguptanatha locates Urgyan in Ghazni, in modern Afghanistan, which is in contrast with the traditional location of Urgyan in the Swat area. Here, Taranatha gives a detailed description of the country and Dumasthira, the focal location of the magic dakini women:.....[Dumasthira]… is surrounded by mountains, valleys and dense forests and it sits in the midst of all of them. Going from east to west directly, it measures about two days’ journey and from south to north is about four days. Dumasthira is the only city in Urgyan. It’s the size of a small Indian city......There are four ways that lead out of the central area and the outer lands of Urgyan are also very extensive. It is in Muslim control, and even today, in the central part, there is not the slightest vestige of the order of Buddhist monks any longer. There are, however, groups of fully renunciate yogis, upasakas [lay people] and tirthikas [Jainas], as well as the Muslims there......It appears that most of the women of this town are of the dakini family and that they are fully accomplished in their spiritual practice. They are powerful in their exercise of mantras and they know how to both help and hinder with them. They are skilled in adopting various physical forms and they have the ability to work with the mystic gaze.....They displayed various magical abilities involving birds and my master, Buddhaguptanatha, saw these miracles with his very own eyes and he told me of them. He said that previously when he was in Upper Hor [Muslim territories]… he was fully protected by the mantras that he had received from those dakinis in Urgyan, as well as by his own physical powers. Urgyan is surrounded to the east, the south and the west by three large lakes. When he… crossed over the pass he came into the Hor Mleccha land of Balkh [northern central area of modern Afghanistan]......"Buddhaguptanatha and the Late Survival of the Siddha Tradition in India D Templeman 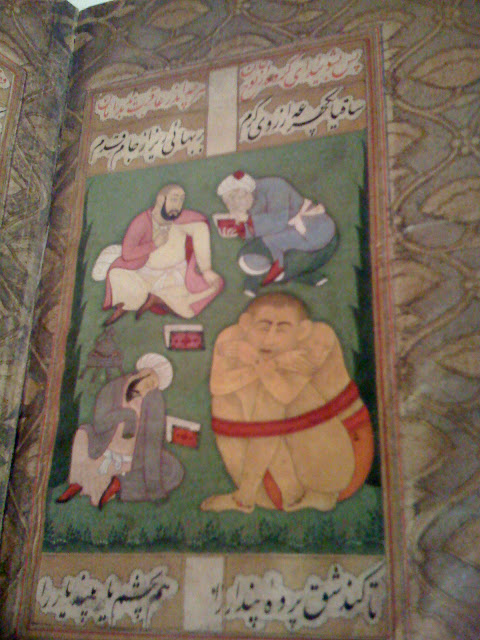 "... Above is a picture I took at an exhibition of Indian Sufi art titled Light of the Sufis: The Mystical Arts of Islam that was held at the Brooklyn Museum of Art from June to September of 2009......The painting depicts three sufi mendicants and one Buddhist yogin (practicing what I would assume is a Vajrayana completion-stage yoga based upon his asana as well as the use of the meditation belt)...... I was convinced that an interfaith meeting of some sort was underway...."..http://ganachakra.com/tag/buddhagupatnatha/.....Repa Dorje Odzer (Justin von Bujdoss) is the Co-Founder and Co-Executive Director of New York Tsurphu Goshir Dharma Center, the North American Dharma Center of His Eminence Goshir Gyaltsab Rinpoche. 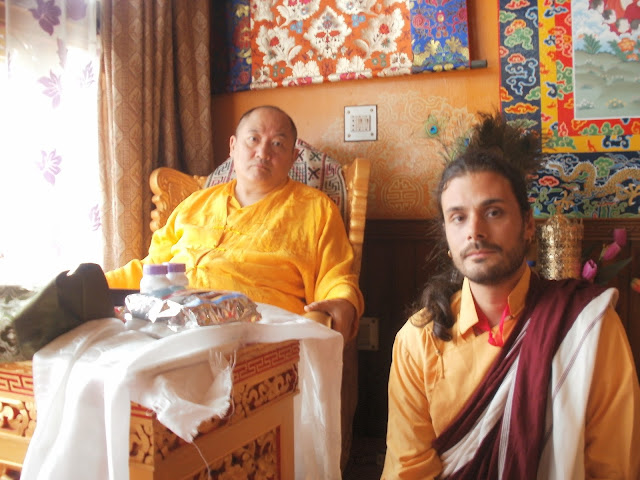 "I brought the Sufi image with me to India to show H.E. Gyaltsab Rinpoche as he has a passionate interest in history, especially regarding the overlap between Buddhism and Islam. By most accounts Vajrayana (tantric Buddhism) was born somewhere in or around the Swat Valley in northern Pakistan. Other portions of Pakistan, Afghanistan, and northern Central Asia figure largely in the development and dissemination of tantric Buddhism. Many great buddhist teachers spent time in this region- generally refered to as Uddiyana. Such illustrious figures include the Mahasiddhas Tilopa and Kambala, and more recently Orgyen Rinchen Pal (1230-1309 CE) who brought to Tibet a unique system of meditation based upon the Kalachakra Tantra. It is also said that Padmasambhava (Guru Rinpoche) was said to be born somewhere within the Swat valley- the same valley that over the past year has seen terrible devastation in relation to the war in Afghanistan......In response to the photo of the painting that I brought, H.E. Gyaltsab Rinpoche told me the story of a Buddhist teacher who was described in a historical treatise by Gendun Chophel. There was once a yogin (Rinpoche never gave the name) who wandered through Afghanistan and some of what is now Iran, and after some time started to teach. According to Rinpoche, this very realized teacher interchanged Buddhist philosophical terms such as Dharmakaya and nature-of-mind with Allah when he taught as a means to appeal to his audience. The sensitivity and depth of his teachings were eventually recognized by an elder Sufi teacher who came to name this Buddhist as his successor. "......Buddhism, Islam, and appearance....http://ganachakra.com/tag/buddhagupatnatha/........Repa Dorje Odzer (Justin von Bujdoss) is the Co-Founder and Co-Executive Director of New York Tsurphu Goshir Dharma Center, the North American Dharma Center of His Eminence Goshir Gyaltsab Rinpoche.

"Taranatha gives us a wonderful description of Dumasthira (the ‘smoky place’), which was the capital city of Urgyan. Urgyan has taken on an almost mythical quality over the centuries since yogi-siddhas first ‘colonised’ it in the 4th and 5th centuries. It is the site par excellence in siddha biographies. Here, we have a wanderer visiting it in about 1580 and still discovering its magical qualities! Buddhaguptanatha locates Urgyan in Ghazni, in modern Afghanistan, which is in contrast with the traditional location of Urgyan in the Swat area."....https://undumbara.wordpress.com/2009/05/07/buddhaguptanatha-and-the-late-survival-of-the-siddha-tradition-in-india-d-templeman/

"After this long and intense exposure to Shri Singha, Vairotsana was finally prepared to meet the adiguru of the Dzogchen tradition, the nirmanakaya emanation of Vajrasattva, Garab Dorje himself. This apocryphal encounter occurred in a cremation ground called Dumasthira, the place of fire and smoke, and Vairotsana emerged from the meeting with the transmission of the entire 6,400,000 Dzogchen verses and a body of light."......Original Perfection by Keith Dowman...Page 15

"...I am reminded of the story of Taranatha and one of his teachers named Buddhaguptanatha. Buddhaguptanatha (1514-1610? AD) was an Indian Buddhist yogin who also held and practiced several Hindu yogic traditions. Taranatha apparently discovered this fact while Buddhaguptanatha was in the midst of bestowing a series of empowerments that he himself had received from his guru, Shantigupta. Taranatha was particularly challenged by the idea that his teacher also practiced Hinduism. Sensing his student’s sectarian reaction Buddhaguptanatha became upset and abruptly left Tibet leaving the series of empowerments incomplete. It is humbling that even for a teacher as great as Taranatha, the notion of “pure” Buddhism being mixed with Hinduism was a challenge- that on some level his own sense of distinction got the better of him. ".....http://ganachakra.com/tag/buddhagupatnatha/.....Repa Dorje Odzer (Justin von Bujdoss) is the Co-Founder and Co-Executive Director of New York Tsurphu Goshir Dharma Center, the North American Dharma Center of His Eminence Goshir Gyaltsab Rinpoche. 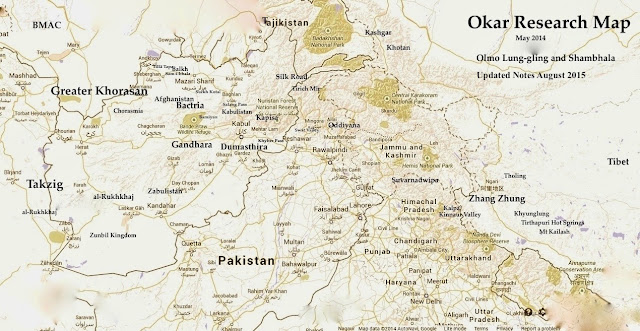